The State of American Stimulus

The recovery of the American economy from the COVID-19 crisis has been driven by unprecedented levels of stimulatory actions and spending. While the severity of the contagion was downplayed by politicians in its early days, March 2020 saw a near wartime mobilization of the federal government. Since the early days of the pandemic, over $12 trillion of legislative and Federal Reserve actions have been aimed at reducing the fallout of this public health disaster.1 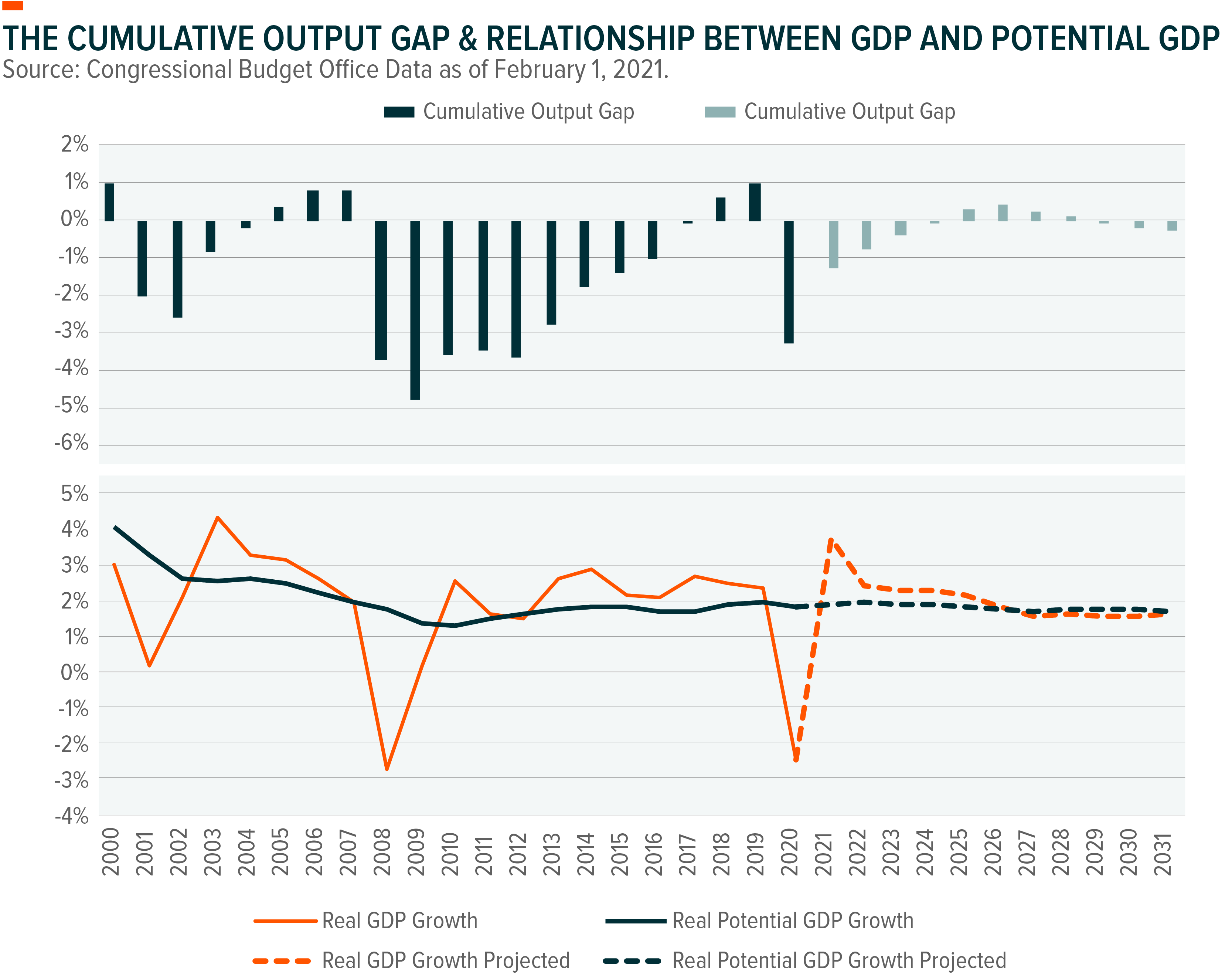 Of the $4 trillion in funding allocated by Congress in 2020, a staggering ~$1 trillion remained unspent prior to the signing of the American Rescue Plan.4 About 40% of this yet to be deployed cash was provided as part of the Coronavirus Response and Relief Act passed in December 2020, with the majority of funds allocated to Economic Injury Disaster Loans, the Paycheck Protection Program and Unemployment benefits that are expected to be paid out over time as need continues. 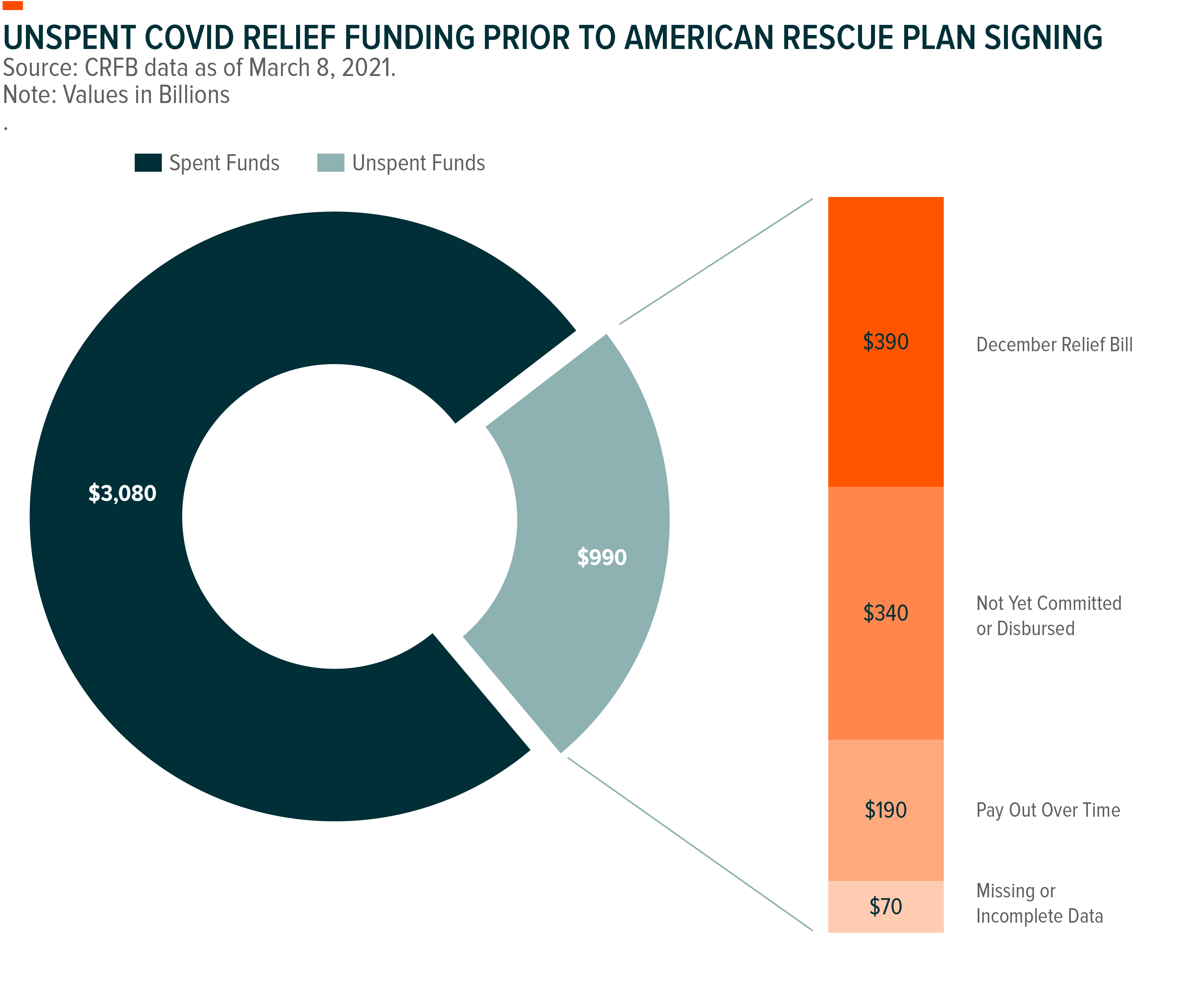 Fully Closed… And Then Some

With an output gap remaining, the Biden Administration determined a need for additional congressional spending. This manifested in the American Rescue Plan, which adds an additional ~$1.9 trillion of COVID support on top of the $4 trillion already authorized by Congress.

The plan aims to get the economy back on its feet. Data from the CBO, CFRB, and Brookings Institute shows the bill should accomplish this goal.5 In fact, depending on the economic multiplier achieved, the bill may overshoot the output gap by 100-300%. The CBO believes that COVID relief programs to date have seen multipliers ranging from 0.36x to .88x.6 At that level, $1.9 trillion of additional funding easily closes the $750 billion gap through 2023. 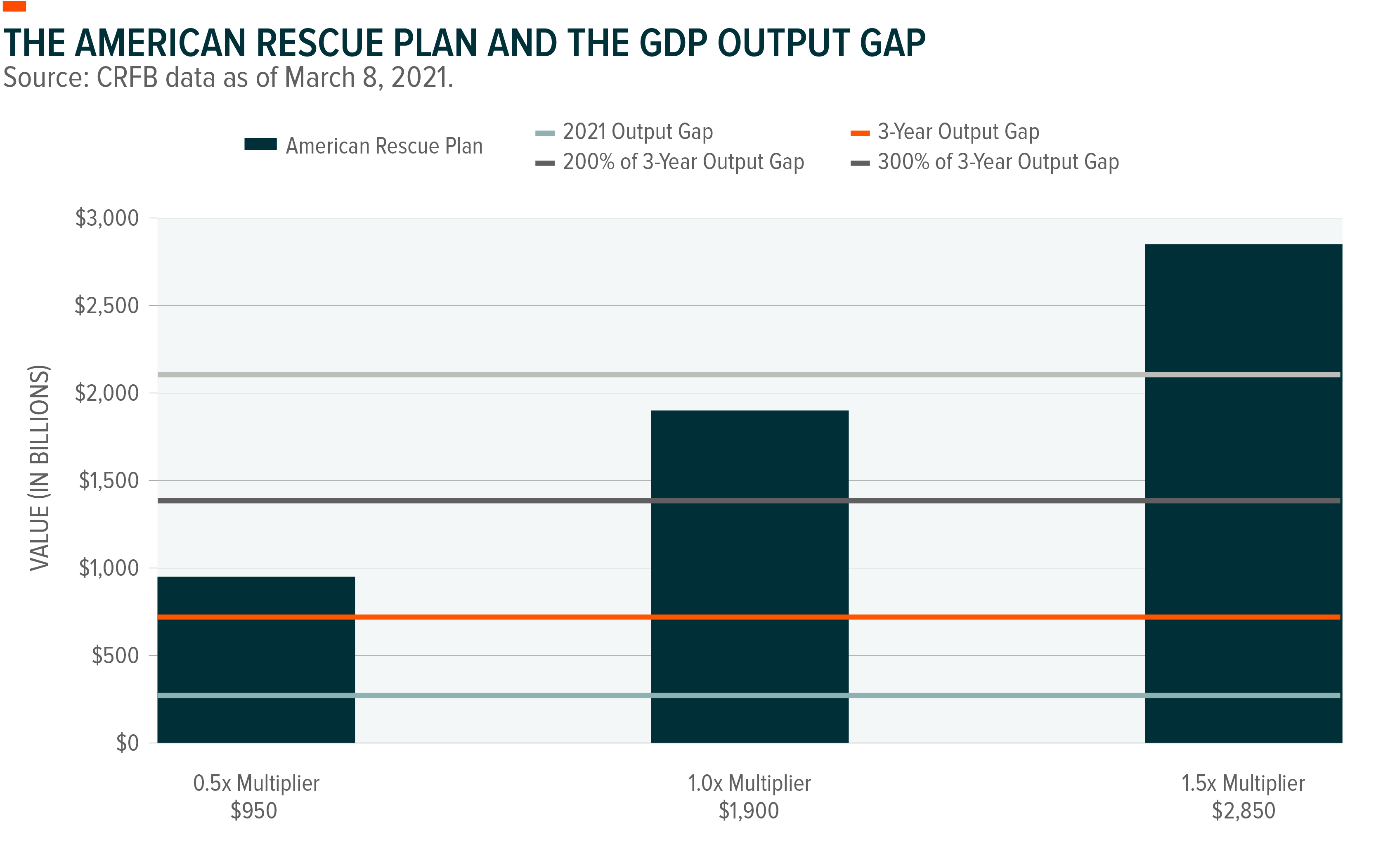 A collective $12 trillion of monetary and fiscal policy has been aimed at supporting the economy, providing the advantageous financial conditions needed to facilitate growth. The Federal Reserve now expects 2021 real GDP growth to be 6.5%, and 3.3% in 2022, well above the 4.2% projected for 2021 this past December.7 Fed Chair Jay Powell believes that it’s better to slightly overshoot on stimulus measures then to undershoot. In this vein, the American Rescue Plan fits the bill, fully to over funding the projected output gap. Additional stimulus measures may risk overheating the economy, increasing federal debt levels and potentially spiking inflation.

What comes next now that the shortfall has been covered? Conversations in Washington have shifted once again towards infrastructure, another of Biden’s campaign promises that comes with a price tag in the multi-trillions. While the country has delayed infrastructure investments for too long, additional spending in the current environment risks further heating the economy.

The need for infrastructure spending, especially on traditional hard assets like roads, bridges, tunnels and water management resources is clear. The U.S. places 13th in the world when it comes to infrastructure quality, slightly lagging the high-income country group average across both transport and utility rankings.8 Total public investment fell by $9.9 billion in real terms between 2007 and 2017, while maintenance spending grew to account for 60.5% of every dollar spent, further illustrating the growing need for significant upgrades.9

It’s difficult to say how hot the economy will run on the back of infrastructure funding. If passed, the determining factor will be the speed with which the projected $2+ trillion is spent. Historically, 52.2% of spending on public infrastructure projects over $10 million in size occurs within the first year, while economic multipliers can be as high as 2x, greatly increasing economic output for each federal dollar spent. Real GDP gains per trillion spent over ten years may raise growth by 0.2% in the first year, followed by 0.1-0.2% in each subsequent year before accounting for economic interaction effects.10

In short, economic growth is likely to spike in the near term, seeing GDP rise by as much as 0.4% in the first year. Stimulus fueled growth looks to greatly exceed long run GDP, reversing the COVID output gap and eventually needing to be offset by monetary and fiscal tightening measures.

As Congress allocates funding towards necessary investments, we hope the risks of additional spending will be recognized. Preventing an overheating scenario may just put an end to the recovery. Removing stimulus may be painful. Even gradual tapering can spark large reactions as investors look to get ahead of a regime change. With the output gap closed, the state of our stimulus actions looks strong, perhaps a bit too strong.

Economic Multiplier: The output produced for each dollar spent of funding.