Editor’s Note: Please see the glossary at the end for all terms highlighted in sea green found in the order that they appear.

As interest rates continue to rise off historically low levels, a key concern for income investors is how to generate income while also minimizing principal losses on their investments. A common approach is to pare back on fixed-rate securities, which tend to have more interest rate sensitivity, known as duration. Instead, investors today are favoring floating or variable rate issues. These securities offer both lower duration risk and the potential for higher dividends and coupons as rates rise.

What Are Variable Rate Preferreds?

In contrast to this, floating rate preferreds pay adjustable dividends for the life of the preferred security or a minimum rate (‘floor’). The dividends adjust on a set schedule, typically every 3 or 6 months.  The dividend payment is commonly determined by the 3-month London Interbank Offered Rate (LIBOR) – or an alternative such as a Treasury yield or SOFR (Secured Overnight Financing Rate) – plus a fixed spread, which is primarily a reflection of the issuer’s credit risk.3 As interest rates rise, so too should the dividend payment amount to investors, unless it’s subject to a minimum rate that is above the interest rate plus spread. Conversely, if rates fall, the dividend should decrease.

LIBOR is in the process of being discontinued due to concerns over past manipulations of rate setting. New issues of floating rate securities will be based on alternative reference rates and existing securities will gradually transition from LIBOR to alternative rates, such as SOFR. This transition has been underway for several years and central banks, regulators, and company executives have been working toward a smooth and orderly transition to the new reference rates.

On floating rate preferreds, it is worth noting that currently this pocket of the market is very small, with only 11 securities currently in the S&P US Floating Rate Preferred Index.4 Also, while these securities have negligible duration risk, the tradeoff is the elevated credit risk they carry, due to the potential for rising coupon payments. As we can see below, eschewing duration risk doesn’t necessarily equate to outperformance in a rising rate environment. 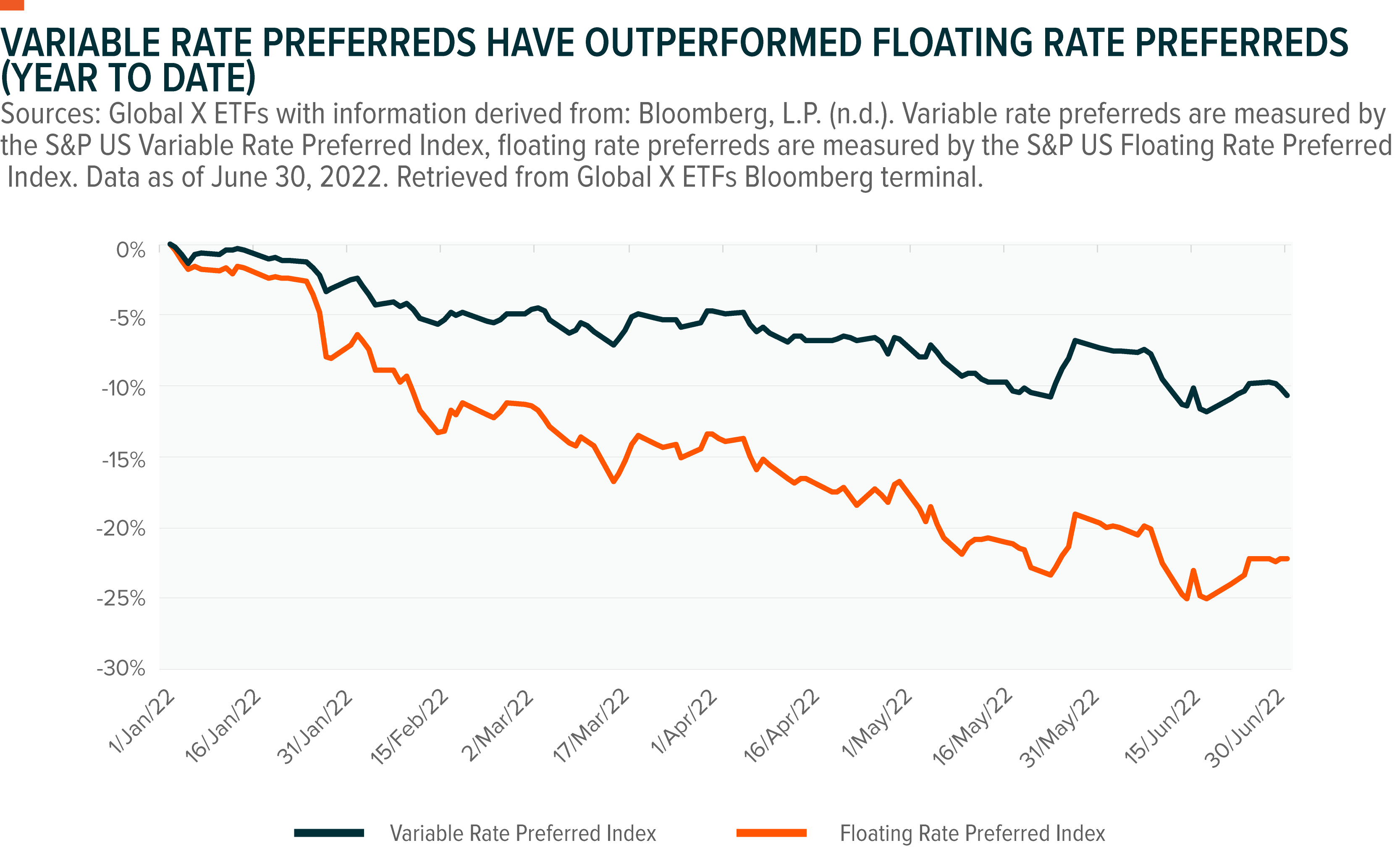 Variable rate preferreds often have features that are not common in other types of securities. For example, variable rate preferreds typically have a call option when they switch from paying fixed rate dividends to floating rate dividends. This option allows the issuer to buy back the preferred at a predetermined price, typically at or just above par value. As a result, the price of these securities reflects the yield offered and the risk of them being called. The yield on these securities is usually higher than securities without this feature, to compensate investors for this embedded call risk. For investors, this means the ‘yield to worst’ metric is important in assessing relative valuations of variable rate preferreds as this incorporates the risk of the security being called.

The below chart shows variable rate preferreds yield to worst over time, and the underperformance in 2022 so far has resulted in yields now being higher than their long-term average of 4.74%. 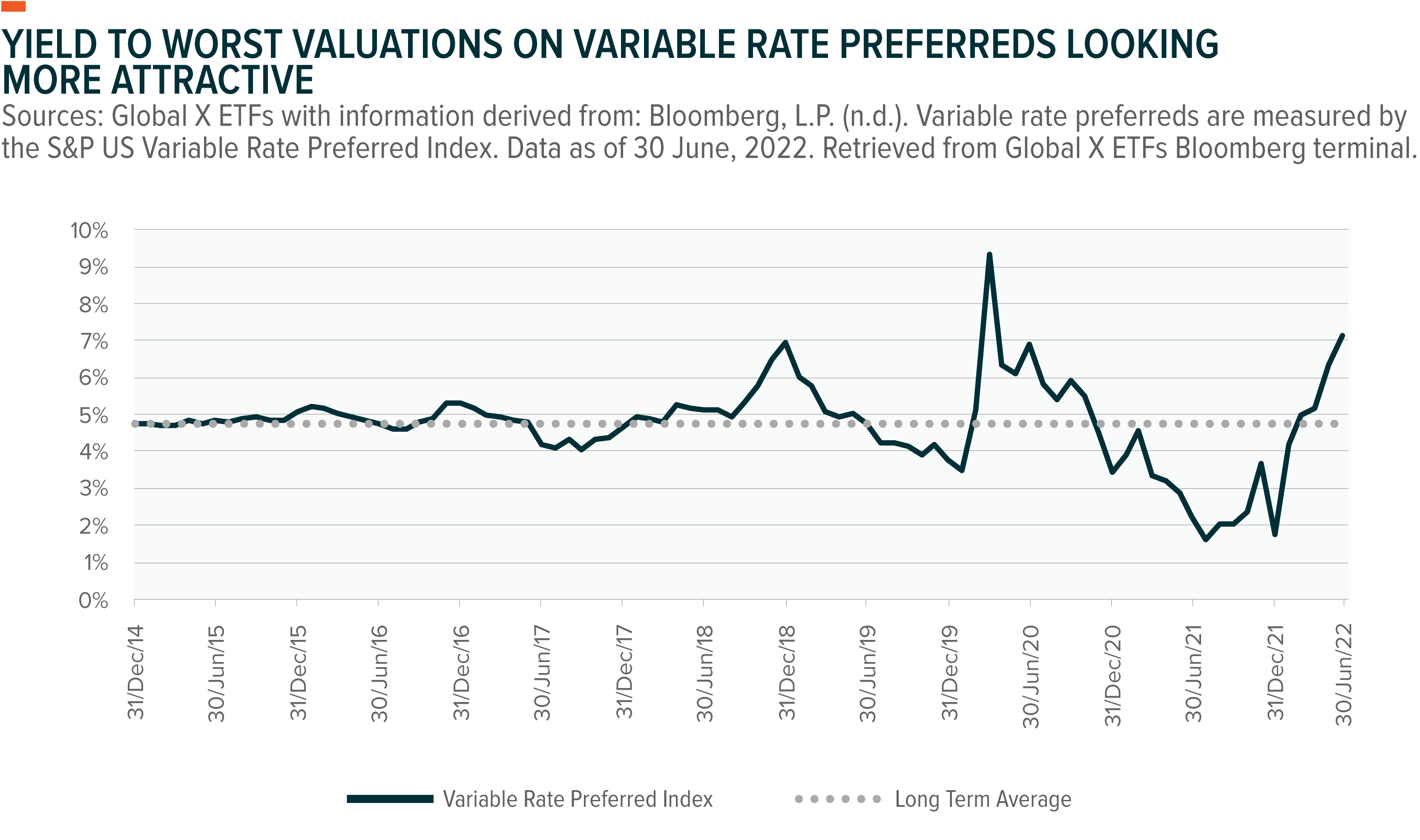 With interest rates rising, this makes re-financing less attractive to companies that use debt or preferred shares for financing, as interest costs are likely to get higher. We view this as one reason that preferreds, which have a call option, are now less likely to be called by issuers. Following the Global Financial Crisis, preferred issuance has tended to have a close relationship with the direction of interest rates. Issuance is greater when rates fall because yields are lower, resulting in a lower cost to issuers.

For example, less issuance occurred in periods of rising rates like 2016–2018 and so far in 2022, while more issuance occurred in periods of falling rates like 2014–2015 and 2019–2020. In 2021, preferred issuance was high despite U.S. interest rates rising. However, we attribute the high issuance to the very low relative level of interest rates and very tight credit spreads resulting in a still-attractive environment for companies to issue capital. In the first five months of 2022, issuance was much lower than the 2019–2021 period. From a simple supply-demand view, less supply should balance preferreds’ prices.

Variable rate preferreds had positive performance returns in all the periods that we analyzed, and on average they outperformed the two other asset classes that we selected. 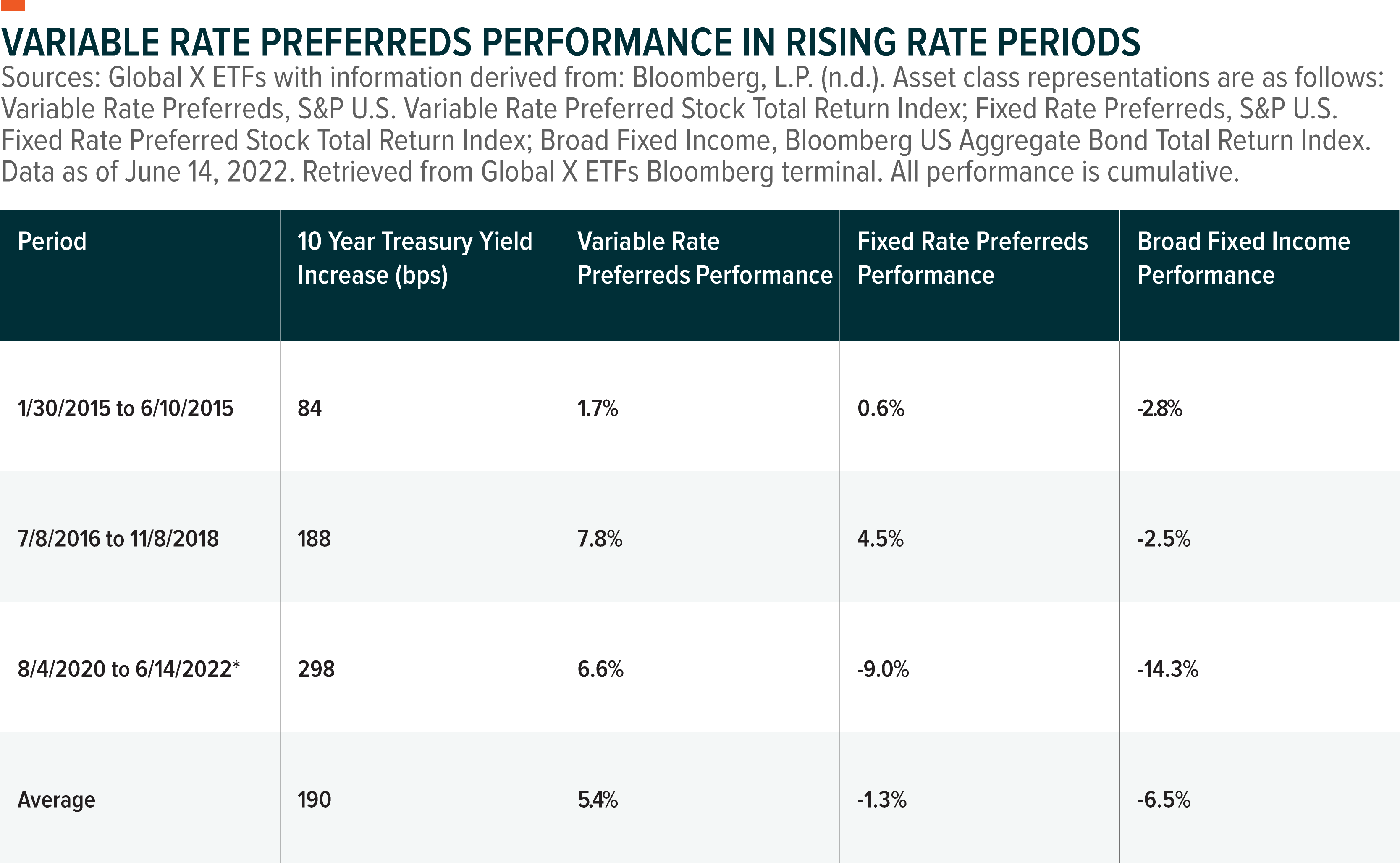 *Note: this period we have identified is the current period to date.

To gauge duration risk, it is also important to understand the time frames for fixed-to-floating preferreds to switch to floating rate securities. Issuance of these securities has not been uniform over time. A large proportion of variable rate preferreds were issued with 5-year and 10-year fixed rates in 2013/2014 and 2018/2019, when interest rates were low. The chart below shows a large proportion of securities switching to floating rate in 2023 and 2024. 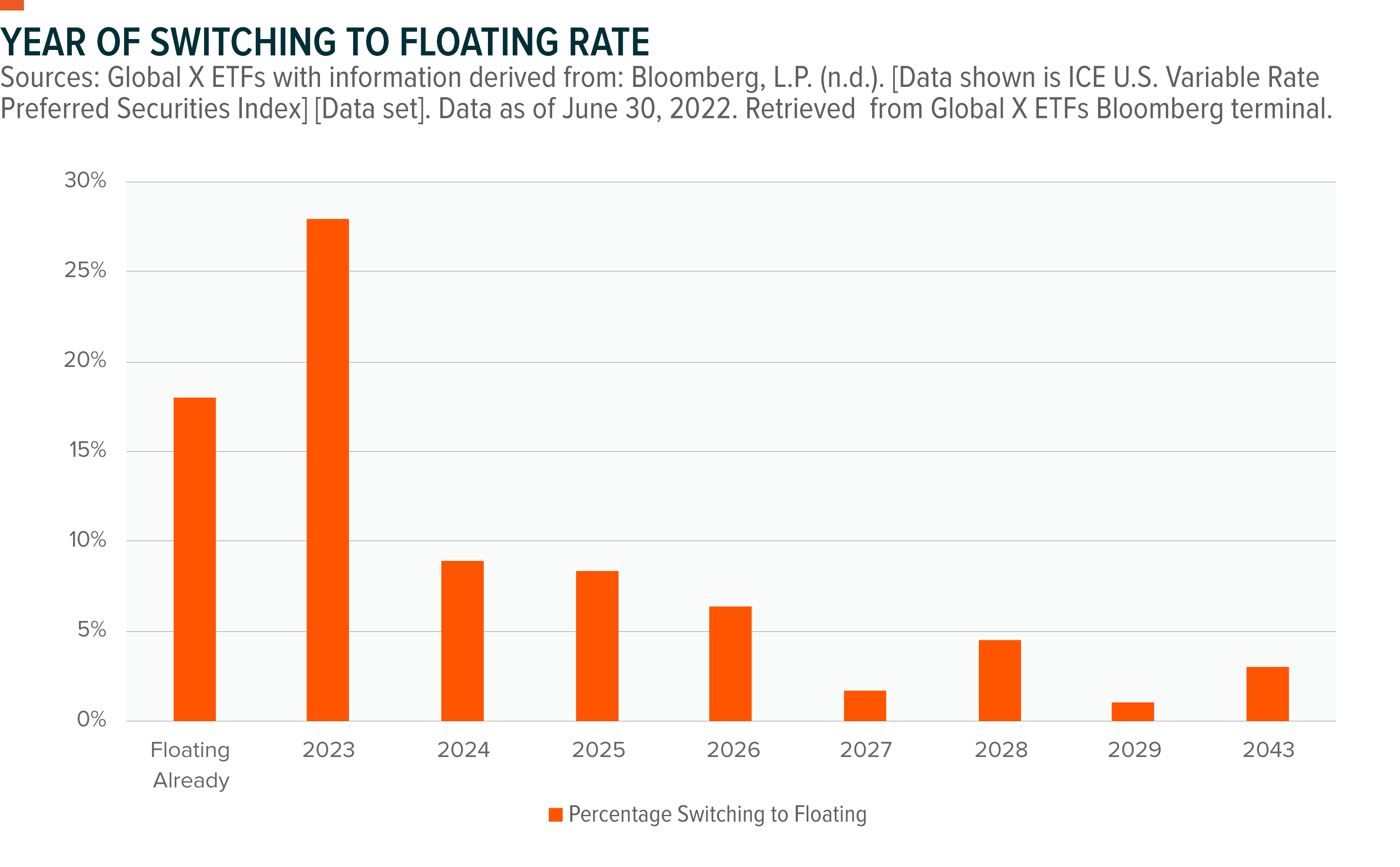 Variable rate preferreds have several key attributes that may make them an attractive asset class to include in a portfolio.

Variable rate preferreds historically offer a high yield compared to other income producing assets, as seen in the chart below. 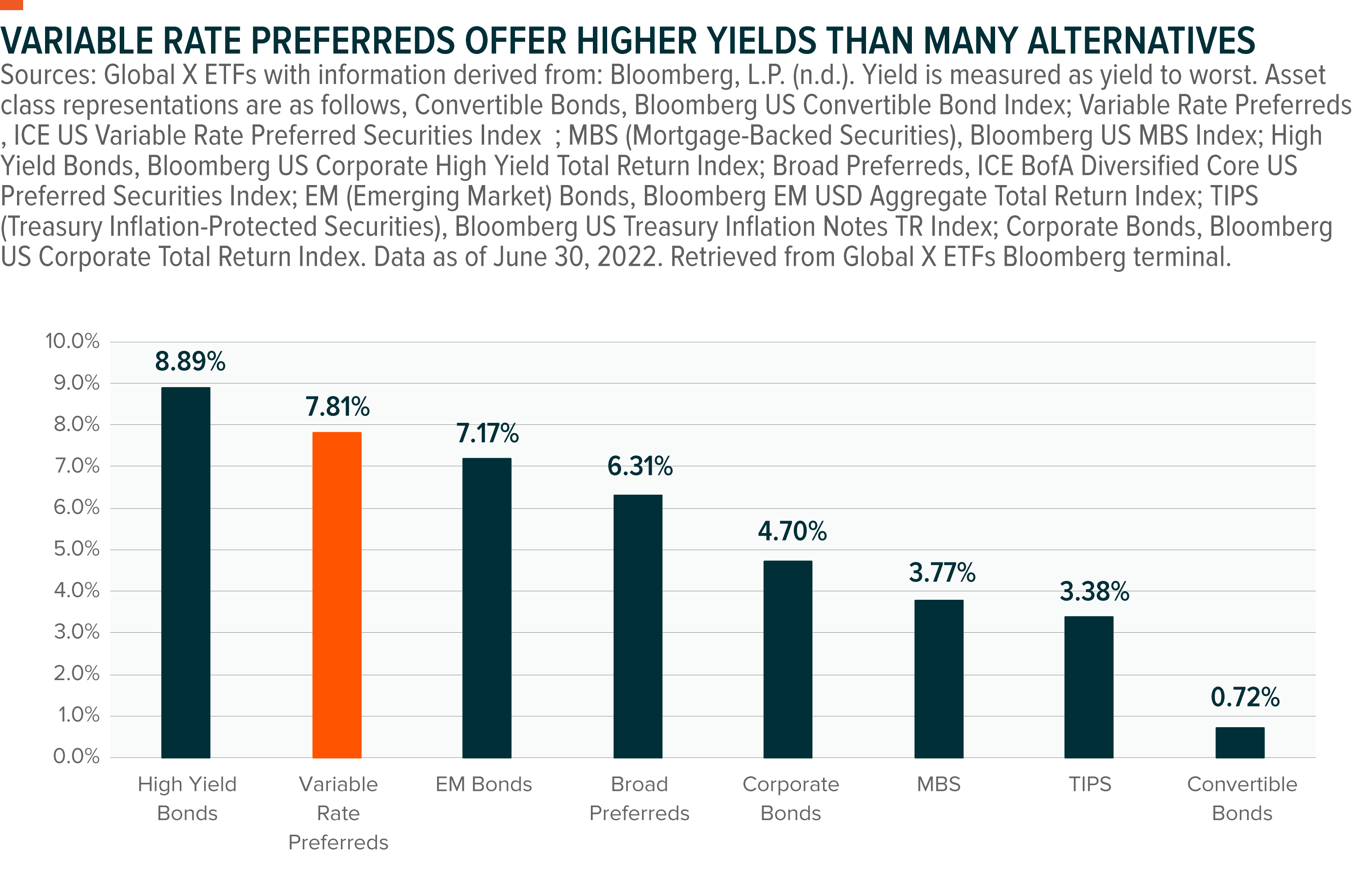 As discussed earlier, variable rate preferreds have performed well in rising rate environments due to their low duration. 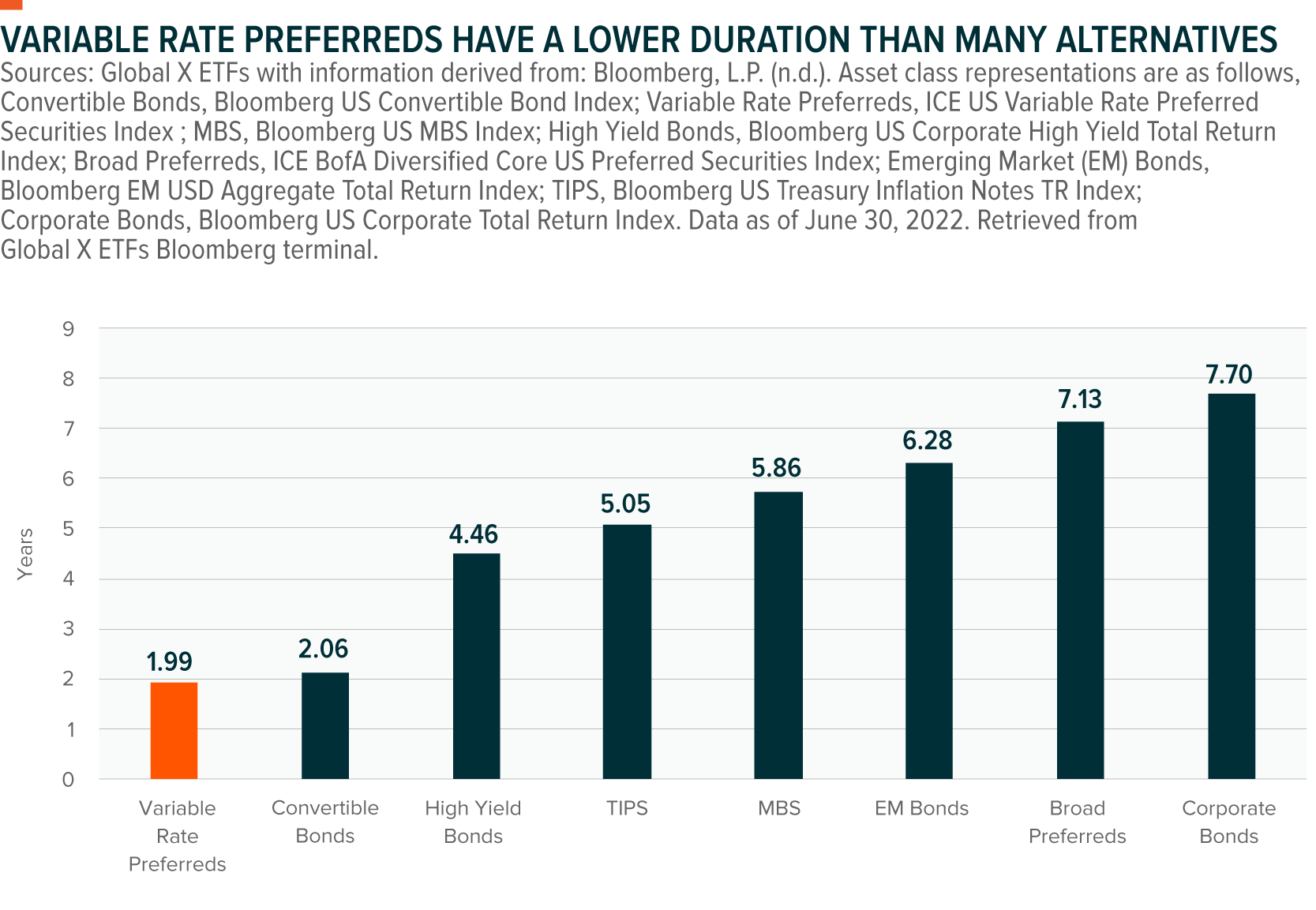 Variable rate preferreds can be used within an existing fixed income allocation due to their relatively low correlation to traditional bonds. For fixed income portfolios consisting of assets like floating rate bonds and TIPS, variable rate preferreds can be added to a portfolio in an effort to both increase portfolio yield and provide diversification benefits due to the low correlations seen in the figures below. 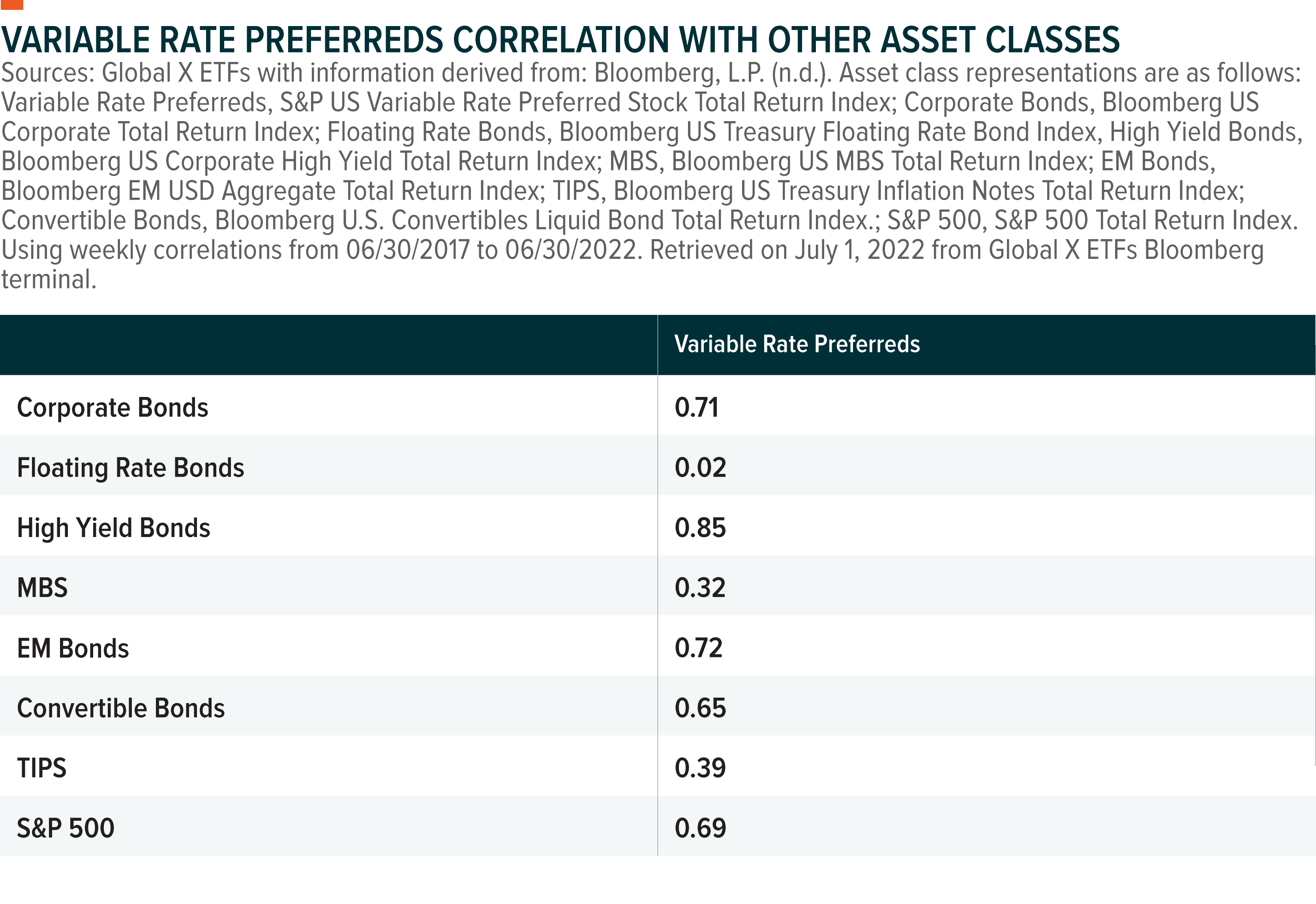 The current macroeconomic environment of high and persistent inflation has seen the US Federal Reserve (Fed) and other central banks hike interest rates, and consequently many fixed income investments fall sharply in value in 2022. Interest rate risk has therefore become a large consideration for investors still wanting to achieve a high level of income on their portfolios. We view the interest rate hiking priced in by markets as aggressive and leaves some upside risk to income investors if inflation starts to recede, or if the US Fed believes it needs to slow down on raising rates. We have a positive outlook on variable rate preferreds given the attractive yields they now offer as well as a low duration profile.

Financial services companies like major banks, which are large issuers of preferreds, generally have strong balance sheet positions, and regulators such as the Fed sign off on the overwhelming majority of banks’ capital ratios. In June the 2022 Federal Reserve Stress Test Results were released, showing that the 33 largest banks which were subject to the stress test all had more than sufficient capital levels for the stressed scenario.6 Following the Global Financial Crisis, banks have been improving their capital ratios over time, and there have been few issues with companies in this respect. The average S&P issuer credit rating for US Financials is A, which highlights the financial strength of these companies at the issuer level.7

Duration: A measure of a bond’s price sensitivity to changes in interest rates.

Yield to Worst: A measure of the lowest possible yield that can be received on a security operating within the terms of its contract without defaulting. For bonds or preferred shares with embedded call options, yield to worst is the lower of yield to maturity or yield to call. Yield to call is the yield earned by an investor if the security is called by the issuer when first eligible.

Investing involves risk, including the possible loss of principal. PFFV, PFFD and SPFF are non-diversified. International investments may involve risk of capital loss from unfavorable fluctuation in currency values, from differences in generally accepted accounting principles or from economic or political instability in other nations. Preferred stock is subject to many of the risks associated with debt securities, including interest rate risk. In addition, preferred stock may not pay a dividend, an issuer may suspend payment of dividends on preferred stock at any time, and in certain situations, an issuer may call or redeem its preferred stock or convert it to common stock. High yielding stocks are often speculative, high-risk investments. These companies can be paying out more than they can support and may reduce their dividends or stop paying dividends at any time, which could have a material adverse effect on the stock price of these companies and the Fund’s performance.

Variable and Floating Rate Securities may have limits on the maximum increases in coupon rates and may lag behind changes in market rates. A downward adjustment in coupon rates may decrease the Fund’s income as a result of its investment in variable or floating rate securities. Performance of companies in the Financials sector may be adversely impacted by many factors, including, among others, government regulations, economic conditions, credit rating downgrades, changes in interest rates, and decreased liquidity in credit markets.

This material represents an assessment of the market environment at a specific point in time and is not intended to be a forecast of future events, or a guarantee of future results. This information should not be relied upon by the reader as research or investment advice regarding the funds or any security in particular. Diversification does not ensure a profit nor guarantee against a loss.