What 4G’s Run Can Teach Us About the 5G Future

From Seoul to Geneva and Chicago, network operators worldwide began launching the first commercially-available 5G mobile networks in 2019, promising faster speed, greater capacity, and lower latency. While the rollout will take years before it becomes nearly ubiquitous, the new mobile standard could have a transformational impact on industries that provide 5G connectivity, supply 5G-related hardware, or build devices and services that fully leverage its new capabilities.

Given mounting excitement around this leap in wireless technology, there is growing interest in identifying the companies best positioned to benefit from the rise of 5G. Yet while 5G’s impact will be felt across multiple segments, helping to reinforce the disruptive nature of this theme, it also muddies the picture for which companies are the most sensitive to its rise. To better understand which segments may be the biggest beneficiaries of the 5G rollout, we examined the historical evolution of 4G for clues.

A brief background on 4Gi

The first 4G services came online in the early 2010s, first in Scandinavia and then trickling to the United States, Asia and the rest of the world. 4G became a foundational technology on which the smartphone revolution was built, leading to the ‘there’s an app for that’ mentality that powered photo sharing, video streaming, social media, e-commerce and other mobile applications to become a part of our daily routine.

4G was ultimately a monumental leap in terms of network capabilities but required substantial investment to realize. Estimates suggest that between 2012 and 2018, mobile operators globally spent well over $1 trillion in capital expenditures to upgrade their networks.1 By 2017 when 4G networks had achieved some degree of scale, mobile technologies and services accounted for 4.5% of global GDP, or $3.6 trillion in economic value added, illustrating the incredible contribution of the 4G value chain to the global economy.2 This share is expected to grow even larger in the years ahead as 5G emerges.

The segments at play

4G’s rise has undoubtedly had a lasting impact on the various industries and technologies involved, from network builders to the creators of end-user applications and devices. Recognizing that no segment is 100% linked to 4G, we examine the performance of various 4G-related segments from 2012-2019 to see how they fared in this era of increasing network connectivity, including:

A look at the rise of 4G and segment performance

To better understand market dynamics over the course of 4G’s global rollout, we explore differences in total returns, annual returns and correlations among the key segments identified above from the beginning of 2012 to the end of Q1 of 2019. By 2012, several commercial 4G services had been launched, including in the US and Europe; however, 4G connections still accounted for less than 1% of total connections globally.3 Over the course of the next few years, 4G would grow rapidly, reaching 29% of total connections by 2017 with an expected 53% penetration rate by 2025. Accordingly, we evaluate the market performance of the 4G value chain from the very early days of global adoption to the initial launches of 5G commercial services in 2019. 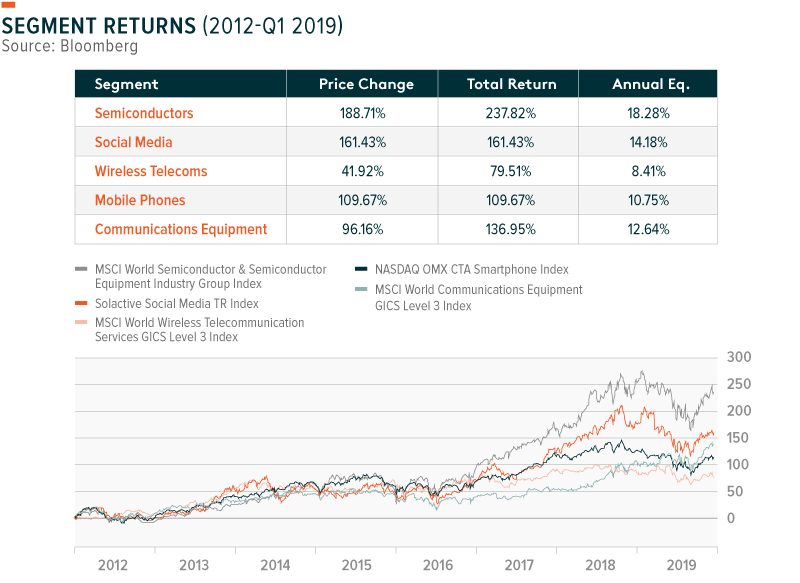 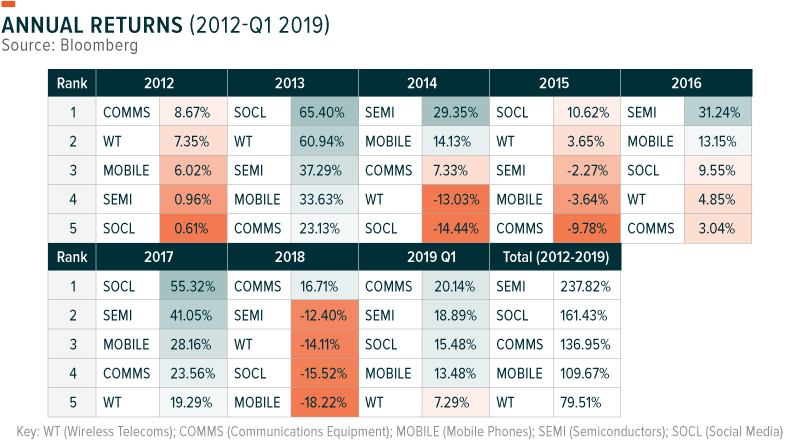 Lessons learned on the eve of 5G

When considering the investment opportunities associated with the ongoing rollout of 5G networks, we believe there are several key lessons learned from the era of 4G: 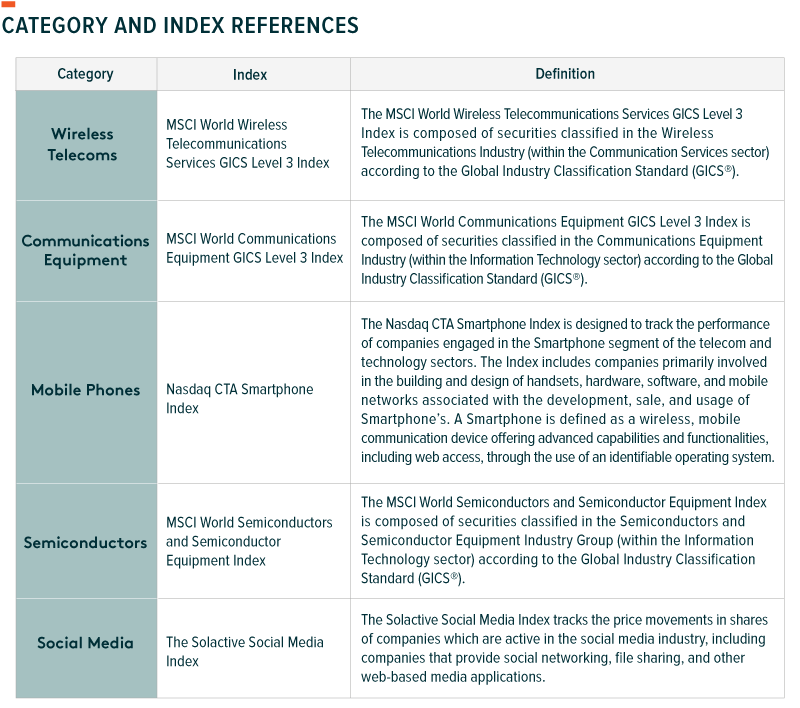 i. There is often some conflation between 4G and 4G Long Term Evolution (LTE). Given that each generation is determined by a collection of radio standards, the speeds initially prescribed by 4G were often unmet in practice. A common analogy is that just because a car can achieve speeds greater than 100 mph does not mean it will always drive that quickly. 4G LTE served as a workaround that let telecom operators claim the 4G moniker while signaling progress towards the outlined standards. In this blog post, we refer to 4G to describe both 4G and 4G LTE.

Investing involves risk, including the possible loss of principal. The investable universe of companies in which the Fund may invest may be limited. The Fund invests in securities of companies engaged in Information Technology which can be affected by rapid product obsolescence, and intense industry competition. In addition to normal risks associated with investing, international investments may involve risk of capital loss from unfavorable fluctuation in currency values, from differences in generally accepted accounting principles or from social, economic or political instability in other nations. The fund is non-diversified which represents a heightened risk to investors.