YieldCos are an emerging asset class of publicly traded companies that are focused on returning cash flows generated from renewable energy assets to shareholders. These assets largely consist of solar and wind farms that have entered into long-term energy delivery contracts with customers. Many YieldCos are able to distribute a high percentage of their cash flows by utilizing tax incentives to minimize tax liabilities. As of January 2016, there were 20 publicly traded YieldCos, 16 of which had IPO’d since the beginning of 20131.

What are the Potential Advantages of Investing in YieldCos?

What are the Potential Risks?

What is a YieldCo’s Structure?

A YieldCo is created when an energy company (the “parent”) spins off a completed renewable energy project or number of projects that have begun producing stable cash flows. In most cases, the parent company continues to hold a majority interest in the YieldCo and sells a minority stake to public shareholders in an initial public offering. 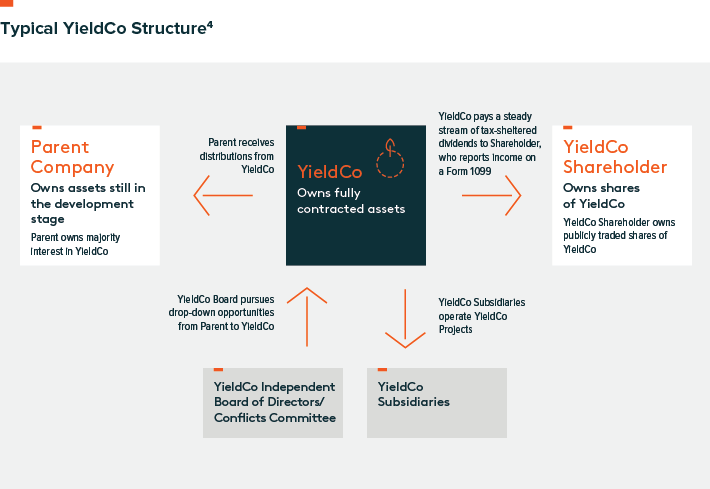 Most renewable energy projects do not generate taxable income for years after they begin operations because depreciation expenses exceed revenues. Based on current tax laws, in instances where a YieldCo is able to offset all revenues with depreciation expenses, it will not owe corporate taxes. In addition, excess depreciation beyond current year revenues can be carried forward for up to 20 years as a tax-loss carryforward, which can be used to offset future tax liabilities. YieldCos will typically continually acquire new assets in order to maintain high annual depreciation expenses.

Without current-year earnings, cash distributions to shareholders are considered a return of capital. Return of capital lowers the cost basis of an investment and is taxable at the capital gains tax rate upon sale of the shares.

How do YieldCo’s Compare with MLPs?

In many respects, YieldCos mirror the investment characteristics of midstream-energy MLPs. The table below highlights the similarities and differences between the two structures5: 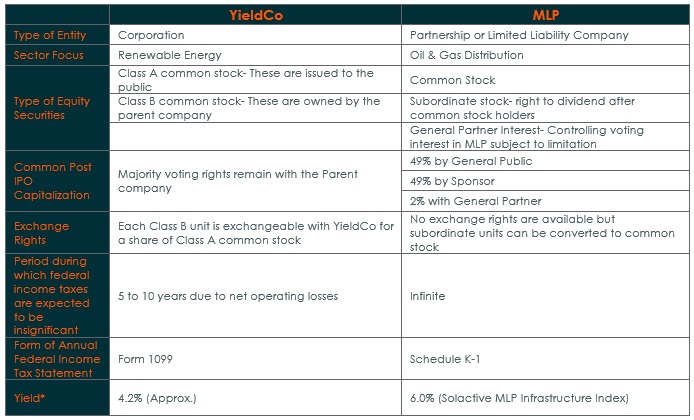 2. 3 of the 20 YieldCos had not IPO’d prior to Q4 2014, and therefore distribution growth for these YieldCos is not included in the analysis

Investing involves risk, including the possible loss of principal. In addition to the normal risks associated with investing, investments in smaller companies typically exhibit higher volatility. The value of securities issued by companies in the energy sector may decline for many reasons, including, without limitation, changes in energy prices; international politics; energy conservation; the success of exploration projects; natural disasters or other catastrophes; changes in exchange rates, interest rates, or economic conditions; changes in demand for energy products and services; and tax and other government regulatory policies.

Investments in securities of yieldcos involve risks that differ from investments in traditional operating companies, including risks related to the relationship between the yieldco and the company responsible for the formation of the yieldco (the “Yieldco Sponsor”). Yieldco securities can be affected by macro-economic and other factors affecting the stock market in general, expectations of interest rates, investor sentiment towards yieldcos or the energy sector, changes in a particular issuer’s financial condition, or unfavorable or unanticipated poor performance of a particular issuer (in the case of yieldcos, generally measured in terms of distributable cash flow). Prices of yieldco securities also can be affected by fundamentals unique to the company, including earnings power and coverage ratios. Yieldcos may distribute all or substantially all of the cash available for distribution, which may limit new acquisitions and future growth. Yieldcos may finance its growth strategy with debt, which may increase the yieldco’s leverage and the risks associated with the yieldco. The ability of a yieldco to maintain or grow its dividend distributions may depend on the entity’s ability to minimize its tax liabilities through the use of accelerated depreciation schedules, tax loss carryforwards, and tax incentives.

This information is provided for educational purposes only and is not intended to be individual or personalized investment or tax advice. Please consult a financial advisor or tax professional for more information regarding your tax situation.