What is Europe Going to do this Winter with Less Gas?

At the onset of the war in Ukraine, Russia provided 40% of Europe’s natural gas.1 Due to Russia’s invasion of Ukraine, the EU committed to reduce gas imports from Russia by 2/3 within the year while European Union leaders agreed in principle to block 90% of Russian imports of oil by the end of 2022.2 The logistics and practicality of such a shift is not easy given each European country has varying degrees of reliance on Russia’s energy exports. While some countries in the EU would prefer an outright ban, others disagree, creating a rift among member nations. The chart shown below depicts the percentage of natural gas imports originating from Russia (in blue) and the total percent of energy produced from Russian natural gas (in orange) within each of the listed countries.

As European countries attempt to decouple from Russian energy alternative energy options include increased use of coal or increased imports of LNG (liquified natural gas). Both options do not entirely pick-up the shortfall. For example, Germany doesn’t have enough operational coal power plants and LNG infrastructure will take years to build. An obvious solution may come from imports of energy from France given their large nuclear capacity and energy surpluses. While this would provide an optimal solution, France’s nuclear reactors are currently operating at less than 50 percent of full capacity producing the least amount of energy, seasonally adjusted, since 2008.3 The reactors are down due to maintenance and may come back online in several months.

Most of the solutions required to wean Europe off Russian Gas and Oil require infrastructure builds for clean energy options and construction of LNG plants, both which will take years to develop with much required funding. Other landlocked European countries face unsurmountable challenges for LNG as a solution. New pipelines can be built to reroute natural gas from non-Russian sources, but capex and time are the challenges.

So, what does this all mean? Certain countries possess the ability to move away from Russian fossil fuels faster than others, but most EU members will struggle to do so in the short term. Either Europe or Russia may cut off Energy this winter, solutions must be found for stability, but there are no quick and immediate options, thus it may be a long cold winter in Europe. 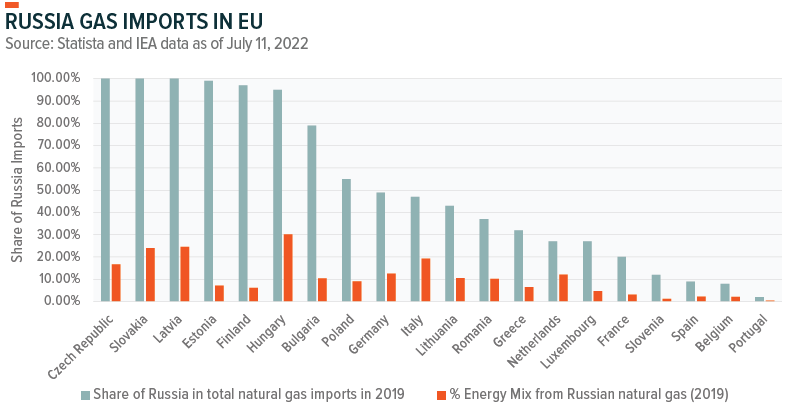