What’s at Stake in Latin American Elections in 2018

It is a critical year for elections in Latin America (“Latam”), with the three largest countries by population holding major votes before year-end. In an effort to shed more light on the impact of this election cycle, we will write a series of pieces covering the potential impact on local economies and the investment climate. In the table below, we enumerate the concerns and opportunities at stake across the major Latam elections this year. 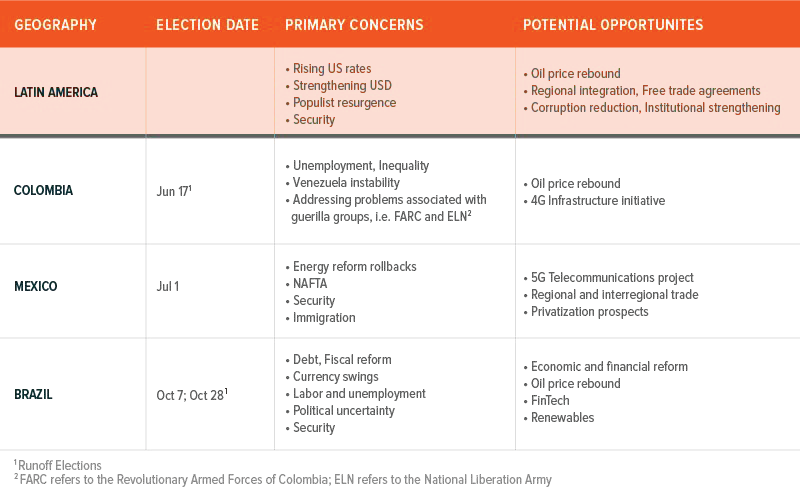 Commodity Price Fluctuations: The major Latin American countries with upcoming elections are especially susceptible to commodity price fluctuations. Rising oil prices should generate additional revenue and appreciate local currencies for oil-producers like Colombia. For Mexico, the situation is more complex as fully capitalizing on higher prices will be tied to the continued implementation of the country’s 2013 energy reform, which could be affected by election results. While Colombia, Mexico, and Brazil have worked to diversify their economies to buffer against the cyclicality of commodity prices, their economic growth remains closely tied to commodities.

Trade and Regional Integration: NAFTA and impending trade wars are expected to play a central role in Latin American politics. Although Mexico is the only Latin American country participating in NAFTA, the entire region could be affected by the negotiation’s outcomes. While US-Latam relations may sour as tensions flare, it could create opportunities to forge new economic ties. This includes developing trade partnerships within and outside of the region, such as bilateral agreements between Mexico and Brazil, regional customs unions or trade blocs like Mercosur and the Pacific Alliance, or across global regions with the Comprehensive and Progressive Agreement for Trans-Pacific Partnership, commonly referred to as CP TPP.

Election Uncertainty: A series of more pronounced candidates like Mexico’s front-runner Andrés Manuel López Obrador (Amlo), Brazilan ex-army captain Jair Bolsonaro, and former M19 guerrillero Gustav Petro in the recent Colombian election, are generating international intrigue in the region’s races. Commentators are particularly focused on Amlo and Bolsonaro’s campaigns, which are often stylistically compared to Trump’s 2016 campaign albeit their positions on opposite ends of the political spectrum. While the rise of alternative candidates throughout the region may be less surprising than Trump’s ascension in the U.S., their campaigns have rested on comparable nationalistic platforms and rallied against a slew of issues related to free trade and globalization.

As investors express concern with the harsh optics displayed by these campaigns, it is worth considering that the candidates’ extreme politics may be embellished for soundbites or media focal points. They could moderate these stances when it comes to actual policy-making. But ultimately it will be up to the voters to determine if these candidates are right for office or if other more traditional candidates are preferred.

Anti-Corruption Campaigns: In each of these electoral campaigns, a heavy focus remains fixed on cleaning up corruption. The creep from Odebrecht scandals has spoiled several presidencies, most notably in Brazil with Luiz Inácio Lula da Silva and Peru with Pedro Pablo Kuczynski but have also spilled into Mexico, Argentina, and Colombia. While these scandals have implicated politicians and businessmen alike, they are a testament to the power of an increasingly vocal middle class. With momentum and the right timing, these voiced demands for rule of law and a more effective judiciary may positively enhance economic conditions.

Venezuela Crisis & Immigration: Although Colombia absorbs the greatest impact of the crisis outside of Venezuela, its regional neighbors are not immune. Brazil and Argentina are continuously confronted with waves of immigrants from Venezuela, while Mexico contends with its own multitude of immigration issues. Given the unique and dynamic immigration challenges in each of these countries, we anticipate this will be a common topic throughout their elections.

Elections in Colombia closed on June 17th, setting the stage for July elections in Mexico and for elections in Brazil in the Fall. Campaigns in each country highlight important regional economic and political issues, from the short- and long-term impacts of rising US interest rates, the strengthening dollar, and the future of trade, to populist leadership and international crises. These themes provide investors with useful background and context to understand regional opportunities and challenges.

GXG: The Global X MSCI Colombia ETF invests in among the largest and most liquid Colombian securities.

Investing involves risk, including the possible loss of principal. International investments may involve risk of capital loss from unfavorable fluctuation in currency values, from differences in generally accepted accounting principles, or from economic or political instability in other nations. Emerging markets involve heightened risks related to the same factors as well as increased volatility and lower trading volume. Securities focusing on a single country may be subject to higher volatility. ARGT and GXG are non-diversified.

Carefully consider the funds’ investment objectives, risks, and charges and expenses before investing. This and other information can be found in the fund’s prospectus, which may be obtained at globalxfunds.com. Please read the prospectus carefully before investing.