Investors don’t need a market outlook to tell them 2019 sets up to be bumpy. What they might need is a friendly reminder to lean on investing fundamentals in their search for long-term equilibrium. Understandably, the recent pain may feel especially acute; after all, it’s been a while since we’ve seen a market like this.

Alas, 2019 is here. As investors ponder their portfolios, they would be prudent to track several major themes poised to affect market psychology: the flattening yield curve’s predictive power, March’s policy deadlines, and the U.S.’ economic fortitude.

The yield curve as a recession indicator

Expect the yield curve’s predictive ability to get even more attention. These remain largely uncharted waters given the extraordinary dynamics of the post-financial crisis era. However, history says that curve inversion, i.e., when the yield on short-term debt exceeds that of long-term debt, preceded the past seven recessions by 4–5 quarters.

A common yield curve measure, the spread between 10-year and 2-year Treasury yields, ended December just 21 basis points (bps) from inversion. That proximity could suggest a Federal Reserve (Fed) policy misstep and/or that a meaningful macro slowdown is possible for 2019 or 2020.

Another thought is that the tight spread actually reflects the U.S. being viewed as less risky than the rest of the world. For example, euro concerns could drive flows into the U.S. dollar and put downward pressure on long-term Treasury yields. The USD was strong in 2018; however, if the gap between U.S. and international growth narrows some reversion to the mean on the USD is possible. In that scenario, the shape of the yield curve is a potential beneficiary.

The Fed could also help that cause if it slows its hiking pace. Notably, in December the Fed dialed back its 2019 rate hike forecast from three to two after raising the fed funds rate by 0.25% for a fourth time in 2018.1 That led some to conclude that the crisis-era Fed Put is over, i.e., the belief that the Fed will use lower rates to rescue the economy from duress.2 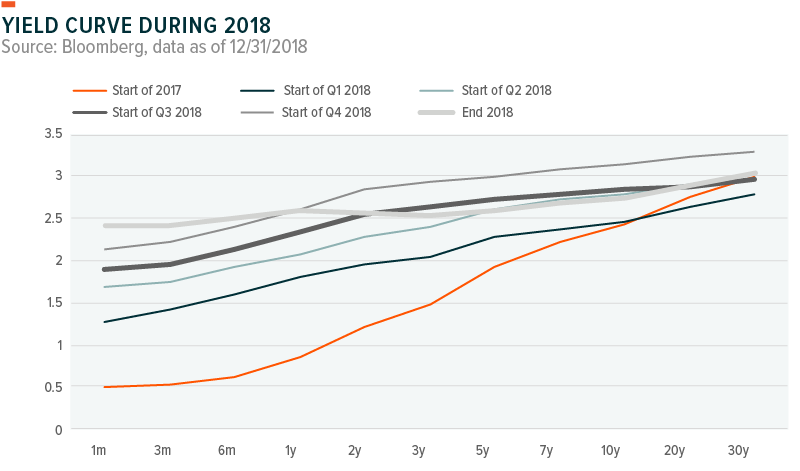 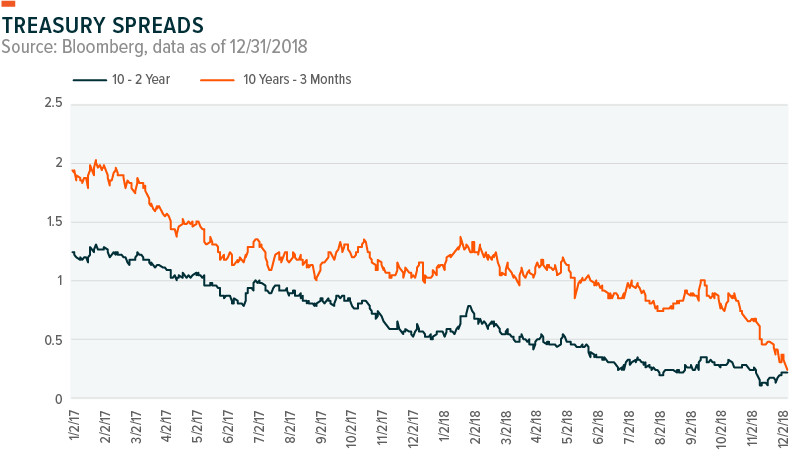 Don’t expect policy uncertainty to subside. The risks accompanying still-to-be-determined trade wars, Brexit, and oil sanctions, among others, look likely to linger. Looking ahead, March sets up to be an inflection point with the clocks on major policy deadlines winding down:

The 90-day truce ends in early March. Questions outnumber answers regarding the possibility of a long-term agreement; it’s still unclear what the two sides actually agreed to at the G20 summit. Retaliatory risk is real, as evident by the volatility that ensued following the arrest of tech giant Huawei’s chief financial officer in December.

The risk of brinkmanship around the debt ceiling reinstatement slated for early March has Wall Street’s eye. The government shutdown shenanigans in December certainly didn’t do anything to boost confidence in Washington’s ability to compromise.

The late-March cut-off date for a deal with the European Union looms. Prime Minister Theresa May delaying the parliamentary vote and the unsuccessful no confidence vote brought against her by her Conservative Party increases the possibility of separation without a deal. A second referendum on E.U. membership remains a possibility.

Overall, investors kept calm and carried on for most of the last two years; in fact, sentiment indicators exceeded expectations in December, with a slight dip in the outlook.3 But investors can only take so much, especially when uncertainties piggyback. 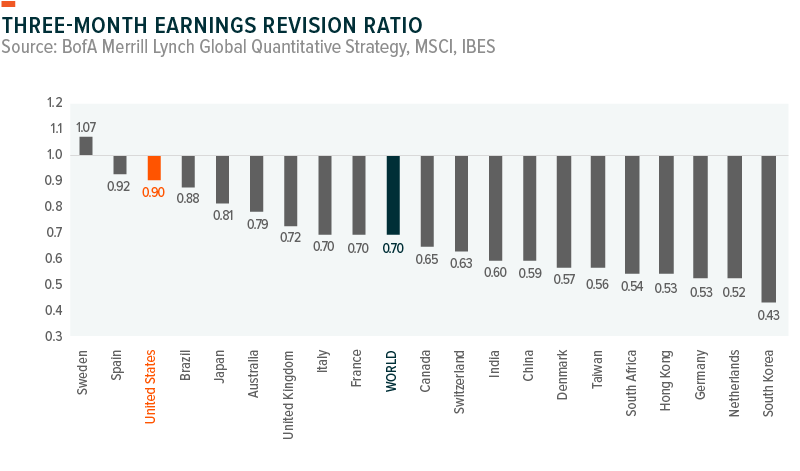 Economic and earnings resilience as a buffer

We do not expect a recession in 2019. Now, headwinds to continued economic expansion are not in short supply and threaten the longest running bull market in history. But there are positives to be found in the U.S. economy.

One is the U.S. consumer. Fiscal and monetary policy were significant contributors to the surging economic growth over the last two years, but consumers were the real engine of that growth. Currently, consumers remain reasonably well-positioned and confident, despite likely slower job growth and higher interest rates starting to move through the economy.4

Earnings are another positive. Concerns about peak earnings have led to fears about an earnings retreat. But those concerns appear to be a little overblown, as corporate earnings are still expected to grow in 2019, albeit at a slower rate than in 2018. BofA Merrill Lynch expects high-teens earnings growth in Q1 2019 before declining to the mid-single digits growth in the second half.5

Lower corporate taxes may still have supportive features as well. Share buybacks continuing into 2019 could give the market a boost. The additional funding from corporate tax cuts boosted buybacks and helped equity markets in the first three quarters of 2018, in particular, the Information Technology and Financials sectors. 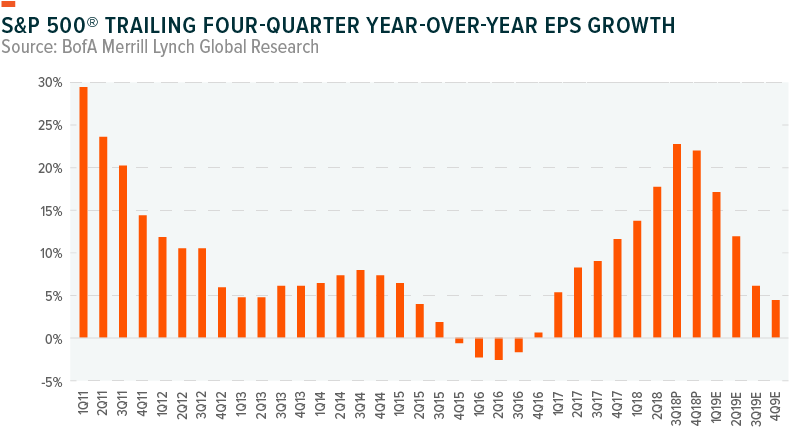 As always, diversified investment vehicles can give a portfolio needed ballast. In this market, which could feature volatility fueled by curve inversion, we view exposure to quality and cash-generative investments as increasingly important. In addition, Lower beta to global GDP growth could be prudent given global headwinds. 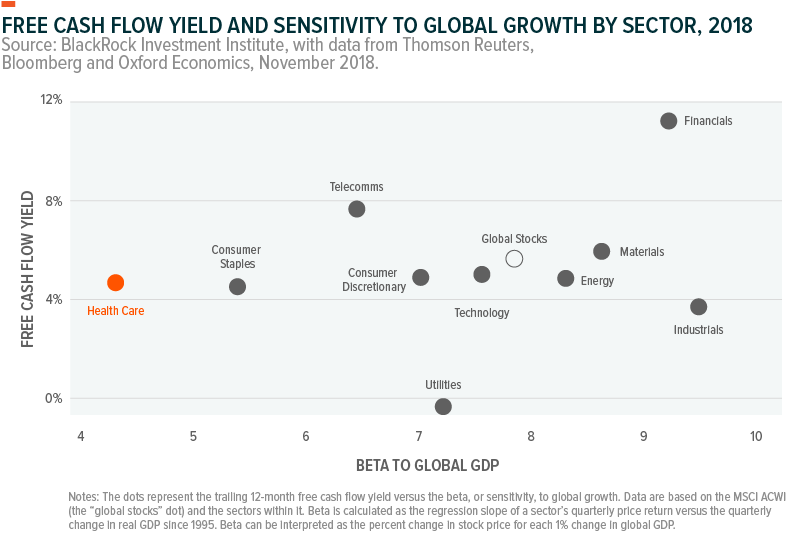 Broadly, we remain more positive on equities than fixed income. Thematic equity had a challenging Q4 2018; however, certain global strategies could perform if the growth gap between the U.S. and the world narrows as expected. Combined with a Fed that is expected to slow its rate hike pace, the dollar could see downward pressure.

Dollar weakness is supportive for commodity prices and commodity-dependent emerging markets. In that case, 2019 has the potential to be better for international and emerging market equity than U.S. equity, which seems poised for a breather. Of course, a policy-related spike in volatility could lead to a flight to safety, which would support the dollar.

In the debt market, quantitative tightening is likely to increase corporate spreads 25–50 bps for investment grade and high yield.4 Elsewhere, while rising yields dampen fixed income and equities, they may make cash a viable asset class for the first time in a long time.

One thing is certain, there’s a bunch of uncertainty as 2019 kicks off. Typically, the market does a decent job of pricing in what it knows. But when uncertainties compound as quickly as they have recently, it struggles to keep up. Fortunately, the market has been self-correcting over the long term. The trick is that sometimes it takes a while. In that wait for sellers to become buyers again, and as anxieties ratchet up, it is paramount to hone in on fundamentals and find footing in available pockets of perceived stability.

Basis point: A basis point is a hundredth of one percent. It is predominantly used to express differences in interest rates.

Quantitative tightening: The opposite of quantitative easing. This is the process by which excess liquidity is removed from the system by central banks globally.

Diversification does not ensure a profit or guarantee against a loss. Investing involves risk, including the possible loss of principal. This information is not intended to be individual or personalized investment or tax advice and should not be used for trading purposes. Please consult a financial advisor or tax professional for more information regarding your investment and/or tax situation.