From 2011 to 2015, the commodity ‘super cycle’ cooled down and reversed, punishing economies that had become too dependent on exporting raw materials. South America’s largest economies — Brazil, Argentina, and the Andean nations of Colombia, Chile, and Peru — were particularly affected, with declining export values causing GDP growth to fall, currencies to weaken, and stock markets to sell off. Yet in 2016, these five countries have been among the best-performing emerging markets. 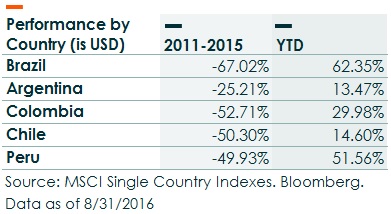 How did 2016 unexpectedly become the year of South America’s resurgence? In this piece, we discuss how the strong performance of equities in South America’s five largest economies have largely been driven by:

An important driver for this year’s returns in South America is a reversion to the mean, as abnormally low valuations for South American equities have begun to normalize. Economic growth among these regional powerhouses had deteriorated since 2011, with high-flying GDP growth falling from over 5% per year to a recession in 2015 with growth below -1%. 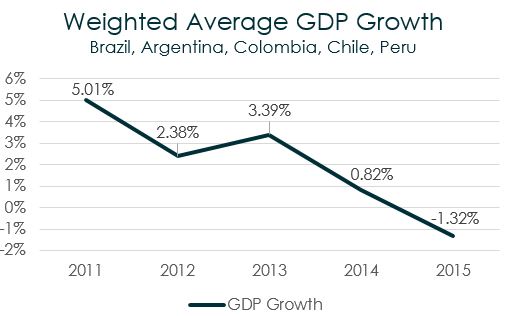 Going from such lofty GDP growth and expectations in 2011 to a recession in 2015 meant that some of the most desirable high growth securities in the world were being dumped in droves. This selloff pushed valuations from highs in 2011 to outright bargain levels by the beginning of 2016, as many of these countries were trading at less than half of their average price to earnings (P/E) from 2011 to 2015. Therefore, one explanation for the 34% average returns across these countries so far in 2016 could simply be a normalization of valuations back towards longer term averages.

In 2016, oil, gold, soybeans and iron have all rallied significantly. Copper, the lone top export commodity that is down this year, is a major export from Chile, which has not enjoyed such a sizeable turnaround as the oil exporting countries: Brazil, Colombia, and Peru. 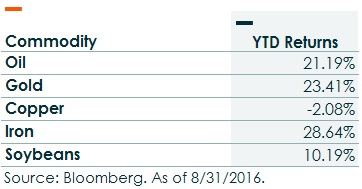 Another factor contributing to the positive returns has been an improving political landscape. Brazil, Argentina, and Colombia have each benefitted from new leadership and/or policy reforms that markets have responded to favorably.

Dilma Rousseff, from the Left-wing Workers’ Party, was impeached and replaced by new President Michel Temer, a right-leaning politician from the PMDB party. Many market participants view Temer as a more business-friendly leader than Rousseff, as he has pledged to reduce the government’s deficit, privatize state-run companies, and deregulate various industries.

These changes have led to additional positive developments, including MSCI’s decision to review the country for a potential upgrade to Emerging Market status, and Argentina’s relative strength versus other international equities.

In August, the Colombian government reached a peace deal with the FARC rebel group after 52 years of war that claimed over 220,000 lives and forced over 5 million people to relocate. Pending a national referendum in October, a peace deal is not only expected to boost national safety and morale, but also help to attract more foreign capital as international investors’ perception of Colombia improves with the deal.

The combination of normalizing valuations, a rebound in key commodity prices, and an improving political landscape, have all contributed to the phenomenal returns among South American equities in 2016. Despite high returns this year, extremely depressed valuations in South American equities and commodity prices could continue to revert higher towards long term averages over the coming years, providing additional tailwinds to these stocks. In addition, further progress in the political arena with quality leadership that promotes free trade, reduces government deficits, and tackles corruption, could also continue to propel the resurgence of South American stocks.

Definitions:
Price to Earnings (P/E) is defined as the price of a security divided by its Net Income per share, or earnings per share.
Index returns for individual countries are based on their respective single country index from MSCI. These indexes are designed to measure the performance of the large and mid cap segments of each market. The indexes cover approximately 85% of the free float-adjusted market capitalization for each country.

Investing involves risk, including the possible loss of principal. International investments may involve risk of capital loss from unfavorable fluctuation in currency values, from differences in generally accepted accounting principles, or from economic or political instability in other nations. Emerging markets involve heightened risks related to the same factors as well as increased volatility and lower trading volume. Securities focusing on a single country maybe subject to higher volatility.