I recall a famous story about Ace Greenberg, the chairman of Bear Stearns on Black Monday in 1987.

To break the tension on the trading floor, he got up from his desk and casually started to practice his golf swing. Ironically, he wasn’t much of a golfer, but that was beside the point—it was his way of showing his charges that it’s cooler minds that prevail.

That being said, I spoke with several trading desks about yesterday’s sell-off. Every one of them indicated that there was no panic. They all opined that retail selling and stop-loss orders being hit triggered the sell-off. In addition, many cited algorithmic trading as a culprit in exacerbating the pullback.

In short, there is nothing fundamental that suggests this is anything other than a garden variety pullback.

Now, 1,100 points seems like a big number, but it’s important to put it into perspective. Remember, the denominator got larger. The Dow Jones Industrial Average (DJIA) was over 26,000 just a few days ago. Currently, it’s at 24,515. The DJIA along with S&P 500 (SPX) are now trading where they were in late December.

A month of gains was lost, not a year’s worth.

Could the selling continue, and continue to drive investors to the usual “safety” trade in gold and Treasuries like it did yesterday? Sure it could.

But working in the market’s favor is that the profit picture looks strong despite signs of an uptick in inflation. 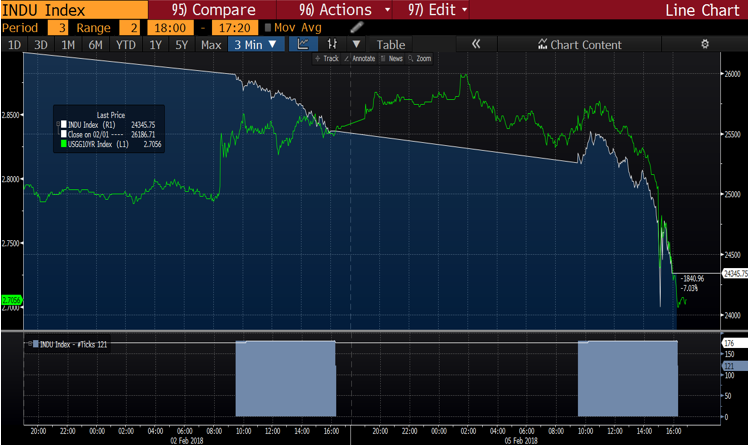 In our year ahead piece we wrote the following: “The Fed may be at the mercy of inflation. An upside surprise in inflation would likely quicken the pace of the Fed’s tightening, possibly ushering in a bear market. It could also depress corporate margins if companies are unable pass higher costs on to customers.”

Now, inflation has increased some, but thus far Fed actions have been muted. Jay Powell is now seated as the Fed chair, which adds some uncertainty for the market. In some respects, though, the market could be testing him here.

Overall, I revert back to the point that there are a number of factors at play here, and that fundamentals remain strong.

During times like these, it’s important to swing nice and easy, even when a correction feels like much more.

Carefully consider the Funds’ investment objectives, risk factors, charges and expenses before investing. This and additional information can be found in the Funds’ summary or full prospectus, which may be obtained by calling 1-888-GX-FUND-1 (1.888.493.8631), or by visiting www.globalxetfs.com. Read the prospectus carefully before investing.

Investing involves risk, including the possible loss of principal.