A Portfolio Manager’s Perspective on Sector Investing in China

Investing in China isn’t what it used to be. Historically, most foreign investors were limited to broad emerging market or single country funds. But China evolving to a more open, global economy adds dynamism to its investment potential, even amid heightened volatility and geopolitical tensions. It also adds complexities to the search for alpha. Increasingly, we believe China warrants more nuanced approaches, such as those introduced by sector investing.

China is a focal point in the Conversational Alpha discussion

China’s structural support, including its increased commitment to global trading institutions and growing consumer base, continue to offer a compelling investment case. That makes exposure to the world’s second largest economy more consequential.

The search for alpha is constant, and an economic behemoth like China transitioning from an export economy to a consumption economy has alpha seekers eager to capitalize. However, alpha can be a distant term, clouded by murky market forces and technicals. We prefer to make it more relatable than the by-the-book definition, i.e., the excess return of an investment relative to the return of a benchmark index.

We call it Conversational Alpha. Essentially, it’s a starting point for performance-related discussions when sizing up the factors that could contribute to an investment adding or subtracting from returns. The bulk of those discussions focus on the ‘how’ and ‘why’ behind our investment portfolios. 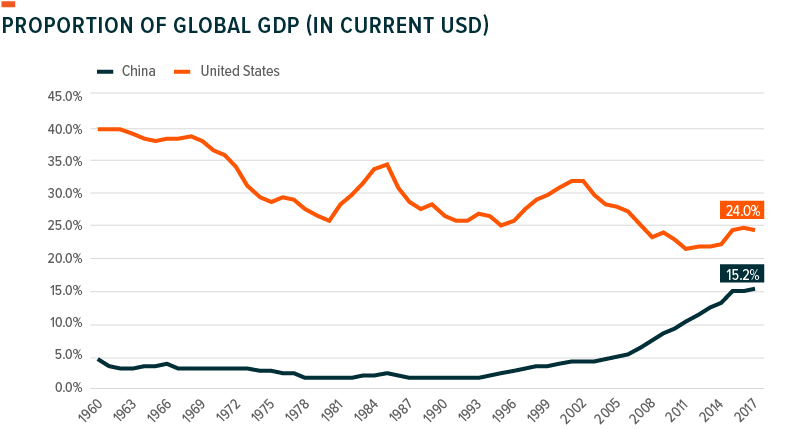 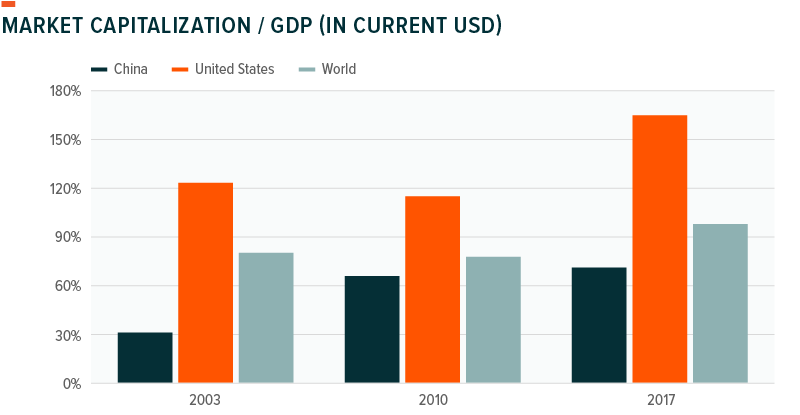 Why it’s time to consider sector investing in China

In a mature market like the US, economic, regulatory, legislative, and political developments typically have similar effects on the underlying stocks in a sector. For example, Financials and Consumer Discretionary stocks generally turn on credit markets and interest rates and are thus highly correlated. The same is true of the Industrials and Materials sectors; stocks in these sectors typically move in tandem given that they provide essential raw inputs to numerous industries.

But a potential benefit of sector investing is that it adds a touch of creativity to a portfolio. In particular, combining unlike sectors can yield differentiated outcomes. For example, pairing stocks in a defensive-oriented sector like Utilities with stocks in the growth-oriented Technology sector may help manage portfolio risk in different types of market environments. Strategically adding other sectors to that mix could compound the diversification benefits as well. 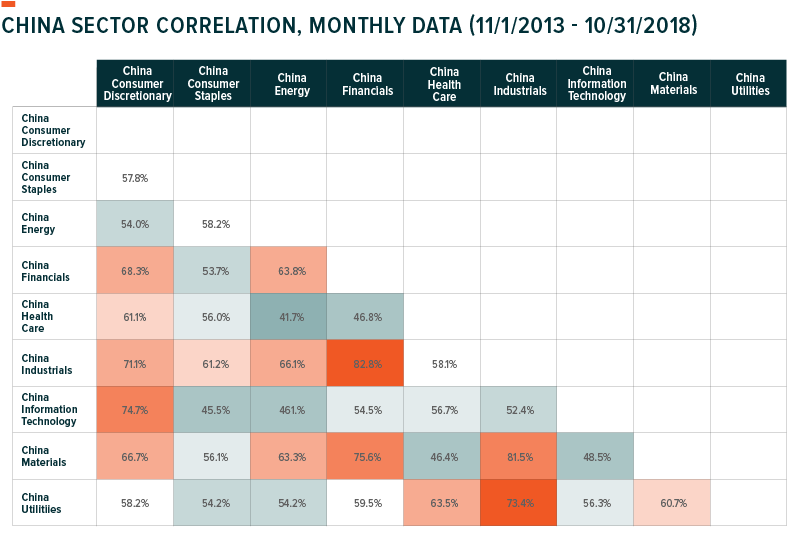 Now, the evolution of China’s economic backdrop differs from that of the US; it’s not directly comparable given China’s history as a command economy, in which the government determines production, investment, prices, and incomes. However, as our research team explored in detail, Chinese sectors show three key attributes that investors typically look for in their developed market sector allocations:1

—   Correlation between sectors is low. This suggests sectors react differently to risks (e.g., geopolitical tensions with the US) and return drivers (e.g., growing domestic consumption). In addition, correlations between Chinese sectors and their US counterparts are low, demonstrating that they aren’t driven by the same risks and returns either.

—   Chinese sectors have their own unique fundamentals relative to each other and their U.S. counterparts. The prevalence of state ownership in certain sectors is the likely cause of this feature, particularly among the Financials, Energy, Industrials, and Utilities sectors. Other factors include changing demographics as well as the composition of the Chinese market from both a sector and industry perspective.

—   Consumption varies by region. The discrepancies reflect the rise of a new middle class, one influenced by increased access to the Utilities, Consumer Staples, Consumer Discretionary, Real Estate, Financials, and Communication Services sectors. 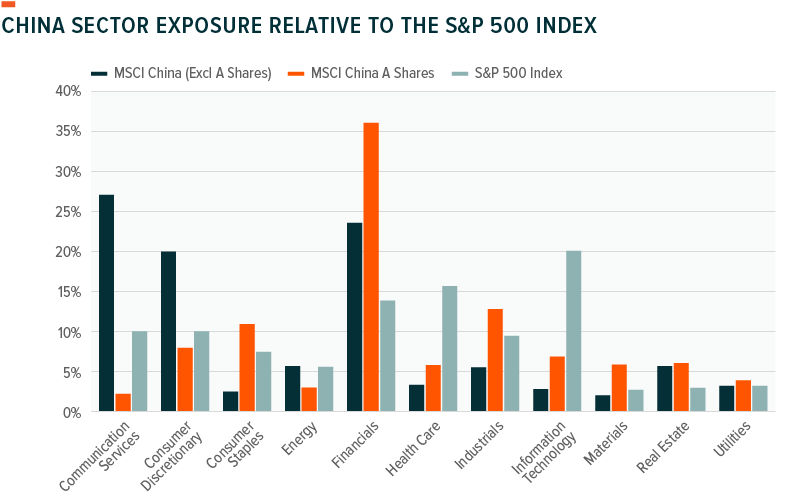 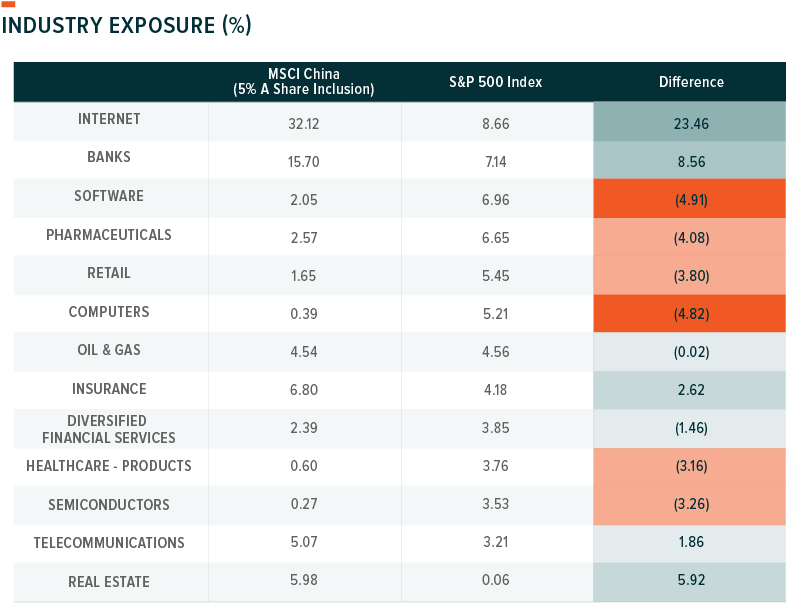 For years, government curbed foreign investment in China’s A-share market. The lack of access to one of the world’s largest equity markets, estimated at $6 trillion, limited China-focused indexes and funds to H-shares, which are listed in Hong Kong.

But with China gradually lifting the veil on A-shares, exposure to opportunities in China via broad country funds or specific sector funds would be incomplete without including this opportunity set. For context, China’s A-share market consists of more than 3,500 companies.1

As a result, Global X recently revamped its suite of China sector ETFs, changing the indexes of six existing funds and launching five additional funds. The funds include all eligible Chinese equity securities, including China A-shares.

We’ve said it before, and we’ll say it again: There is nothing passive about investing. The decision to invest is an act that triggers a series of events that requires investors to get involved—and stay involved—even when utilizing index-based vehicles. Greater access to China is a significant development, one worthy of attention and due diligence. Amid their search for alpha, investors should consider how China’s increased presence in the market could add to their investment conversation and align with their objectives, risks, and outlook.

Diversification does not ensure a profit or guarantee against a loss. Investing involves risk, including the possible loss of principal. International investments may involve risk of capital loss from unfavorable fluctuation in currency values, from differences in generally accepted accounting principles, or from economic or political instability in other nations. Emerging markets involve heightened risks related to the same factors as well as increased volatility and lower trading volume. Securities focusing on a single country and narrowly focused investments may be subject to higher volatility. Global X’s China Funds are non-diversified.

Carefully consider the Funds’ investment objectives, risks, and charges and expenses before investing. This and other information can be found in the Fund’s summary or full prospectuses. which may be obtained at globalxfunds.com. Please read the prospectus carefully before investing.