On December 11th, Global X expanded its China Sector Suite to offer ETFs covering each of the 11 sectors recognized by the Global Industry Classification System (GICS). By providing investors with access to each major economic sector in China, these funds allow for more targeted exposures and tactical strategies for harnessing opportunities within the world’s second largest economy.

A New Phase for Chinese Growth

Historically, many investors have taken a broad approach to China, looking to capture its growth through emerging market (EM) index funds or through single-country ETFs targeting a broad basket of Chinese stocks. The approach reflects an assumption that the main driver of Chinese stocks is simply their nationality, with returns primarily driven by the country’s overall growth. Rather than focusing on what is owned in China, it prioritizes how much of China is in a portfolio.

Yet after decades of explosive economic expansion, the country has developed a large, complex, and dynamic economy – one that rivals the powerful and multi-faceted economies in the developed world. It features the world’s largest population, second largest gross domestic product (GDP), and over 3,000 listed companies representing over 10% of global market capitalization.1

But as China’s economy becomes even larger, overall growth is decelerating, and complexity is increasing. Expectations hold that China will expand at a faster pace than the rest of the world over the next five years, but by a narrowing amount each year. Corporate performance is increasingly being driven not just by broad Chinese economic growth, but by a variety of heterogeneous risks, themes, macro-factors, and government policies. With slowing growth and a more intricate economy, we believe investing in China will require gaining not only broad exposure to the country’s high economic activity, but also more selective exposures and strategies to harness specific opportunities.

Utilizing sectors to access segments of the Chinese economy also allows investors to capture policy-driven growth associated with its strong central government’s key initiatives. One key focus for investors might be China’s Belt and Road Initiative (BRI), which is aimed at expanding China’s land and sea routes, as well as its global economic influence. Under BRI, Chinese Financials, Industrials, and Materials all potentially benefit from the extensive infrastructure projects that connect China with other emerging and frontier economies.

Investors may also be interested in government initiatives formed in concert with BRI, including the comprehensive, 10-year Made in China 2025 (MIC) plan, which aims to establish China as the leader in high-tech manufacturing across ten strategic industries, spanning across traditional and information-technology driven infrastructure. Intended to provide China with a generation of innovators and establish China as a leader in the fourth industrial revolution, MIC involves heavy government funding to develop domestic capabilities in big data, cloud computing, artificial intelligence (AI) and other emerging technologies. From a sector perspective, this provides long-term state-sponsored investments, protections, and preferences for Chinese Industrials and Information Technology firms.

In any geography, sector-based investing can offer investors more control over exposures to various segments of an economy. This can allow investors to toggle between cyclical stocks and defensives, to adapt to business and economic cycles, and to adjust exposures according to risk appetite or return goals. Sector investing may also help mitigate external risks like fluctuations in oil prices, interest rates, or geopolitical risks.

Yet in order for sector investing to make sense in a particular market, investors typically want to see two key traits:

Outside of the United States, China is a rare case where these two conditions can be met.

Looking at the annual performance of the MSCI China Index from a sector perspective demonstrates the uncorrelated nature of their performance. Much like sectors in the US, sector leadership changed frequently in China and performance differences were even greater. On average, since 2012 the differences between the best and worst performing sectors in China has been over 55% compared to 34% for the United States. 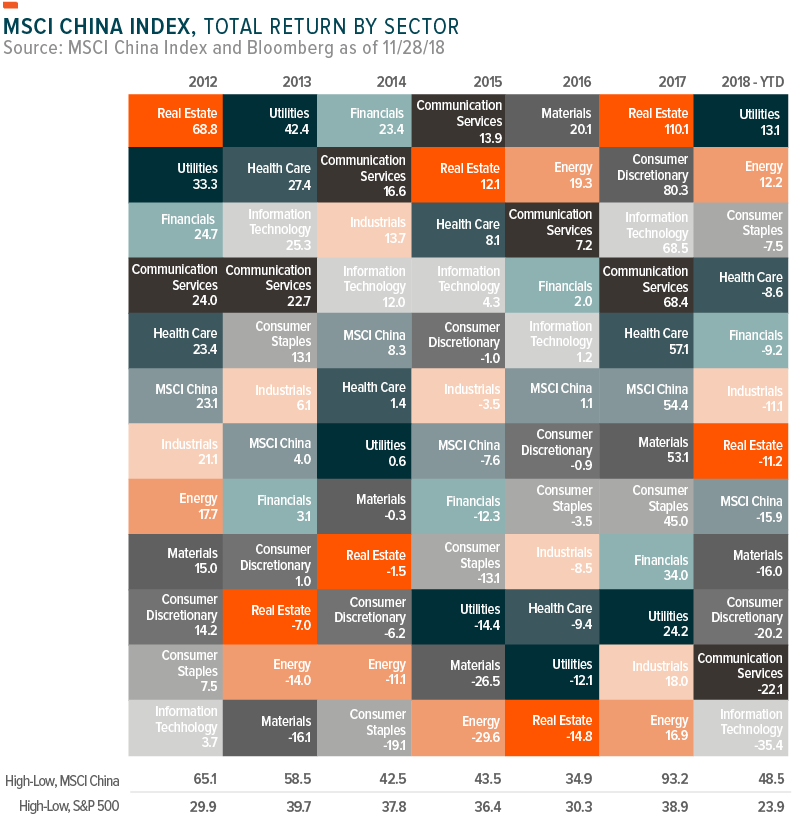 The divergence in sector performance in China is a result of the distinct risks, opportunities, and characteristics that drive each of the country’s sectors. In the table below, we show differences among sectors across a multitude of measures including market cap, valuations, and key drivers. 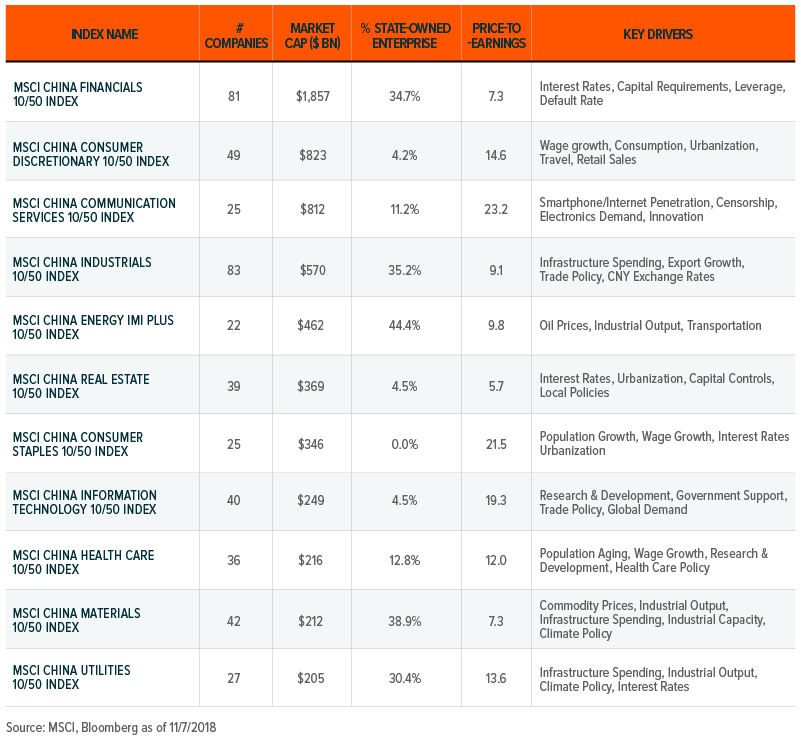 Another important feature for Chinese sectors is the divide between China’s “old economy,” made up of legacy, state-owned enterprises (SOE) that enjoy implicit government support, like many in Industrials, Financials, Materials, Energy, and Utilities, and the emergence of its consumer-driven, “new economy.” The new economy features companies that are more dependent upon retail performance, domestic consumption, and demographics, like Consumer Discretionary, Communication Services, Health Care, and Information Technology.

Chinese sectors have also performed quite differently from their US counterparts, suggesting that the drivers and characteristics of sectors may not be the same across countries. For example, Energy is one area where investors may assume performance would be similar in both China and its foreign counterparts, given that the sector is closely associated with changes in oil prices. Yet the difference in average annual returns between Chinese energy companies and US energy companies was over 15% since 2012. 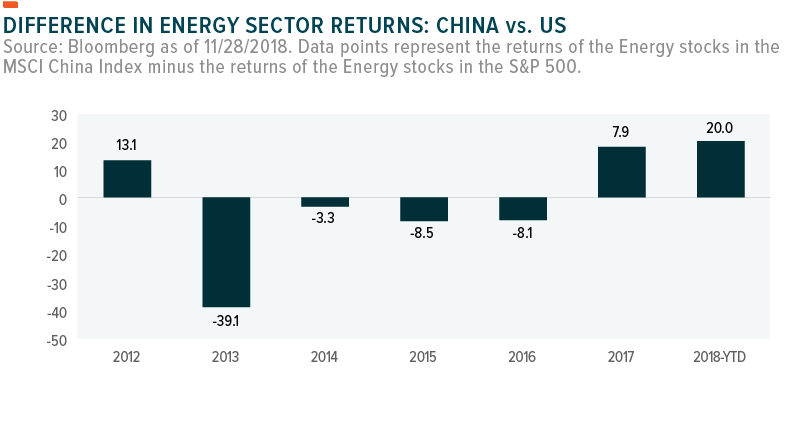 Chinese energy companies behaved differently in response to changing oil prices, perhaps because of government price controls, a greater emphasis on imports, policies aimed at reducing emissions, or the strong presence of SOEs, all of which differs from the characteristics of the US Energy sector.

In recent years and with increased international pressure, China has liberalized its capital markets more aggressively, implementing reforms to grant international investors greater access to China through locally-listed securities. MSCI’s recent inclusion of domestic Chinese ‘A-shares’ into its indexes reflects an international recognition of the momentum in China to reduce barriers for international investors. Following several rounds of Chinese policy reform and MSCI’s extensive external consultations, the index provider adopted an incremental approach to expanding the universe of investable equities in its indexes in line with greater access and availability. This move to include A-shares considerably enhanced the depth of China’s investable market, bringing into the fold hundreds of companies from a variety of sectors that were previously largely ignored by foreign investors. 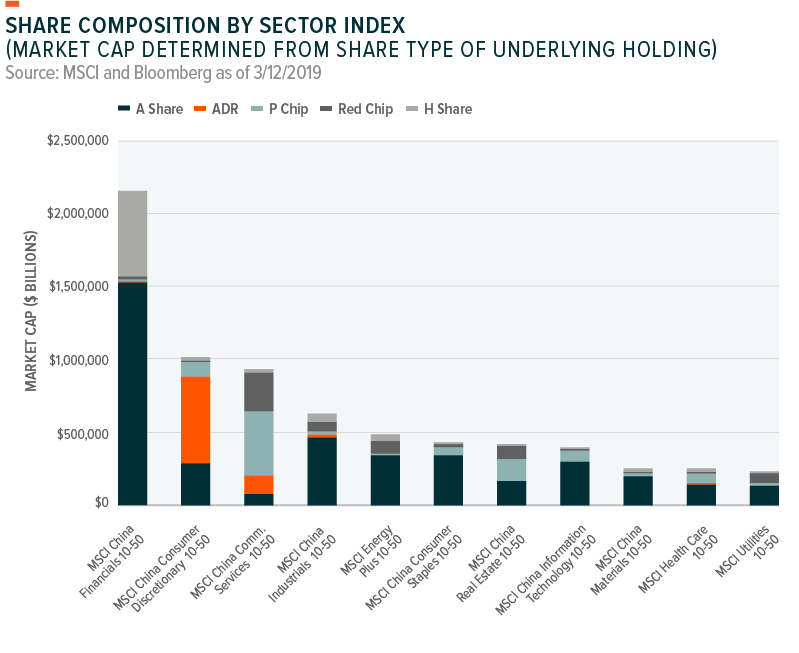 As China’s economy loses momentum, its enormous scale will be too large to ignore, but opportunities will increasingly need to be found through more nuanced exposures. Given the increased complexity of China’s market, sector-based approaches have the potential to help isolate specific opportunities within the country. These opportunities can be driven by a range of factors including geopolitics, government policies, a changing consumer base, and macro-economics.

Investing involves risk, including the possible loss of principal. International investments may involve risk of capital loss from unfavorable fluctuation in currency values, from differences in generally accepted accounting principles, or from economic or political instability in other nations. Emerging markets involve heightened risks related to the same factors as well as increased volatility and lower trading volume. Securities focusing on a single country and narrowly focused investments may be subject to higher volatility. The Global X China Sector Funds are non-diversified.

Carefully consider the funds’ investment objectives, risks, and charges and expenses. This and other information can be found in the funds’ full or summary prospectuses, which may be obtained at globalxfunds.com. Please read the prospectus carefully before investing.