From personal assistants like Siri, to movie suggestions on Netflix, artificial intelligence (AI) is rapidly becoming ubiquitous in everyday life. As this technology continues to advance in capability and prevalence, we sought to explore AI and several closely related subtopics: machine learning, deep learning, and neural networks.

What are the Differences between Artificial Intelligence, Machine Learning, and Deep Learning?

While artificial intelligence (AI), machine learning (ML), and Deep Learning (DL) are often used interchangeably, there are several key differences. One way to visualize the relationship is through a series of concentric circles. AI is the macro topic which encompasses the entire field of study, while ML is a subtopic within AI. DL is a further refinement of ML and represents the most cutting edge of AI applications that are being used today.1 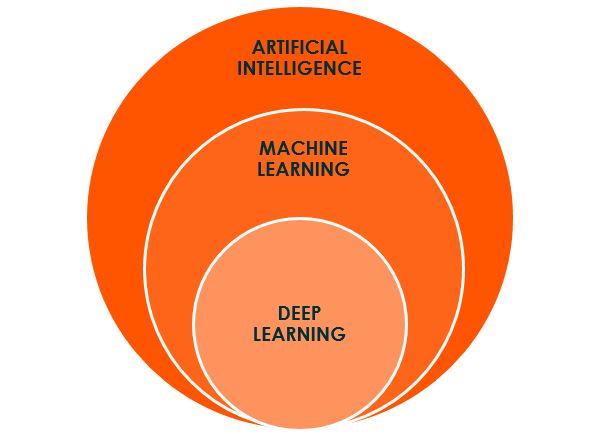 At a basic level, artificial intelligence is the concept of machines accomplishing tasks which have historically required human intelligence.1 AI can be broken down into two distinct fields:

General AI: Machines designed to complete any task which would normally require human intervention. The broad nature of General AI requires machines to “learn” as they encounter new tasks or situations. This need for a learned approach is what gave rise to modern Machine Learning.2

Today, many firms at the cutting edge of AI are focusing on machine learning (ML). In simple terms, ML is the process of building machines which can access data, apply algorithms to this data, and then train themselves to deduce valuable insights based on these underlying datasets.

The key difference between ML and AI is that ML does not rely explicitly on the code of its creator. Rather, ML systems use computer code as a starting point and then gather data, information, and inputs which can be studied – similar to how a student might study for an exam. It is this relationship with big data that makes ML and the Internet of Things (connecting regular objects to the internet so they can collect data or be controlled remotely) so closely intertwined.3

Currently, ML is typically used to recognize faces, voice commands, and objects, as well as to translate languages. It has been successfully implemented in chatbots, such as Siri (Apple), Cortana (Microsoft), and Alexa (Amazon). With the victory of Google’s “Deep Mind” over the Go world champion in 2016, ML is now increasingly becoming accepted as a useful tool for decision making in the corporate world.4

Consider a very basic artificial neural network which is responsible for determining if a photo contains a banana or an apple. The network has three neurons which are responsible for answering:

Apart from being used in image and voice recognition algorithms, companies are implementing deep learning to predict customer preferences, detect fraud and spam, fight malware, conduct life-saving diagnoses, and recognize handwriting. In many ways, the possibilities for this technology are endless.

Gartner’s recent study projects that by the end of this decade, the average person will have more conversations with a virtual assistant or bot than with his or her immediate family.6 Such penetration of artificial intelligence into our everyday lives will depend on further advances in the technology to become smarter, more capable, and easier to interact with. While many expect this progress to occur from advances in machine learning and deep learning, there are new techniques to being introduced as well.

It’s with this momentum in mind that we developed our Robotics and Artificial Intelligence ETF (BOTZ). The fund seeks to invest in companies that can potentially benefit from increased adoption and utilization of robotics and artificial intelligence.

Investing involves risk, including the possible loss of principal. The investable universe of companies in which BOTZ may invest may be limited. The Fund invests in securities of companies engaged in Information Technology which can be affected by rapid product obsolescence, and intense industry competition. In addition to normal risks associated with investing, international investments may involve risk of capital loss from unfavorable fluctuation in currency values, from differences in generally accepted accounting principles or from social, economic or political instability in other nations. The fund is non-diversified which represents a heightened risk to investors.