Greece’s stock market is off to a strong start in 2019, helped by the country’s broad economic growth reaching its fastest annual increase since 2007. At the end of Q2, the markets were up 40.4% making it the best performing emerging market year to date (YTD).1 Growth forecasts project annualized 2019 GDP at 2.4%, versus the 1.3% forecasted for broader Europe.2 And after issuing its first 10-year bond in years, yields on the notes fell to all-time record lows.3 Greece’s improving growth prospects could help place it in the midst of a virtuous cycle, standing out against the weak backdrop of a sluggish Europe. Following the July 7th elections, which were pushed up from October, we reflect on Greece’s strong first half to 2019.

Since the original version of this post in April, Kyriakos Mitsotakis of the centrist-right New Democracy party replaced Alexis Tsipras of the Syriza party, as Prime Minister of Greece. There have also been several positive market developments in Greece, which includes falling yields on its 10 year note and its request for early repayment of certain more expensive IMF loans (which have an annual interest rate of around 5% versus the current yield on its sovereign debt that is less than 3%). These developments could improve Greece’s fiscal situation, even after the ruling Syriza party’s last-minute attempts to win support by granting special pension benefits and tax cuts.

Greece’s strong equity market returns came amid the ongoing push to clean up bad debt from bank balance sheets. As a result, financials lead the way as the biggest positive contributor to performance during Q1 and Q2. Causes for optimism in the Financials space include increased liquidity in local financial institutions, with banks having almost fully repaid emergency European Central Bank (ECB) liquidity assistance, yields on the 10-year at an all-time low, and the Greek Ministry of Finance submitting a request in April to make early repayments to the IMF.4

Further powering returns was a recovery in consumer confidence, which started the year off at almost pre-crisis levels, and has risen for four consecutive months through June.5 While economic confidence rose to its highest level in nearly 10 years, private consumption continued to drive strong performance during Q2 within the consumer services and energy sectors, and the telecoms and casinos & gaming sub-industries.6 Such improvements follow improvements in household finances, labor gains with unemployment falling by 3% in 2018, and national account data earlier this year reflecting improvements in labor productivity.7 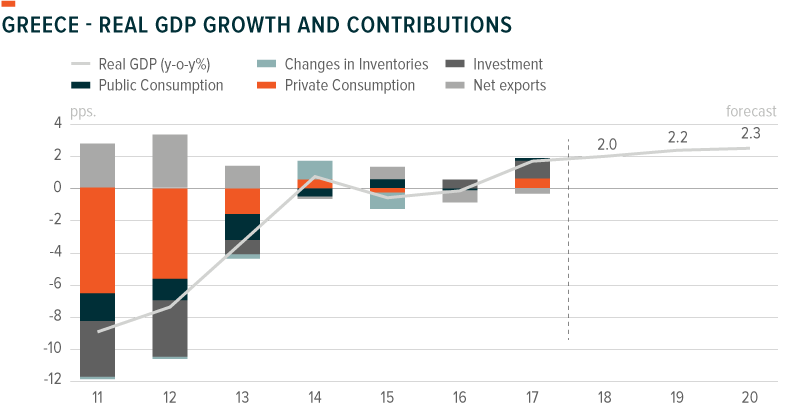 For sustained, positive performance over the longer term, the banking sector will require further improvements, like the continued reduction of non-performing loans (NPLs) and assistance to banks crippled by outstanding debts. While private-sector bank deposits rose nearly 6% to close out Q2 in April, the ongoing recovery in domestic consumption, sustainable wage growth, construction forecasts, and the further development of key industries like tourism, will be key.

In March, Moody’s raised Greece’s long-term debt rating two notches from B3 to B1 with a stable outlook. In the process, Moody’s noted that the “ongoing reform effort is slowly starting to bear fruit in the economy.”8

The credit rating agency acknowledged some missteps in Greece’s progress, but also noted that “reform momentum appears to be increasingly entrenched, with good prospects for further progress and low risk of reversal.”

Given a strengthening credit profile, the government tested investor risk appetite with a five-year bond issuance in January, the country’s first offering since exiting its international bailout programs last summer. Encouraged by the response and Moody’s upgrade, the government went back to the market with a 10-year bond offering, it’s first such issuance since 2010. The 10-year issuance was 4.7x oversubscribed, raising 2.5 billion euros at a 3.90% yield. 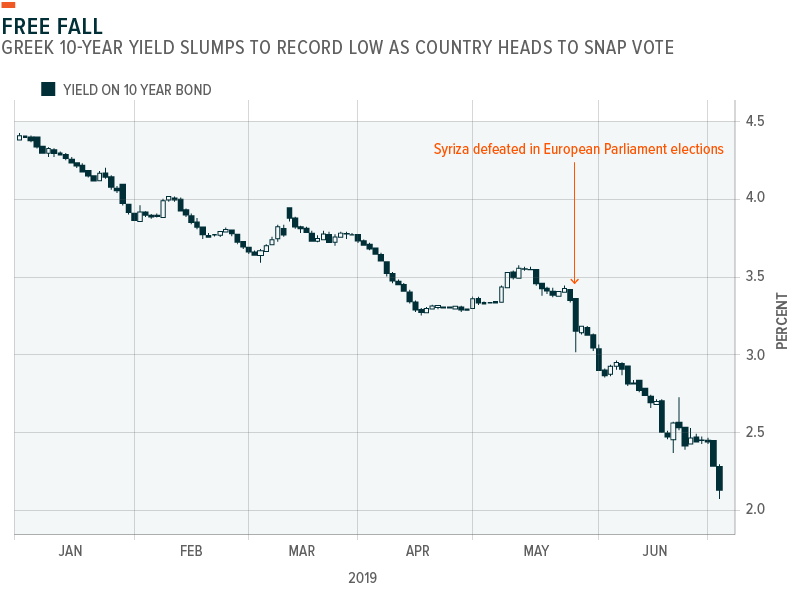 Given the bond issuance, yields on Greece’s 10 year note have fallen drastically. YTD, the yield on the 10-year note fell from nearly 4.5% to 2.1%, narrowing to a 14bps spread over the US 10-year.9

The falling yields experienced the sharpest drop, however, after the ruling Syriza party was defeated in May by the New Democracy party in the European parliamentary elections. The May elections proved portentous for the pro-market New Democracy party, which won the recent July elections and put the party into office at an opportune moment to guide Greece’s bull market.

A global slowdown or weakening European demand could hurt Greece’s momentum, particularly given Greece’s dependence on tourism and exports. Despite risk of a potential slowdown in the EU, Greek exports are expected to remain on an increasing trajectory. Even in the event of a weakened external economic climate, Greece has potential offsets for the first time in years and expects a healthier domestic economy with improvements in its current account, across employment, consumption, and business condition metrics, as well as renewed investor interest in the industrial and real estate sectors. While in January, industrial production rose 3.4% year-over-year,10 and FDI into real estate rose dramatically from 89 million euros in 2017 to 752 billion euros in 2018,11 the tourism sector boomed, leading to a modest rise in housing prices throughout Greece. Likewise, the industry surged in Q1, with building permits swelling by nearly 36% in Q1.

Political risk has been seemingly muted by the recent July elections which were originally scheduled for October, which were pushed up to July to follow local and European elections. This was likely an attempt to minimize the Syriza party’s losses after failing to win the European elections but before a slowdown in Europe could potentially curb the nation’s progress, or threaten Syriza’s last-ditch attempts to woo voters – including pension bonuses and tax cuts – which could have potentially backfired to limit Greece’s ability to meet its fiscal targets.

As a result of the recent elections, however, Mitsotakis won the Prime Minister’s seat and his New Democracy won a majority in Parliament. Foundational to the party’s platform is the promise of fast-tracked, market-friendly policies, including closer ties to the EU, cutting red tape for business, lower corporate taxes for domestic and international businesses, and major investment projects worth over 10 billion euros, such as port development in Pireaus, a mining project in Skouries, a luxury resort and development at Hellinikon, dozens of smaller projects on Greek islands, and upgrades to the health care and waste management systems, which have been held up for several years by bureaucratic permits and processes.

Under the leadership of new Prime Minister Kyriakos Mitsotakis, Greece will continue to face the challenges of high debt to GDP levels and unemployment. However, its progress could ultimately accelerate domestic growth should stabilization improve creditors’ outlooks and thus the conditions attached to its loans. Although progress is still needed, Greece’s prospects are normalizing at a time when political and market-risk seem dampened with New Democracy holding the policy reins.

Not since pre-crisis days has Greece received such positive investor attention or demonstrated such strong potential. After exiting its third IMF bailout program only months ago, Greece has demonstrated a strong resilience, unlocking growth through incremental structural change, and outperforming its regional counterparts and emerging-market peers. Despite the challenges Greece continues to face, its emergence from crisis has prompted a renewed interested in, and a solid foundation for, Greece’s long-term growth story.

11. Bank of Greece, Net Foreign Direct Investment in Greece by Industry Classification as of Apr 2, 2019.