Much of the debate around the rise of robotics technology is how it could displace workers in the manufacturing sector around the world. In the chart below, we show the robot density (number of industrial robots per 10,000 manufacturing workers) for major manufacturing countries. We also include the average compensation cost per hour for manufacturing workers in each country. Intuitively, one would believe that countries with higher labor costs would have greater robot density, as robots would present a more cost efficient alternative to high cost labor. We found, however, that many higher labor cost countries in Europe have comparatively low robot density, which could be representative of protectionist labor or manufacturing policies, or a slower than expected adoption of the robotics technology. Developed Asian countries like Korea, Singapore, and Japan, however, have demonstrated a much higher than expected adoption of robotics technology given their lower labor costs, presumably as those countries have placed a greater emphasis on maximizing global competitiveness. 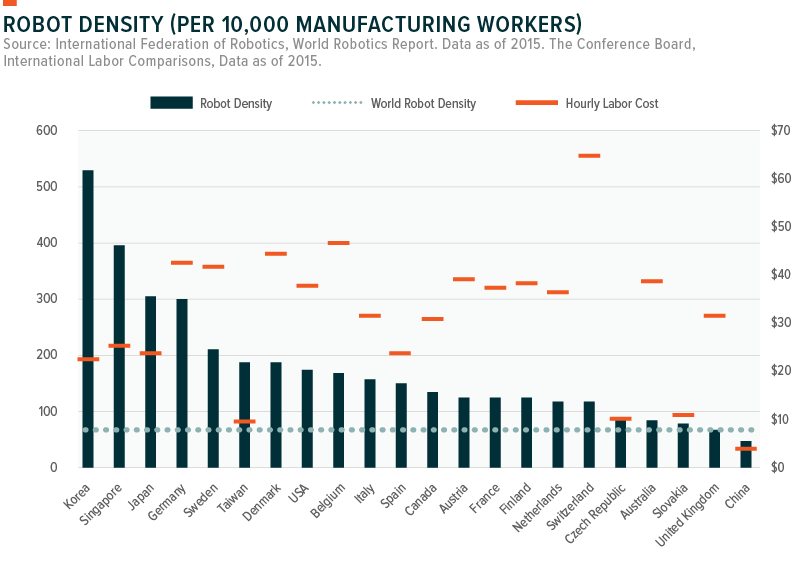 This material represents an assessment of the market environment at a specific point in time and is not intended to be a forecast of future events, or a guarantee of future results.  This information should not be relied upon by the reader as research or investment advice and is intended for educational purposes only.

The information contained herein has been provided to Global X by an unaffiliated third party.  Global X cannot guarantee the accuracy or completeness of the information and assumes no responsibility or liability for its incompleteness or inaccuracy.