Chart: Is Argentina the Case Against Populism?

While populist political ideologies have been gaining steam in many countries, Argentina has been moving in the opposite direction. In December 2015, Argentina elected a ‘center-right’ candidate, Mauricio Macri, to the Presidential office, reversing 12 years of rule by the populist-leaning Peronist party, led most recently by Cristina Kirchner. Since taking office, Macri has sought to enact sweeping reforms to undo the legacy policies that he inherited.

In the table below, we show a side by side comparison of some select policies from Kirchner’s rule in 2015 and Macri’s policies today. 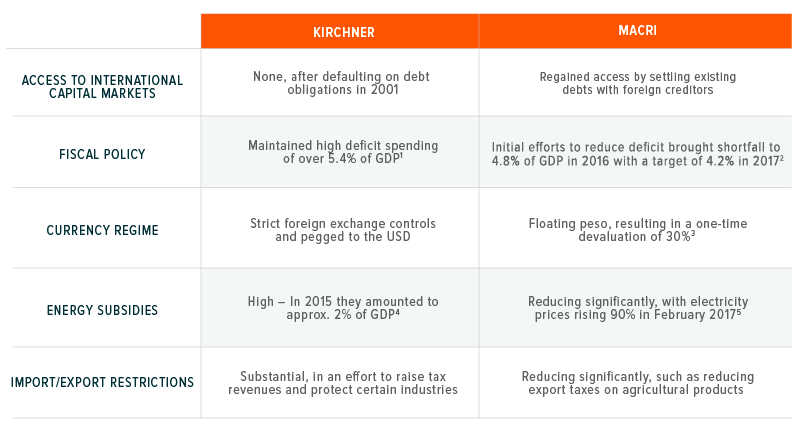 How have these significant policy changes impacted Argentina’s economy? The table below compares some key macro-economic data for Argentina from 2015 to now. 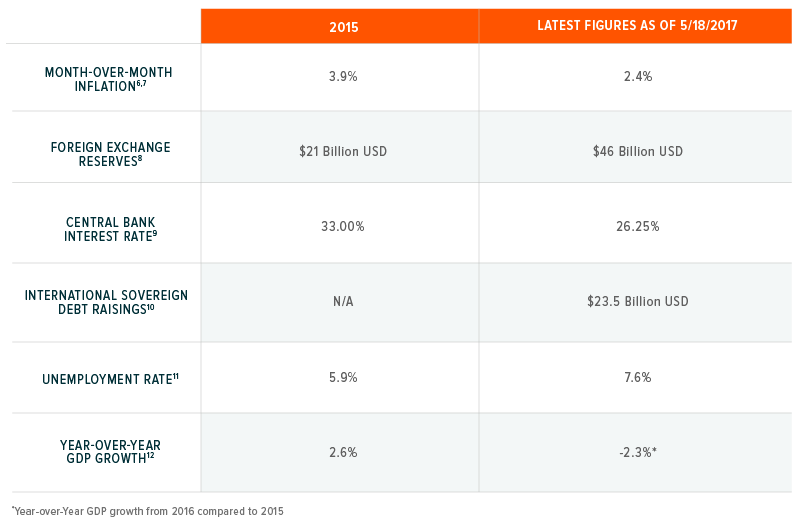 Since taking office, Macri’s primary goal has been to transform Argentina into a more open economy driven by a competitive private sector. Specifically, Macri has targeted excessive government spending and protectionist economic policies in an effort to set the economy on a higher growth trajectory. While many economic indicators are already improving in a short time, sweeping reforms like those mentioned above can often come with painful ramifications. Unemployment has increased due to layoffs of government employees and, despite falling initially, inflation has crept higher again due to the removal of energy subsidies. GDP growth has turned negative in the short-term as inflation, reduced consumer spending power, currency weakness, and rising interest rates have all temporarily stunted the nation’s growth as it adjusts to some of Macri’s new policies. Citizens who lost their government jobs or subsidized goods are protesting these changes, causing Macri’s approval ratings to plunge.

Reversing over a decade of unsustainable fiscal spending and protectionist economic policies can take time and be painful for many Argentinians. As President Macri recently said, “you can’t change 15 years in 15 months.” Yet, Argentina’s pivot has been remarkable and foreign investors are taking notice.

There are risks involved with investing, including possible loss of principal. In addition to the normal risks associated with investing, international investments may involve risk of capital loss from unfavorable fluctuation in currency values, from differences in generally accepted account principles or from social, economic or political instability. Emerging markets involve heightened risks related to the same factors as well as increased volatility and lower trading volume. Securities focusing on a single country may be subject to higher volatility.

The information provided is not intended for trading purposes and should not be considered investment advice.

Carefully consider the Funds’ investment objectives, risk factors, charges, and expenses before investing. This and additional information can be found in the Funds’ full or summary prospectus, which may be obtained by calling 1-888-GX-FUND-1 (1.888.493.8631), or by visiting www.globalxetfs.com. Read the prospectus carefully before investing.

Shares are bought and sold at market price (not NAV) and are not individually redeemed from the Fund. Brokerage commissions will reduce returns. Global X NAVs are calculated using prices as of 4:00 PM Eastern Time.