The Global X China Innovation ETF (KEJI) returned -17.09% during Q3 2021. In comparison, the MSCI All China Index which serves as the benchmark for KEJI returned -13.34% over the same period. In this commentary, we discuss general market conditions in China and what impact they had on KEJI’s performance.

The performance data quoted represents past performance and does not guarantee future results. Investment return and principal value of an investment will fluctuate so that an investor’s shares, when sold or redeemed, may be worth more or less than their original cost. Current performance may be higher or lower than the performance quoted. For performance data current to the most recent month end, please click here. Total expense ratio: 0.75%

Headwinds in Q3 presented challenges for China’s economic recovery. A Delta variant outbreak that started in Nanjing and spread around the country dampened consumption while a slowdown in the property market contributed to slower growth. Towards the end of September, the possibility of a default by Evergrande, a massive property developer with $300bn in liabilities, put a spotlight on weaknesses in the Real Estate sector. These factors led to China slightly undershooting expectations with 4.9% GDP growth in Q3.

More importantly for KEJI, the ongoing regulatory crackdown on the tech industry not only picked up pace in Q3, but also spread to other sectors. These regulatory moves heightened investor scrutiny of Chinese equities, but KEJI’s portfolio managers reckon that the tightening may have peaked out for reasons explained below. Certain headwinds will likely continue to slow China’s growth as it enters Q4. However, the fund’s portfolio managers believe it is unlikely that Evergrande will bring about an explosive Lehman-style crisis. Furthermore, some short-term headwinds may create long-term opportunities, such as power shortages in the northeast, which underscore the need for more clean energy development. 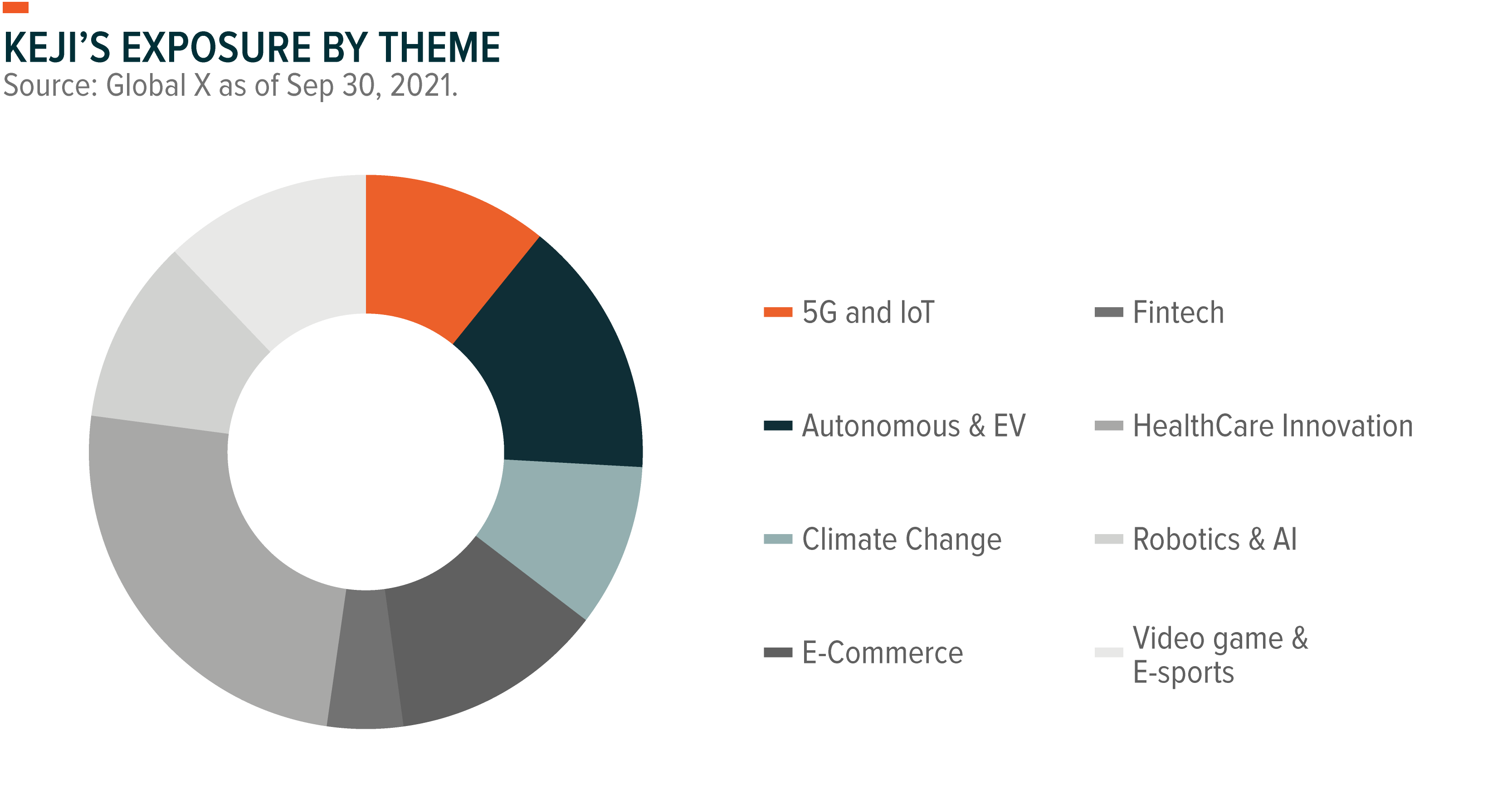 Year to date, growth-oriented stocks have generally suffered more than the broader MSCI All China Index. Yet KEJI’s managers are confident that China has lots of growth stocks waiting to be discovered, and that the losses can be covered some time as long as they focus on identifying genuine growth stocks. The fund expects to keep high exposure to leading stocks in clean energy, EV battery, smart grid, biotech, fintech, semiconductors, automation among other high growth themes. 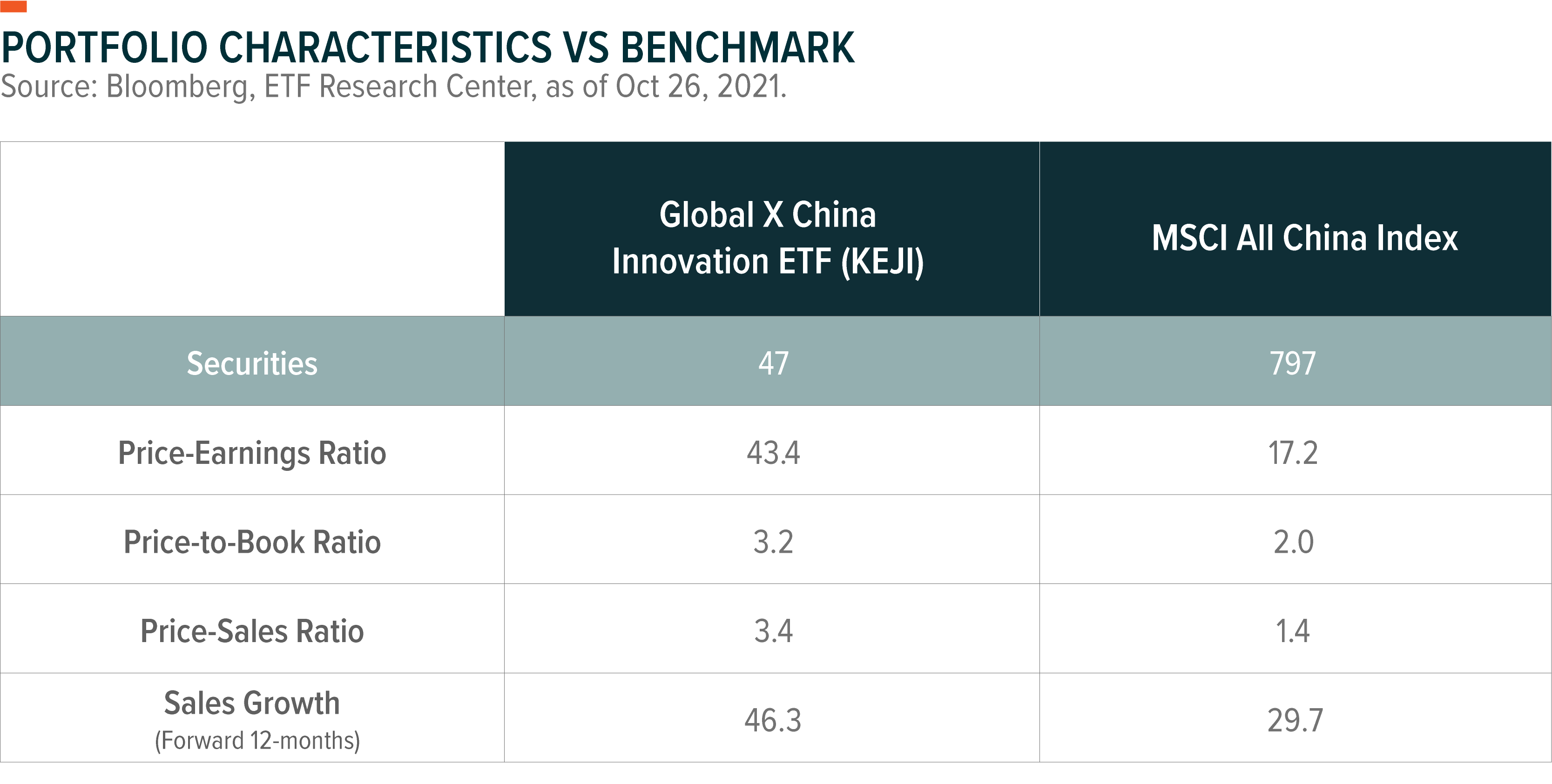 An unprecedented wave of regulations centered on internet platforms has cooled down market sentiment substantially. After few months, however, the fund managers are of the view that the regulation overhang has already peaked out as relevant news becomes less frequent. The rationale behind that is that first, the most important regulations to address social problems caused by internet platforms have already been released. Second, heavy regulations would likely have a negative influence on employment and given the recent downward pressure from the property sector, the government might have to slow down the regulatory push. Also, from a long-term perspective, the managers believe that the explosion of regulation during Summer 2021 is likely to be followed by much lighter regulations in forthcoming years, as the highest priority regulations that might have taken years to roll out were rolled out in a much shorter timeframe. Currently, KEJI still has meaningful exposure to internet platform companies, albeit to a lesser degree than before.

Recently, a series of influential issues have emerged in China including power shortages and a weakened property market. Each looks negative for the economy, but in some respects, they can become positive developments for China’s economy and the fund, as explained below:

Regulatory uncertainty is a persistent risk in China equity markets because of the government’s heavy involvement (both positive and negative) across a wide range of industries. But this sort of risk was generally manageable. Policy overhang tended to come out sector-specifically and intermittently, such that the risk could be managed through portfolio diversification. However, it didn’t work during this summer as numerous regulations came out at the same time across several industries.

It is crucial to ask why so many regulations were unleashed at this time round. In general, these regulations have good motivations to solve social problems caused by business aggressiveness or malpractices. This time, however, the political cycle seems to explain more: as China heads toward the third term of the Xi administration next year, high ranking officials seem to have an incentive to roll out populist policies welcomed by the general public, even if it goes against business interests. Although China has no direct election system to reflect the people’s will, the central government is very keen to win people’s support through policies.

Taking this into account, the pace of regulation introduced during Summer 2021 seems unlikely to continue into the next few years.

The likely default of Evergrande, the largest developer in China, dragged down the market in late September. Some consider it to reflect chronic problems in China’s Real Estate sector (high debt and a bubble) and could even be another “Lehman Brothers” moment.

But we have a different view on this issue. First, Evergrande is not a universal phenomenon in China, but rather a unique case. How did Evergrande become one of the largest developers in China? It is simply because other developers didn’t expand too much to be in line with government guidelines of curbing leverage. The Chinese government has long tried to curb borrowing-based expansion. Most developers followed the policy direction by lowering their leverage ratio, except for a few developers like Evergrande. In our view, most other listed developers have manageable balance sheets.

Second, Chinese banks have much more prudent balance sheets compared to US investment banks during the subprime mortgage crisis. Thus, we believe the likely default of Evergrande won’t trigger any financial contagion risk. The Chinese banking system has built up massive loan loss reserves in the last decade as well as tier 1 core capital. In the first half of 2020, Chinese banks’ exposure to Evergrande was around 0.24% of total lending. That is manageable because they have more than 3% loan loss reserve and 200% non-performing loans (NPL) coverage in their balance sheets.1 For comparison, US and European banks now have less than 1% loan loss reserve ratio on average. Chinese banks’ leverage ratio (assets to equity) looks prudent at a level of around 10x. In contrast, US investment banks had around 30x leverage ratio in 2008.2 These highly leveraged investment banks and financial institutions in the US faced sudden capital shortfall and consequently bank runs.

In conclusion, China’s banking system is far from the 2008’s global financial crisis because they have a better buffer.

Of course, the likely default could have some ripple effects on the whole economy. The Real Estate sector contributes about 20% to GDP directly and indirectly. But we expect other positive developments to offset that impact. First, corporate investment might be supportive of the economy thanks to strong export growth in the last 1.5 years. Second, the government might step in to boost infrastructure projects through fiscal spending and local government bond issuance.

Counterintuitively, any possible sluggish property market conditions could provide good opportunities to boost the equity market, as both asset classes are a substitute to each other. China has vast domestic savings, but more than half of household assets are still tied up in Real Estate.3 The government has shown a strong will to divert these savings to more productive areas like capital markets, but those efforts failed. However, lower expectations on property price appreciation should create an incentive for households to move assets into the equity market.

Since late September, electricity rationing has occurred in some provinces, affecting certain energy-intensive industrials, which has negative implications for GDP growth.

There are two main reasons behind these shortages. The first is a mismatch of supply and demand for coal. In August 2021, industrial production grew 14% year-over-year (YoY) while coal domestic production grew 4.4%. Domestic coal production is critical as 90% of coal consumed in China is locally produced.4 Geopolitical tensions with Australia worsened the supply conditions.

Second, the central government’s firm commitment to reducing carbon emissions has forced local governments to implement power rationing as each province is required to meet carbon reduction quotas before the year-end.

The power shortage creates uncertainty for the economy, however, from a long-term perspective, it should be a positive development for KEJI clean energy positions, because these trends not only could possibly push the coal power tariff up to 20% in China in the near term, but also could help solar and wind power become more economic and profitable. Also note that higher costs for coal and gas power generation is likely a common phenomenon around the world.

The recent increases in raw material costs are likely to put a dent on solar volume growth, as solar panels became expensive this year, for the first time in the last ten years. However, the multi-year outlook is even more promising, with higher coal and gas power tariffs and global commitments to reducing carbon emissions.

KEJI owns a few major solar, wind and smart grid stocks. A couple of battery stocks in the portfolio are also relevant to battery-based energy systems which will likely be in rising demand to tackle intermittent power generation problems.

Q3 was challenging for KEJI and the Chinese economy as a whole. The headwinds of regulation, power shortages and the Evergrande crisis weighed on KEJI’s performance. Some of these headwinds will likely persist into Q4, but at the same time, they can create opportunities for certain thematic segments over the long-term. Furthermore, the portfolio managers still believe there are growth stocks waiting to be discovered.