Economic uncertainty amid trade war tensions may have some investors questioning the viability of investment in China. However, several macro trends make the Chinese economy more resilient than what headlines may suggest, even if the tit-for-tat trade conflict with the U.S. proves to be an extended affair.

These are two heavyweights going at each other, so the implications are not insignificant. But it is worth noting that the estimated $500 billion of Chinese exports to the U.S. account for only 20% of the total value of China’s exports. That means the U.S. tariffs on $50 billion worth of goods thus far affect only 2% of all Chinese exports.

Those numbers align with the dramatic shift in China’s economy. China is much less export-driven than it has been historically and exports account for far fewer of China’s GDP today versus just ten years ago. Likewise, final consumption expenditure as percent of GDP in China has grown to 38% of GDP since 2010 despite high GDP growth, which suggests that consumption is increasing faster than its notable GDP growth.

That is not to say that the row with the U.S. is a non-event for financial markets. Probably not helping investor nerves recently is a Shanghai Composite Index that entered bear market territory in June, a yuan that has lost ground to the dollar, and a high yield bond market that has struggled throughout the year.1

Domestic and international demand for Chinese goods has remained robust thus far. Export and import data have not yet shown ill effects from the trade war bluster. Exports rose 12.2% year-over-year in dollar terms in July and imports jumped 27.3%, with the country achieving an overall trade surplus in July of $28 billion.2

August data will reflect the first full month of tariffs, so the view could change. But it appears China will not be caught flat-footed. Less reliance on exports is one positive. Another could be U.S. protectionism providing China a runway to expand its ties abroad in areas like Latam, South East Asia, and Europe —especially if Beijing casts its efforts in the right light.

A hallmark of President Xi Jinping’s China its increasingly willingness to cooperate with other countries in Asia. Recent examples include China joining regional powerhouses like Japan and Korea at the Tokyo Summit in May 3 and its interest in collaborating with the Association of Southeast Asian Nations (ASEAN), the Regional Comprehensive Economic Partnership (RCEP), and the Comprehensive and Progressive Agreement for Trans-Pacific Partnership (CPTPP).4

China has stepped up its efforts globally as well. It now purportedly supports World Trade Organization (WTO) reform 5 and has been a driver of competitive development initiatives across Asia and Africa, notably the ambitious Belt and Road infrastructure project. China is also an advocate for various emerging market development institutions, which often provide greater funding while imposing fewer conditions than the International Monetary Fund (IMF) and the World Bank.

The rise of the Chinese consumer is real 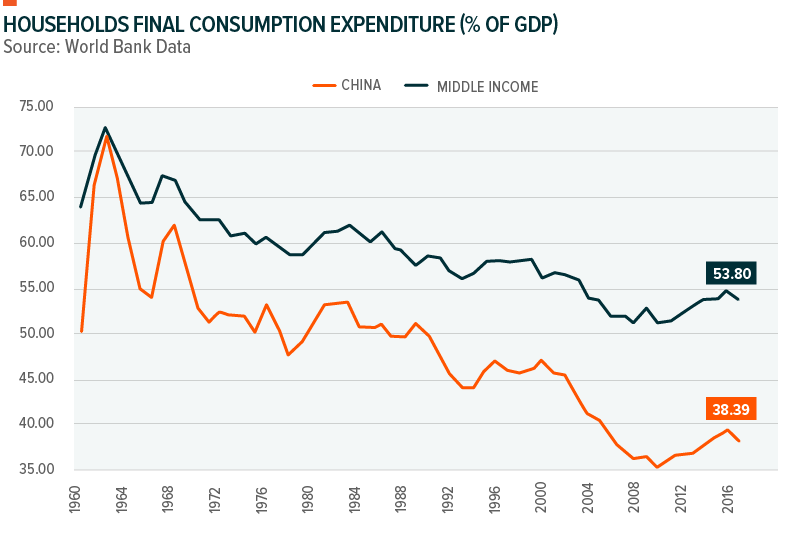 Several categories illustrated the power of Chinese consumption in 2017. China remained the world’s largest auto market for the ninth straight year, and the largest market for electric vehicles.8 The luxury retail market was notable too, where some of China’s more than 400 million millennials drove a bounce back in retail sales last year.9 Helping this was China’s massive (and growing) e-commerce market aided by extending greater connectivity to rural China.10

As consumer habits continue to evolve amid China’s new outward approach, investment opportunities may result from potential shifts in spending. Consumer services like entertainment, education, healthcare, and travel could all benefit from these changes. High-income Chinese figure to be a target, as well as traditional Chinese retailers in countries like Japan.

China’s relationship with Japan is particularly significant, not only because Japan is the world’s fourth-largest economy, but also because trade relations have accelerated since April due to U.S. tariffs and supply chain disruptions.11

Relative political and policy stability a plus for China

China appears well-positioned politically and policy-wise to play the long game on tariffs, at least compared to the U.S. Questions about Beijing’s approach to its dealings with the Trump administration have been growing in China, especially after rather public declarations in May that a conflict would be avoided.

But even as confidence in Xi’s administration and the economy has waned some, China has prepared. Prior to tariff implementation, the People’s Bank of China (PBoC) freed up more than $100 billion for commercial banks by reducing reserve-requirement ratios. The central bank’s goal: to increase lending and support economic growth.12

Also working in China’s favor is that it is the world’s second largest owner of U.S. bonds, trailing only the Federal Reserve. China could attempt to weaponize these holdings, but that type of power-play seems highly unlikely given the potential global market disruption.13

As for the U.S., the looming November midterm elections could add a significant variable to its current stance on trade policy. Midterms typically result in the incumbent party losing seats in both houses, so the prospect of the Trump administration losing protection provided by the current Republican-controlled Congress may affect the tenor and direction of negotiations.

Mid-level talks between the U.S. and China commenced in late August as another $34 billion in tariffs went into effect. In addition to the $16 billion implemented already, the Trump administration has plans for another $200 billion.

Understandably, that could ratchet up existing anxieties about investment in China. The trade scuffle with the Trump administration is a test for China on its journey to global superpower, which now requires it to ramp up its geopolitical learning curve. However, China’s structural positives appear influential enough to keep it as a compelling investment option, including:

Related ETFs: The Global X China Consumer ETF invests in a basket of stocks that operate within the consumer discretionary and consumer staples sectors in China.

4. The Association of Southeast Asian Nations (ASEAN) is a community of 10 countries in Southeast Asia united under various shared legal rules and values. The Regional Comprehensive Economic Partnership (RCEP) is a proposed free trade agreement with negotiations led by ASEAN; it includes 10 ASEAN members and six ASEAN free trade agreement partners, including China. The Comprehensive and Progressive Agreement for Trans-Pacific Partnership (CP TPP) is a broad trade agreement between 11 members in Asia, Oceania, and the Americas. Currently, it does not include China or the US. The three organizations have several overlapping member countries, many of which have separate bilateral and multilateral trade agreements with and without China.

Investing involves risk, including the possible loss of principal. International investments may involve risk of capital loss from unfavorable fluctuation in currency values, from differences in generally accepted accounting principles, or from economic or political instability in other nations. Emerging markets involve heightened risks related to the same factors as well as increased volatility and lower trading volume. Securities focusing on a single country and narrowly focused investments may be subject to higher volatility.