About the only thing faster than the speed at which China implemented new policy restrictions on big tech, online education, and gaming companies was the speed at which their equities sold off. Sweeping new regulations on some of China’s most influential companies and areas sensitive to social development shifted China’s economic policy and upended markets. Previously, the approach was largely single-minded: economic growth, no matter the cost. Now, China’s using stricter controls to discourage monopolistic business practices and encourage more sustained, equitable growth.

In this new and evolving regulatory regime, we see several different ways to assess the current investment landscape in China. Importantly, the recent regulatory-induced volatility can be an important reminder for investors: Beijing doesn’t move like Washington.

To conceptualize this regulatory shift, we think of the Chinese government as a gardener who prunes a plant (regulates business) to ensure better nutrition for the whole plant (the economy). Old, stagnant branches (large caps) get cut back (enforcement of anti-competitive laws), which creates opportunities for newer, healthier, and faster-growing branches (small caps) to capture the sunlight and nutrients they need. Without the competition from the old branches, the new growth has more freedom to develop (higher incidence and impact of innovation).

Initially, the pruned plant’s scant appearance can be a shocking sight (the selloff in Chinese equities). But then the new growth starts to take shape and chart its own path (innovation). Eventually, the plant’s overall health improves (the economy), helped by the blossoming foliage (companies) that the pruning gave a chance to flourish. For investors questioning investment in China due to the recent regulatory upheaval, we believe the lesson here is two-fold.

First, unlike the U.S., the Chinese Communist Party (CCP) can prune whenever and however it wants. It can move from draft legislation to law enforcement at a staggering pace. Contrast that with Washington’s laborious process of drafting, passing, and enforcing legislation. In theory, legislative speed is advantageous, but in the capital markets world, it’s a risk, especially with this just the latest drama between China and the U.S.

And second, after initial market shocks like this subside and investors assess the changed landscape, the next step is to ask, where are the opportunities?

In our view, the new regulatory track can be traced to an overriding principle of the CCP: No entity supersedes the state or the state’s economic goals. Unencumbered growth was long the goal for China, and grow it did, helped by foreign investment. But now it seems clear that the next phase of China’s economic development should be geared toward helping smaller firms thrive.

A major reason for the shift is that the government came to view China’s big tech platforms as too big, with their dominant market shares, data collection, and pricing power.1 Another reason is how their business models can run counter to the party’s social agendas in certain areas. For example, the government views the after-school tutoring that online education platforms facilitate as an obstacle to boosting the country’s declining birth rate.2

With regulations designed to disrupt the cycle of market dominance by large caps, we believe smaller firms looking to innovate have an opportunity to outperform the giants they compete with. Regulatory scrutiny on smaller companies is much less these days given their comparative lack of market share, power, and threat to the government’s agendas. Year-to-date, the ETF market has recognized this opportunity. Total year-to-date return for the iShares China Small-Cap ETF is +8.38%, compared to the iShares China Large-Cap ETF at -12.57%.3 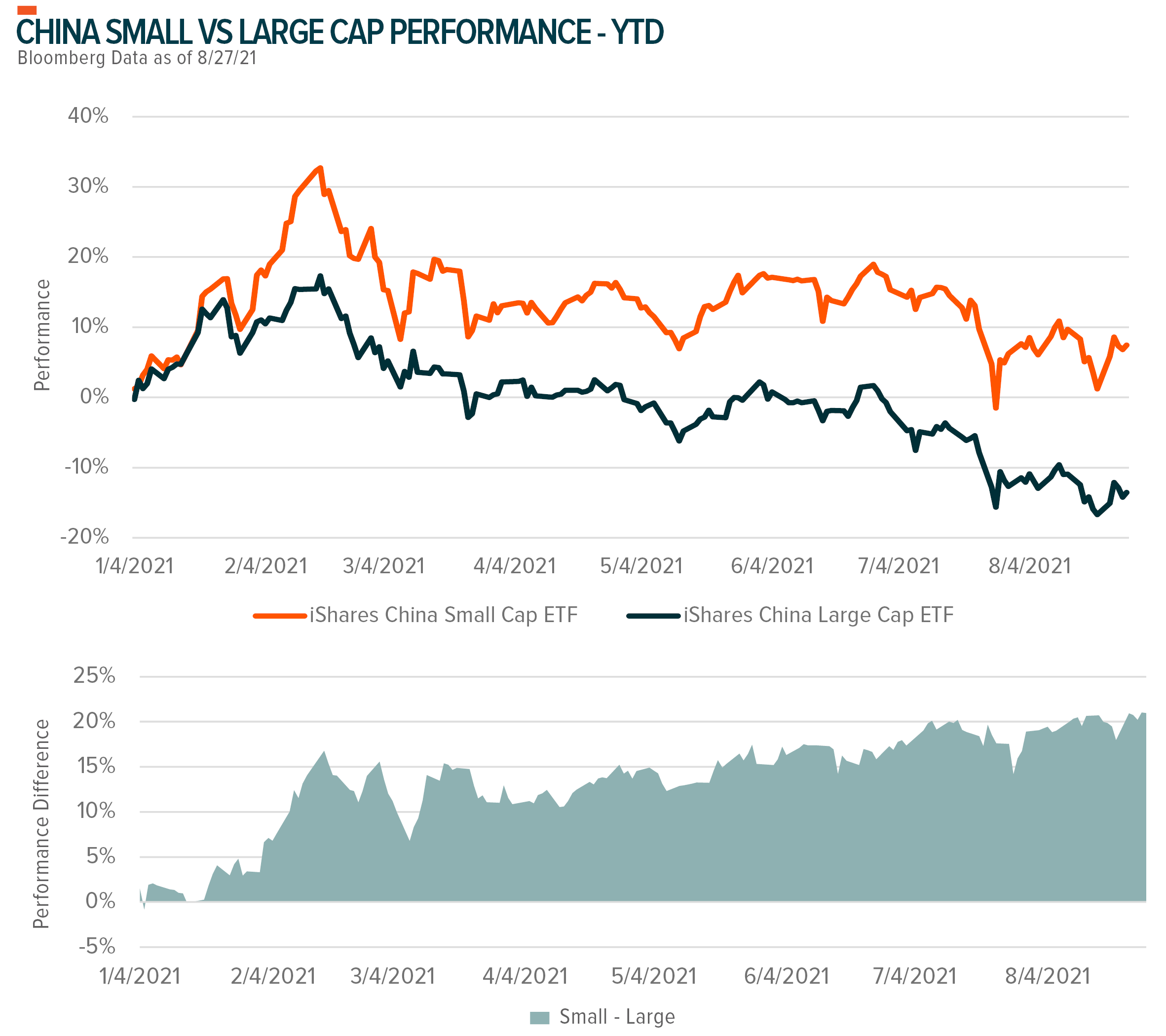 China often has the luxury of playing by its own rules in the global economy given its cheap labor and position in the supply chain. Also, stable, one-party rule means the government can take a longer-term view than other governments. Combined, these dynamics make China something of a wild card when assessing its investment risks. It’s understandable that the initial response to Beijing’s tone shift was panic from investors trying to decipher if the regulations were simply guardrails or part of something bigger.

After the July announcement that online education companies can no longer be for-profit, raise capital, or go public, their stocks sold off dramatically. The already battered Hang Seng Tech Index, which tracks the 30 biggest Hong Kong-listed tech firms, also tumbled, continuing its 2021 trend. In the U.S., the selling contributed to the biggest monthly fall in Chinese American Depository Receipts (ADRs) since the Global Financial Crisis.4

Creating more uncertainty was Beijing’s seeming indifference to the selloffs, the magnitude of which raised the possibility of delisting from American exchanges. The government took steps to restore calm in financial markets, including cash injections to prop up stocks, but for how long they plan to keep the liquidity going is unknown.5

A bigger-picture concern that contributed to the selloffs were questions about whether Beijing’s new regulatory posture signals a more aggressive pursuit of technology independence. One of its longstanding goals and a main theme of the Fourteenth Five-year Plan for national economic and social development is a commitment to strengthening technological self-sufficiency in critical sectors.6

The semiconductor industry is a prime example, given that China’s tech companies currently lack the ability to produce advanced chips. China relies on other firms for chips, and many of those firms rely on equipment underpinned by foreign technology, namely from the U.S.

It is confounding to think about an extreme scenario where China and the U.S. decouple from today’s intertwined technological supply chain that keeps the global economy moving. But relations between the two sides have been tense in recent years and show few signs of abating. Any moves that can be interpreted as China trying to change the status quo can make something like decoupling risk feel that much more acute. Also weighing on investors during the July selloff was a high-level meeting that Chinese officials described as leaving the relationship in a “stalemate”.7

We believe the market’s response to China’s regulatory moves is a natural product of Beijing’s legislative might and ambition. China goes at its own pace, so the risk of extreme scenarios can cast long shadows over the investment picture. With time to value the risks and the potential benefits, including increased participation in the economy, innovation, and healthier growth, we expect markets to calm and identify new opportunities that these moves create. Still, portfolio exposure needs to be particularly thoughtful, well-balanced, and based on risk profile and time horizon. Because as ever, investing in China is different.