Considering Preferreds in an Income Portfolio

Low and likely falling interest rates coupled with tight credit spreads are limiting the bond market’s upside and leaving investors searching for alternative sources of yield. While investors often have specific allocations to corporate bonds and high yield debt, not all portfolios include dedicated allocations to preferred stock. In this piece, we shed light on key developments in the debt markets and discuss reasons why preferreds ought to be considered for income-focused portfolios. Discussion topics include:

Investment grade and high yield debt issuance has grown tremendously as the economy has strengthened and the Fed has kept interest rates generally quite low compared to historical standards. At the same time, demographics trends like baby boomers reaching retirement age has kept demand for fixed income instruments high. Likewise, even more aggressively accommodative central bank policies abroad have made US Corporate Bonds relatively attractive for foreigners. As such, companies have aggressively taken advantage of these dynamics to issue low cost debt to investors. 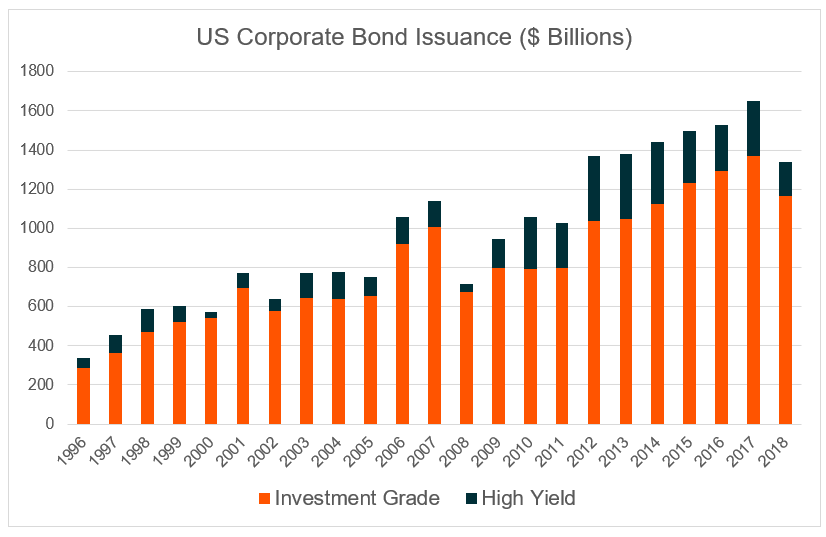 As the corporate market has swelled, debt has become riskier. There has been significant growth in lower rated parts of the bond market, like the BBB rated segment which sits just above junk status and has tripled in growth since 2009 to now make up over half of investment grade debt. In the leveraged loan market, so called “covenant lite” loans account for 80% of the market today compared to just 6% in 2008, resulting in fewer protections for investors.1

While typically increased risk is associated with higher expected returns, the bond market has demonstrated the opposite move. Investment grade and high yield bonds are showing lower spreads up US Treasuries than their historical average, indicting a smaller risk premium for taking on their credit risk. 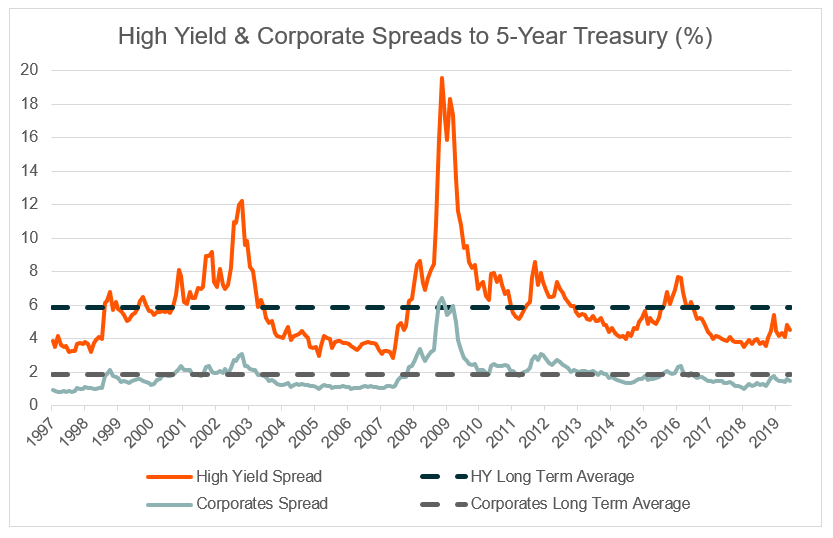 Preferreds As an Alternative

Preferreds, on the other hand, currently look more appealing as spreads are more in line with their historical averages. While high yield debt has spreads that are 133 basis points lower than their long term average, and investment grade debt is 36 basis points lower, preferreds are virtually in-line with historical figures. This shows that they are more fairly priced based on historical data than traditional corporate debt that looks expensive.

Preferred stock is often analyzed alongside corporate & high yield bonds because of its yield-focused characteristics and fixed income-like behavior. Preferreds sit junior on the capital structure to traditional bonds, and trade on an exchange offering additional liquidity. For portfolio construction purposes, we believe they should be considered alongside corporate debt, high yield, and other income-generating asset classes like emerging market bonds and senior loans as a source of potential income. Particularly when compared to corporate debt, we believe now may be the time to rotate money away from the more traditional portions of the fixed income market and into preferreds. 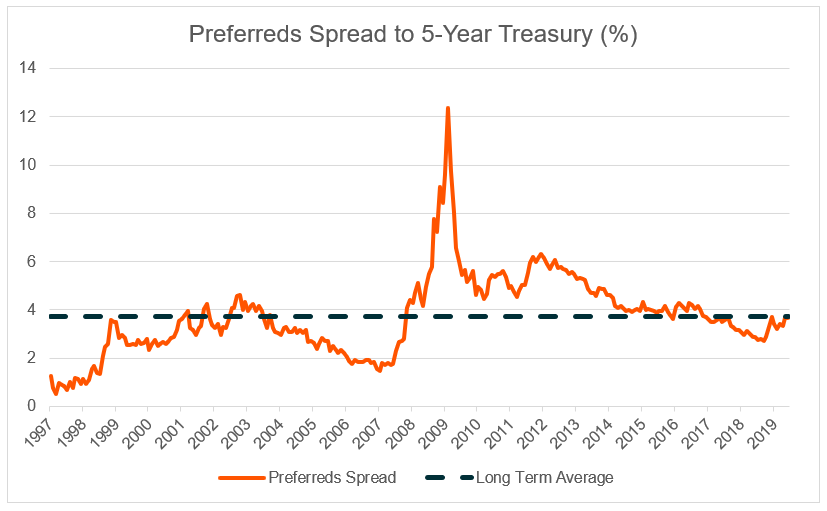 The Health of the Banking Sector

A defining characteristic of preferreds is the prevalence of issuance by banks, because of the incentives to reduce leverage post-financial crisis and for regulatory reasons that include preferred stock being part of certain Tier 1 capital ratios. Therefore, the health of the banking sector plays an important role in determining the riskiness of the preferred market.

While the 2008 financial crisis put great pressure on the preferred market, the banking sector has cleaned up significantly over the past decade. This has been driven by both operational and regulatory changes that have helped de-risk the profile of banks. For example, the Fed’s shift to paying interest on reserves has helped dramatically increase Tier 1 capital from 10.7% in Q1 2009 to 13.4% ten years later. 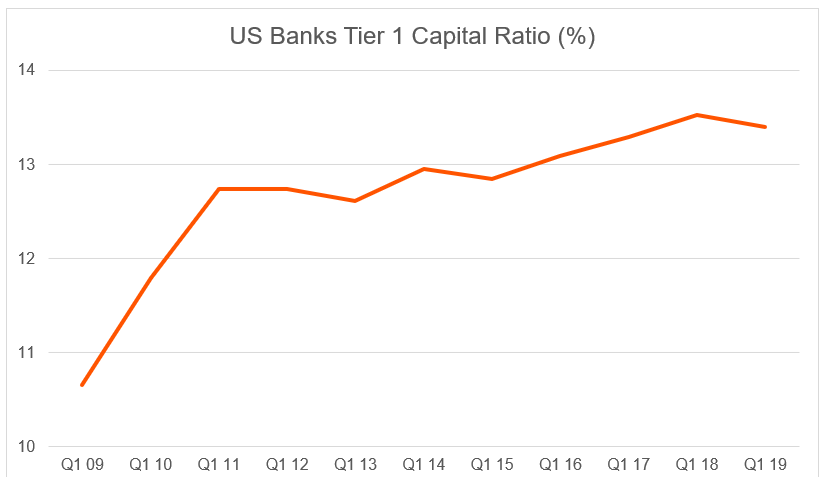 As a result of these de-risking efforts, in late June of this year, the Fed announced that 18 of the largest banks passed their stress tests, and gave approval for all of them except one to raise dividends and increase share buybacks.2 It does raise the question of growth potential of the banking sector going forward in the eyes of a common equity holder, with such a focus being placed on risk management, but from a creditor or preferred equity holder’s standpoint, these are viewed as positive developments. 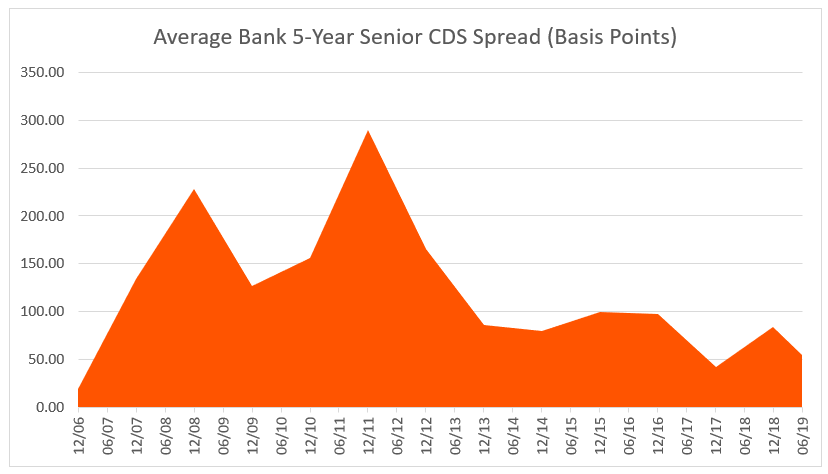 Generating yield in the current environment is proving to be challenging and may be getting harder as the Fed indicates a more dovish approach.

With the banking sector paring back risk, interest rates expected to remain low with dovish Fed policy, and credit spreads showing more value than other traditional fixed income instruments, we believe there is an overall positive backdrop for preferreds in the current market environment.

Although not structured as traditional bonds, they have historically displayed bond-like behavior, and often come with tax advantaged treatment that normal bonds don’t offer, including a portion of the dividends taxed as Qualified Dividend Income (QDI), rather than ordinary bond interest. 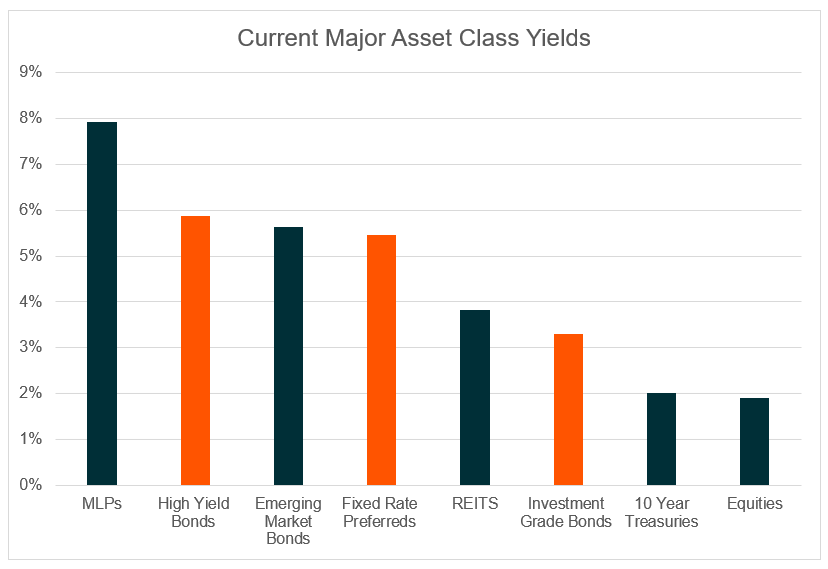 PFFD: The Global X U.S. Preferred ETF invests in a broad basket of U.S. preferred securities, providing benchmark-like exposure to the asset class. It seeks to provide investment results that correspond generally to the price and yield performance, before fees and expenses, of the ICE BofAML Diversified Core U.S. Preferred Securities Index.

Investing involves risk, including the possible loss of principal. Preferred stock is subject to many of the risks associated with debt securities, including interest rate risk. In addition, preferred stock may not pay a dividend, an issuer may suspend payment of dividends on preferred stock at any time, and in certain situations, an issuer may call or redeem its preferred stock or convert it to common stock. High yielding stocks are often speculative, high-risk investments. These companies can be paying out more than they can support and may reduce their dividends or stop paying dividends at any time, which could have a material adverse effect on the stock price of these companies and the Fund’s performance. PFFD is non-diversified.