Drivers of Four Key Segments in Robotics and AI

Technological advancements are enabling robotics and artificial intelligence (AI) to play an increasingly impactful role in a variety of industries and in our daily lives. In this piece, we look at the key trends and developments in four key segments of the robotics and AI space, including:

While robots are increasingly entering into new industries, the oldest and most established use cases stem from the manufacturing space. In the early days, large robotic arms were programmed to move heavy objects, such as picking and placing automobile parts in a factory. Today, cutting-edge technologies such as vision recognition, machine-learning, failure prediction and collaborative robots (co-bots) are vastly extending the capabilities of machines and revolutionizing the manufacturing processes.

Between 2009 and 2017, the unit sales of industrial robots increased from 60,000 to 381,000 annually, a 26% compounded annual growth rate (CAGR).1 The auto industry has been at the forefront of this adoption, contributing the largest share of demand, as efficiency and precision remain top priorities. Autos are followed closely by the consumer electronics industry, primarily using robots for smaller-scale tasks such as machining and assembly of the latest gadgets. Together, the two industries have comprised of about two-thirds of total robotics purchases.

Advancements in effectors – end-of-arm tooling (EOAT) devices that grip and handle items – are helping to bring robotics to new industries. For example, soft grippers can delicately handle fresh food items, while vision-quipped devices can accurately pick a tool from a mixed bin.  With advancements in motion and sensitivity, effectors also allow robots to manipulate very small, delicate parts, approaching the abilities of the human hand. EOAT devices are also easy to swap out for other types of tools, increasing a robot’s flexibility to perform a variety of tasks.

Further growth in industrial robotics is driven by the introduction of co-bots that are safe to operate alongside humans. In the past, robots were confined to a cage or close-ended environments to avoid accidents with humans. But now they are equipped with a host of sensors, deep learning capabilities, and soft materials to protect their human colleagues. Co-bots are also often lighter, more mobile, and cost less than previous robotic machines. The global market for co-bots is expected to grow from $710 million in 2018 to $12.3 billion in 2025.2 By then, co-bots should represent about 35% of all industrial robots, up from 11% in 2018.3

China is the world’s largest industrial robotics market by far; it’s larger than Korea, the US and Japan combined.4 Nevertheless, the industrial robotics market seems ripe for further growth in China given its low robot density, i.e., number of robots per 10,000 workers. That is important because as wages continue to rise in China, manufacturing jobs increasingly move to lower-cost Asian peers like Vietnam, Cambodia and Thailand.

The result is increased robot demand as China seeks to maintain its leading manufacturing position. China’s robot density is low at 97 robots per 10,000 employees in the manufacturing industry – only slightly above the world average of 85, but well below more developed peers like Korea (710), Singapore (658), Germany (322) and Japan (308). The Chinese government is targeting a robot density of 150 by 2020.5 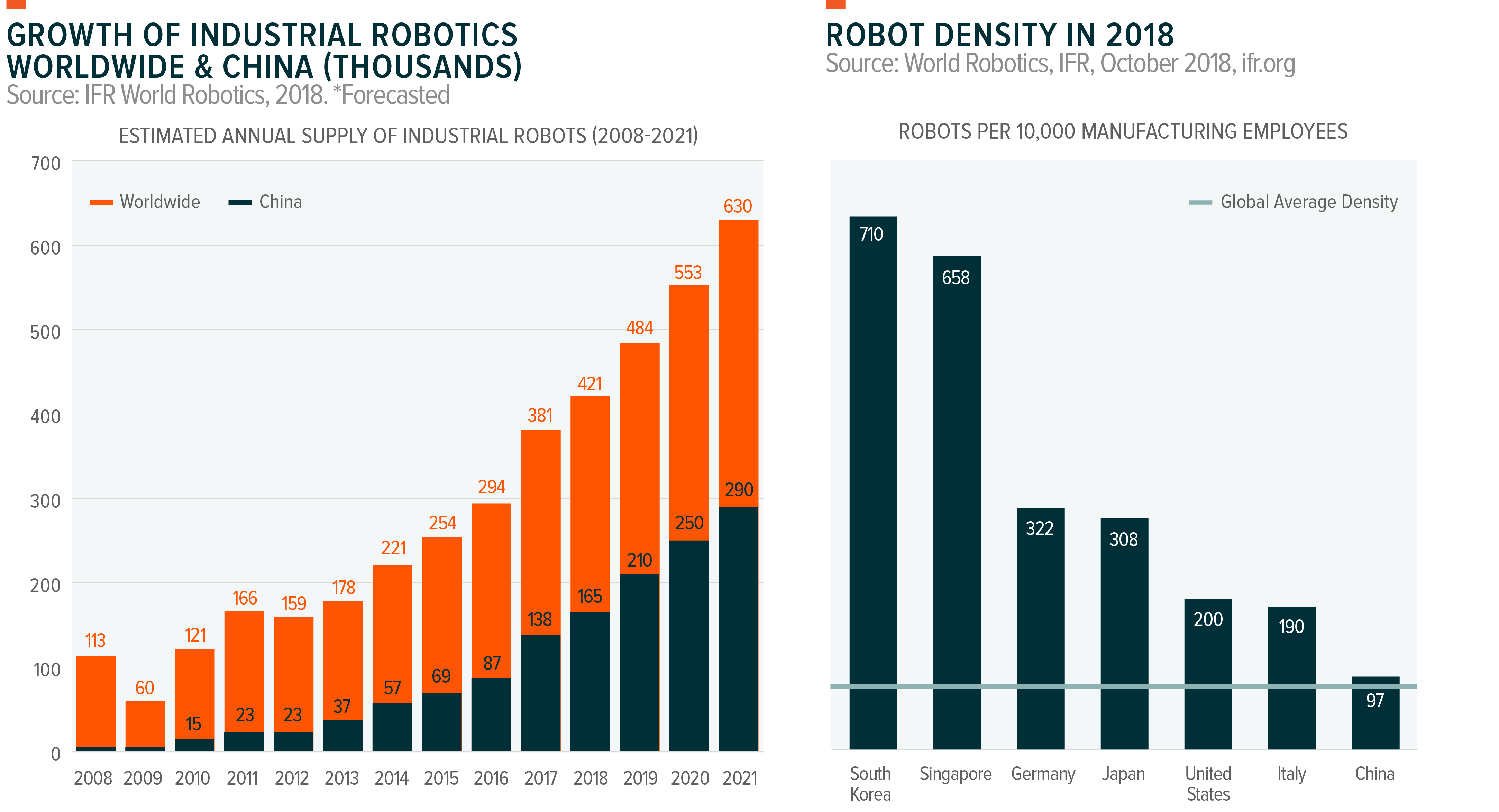 Non-industrial robotics remains a relatively nascent market as engineers and developers look to apply automation technology to new use cases.

Among the fastest growing segments is health care, where robots are already being used to improve patient outcomes with minimally invasive surgeries. Robotic surgeries are overseen by surgeons, who use the machines as tools for more precise incisions or movements that cannot easily be replicated by human hands. Typically, robot use is for general surgery, gynecology and urology, but robotics continues to make inroads into more complex medical procedures. Worldwide, the robotic procedures trend has shown double-digit growth as penetration remains very low outside of the U.S. For example, Intuitive Surgical, a leading company in the space, has only about 1,800 systems installed outside the U.S., compared to over 3,200 in the U.S.6

Other applications of robotics include agriculture, spurred by rising costs and labor shortages. Harvesting and picking without crushing the fruit or vegetable is now common practice for robots. Today’s robotic harvesters are equipped with cutting-edge Graphic Processing Units (GPUs) that can determine product ripeness, LiDAR-based autonomous navigation systems and 3D sensing capabilities.7 In addition, autonomous tractors are being implemented to scan and harvest crops, while drones measure yields and plant health aerially.

The table below shows various examples of non-industrial applications for robots that are gaining popularity.

Drones are prime examples of how technological disruption can often be traced to solving everyday problems. Areas that are difficult to access due to poor infrastructure, dangerous conditions, rough terrain, or crippling traffic are ripe for drone usage. For example, road conditions and limited access to transportation in Rwanda exacerbated the lack of access to prompt healthcare. Today, doctors are able to order blood and medical supplies by text message and have them delivered promptly by drones in remote locations.8

Similarly, in Indonesia, ferry deliveries among the more than 16,000 islands that comprise the world’s largest archipelago is a daunting, expensive, and ecologically unfriendly task. But drone use could revolutionize deliveries of medicine or allow e-commerce platforms to reach remote customers across the country.

Recently, autonomous aircrafts that can be used as air-taxis are an increasing focus for Uber, which expects to start commercial operations around 2023. By flying rather than driving, an UberAIR could get a passenger from San Francisco’s Marina to San Jose’s Downtown in about 15 minutes, instead of 2 hours and 12 minutes by land.9

Other drones have been used for underwater exploration. These drones can dive as deep as 20,000 feet – almost 10 times more than a submarine – and stay underwater for up to 72 hours, allowing them to triple the data surveyed from the ocean floor.10

Overall, the drone market generated approximately $18 billion in 2018 and is projected to accelerate to $42.5 billion by 2024.11 Despite a growing range of commercial and consumer applications, the military segment still dominates the drone market. Further military R&D spending for drones should support near-term growth. The Department of Defense FY 2020 budget requested approximately $3.7 billion for unmanned systems.12 Yet as drone technology and AI systems advance further, the market could reach trillions in value as areas like trucking, shipping, and everyday transport become autonomous.

Thanks to advancements in AI, robots can learn, adapt and react to increasingly complex environments and situations. Smart factories, for example, rely on a host of sensors to collect data including images, measurements, and diagnostics. That data is then fed into AI systems to increase overall efficiency, like alerting engineers to maintenance issues or lapses in quality.

The world’s leading robotics companies have become experts in developing and incorporating AI software into their specialized machines. In the past, training robotics was laborious and required time, capital, and engineering expertise, but AI simulators are becoming increasingly accurate at transferring learning to real world applications. These simulators can run thousands of iterative processes in seconds, creating vast amounts of training data. Only until recently overcoming discrepancy between simulated applications and its transference to the real world has become possible.

Beyond the factory, robotic process automation (RPA) is becoming increasingly common in corporate settings. RPA refers to using software to mimic predictable or repetitive tasks. RPA is particularly effective in replicating rules-based processes such as data migration between internal or external systems, data verification, calculation, or charting. For example, banks use RPA to streamline trade-settlement procedures. Tasks include clearing trades, conducting order research and resolving discrepancies. While human staff requires 5–10 minutes to reconcile a failed trade, a bot can perform the same procedure in a quarter of a second.13

The RPA market is expected to grow at a 31.1% CAGR by 2025 to become a nearly $4 billion market.14 Of course, RPAs are just the tip of the iceberg, as advancements in AI’s capabilities are going well beyond simply replicating repeated tasks.

Demand analysis: no shortage of opportunities

Robots are getting smarter, cheaper, and more dexterous, helping to push adoption of robotics across multiple industries. Yet macroeconomics, demographics and government policies are also driving a growing interest in robotics.

Today’s robots are handling an increasingly diverse set of tasks, given advancements in mechanical engineering, materials science, and artificial intelligence. As each of these areas progress, robotics should continue to gain new capabilities and decreasing costs, resulting in further adoption across a range of segments, whether it is in manufacturing, transportation, health care, or in our homes and offices. Presently, robotics and AI are still at the early stages of the adoption curve as companies across the global economy increasingly consider how to leverage such technologies in their businesses.

13. The Lab Consulting, “Robotics in Banking with 4 RPA Use Case Examples.”

Investing involves risk, including the possible loss of principal. The investable universe of companies in which BOTZ may invest may be limited. The Fund invests in securities of companies engaged in Information Technology, which can be affected by rapid product obsolescence and intense industry competition. International investments may involve risk of capital loss from unfavorable fluctuation in currency values, from differences in generally accepted accounting principles or from social, economic or political instability in other nations. BOTZ is non-diversified.