For the period March 31, 2022, to June 30, 2022 (the “Period”), the Global X Emerging Markets Bond ETF (the “Fund”) sub-advised by Mirae Asset Global Investments (USA) LLC posted a loss of 10.04% (including distributions paid to unitholders). This performance compares to a loss of 12.09% for the Fund’s benchmark, the JP Morgan EMBI Global Core Index (the “Index”) during the same period.

The performance data quoted represents past performance and does not guarantee future results. Investment return and principal value of an investment will fluctuate so that an investor’s shares, when sold or redeemed, may be worth more or less than their original cost. Current performance may be higher or lower than the performance quoted. For performance data current to the most recent month or quarter-end, please click here. Total expense ratio: 0.39%.

Cumulative return is the aggregate amount that an investment has gained or lost over time.

During the Period, risk assets were under pressure as investors continued to price in further interest rate hikes and the U.S. Federal Reserve (Fed) reiterated its commitment to get inflation under control. The Fed began its rate hiking cycle in March with a 25 basis point (bps) hike, followed by 50 bps and 75 bps hikes in May and June. Signs of a slowdown began to emerge as the U.S. Purchasing Managers’ Index (PMI) indicated decelerating growth momentum with the PMI falling to 52.7 in June from 57.0 in May.¹ Increasing fears of a recession due to aggressive Fed rate hiking are appearing to outweigh market concerns of inflation. The US 10-year Treasury rate rose by 66 bps to 2.98% at quarter end as inflationary data and further rate hiking expectations flowed through into the treasury markets.

Russia continued to be a major underperformer due to its ongoing invasion of Ukraine. At the end of March, Russian securities were marked to zero by the Index provider and became untradeable due to sanctions imposed by western nations. Sanctions intensified during the Period as the US Office of Foreign Assets Control (OFAC) decided not to extend the General License 9A, implying that US bondholders would not be allowed to continue receiving payments past the clause’s expiration on May 25. At the time, Russia had about US$100 million worth of interest payments for various USD- and EUR-denominated bonds due on May 27 with a 30-day grace period until June 26. Though Russia announced that it had sent the payments to the National Settlement Depository (NSD) for settlement on the original due date, the General License 9A’s termination and European Union (EU) sanctions implemented against Russia’s NSD left the funds stuck at the NSD. Effectively, Russia defaulted on its foreign currency debt, but contagion to markets were insignificant as investors had expected Russia to default for several months.

Belarus, Lebanon, Sri Lanka, and Ukraine were also among the top five underperformers during the Period. Sri Lanka warned of an unprecedented default and announced to suspend all outstanding debt payments for an interim period in an attempt to save dollar reserves for essential food and fuel imports. Emerging market commodity exporters such as Iraq and Oman continued to benefit from the rise in commodity prices due to Russia’s invasion of Ukraine and the associated impact to oil and gas supply.

During the Period, the Fund outperformed the Index by 205 bps. The Fund’s lower duration relative to the Index, country selections and security selections were all positive contributors to performance, adding 91 bps, 91 bps and 23 bps, respectively.²

We maintained our underweight duration exposure as we expected global bond yields to move higher while credit spreads remain elevated. Our strategy continued to favor overweight positioning in high-yield issuers over the investment grade sector, as the higher yield offered by this sector may offset some of the interest rate risk.

The largest positive contributions came from our overweights to the UAE and Qatar, which added 26 and 23 bps, respectively. With the Ukraine crisis persisting through the second quarter, western sanctions against Russia intensified with the EU announcing its plan to significantly reduce its reliance on Russian oil imports by the end of the year. We maintained an overweight exposure to net energy exporters as energy demand continues to outpace supply and global inventories remain low. Our exposure to lower-rated oil exporter, Nigeria, similarly added to performance by 22 bps. Other positive contributions came from investment grade issuers in the Latin America region including Chile, Panama and Peru. In Peru, political noise decreased following social protests against the increase in the costs of fuel, fertilizer, and food during April and the approval of the pension fund withdrawal in May.

On the contrary, the Fund’s underweight exposure to China detracted from performance (-31 bps). Amid the selloff of risk assets, Chinese dollar government bonds suffered a loss of only 1.5% due to strong local demand for these bonds. As the Fund held an underweighted position, its exposure to China was negative based on relative performance. Furthermore, our overweight positions in Colombia, Morocco, and Senegal lagged in performance. Colombia detracted as leftist Gustavo Petro won the presidential elections and markets grew wary of the possibility that the new president, once inaugurated on August 7, could enact more radical proposals promised in his campaign, such as the ban on oil exploration, open-pit mining and fracking.

During the Period, we increased our exposure to high-quality bonds to reflect the risk of an economic slowdown amid market concerns over the Fed’s intensive tightening policy. 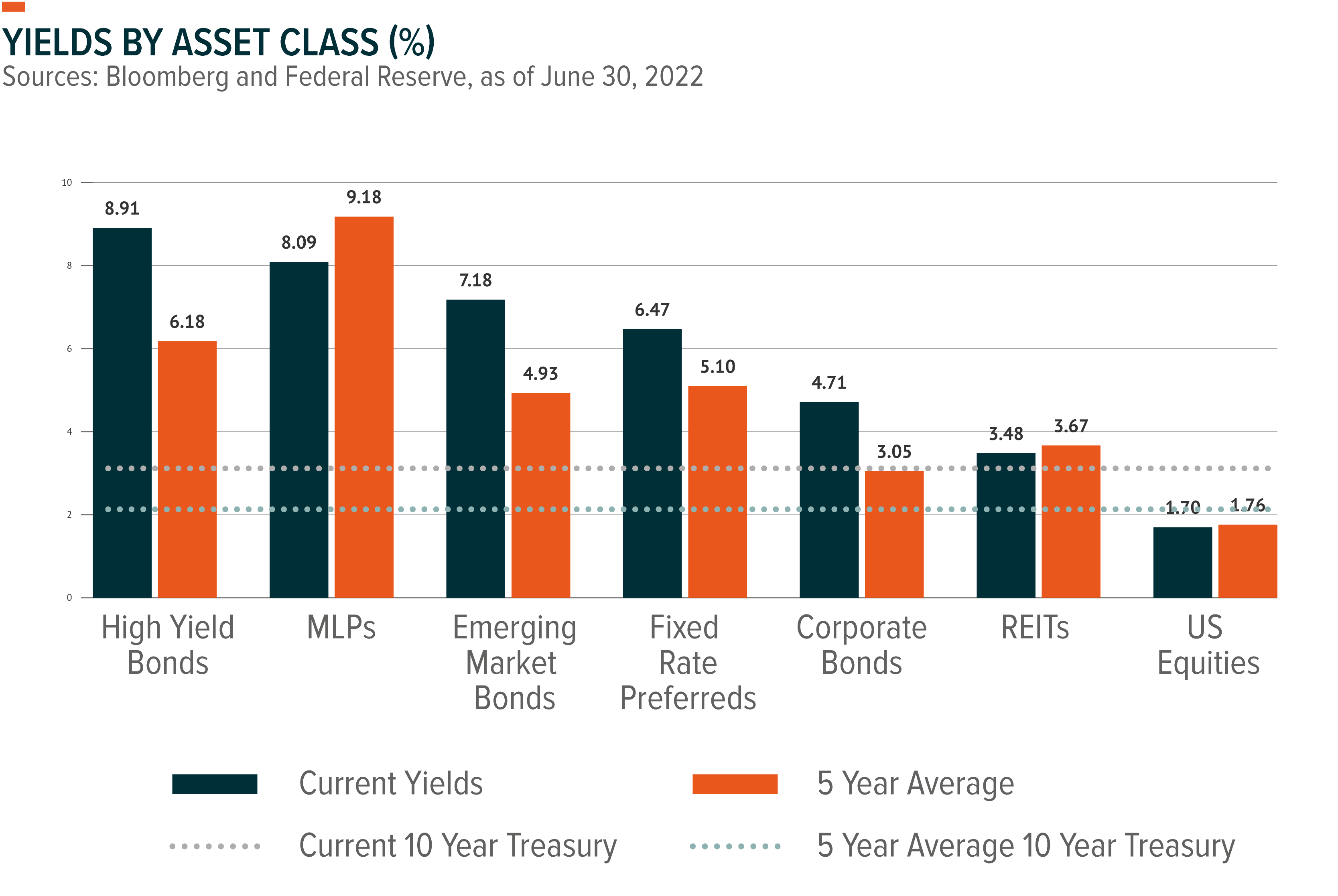 With both the war in Ukraine and growth uncertainties due to COVID-related restrictions in China continuing from the previous quarter, investors are still facing major headwinds with regards to supply-chain and commodity export disruptions. Against this backdrop, global growth is declining and recession risks are rising, while the threat of inflation remains. As the Fed continues to fight rising inflationary pressures in the US by tightening its monetary policy, the risk of selling pressures is high as investors look to hedge their positions. Though it appears that markets have priced in a reasonably aggressive hiking path for the Fed with at least an additional 150 basis points in rate hikes by the end of this year, neither the pace of inflation nor the risks of recession are clear.³

Overall, we plan to maintain a more conservative stance as we expect the risk-reward mix to continue tilting towards down-side risks rather than the upside potential. We plan to continue moving up the credit quality spectrum by adding high-quality issuers while reducing our lower quality and high-beta exposures. We have a positive outlook on the investment grade corporate sector as it should provide better mitigation from downside growth risks given that the credit fundamentals remain solid. Our regional allocation favors Latin America over the Asian and the Middle Eastern regions as higher commodity prices and hawkish regional emerging market central banks may provide some safeguards against tightening US monetary policy. From a country allocation perspective, we believe credit differentiation from sovereigns with healthy external balance sheets will continue to be a major theme for emerging market assets. 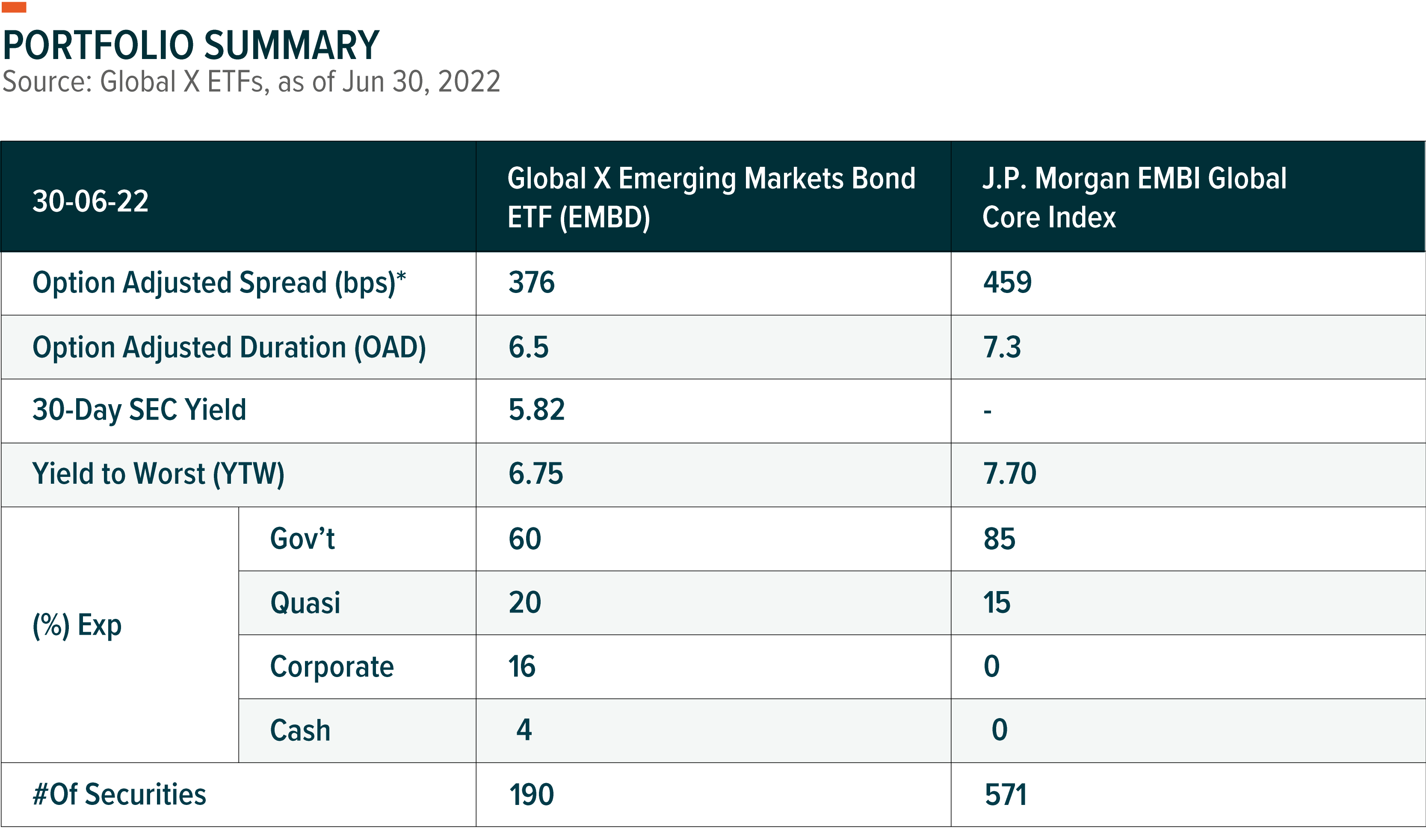 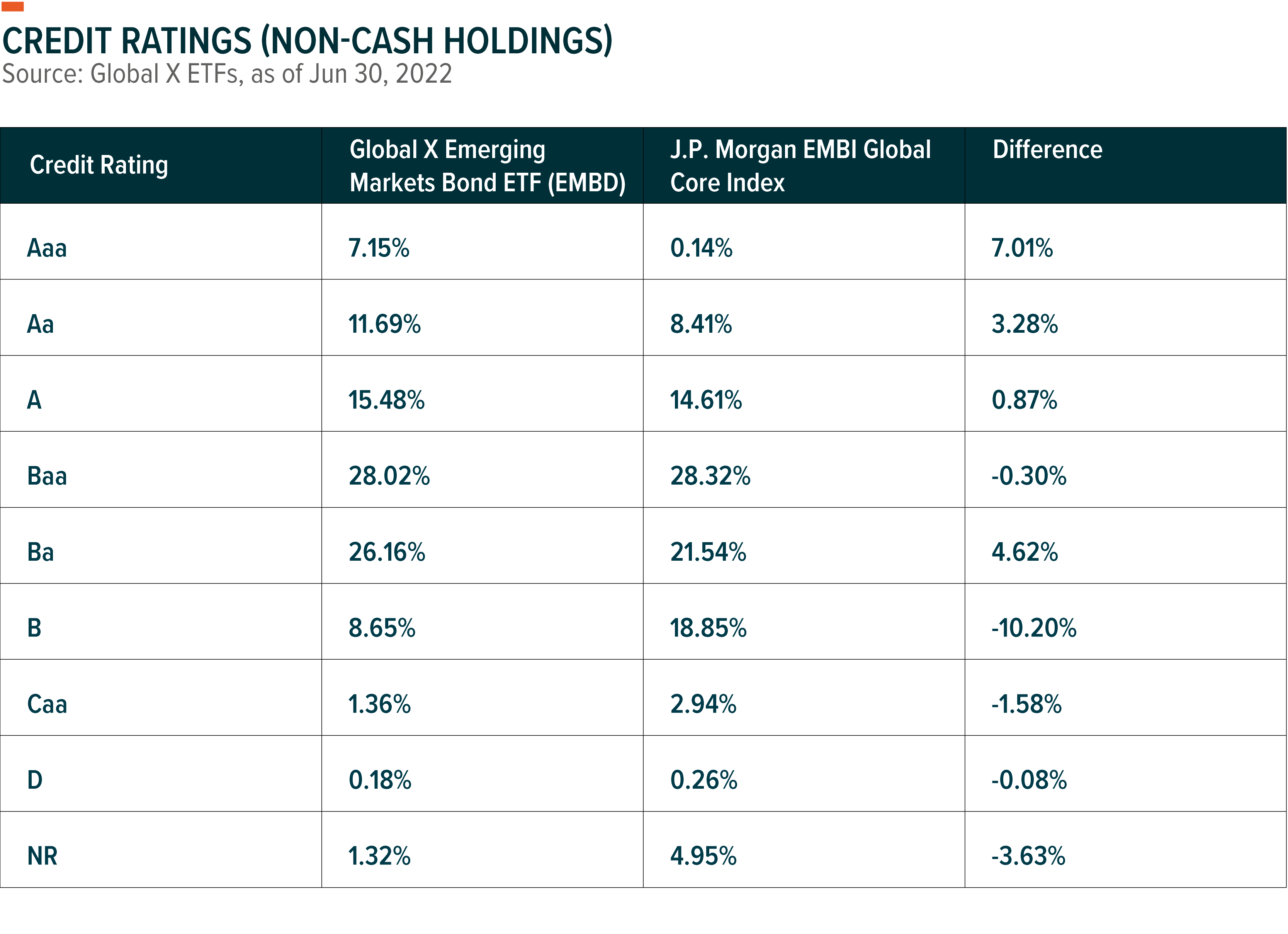 Credit Ratings noted are by Fitch, Moody’s, and Standard & Poor’s. Ratings are measured on a scale that generally ranges from Aaa (highest) to D (lowest). If more than one of these rating agencies rated the security, then an average of the ratings was taken to decide to security’s rating. 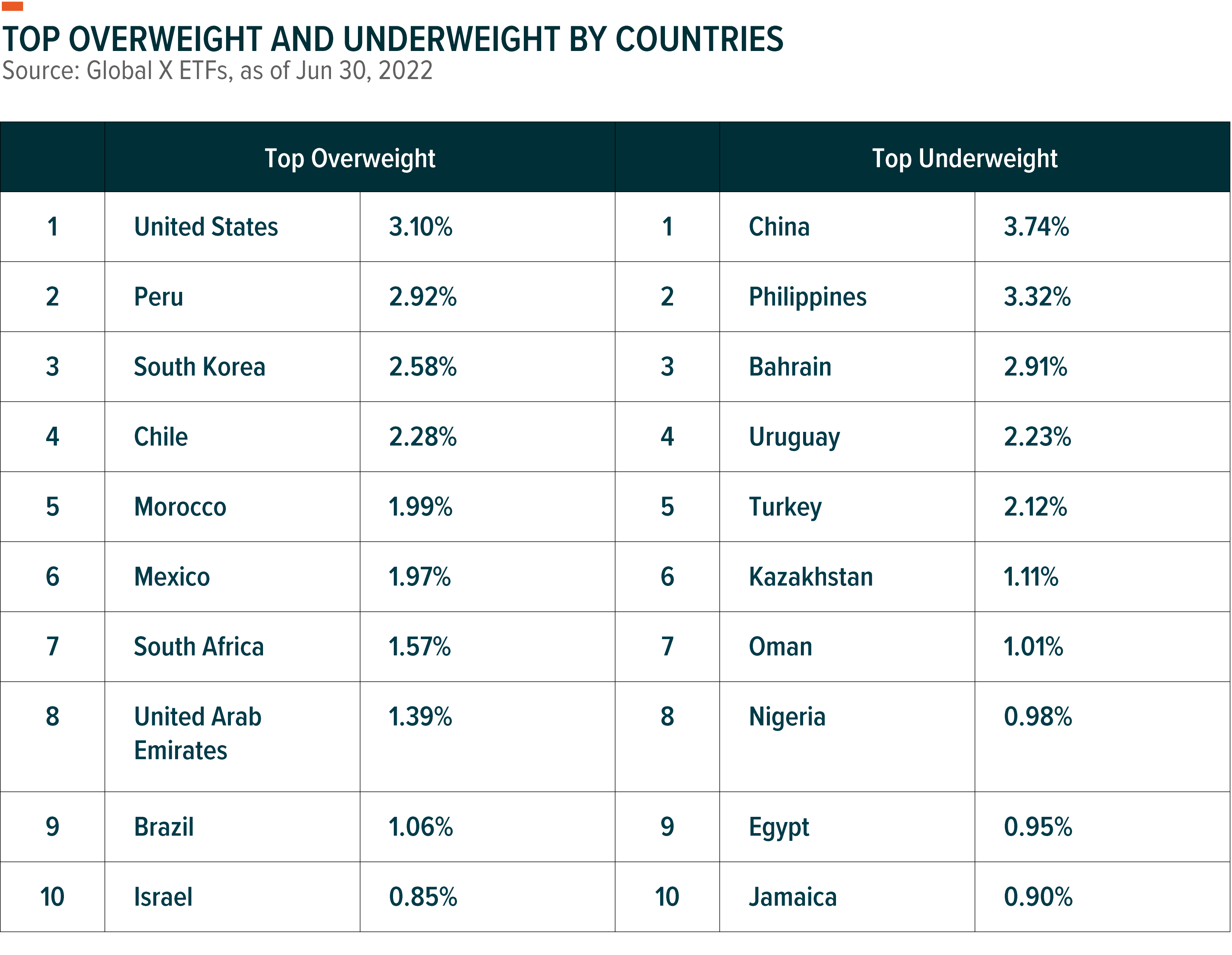 Beta: Beta is a quantitative measure of volatility, also known as systematic risk, of a security or securities versus the market as a whole.

Duration: Is a measure of the sensitivity of the price of a fixed-income investment to a change in interest rates. Duration is expressed in years.

Investing involves risk, including the possible loss of principal. International investments may involve risk of capital loss from unfavorable fluctuation in currency values, from differences in generally accepted accounting principles, or from economic or political instability in other nations. Emerging markets involve heightened risks related to the same factors as well as increased volatility and lower trading volume. High yield bonds involve greater risks of default or downgrade and are more volatile than investment grade securities, due to the speculative nature of their investments. EMBD is actively managed, which could increase its transaction costs (thereby lowering its performance) and could increase the amount of taxes you owe by generating short-term gains, which may be taxed at a higher rate. EMBD is non-diversified.

As an actively managed Fund, EMBD does not seek to replicate a specified index and is subject to increased credit and default risk, where there is an inability or unwillingness by the issuer of a fixed income security to meet its financial obligations, debt extension risk, where an issuer may exercise its right to pay principal on an obligation later than expected, as well as interest rate/maturity risk, where the value of the Fund’s fixed income assets will decline because of rising interest rates.

EMBD may invest in securities denominated in foreign currencies. Because the Fund’s NAV is determined in U.S. dollars, the EMBD’s NAV could decline if currencies of the underlying securities depreciate against the U.S. dollar or if there are delays or limits on repatriation of such currencies. Currency exchange rates can be very volatile and can change quickly and unpredictably.

EMBD’s benchmark index is the JPMorgan EMBI Global Core Index, which is a broad, diverse U.S. dollar denominated emerging markets debt benchmark that tracks the total return of actively traded debt instruments in emerging market countries. Indices are unmanaged and do not include the effect of fees, expenses or sales charges. One cannot invest directly in an index.

Shares of ETFs are bought and sold at market price (not NAV) and are not individually redeemed from the Fund. Brokerage commissions will reduce returns. The market price returns are based on the official closing price of an ETF share or, if the official closing price isn’t available, the midpoint between the national best bid and national best offer (“NBBO”) as of the time the ETF calculates current NAV per share, and do not represent the returns you would receive if you traded shares at other times. NAVs are calculated using prices as of 4:00 PM Eastern Time.