Brazil’s stock exchange closed at an all-time high shortly following the results of the country’s presidential elections, which delivered a victory to Jair Bolsonaro. With exceptional recent performance, investors are looking to understand what the markets see in Bolsonaro’s victory and how he may impact Brazil’s economy in the years ahead.

Bolsonaro won the Brazilian elections on a platform of nationalism and derisive rhetoric which has been likened to Donald Trump or Rodrigo Duterte of the Philippines. Despite his tenure as a politician, he earned ‘outsider status’ for his unique approach and steadfast support for the military – which remains a controversial institution given its history tied to the dictatorship that only ended in 1985. His posture on economic and financial policy, though not entirely clear, seemed to favor privatization of state owned enterprises and lower taxes. This was interpreted as market-friendly, made clear by the equity rally around his election.

The Need for Reforms in Brazil

Brazil’s elections came at a pivotal time for the country, with many reforms needed in short order to stabilize its fiscal situation and improve its economy. Off the bat, new laws are needed to allow the country to adhere to the expenditure limits established by a 2016 Constitutional Amendment. If unaddressed, the country’s current 85% debt-to-GDP level is expected to increase to nearly 96% in 2023. To avoid this, Brazil needs to address the root of spending concerns: an unsustainable pension system, which in 2015 absorbed more than 11% of GDP, suppressing productivity and growth.1 Further, law and order remains an important issue with rapidly increasing crime rates as well as political instability from a spate of corruption charges involving former politicians.

Bolsonaro’s PSL party gained the second-most seats in both houses, behind the Workers Party (PT). Certain key agenda items, however, like pension reform, will require two-thirds congressional support to pass. Achieving cooperation across parties is complicated by Bolsonaro’s campaign messages to end corruption and pork barrel politics, as well as his efforts to consolidate governmental ministries. His potential and announced cabinet members may give clues to his administration’s positions of certain issues. These cabinet members include:

Consumption: Consumer interest rates are set by Brazil’s “Big 4” banks, which control 84% of total loans and charge prohibitively high interest rates, hindering spending and growth.2 Recent developments in fintech reflect an interest in reforming this area by investors and the Central Bank alike, as fintech’s growth  could more broadly help reduce fees and increase market efficiency. Bolsonaro’s economic advisor, Paulo Guedes, notably advocates for the privatization of Brazil’s “crown jewel” SOEs, including Banco do Brasil, one of the “Big 4,” which could accelerate competitive forces in Brazil’s credit markets.

Investment: Brazil is a top 25 foreign direct investment (FDI) recipient, with $64 billion in annual inflows in 2017, of which a significant portion came from China. As Brazil’s second largest trading partner and a major source of FDI, Bolsonaro’s hostile rhetoric towards China is of course a lingering source of concern. 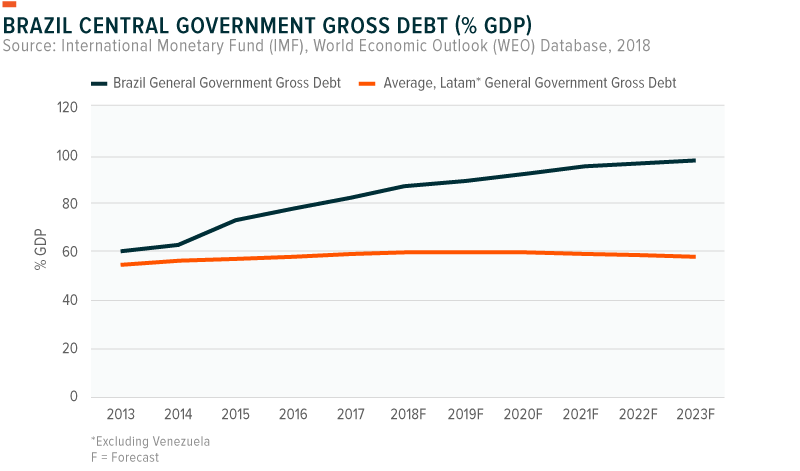 Trade: Exports will be key to improving Brazil’s economic prospects. Over the past year, Brazilian exports benefitted from a depreciated Real and increased price of soybeans, iron ore, raw sugar, and crude petroleum, which represent nearly 30% of its total exports. Yet trade in Brazil has been stifled by poor infrastructure and politics. For example, price controls levied on fuel consumption imposed earlier this year sparked trucker strikes that blocked port access. Although the truckers broadly supported Bolsonaro, the strikes highlighted Brazil’s economic sensitivity to social and labor issues.

Bolsonaro’s proposals to sign new trade agreements and reduce import quotas and non-tariff barriers would be positive, but has sent mixed signals on trade. He could potentially capitalize on the momentum shaping Brazil’s ongoing negotiations, alongside Mercosur, to establish free trade agreements with the EU and Canada. This includes recent initiatives by Argentina’s President Mauricio Macri, who is persistently committed to market liberalization through trade and monetary policy and has received several votes of investor confidence since taking office in 2015.

This momentum also comes amidst a potential transfer and consolidation of trade negotiating power into the hands of the finance ministry, and the G20 meeting held in Buenos Aires, at which President Trump has demonstrated an express desire to meet with Bolsonaro, and where it is expected the two will discuss a potential bilateral free trade agreement.3 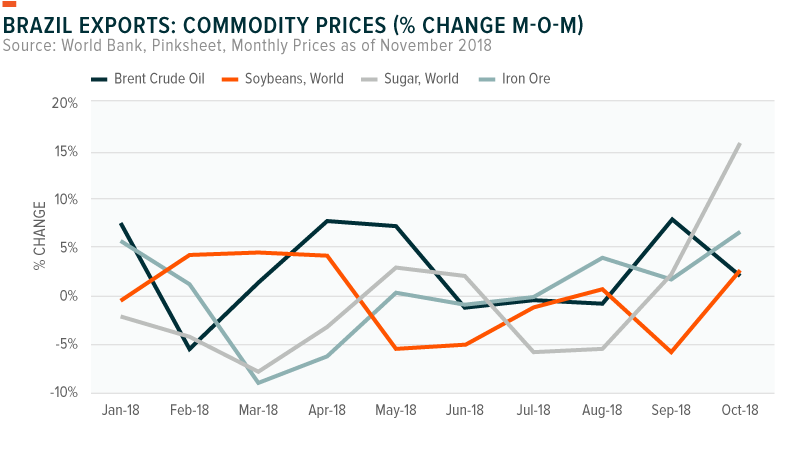 Bolsonaro’s election shakes up the political landscape in Brazil. On one hand, he may be the necessary disruption Brazil needs to pass tough reforms, tackle corruption, and recover economically. On the other hand, uncertain policies, divisive rhetoric, and a fractured political system heighten the risks associated with empowering an alternative politician. Ultimately, Bolsonaro’s success will be predicated on his ability to build political coalitions to tackle aggressive reforms and implement pragmatic reforms to improve productivity and growth prospects.

Investing involves risk, including the possible loss of principal. International investments may involve risk of capital loss from unfavorable fluctuation in currency values, from differences in generally accepted accounting principles, or from economic or political instability in other nations. Emerging markets involve heightened risks related to the same factors as well as increased volatility and lower trading volume. High yielding stocks are often speculative, high-risk investments. These companies can be paying out more than they can support and may reduce their dividends or stop paying dividends at any time, which could have a material adverse effect on the stock price of these companies and the Fund’s performance. SDEM is non-diversified.