Over the past few decades, many corporations in advanced economies took advantage of low trade barriers and globally integrated supply chains to outsource manual tasks to workers in countries with lower labor costs. But recently, exogenous risks such as trade conflicts, geopolitical tensions and, now, the COVID-19 crisis have companies rethinking their supply chain strategies. Reshoring manufacturing to their home countries and diversifying supply chains are now priorities as firms look to maintain greater control and avoid costly interruptions. While some may expect these efforts to increase labor costs, we believe companies will rely heavily on the latest robotics and automaton technologies to help control expenses.

Today, the world trades approximately $20 trillion worth of physical merchandise.2 Emerging economies represent almost half of that volume, totaling $8.2 trillion in exports, as much of these goods are assembled in emerging markets and consumed by richer countries.3 Since China entered the World Trade Organization (WTO) in 2001, the US lost over 4 million manufacturing jobs.4

Yet we may be on the cusp of a paradigm shift as companies realize the unintended consequences of offshoring. The US-China trade conflict raised alarm bells about the fragility of global supply chains. Brexit and the United States-Mexico-Canada Agreement (USMCA) further damaged confidence in international trade agreements. And in addition to these policy-driven concerns, the COVID-19 crisis and its impact on Chinese factories highlighted the risks associated with concentrating manufacturing efforts within specific geographies.

Simply put, companies must prioritize supply chain integrity over the cost savings associated with offshoring. While utilizing low cost labor overseas may improve profit margins, if a supply chain breaks down due to a changing geopolitical landscape, health risks, or other black swan events, there is no profit margin – because there are no products to sell.

In the wake of the COVID-19 crisis, companies are becoming increasingly aware of this truism. Approximately one month after the COVID-19 arose in Wuhan, roughly 31% of factories remained shut down in China and 32% had people working from home.5 Given that many factories implement just-in-time manufacturing, restarting production after an extended shutdown can take weeks for the supply chain to fully come back to life. Major corporations have warned that the extended supply chain disruption could result in lost sales. Apple, for example, recently announced that they do not expect to meet the revenue guidance provided for the March quarter given supply-side disruptions.6 Auto companies around the world also halted some of their production as a result of shortages of parts supply from China. Nissan, Fiat Chrysler, Hyundai, Honda, and a few others among the group of car manufacturers that have announced supply disruptions.

Labor costs in developed economies are undoubtedly much higher than in emerging economies. While manufacturing wages in China average CNY 72,000 per year, which equates to about $10,000, the US average of $46,000 is more than four times higher.7 Such dramatic cost differences historically accelerated the trend of offshoring. But manufacturing locally has non-monetary advantages that ought to be considered as well, such as bringing operations closer to company management, research and development, and customers. Onshore manufacturing also operates within domestic regulatory regimes, which are more familiar to local firms and often more stable than international agreements.

As companies consider the tradeoffs between onshore and offshore manufacturing, robotics and artificial intelligence are likely to be the x-factors that tip the scales in favor of onshoring. Automation allows companies to offset some of the costs of reshoring by enlisting robots to complete certain tasks rather than human workers. Robots work tirelessly across shifts and can complete certain tasks faster and more accurately than humans, while not requiring raises or benefits.

Some studies show that robotics adoption is correlated with declines in offshoring. In developed economies, a 10% increase in robotics applications results in -0.54% growth in offshoring.8 In South Korea, the Ministry of Small to Mid-size Enterprise (SME) and Startups, recently announced that efforts will be center towards reshoring manufacturing aided by smart factories.9  In the US, the Reshoring Institute published its 2019 annual survey results, showing that more than half of executives reported that they were planning or considering reshoring activities in the next five years.10 The survey also found that over 80% of respondents are looking into new software systems. And 70% are considering investing in robotics.11

Lower costs are a major factor. Despite an estimated cost of $250,000 for a sophisticated industrial robotic arm, a company can potentially reach a breakeven point with traditional labor costs in less than two years.12 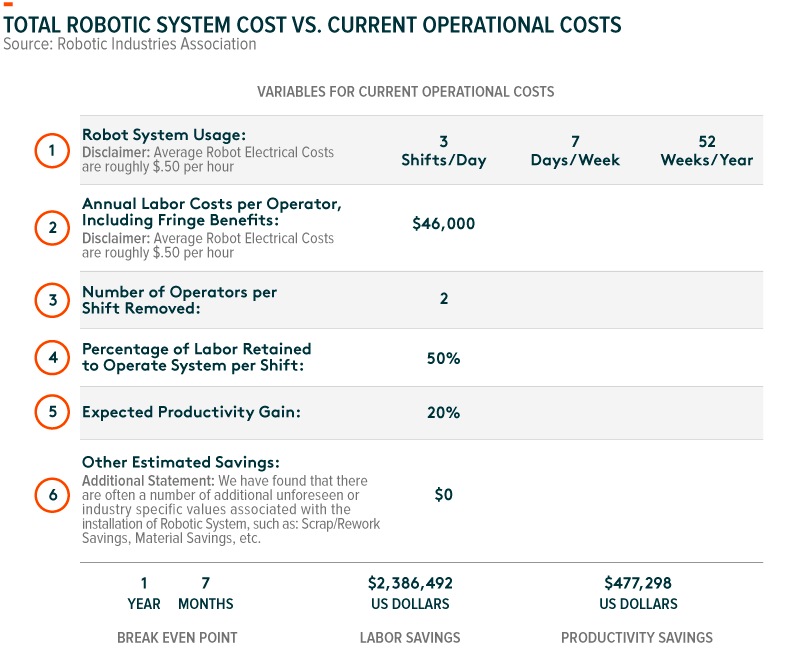 Over time, this economics are likely to only become more attractive as the cost of robotics falls and labor costs continue to rise. Over the last 30 years, the average robot price has fallen by more than 50% in real terms while labor costs have increased over 100%.13 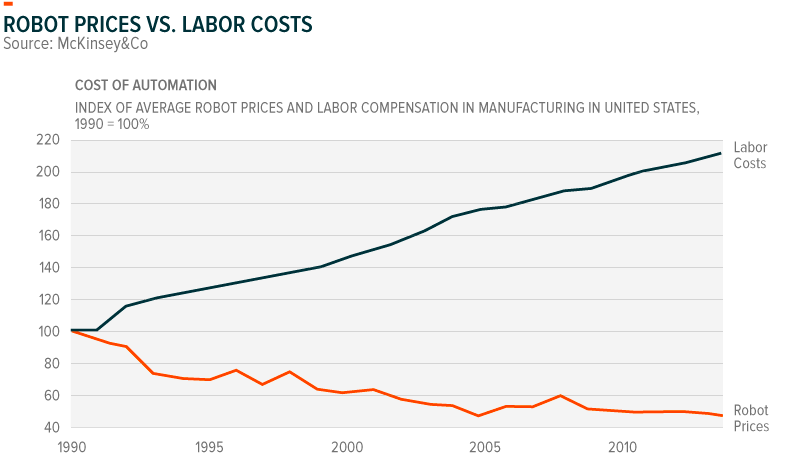 Falling costs, however, are just one reason for the increasing adoption of robotics. Another consideration is ease of acquisition of robots. New manufacturing technologies, the proliferation of data and computing power, and customer preferences for on-demand manufacturing are driving significant changes in the way goods are produced. Companies can now look to robotics-as-a-service (RaaS) subscriptions to scale robotics into their manufacturing processes, leasing units to reduce upfront costs and entry barriers to technological acquisition.

Finally, improving robotics and AI technologies are further driving adoption. Robot dexterity continues to improve due to advanced 3D vision capabilities and end-of-arm tooling. They can now carry pods of inventory alongside humans in warehouses and nimbly pick and place fragile items. A robot can carry out these tasks with little to no downtime, or even use network-connected sensors to predict and avoid failures ahead of time.

As a result of these trends, industrial robot sales continue to grow. From 2013 to 2019, sales grew at a compound annual growth rate (CAGR) of 15%, reaching approximately 420,000 installments in 2019.14  The International Federation of Robotics estimates that annual installations will increase to 584,000 by 2022.xvi This estimate could prove to be on the lower side if reshoring efforts accelerate in this new global paradigm.

Robot density, which measures the number of robots per 10,000 workers, shows the potential for robotics adoption to grow over the longer run. Currently, there are just 99 industrial robots per 10,000 manufacturing jobs around the world, implying a robot density of about 1%.15 But robot density for manufacturing hubs like Singapore and South Korea stands 8 times higher at 8.3% and 7.7%, respectively, and continues to rise.16 Large countries like the US, Germany, and China remain much lower than these levels, but could converge over time as robotics adoption accelerates.

We expect the multi-decade trend of offshoring to reverse as companies become increasingly concerned about supply chain integrity. Disruptive macro events like trade conflicts and global health emergencies bring uncertainty to companies’ operational capabilities and supply chains. As robotics and automation becomes more capable, cheaper, and easier to implement, it is likely to accelerate reshoring even further as firms realize the benefits of localized manufacturing outweigh the risks of producing goods abroad.

4. US Bureau of Labor Statistics, “Employment, Hours, and Earnings from the Current Employment Statistics survey (National),” accessed on Mar 3, 2020.

7. Trading Economics, “Wages in Manufacturing,” accessed on Feb 25, 2020. Note: All numbers are approximates.

8. OECD, “Industrial robotics and the global organisation of production,” Feb 27, 2018.

Investing involves risk, including the possible loss of principal. The investable universe of companies in which BOTZ may invest may be limited. The Funds invest in securities of companies engaged in Information Technology, which can be affected by rapid product obsolescence and intense industry competition. International investments may involve risk of capital loss from unfavorable fluctuation in currency values, from differences in generally accepted accounting principles or from social, economic or political instability in other nations. BOTZ is non-diversified.