On 12 August 2022, the House passed the landmark Inflation Reduction Act (IRA), a reconciliation package that represents the United States government’s largest-ever investment in combatting climate change.1 This legislation, which President Biden is expected to soon sign into law, represents a dramatic development in the country’s chances of meeting critical climate goals. It directs nearly $370 billion toward bolstering U.S. climate change mitigation and adaptation, increasing energy security, and lowering energy costs. In this piece, we discuss the bill’s key measures and why we believe they have the potential to create compelling investment opportunities across climate-related industries.

The Inflation Reduction Act contains tax and non-tax measures aimed at accelerating the U.S.’ climate change mitigation and adaptation efforts, boosting domestic clean energy manufacturing, increasing energy security, and lowering energy costs.3,4 With these measures, economy-wide emissions are forecast to decline 37% to 41% below 2005 levels by 2030.5 Without it, U.S. emissions were forecast to fall well short of the goal, declining just 24% by 2030.6

Among the bill’s most significant measures that can help shift the U.S. economy green, we highlight the following.

The robust wind and solar power growth in the U.S. over the past 15 years is an example of how tax credits can help the energy transition. According to the Solar Energy Industry Association, the solar industry has grown more than 10,000% since the solar ITC’s implementation in 2006.19

A study from Princeton University concluded that the Inflation Reduction Act could boost annual utility-scale solar capacity additions from 10 gigawatts (GW) in 2020 to an average of 49GW per year by the middle of the decade. Wind power capacity additions could increase from 15GW in 2020 to 39GW per year over the same time frame.20 Enhanced growth over the next decade could equate to total investments in wind and solar power nearly doubling from $177 billion under current policies to $321 billion.21 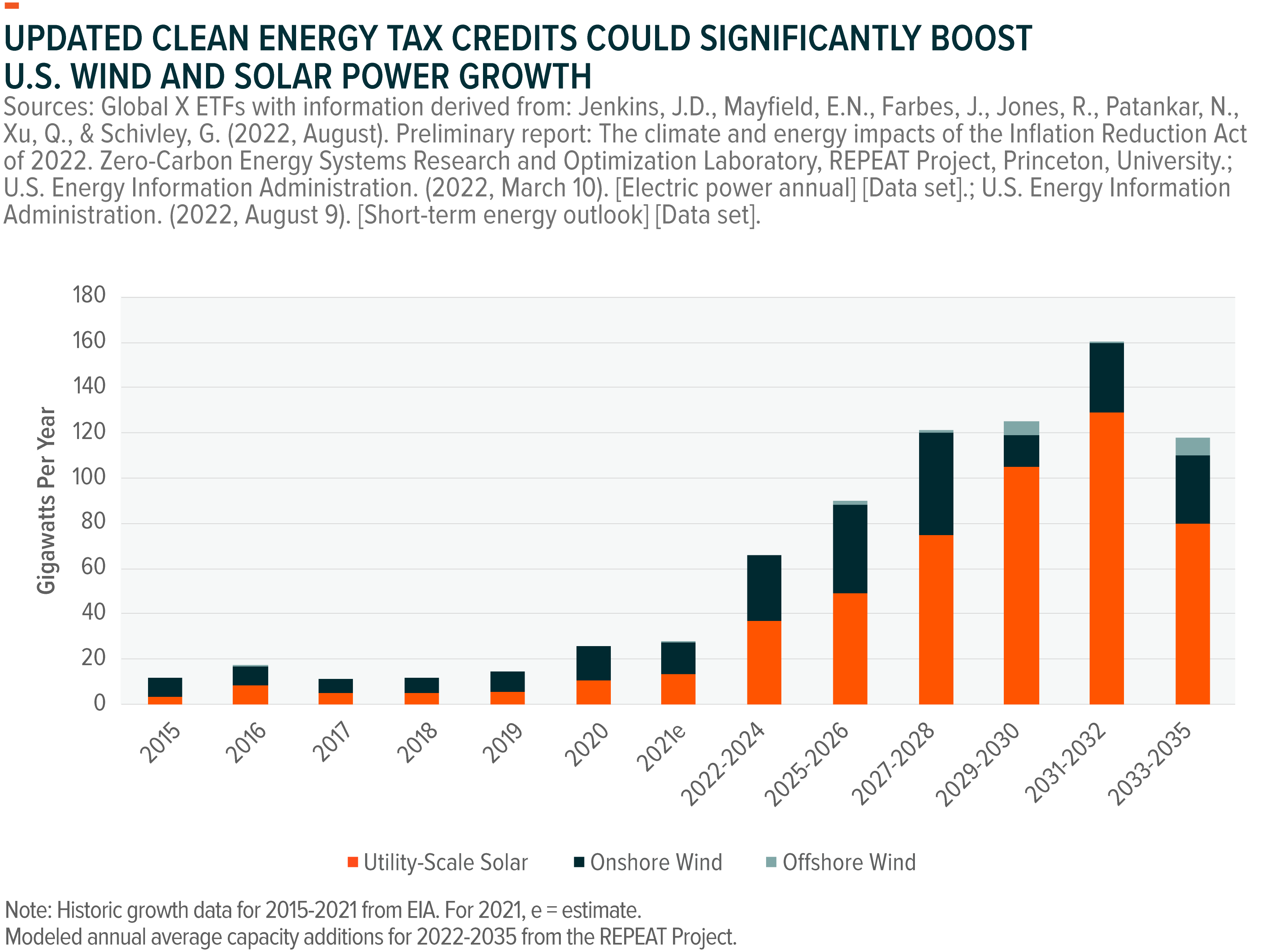 For hydrogen, the tax credits may help accelerate the development of the nascent low-carbon hydrogen industry in the U.S. Low-carbon hydrogen is a key potential pathway for reducing emissions in hard-to-decarbonize segments such as refining processes, fertilizer production, and long-haul and heavy industry transport. Potential low-carbon hydrogen approaches include green hydrogen, which is produced with electrolyzers powered by renewable energy, and blue hydrogen, which is produced using natural gas that is paired with carbon capture and storage systems. Importantly, the credits may make sustainably sourced green and blue hydrogen cost-competitive with grey hydrogen, which is derived from carbon-intensive processes and accounts for nearly the entire current supply. The cost of producing grey hydrogen ranges from about $1 to $2/kg, while blue hydrogen costs $1.5 to $2.5/kg and green hydrogen $3 to $8/kg.22 In addition, the potential growth and cost benefits within the renewables sector could also yield benefits across the hydrogen value chain, given that renewable energy plays a central role in green hydrogen production.

For the EV space, the IRA’s impact may be more limited in the near term. Income and materials sourcing requirements mean that few of the EV models currently available in the U.S. are eligible for the new tax credits that begin in 2023.23 Longer-term, the bill wants to encourage the development of the domestic EV battery supply chain and shift dependence away from China. A key stipulation in the bill requires at least 40% of the critical materials contained within EV batteries to be sourced from the U.S. or its designated trading partners.24

In our view, this policy supports further development of supply chains, which could prove healthy for the U.S. economy as well as the overall EV space. Additionally, the income requirements, purchase price limitations, and tax credits on used cars may make EVs more accessible for a wider range of U.S. consumers and accelerate adoption.

By one estimate, the Inflation Reduction Act could drive $3.5 trillion in cumulative investment in climate change-related activities over its 10-year lifespan.25 Critically, we believe that this robust investment has the potential to fundamentally shift the U.S. economy green with important emissions deadlines fast approaching. Poised to benefit from this shift are renewable energy developers and producers; manufacturers of wind, solar, battery, and energy storage components; companies throughout the entire hydrogen and electric vehicle value chains; energy efficiency and green building companies; and miners of critical minerals such as lithium. By any measure, the U.S. government passed a historic climate action that we expect to reverberate across sectors and create compelling investment opportunities over the short and long terms.

GRNR: The Global X Green Building ETF invests in companies positioned to benefit from increasing demand for buildings that either positively impact the natural environment or reduce/eliminate negative impacts. This includes companies involved in green building development and management, as well as the technologies used to increase energy efficiency in residential, commercial and public buildings.

Investing involves risk, including the possible loss of principal. The investable universe of companies in which The Funds may invest may be limited. Narrowly focused investments and investments in smaller companies may be subject to higher volatility.

The companies in which the Funds invest may be subject to rapid changes in technology, intense competition, rapid obsolescence of products and services, loss of intellectual property protections, evolving industry standards and frequent new product productions, and changes in business cycles and government regulation. CleanTech, solar and hydrogen companies may be significantly affected by fluctuations in energy prices and in the supply and demand of renewable energy, tax incentives, subsidies and other governmental regulations and policies.

Real estate and REITs are subject to changes in economic conditions, credit risk and interest rate fluctuations. Social responsibility investment criteria limit the types of securities that can be included, which could cause GRNR to underperform other funds that do not have a social responsibility focus.

There are additional risks associated with investing in base and precious metals as well as their respective mining industries.

Wind energy companies may be highly dependent upon government subsidies, contracts with government entities, and the successful development of new and proprietary technologies. Seasonal weather conditions, fluctuations in the supply of and demand for energy products, changes in energy prices, and international political events may cause fluctuations in the performance of such companies.

The Funds are non-diversified. Shares of ETFs are bought and sold at market price (not NAV) and are not individually redeemed from the Fund. Brokerage commissions will reduce returns.