The economy is likely to weaken in 2023 as the Fed raises rates with market turbulence potentially persisting to start the year, but some of the doom and gloom might be overplayed.1 Two prevalent narratives have arisen: economic regime change and recession. Regime change involves a structural shift in areas like interest rates, inflation, and trade, potentially shifting long-term asset class returns.2 The recession narrative calls for a cyclical downturn in economic activity driven by higher interest rates resulting in lower demand.3 While these narratives involve important changes taking place in the global economy, they should be put under a microscope. Concluding that the world is entering a new normal and altogether new investment regime seems premature, even if caution is warranted.

Not So New Economic Regime

Higher interest rates and inflation may be the new normal.4 Deglobalization and nearshoring production likely redefine aspects of commerce.5 Climate change costs are rising and the energy transition must accelerate.6 The rise of nationalist policies could precipitate greater conflict.7 These trends have drawn significant attention as part of the regime change narrative, but most have been materializing for years, might not justify upending longstanding investment paradigms, and could drive a new wave of innovation.

While U.S. interest rates are the highest since the 2008 financial crisis, and may well stay elevated for some time, financial assets can still generate strong returns.8 For example, from 1975 to 1983, the Nasdaq index returned 292% and the S&P 500 returned 80% with an average U.S. interest rate of 10.1% (see chart). Growth stocks also outperformed in the early 1990s with average fed funds rate rates above 4.5%.9 Market history going back to 1975 dispels the notion that the economy cannot handle higher rates or that growth equities need excessively low rates to deliver returns. 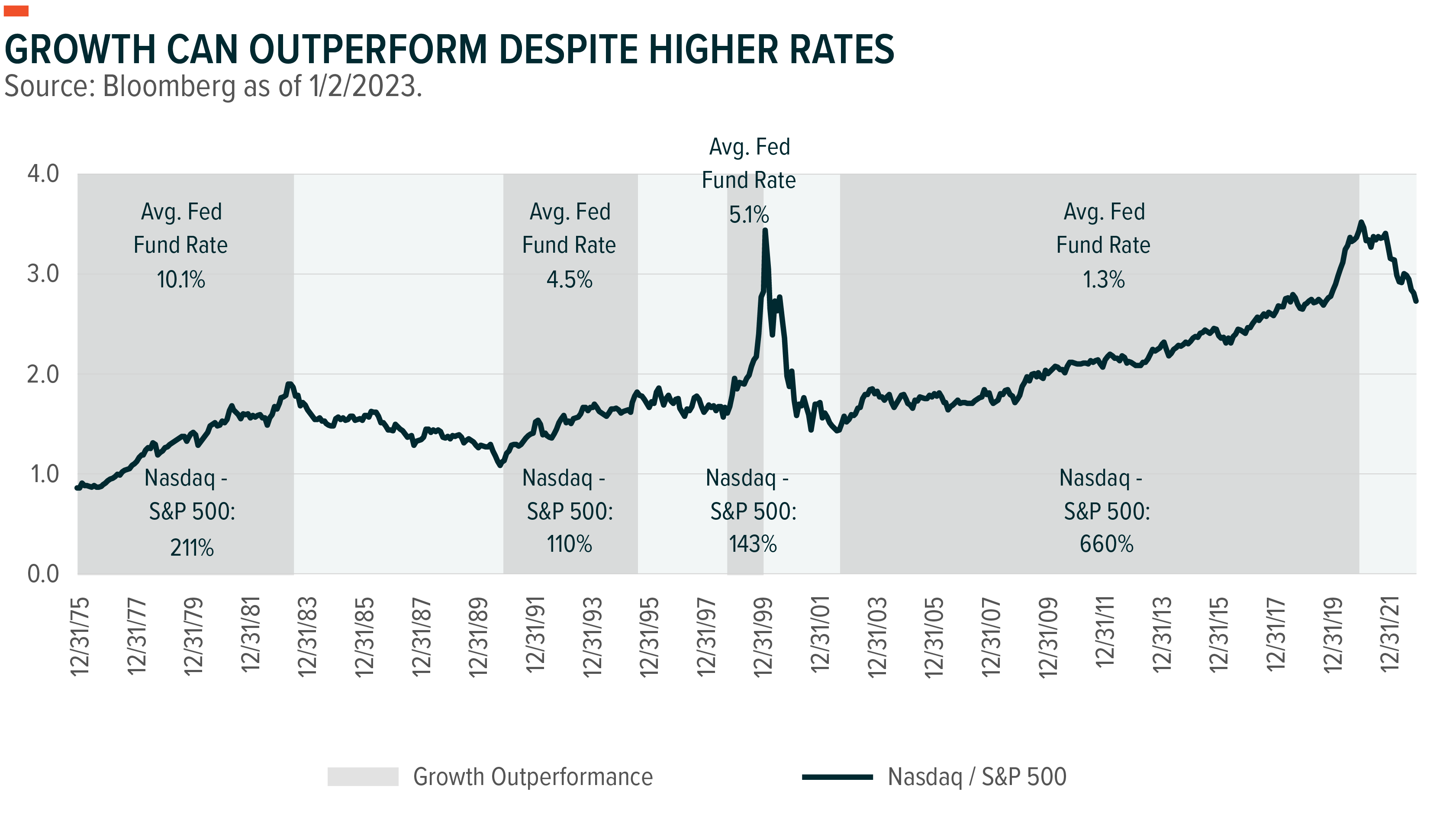 The CHIPS and Science Act, passed in August 2022, is an example of a measure intended to incentivize high tech and semiconductor manufacturing in the U.S.11 But context is key, as current trends in deglobalization are neither recent nor a COVID-driven outcome.

Globalization typically ebbs and flows over long periods of time. Global trade as a percent of GDP declined after the World War I and would not reach 1913 levels until the 1970s.12 From the 1970s to 2010, global trade grew rapidly. Over the past decade, global trade has been declining, and the current political climate may make gains such as those prior to 2010 less likely (see chart). 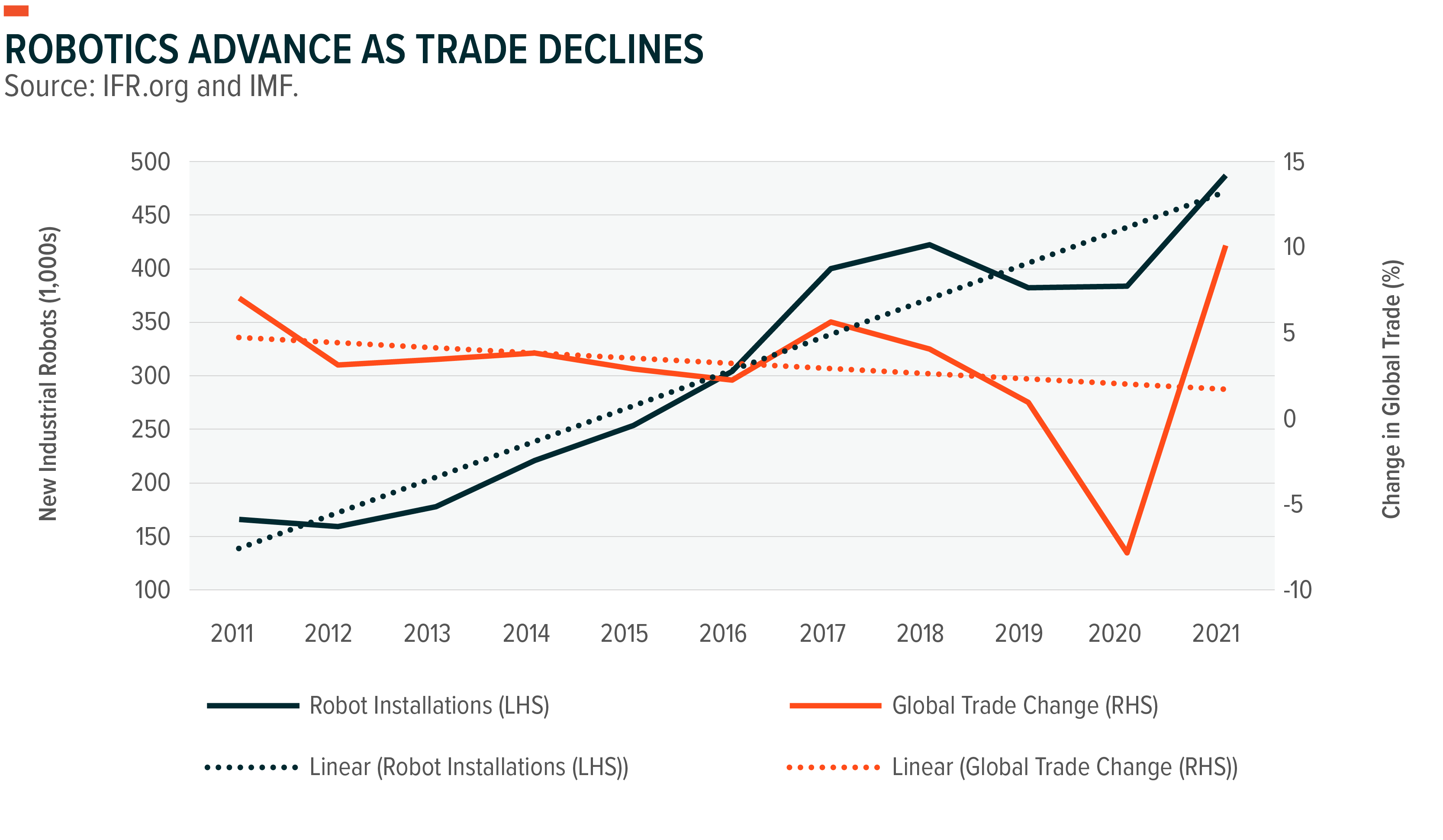 The end of U.S. unilateralism and deflationary peace, the return of great power rivalry, and a new Cold War are multi-decade transformations that have been underway for years.13 Should rivalries intensify amplifying geopolitical risk, competition in clean energy and cybersecurity may be reminiscent of the U.S.-Soviet space and arms races, which led to meaningful investment and advances in technology.14

The recent U.S. midterm election points to greater power for factions on the left and right of the political spectrum advocating for protectionism and isolationism just as China’s leadership takes a nationalist turn as well.15 That said, China’s rise on the international stage and U.S. political discord hardly come out of the blue following the U.S.’ move to limit technological sales to China and China-Russia relations deepening.16

Awareness of the practical costs of climate change increases with every storm that floods out communities and every heat wave that impacts electrical grids. Estimated costs from climate change vary widely but reach into the trillions over the next 50 to 100 years.17 Powering the global economy cleanly and efficiently will be a significant challenge with electricity expected to increase from 20% of energy use today to as much as 50% by 2050.18

Meeting future energy needs likely means drawing on a full range of clean tech such as solar, wind, hydrogen, nuclear, batteries, and electric vehicles.15 Incremental power needs will largely be generated through renewable technologies, and climate tech investment doubled from approximately $20 billion in 2020 and over $50 billion in 2021.16

Recession and the Three Ls: Labor, Leverage, and Liquidity

Predicting recessions is notoriously difficult. The annual outlook season offered a broad range of growth and asset price forecasts, including many predictions for a U.S. recession at some point in 2023.21 World Bank and International Monetary Fund (IMF) economists believe growth will slow in 2023, which is reasonable given the aggressive tightening and persistent inflation.22 That said, nominal growth and consumer spending surprised to the upside in 2022.23 One metric for assessing the health of the U.S. economy, nominal growth less 10-year rates, suggests that a recession could be avoided (see chart). 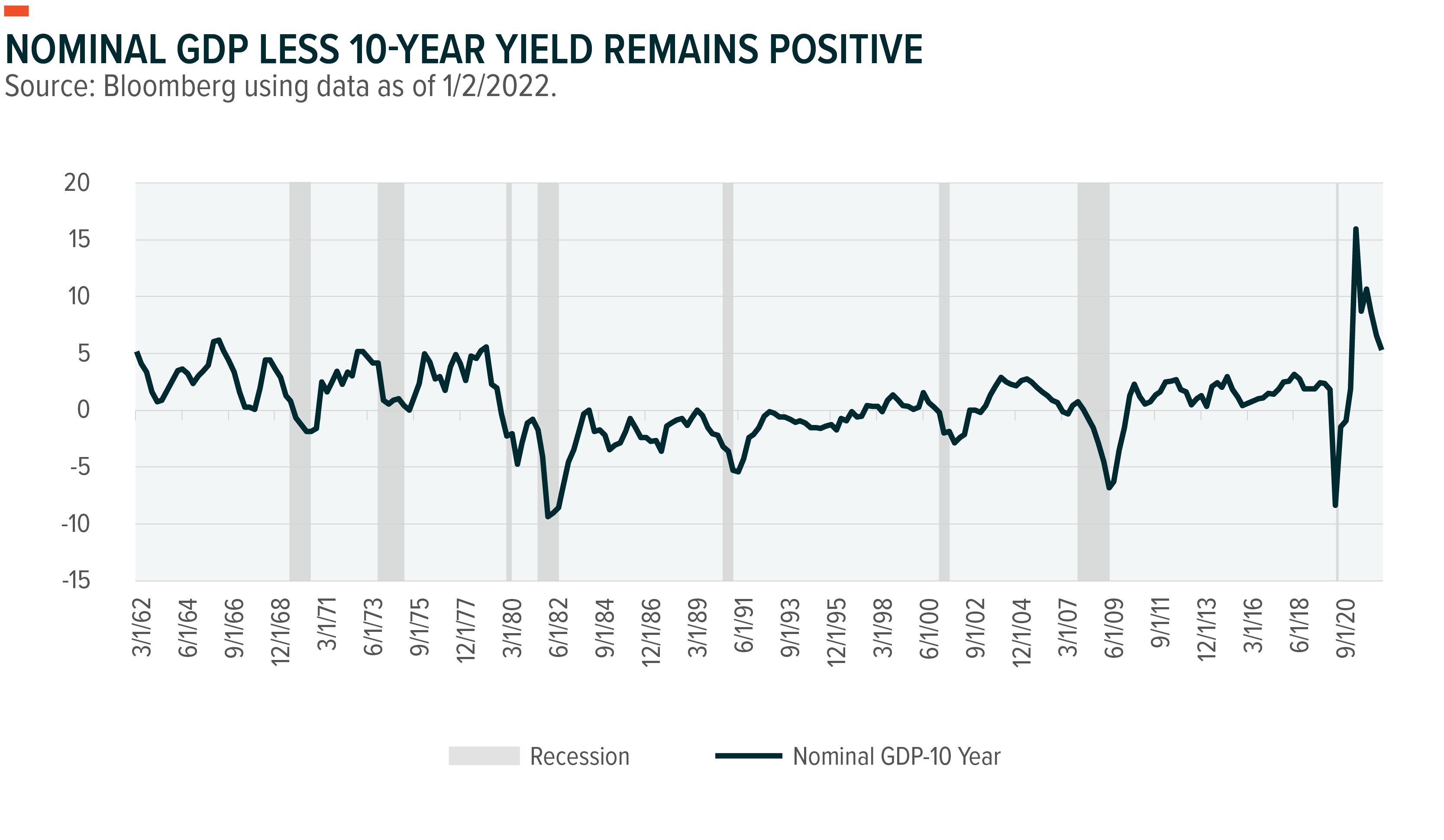 Recessions usually coincide with deep downshifts in labor, leverage, and liquidity. At present, a check on the three Ls offers a degree of reassurance relative to past recessions. 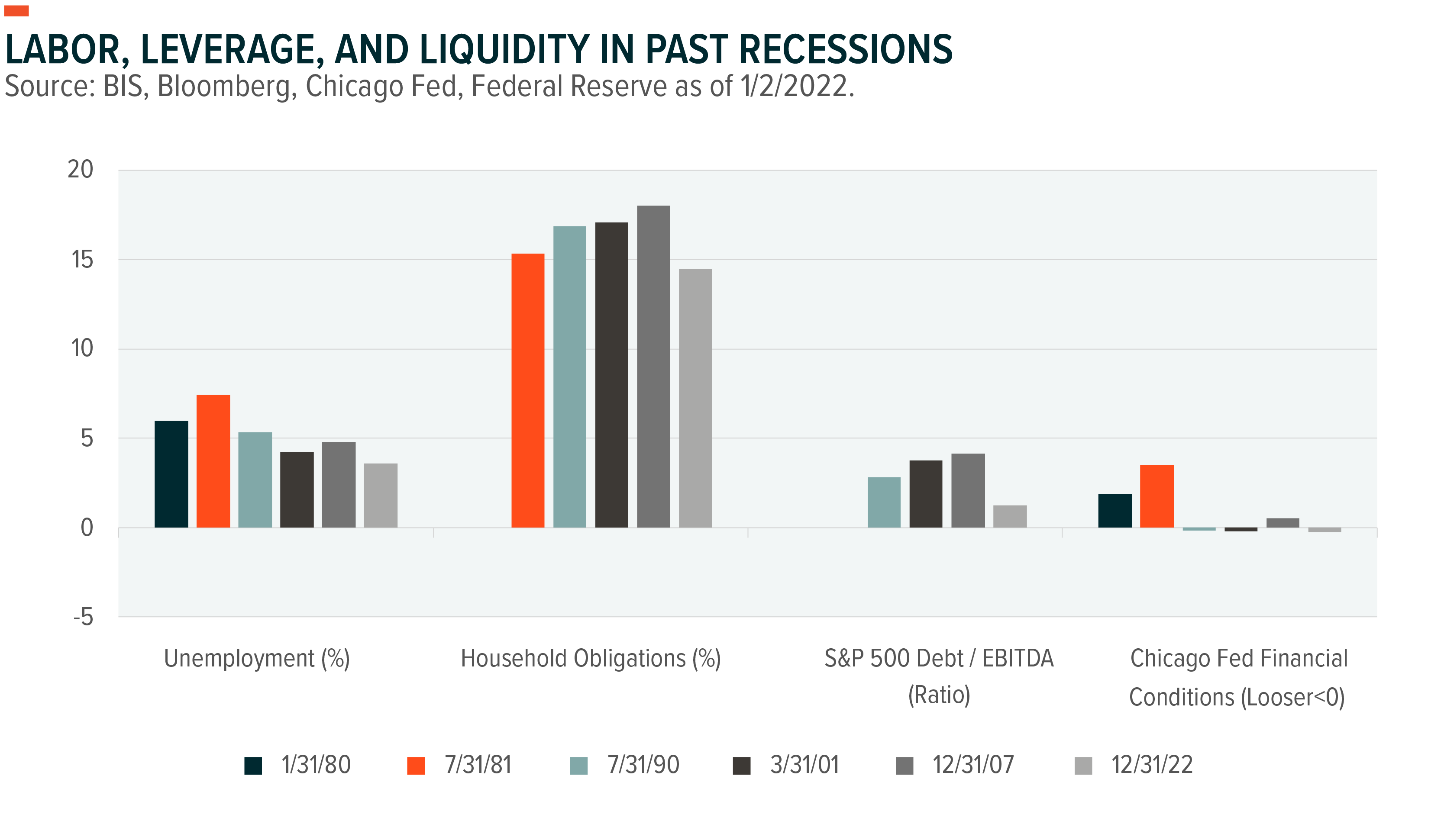 Labor conditions remained resilient in the U.S., and strong job markets usually mean that consumers will continue spending. The unemployment rate is at 3.6%, near an all-time low and the lowest level since the 1960s.24 That strength can diminish quickly if demand sours and companies look to control costs, but the persistent hiring challenges since the pandemic may make businesses more cautious and less likely to downsize.25 Labor and spending may remain more robust than prior cycles, even if unemployment does increase modestly, moving closer to normal long-term rates. 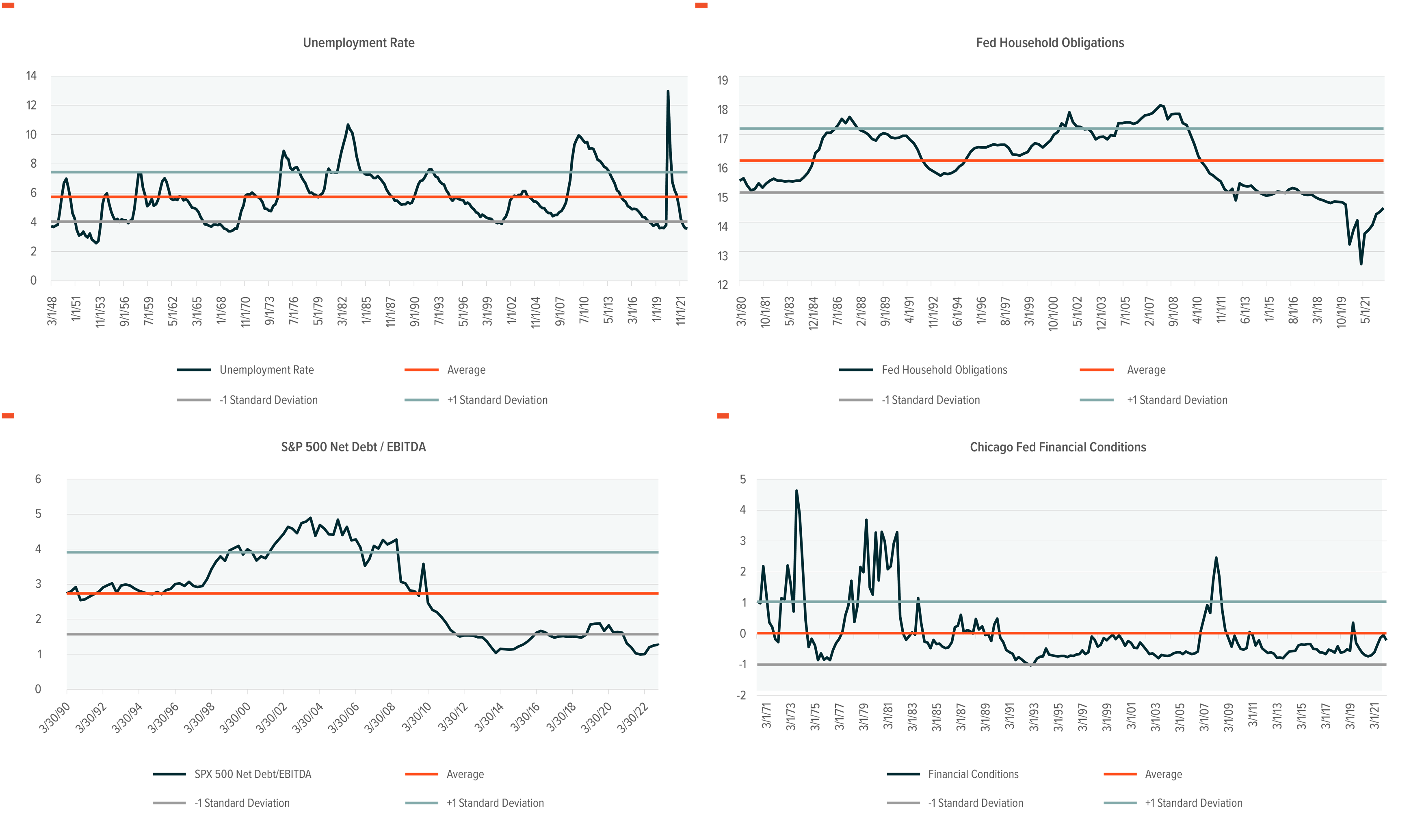 Leverage levels for households and companies are relatively healthy when compared to prior recessions. Financial obligations, which looks at debt payments as a percent of household income, is more than one standard deviation below average, as households used COVID stimulus to pay down debt and refinanced at lower rates.26 Companies have also been disciplined about financial management. Debt-to-EBITDA (earnings before interest, taxes, depreciation, and amortization) is significantly lower than prior recessions and one standard deviation below average.27 Real cash on balance sheets for S&P 500 companies is above 2019 levels, suggesting that large cap firms are well capitalized even if cash on hand is below the COVID peak.28

Tightening liquidity remains a risk, as the Federal Reserve and other central banks raise rates. That said, the Fed has not yet managed to achieve tightening financial conditions despite successive 75-basis point hikes (see chart).29 Government spending, wage gains, and reasonably resilient financial asset prices continue to stand in the way. COVID stimulus money has moved from households to companies and investors. Cash holdings in money market funds remained near the pandemic peak at $4.4 trillion as of September 2022.30 Eventually, cash could come off the sidelines, potentially bolstering asset prices and fostering looser financial conditions. As a result, the Fed may remain more aggressive than expected.

Labor, leverage, and liquidity are an important signpost for the overall health of the economy. Meaningful deterioration in one or more could herald a serious economic downturn, but these critical economic factors are strong as of January.

Investors that believe the U.S. economy is likely to avoid recession might consider themes such as millennial consumers, e-commerce, and video games that have sold off yet benefit from stronger discretionary spending. Conversely, themes that may hold up should the economy contract meaningfully include aging population tied to healthcare as well as U.S. infrastructure and renewable energy given government spending. 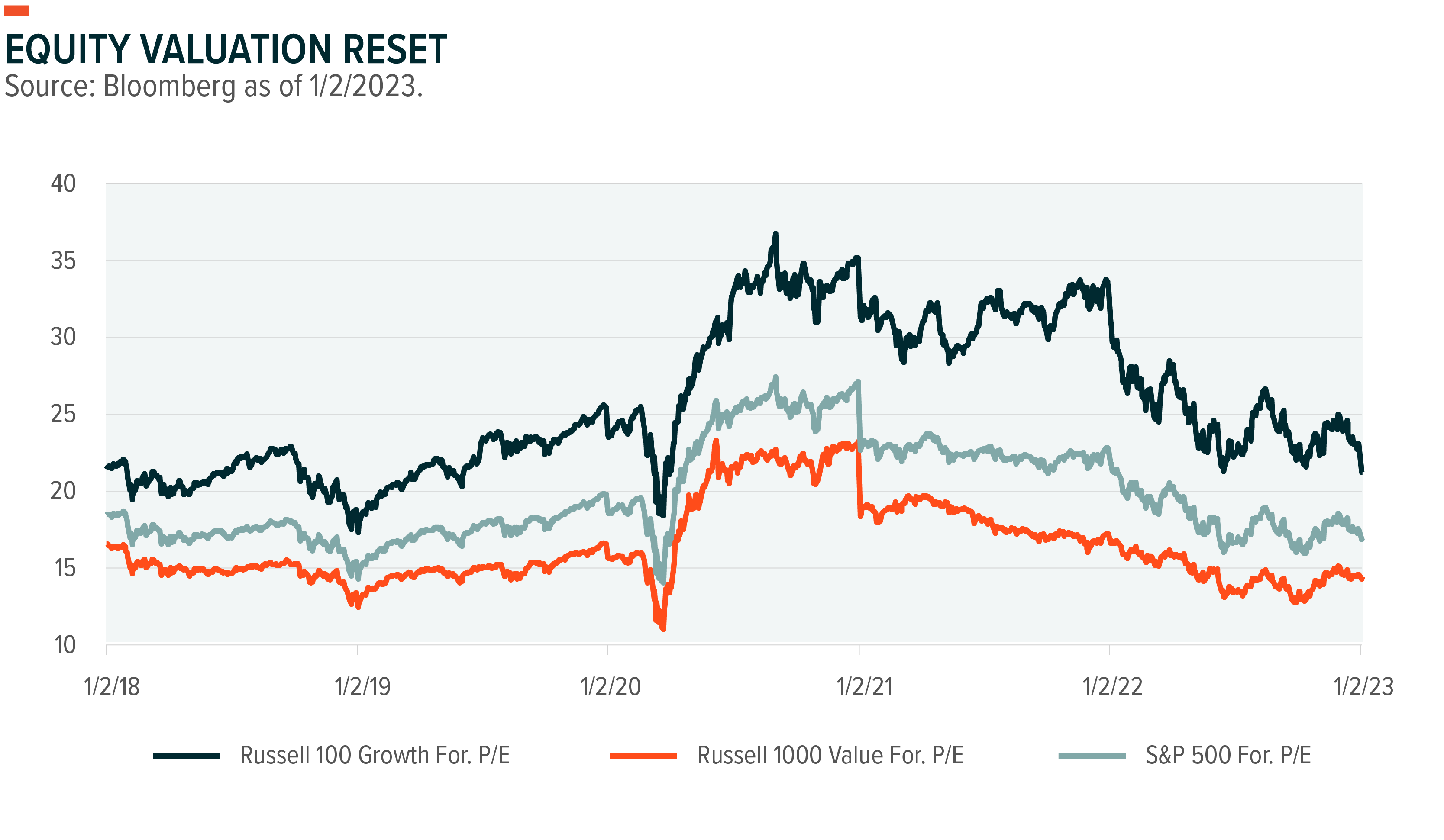 Given the multiple contractions that brought major index valuations back in line with 27-year averages, perhaps the biggest risk is downward earnings revisions. Should companies hold on to workers and continue to invest in innovation and productivity, earnings and margins expectations could come down.34 An unexpected slowing of producer prices, which has come through in recent data, could provide a positive offset.35

The bottom line for investors is that markets are forward looking, and we believe that valuations down to historical averages create pockets of opportunity. Whether companies manage through structural transformation or a cyclical slowdown, innovation remains a core competence and new technologies, from automation to clean energy, are likely drive the global economy forward. 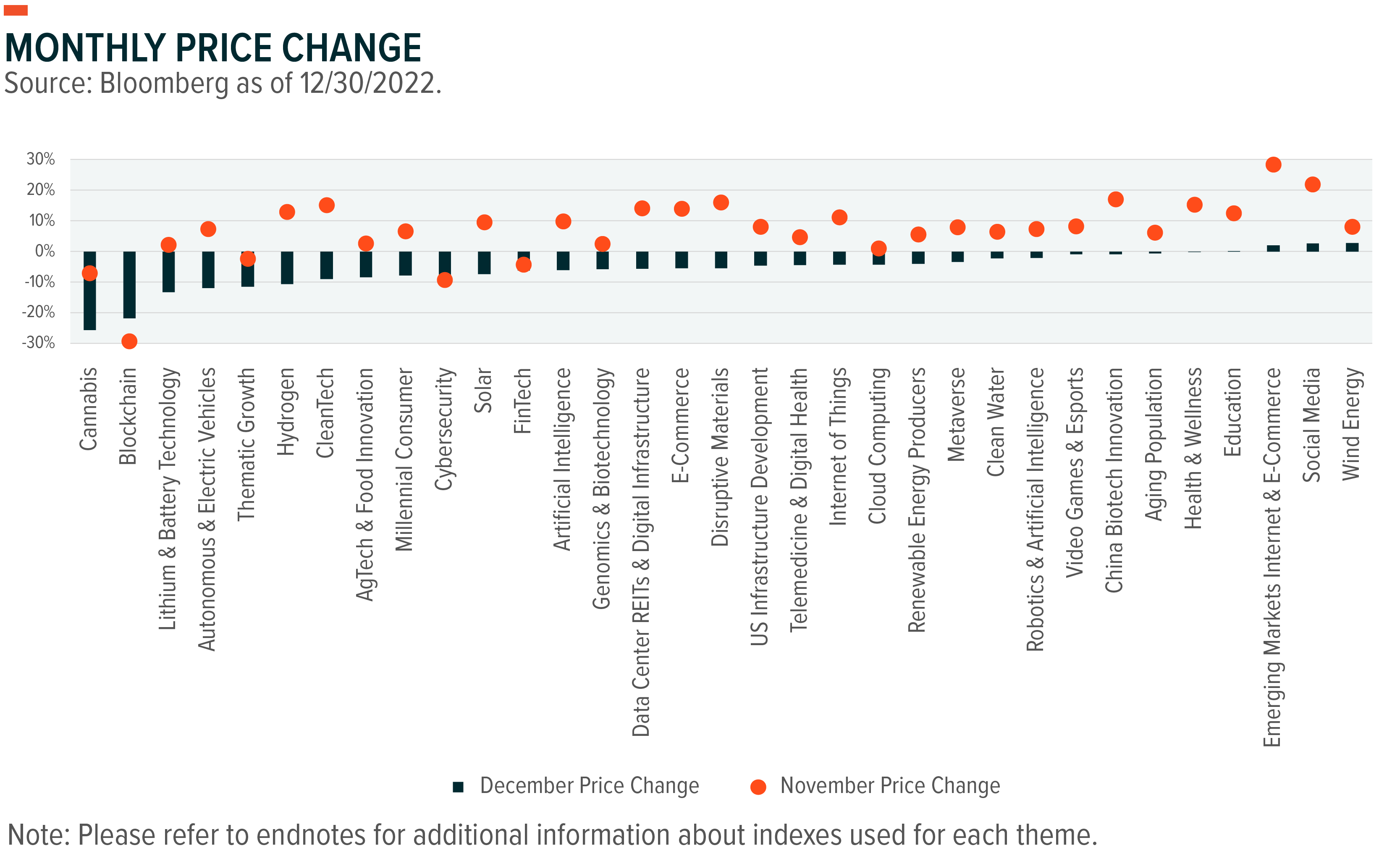 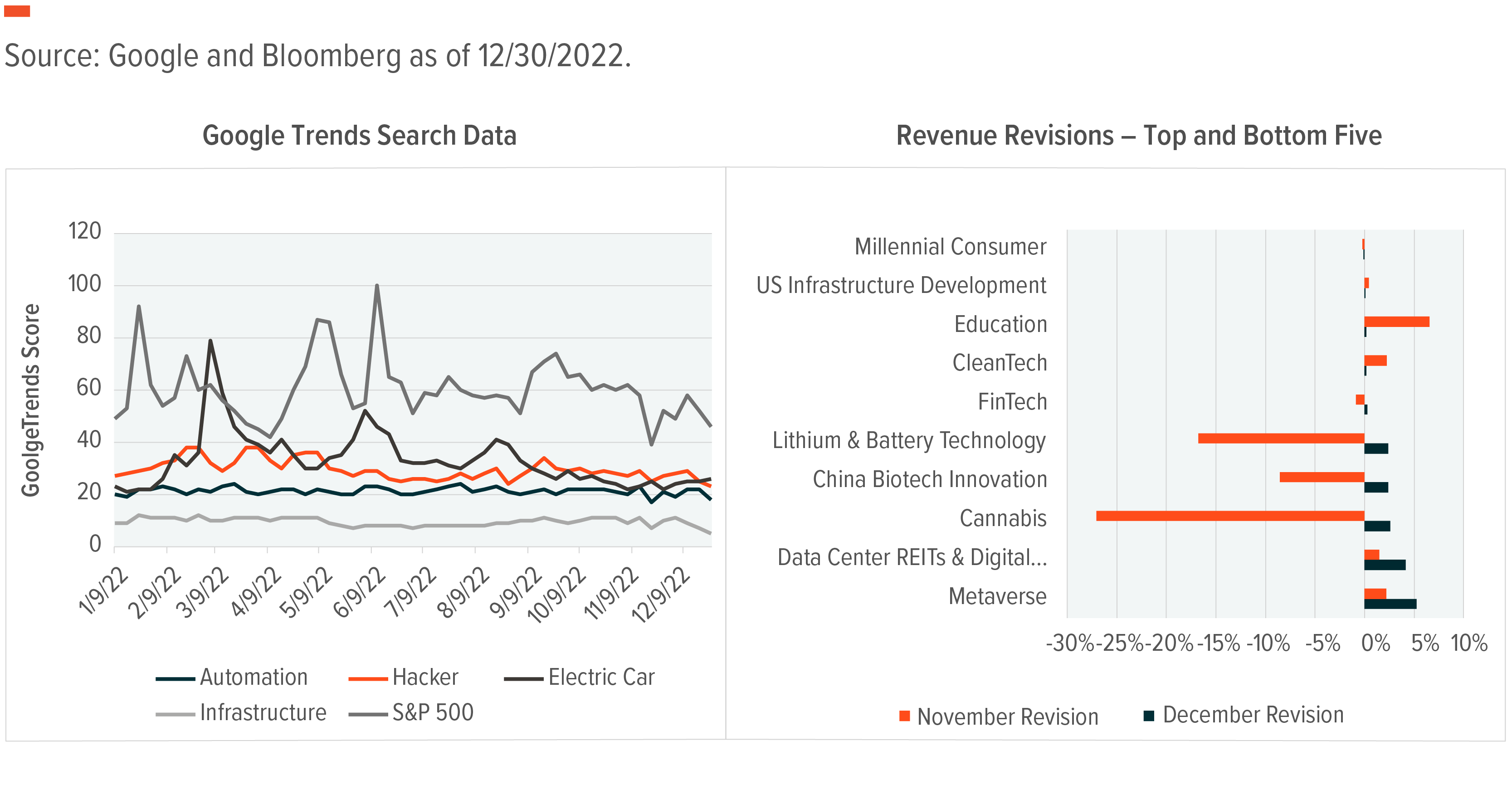 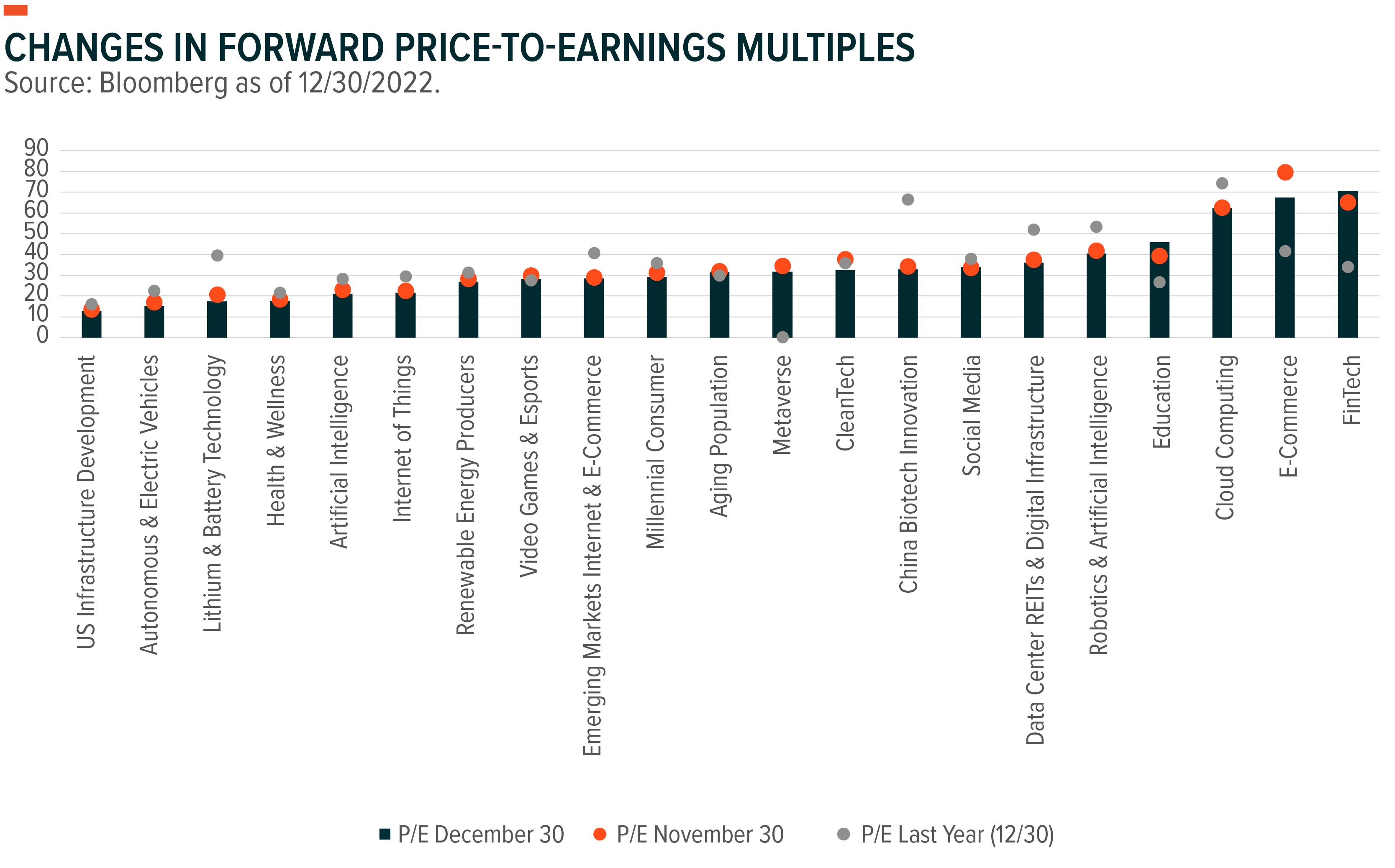 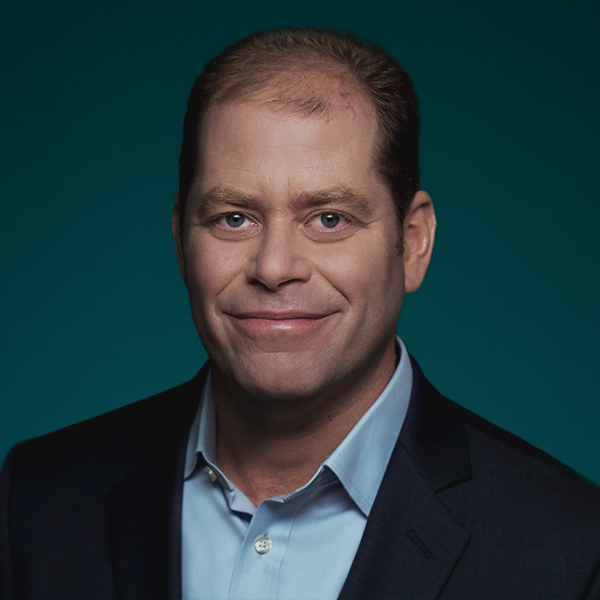