Too Much, Too Soon, and Just a Little Too Late: Stimulus a Driver of Market Noise

Investors have a lot to digest these days trying to navigate recession fears, interest rate hikes, inflation, consumer strength, and corporate earnings. Lurking underneath those headlines as a root cause of the current volatility in market and economic data may be the massive government stimulus from the pandemic. In our view, the extraordinary fiscal and monetary responses may have overly manipulated the current business cycle, compounding uncertainty. Against this noisy backdrop, investors may want to look beyond short-term market volatility and focus on long-term trends.

Historic Stimulus May Be Causing This Atypical Business Cycle

Markets whipsawed alongside interest rate expectations for the September Fed meeting. The oscillation between a 50-basis point (bp) and 75 bp hike coincided with major shifts in equity values. During August, the average daily change in the S&P 500 market cap was $332 billion, double the average of the last decade.1 Since June 2022, the S&P 500 moved over $1 trillion on 8% of trading days compared to just 1% in the decade prior.2 Still, expectations for S&P 500 earnings remained remarkably stable between $220 to $230 per share, with the 12-month forecast moving down just $1.90 to $226.18.3

Massive amounts of government stimulus moving through the system since 2020 may be an important part of the story. The US allocated $4.5 trillion of fiscal spending in response to Covid-19, and then followed with another $1 trillion for infrastructure.7 The Fed added $4.8 trillion in monetary stimulus ballooning the balance sheet.8 In sum, the $10.3 trillion of pandemic-induced government support was almost 50% of the entire US economy in 2021.9 On top that, Congress passed the CHIPS Act and the Inflation Reduction Act in August 2022 at a total of almost $650 billion.10

We view the onshoring and climate bills as valuable to the US economy, but stimulus at this juncture runs contrary to the Fed’s efforts to tighten liquidity and tamp down inflation. The stimulus dynamic is a critical challenge for investors, and not typical. For example, businesses ordinarily reduce workforce size in an economic contraction, but during the pandemic, government actively incentivized businesses to keep workers on staff. In the recovery, the economy has not been given a chance to adjust organically.

Investors May Want to Look Long-Term for Greater Clarity

Conflicting reports on the health of the economy have markets unsure whether to focus more on the Fed’s hawkishness or the continued resilience of corporate earnings. From this uncertainty, certain questions arise. For example, should a 25 bp shift in short-term rates really move the S&P 500 $1 trillion? Will 25 bp really matter to large cap firms 5 or 10 years from now? Equity values are typically more correlated with long-term rates, which have been relatively stable in recent months (Exhibit 1).11 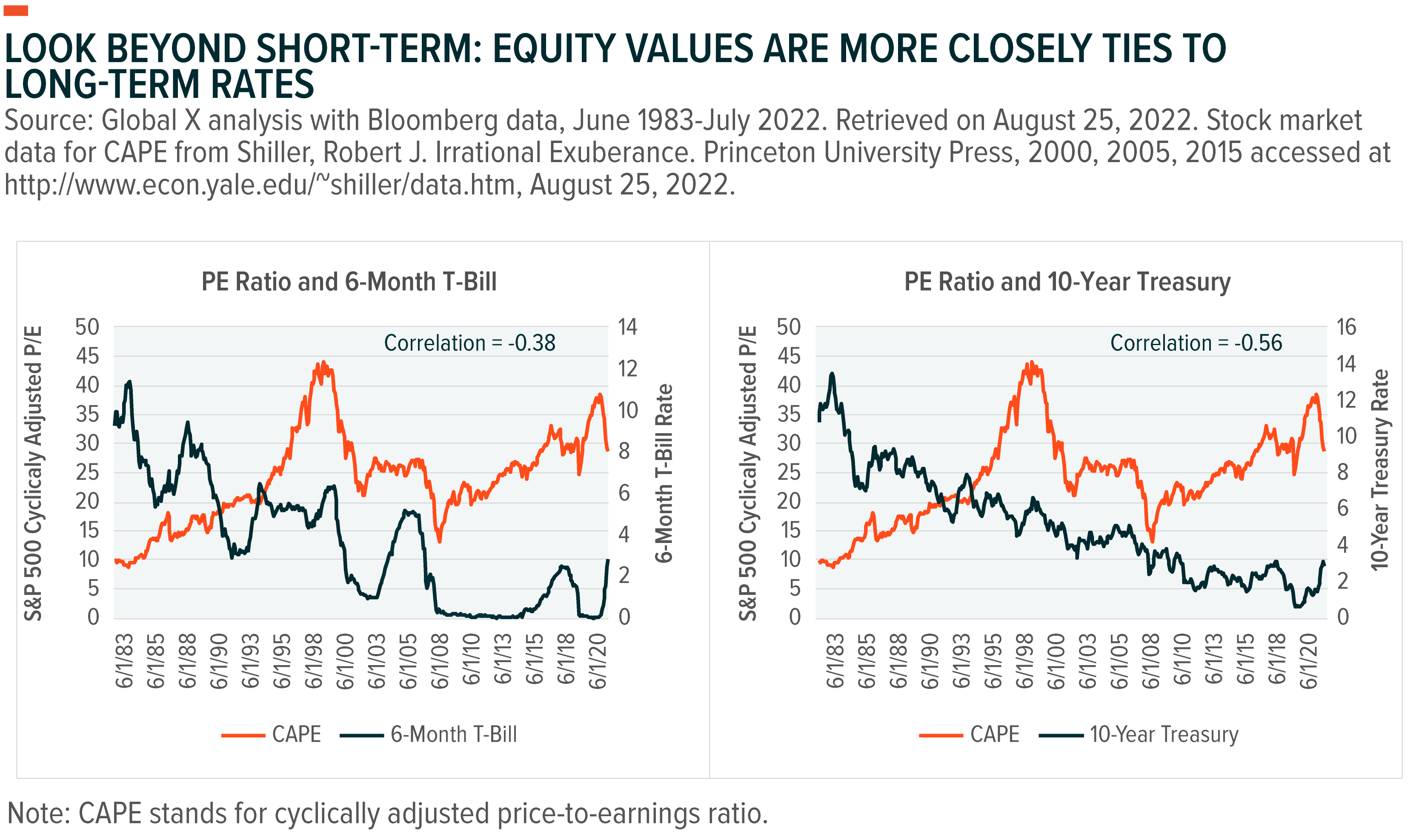 In that sense, investors may want to focus more on longer-term trends and risks. One significant risk that we believe markets may be underestimating is the deterioration in US-China relations. While the relationship suffered a setback with tariff escalation in 2017 and 2018, a series of recent events suggest further challenges ahead.12 The US had congressional delegations visit Taiwan, passed an onshoring bill, and took steps to limit high-end semiconductor sales to China. Meanwhile, China has the twice-a-decade National Party Congress in October, and Beijing may look to send a clear message about trade relations.

Trends Investors May Want to Consider

Almost every major car company announced initiatives to make EVs a major part of their product mix over the past two years, and governments are spending to support the effort.13,14 One of the major challenges will be expanding battery production, as EV batteries require a range of materials, with lithium being central.15 Lithium takes years to mine and bring to market in usable form, so the massive surge in EVs could mean strong demand and pricing power for those companies mining lithium and turning the material into batteries.

Like other areas of the software-as-service business, cybersecurity firms have fallen out of favor after a run-up during the pandemic.16 That said, companies in the S&P 500 continued to increase capital expenditure and R&D spending despite the economic slowdown, and senior executives see cybersecurity as one of the areas they must invest in amid digital transformation.17 Recently, high-profile hacks of Uber and the town of Brookhaven put cybersecurity back in the news.

US-China issues could create opportunities in robotics and automation on both sides of the Pacific. Should the US prove successful in onshoring some semiconductor and technology manufacturing, robotics likely proves important because the US needs to develop advanced factories capable of manufacturing products like GPUs.18 China potentially faces the challenge of creating a consumer-led economy to replace the US market while managing an aging population with fewer working age people.19  Automation technologies may help support increased consumer demand by improving productivity of a smaller labor force relative to the overall population. 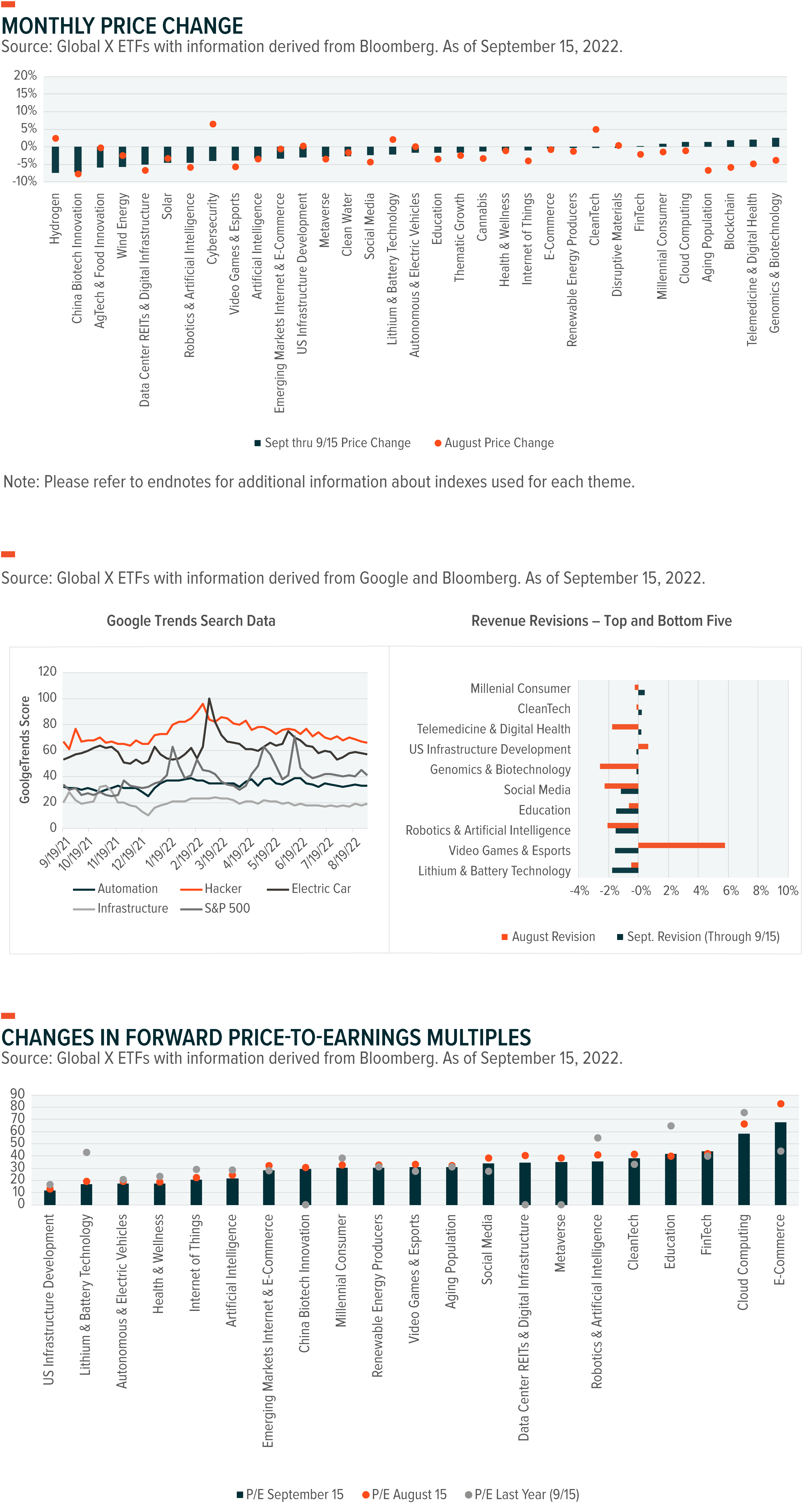