The $550 billion in new spending that the Infrastructure Investment and Jobs Act (IIJA) directs toward traditional and next-generation infrastructure represents one of the most prodigious infrastructure investments in U.S. history.1 In the first year since passage in November 2021, dispersal of federal grants to the state level was on schedule, with investments translating into progress on projects and even contract wins for engineering and construction firms. Although IIJA funding is already having an impact, many firms contend that the projects announced in 2022 are only a fraction of what is to come. In looking to 2023, we believe that the IIJA’s continued rollout, combined with other recent legislation, may provide more substantial tailwinds across the U.S. infrastructure value chain.

States Welcome Billions of Dollars and Thousands of Planned Projects

According to White House data, the three states receiving the greatest share of the $185 billion of announced IIJA funding thus far, California, Texas, and Florida, account for as many as 1,400 projects.3 It is important to note that the project tally provided by the White House does not represent projects that are prepared to begin construction, often referred to as “shovel ready” projects. Most identified projects remain in their planning stages, with several logistical steps remaining before building or renovation can begin. Regardless, these projects are likely to indicate where IIJA-funded construction could eventually occur. 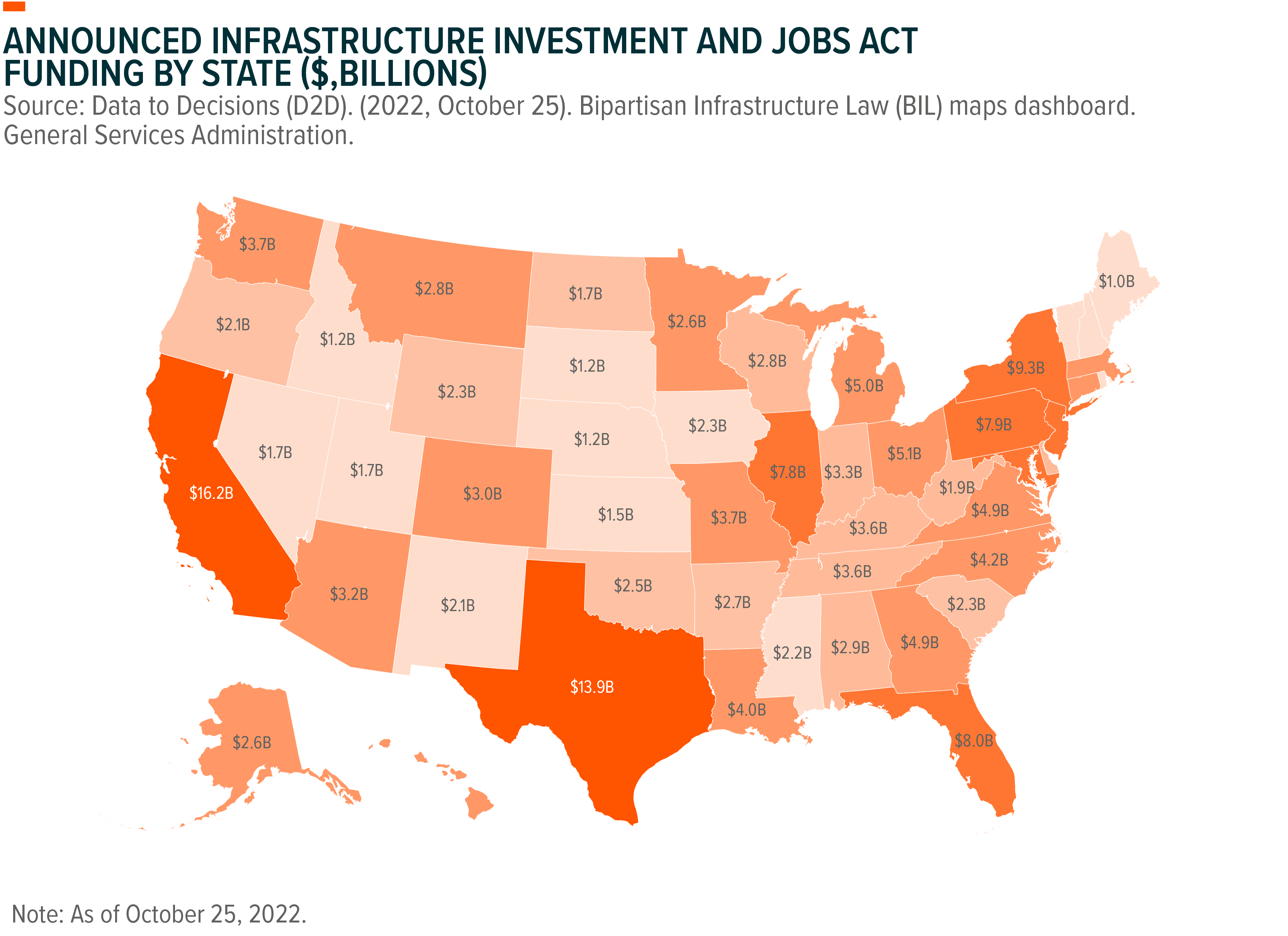 IIJA funds flowed quickly to established programs or those dictated by formula. Formula grants are automatically distributed to the state level by statute, making them easier to implement than discretionary funding, which is awarded through a competitive process.

An example is the $2.89 billion made available for airport improvement projects for fiscal years 2022 and 2023.4 Funding made its way to these projects because it was delivered through the preexisting Airport Improvement Grant program, which the Federal Aviation Administration oversees. The formula grant is one of the reasons why over 30% of the projects identified by the White House thus far are airport development initiatives.5 Similarly, an outsized portion of the resources available are for road and bridge projects because 97% of the funds announced so far for these initiatives are distributed via formula grants.6

Ultimately, we expect the currently announced funding and projects to represent a small subset of the benefits that the IIJA could unlock. Over the next several years of IIJA implementation, a larger share of funding could target areas such as passenger and freight rail, grid improvement, digital infrastructure, resiliency, and clean water. 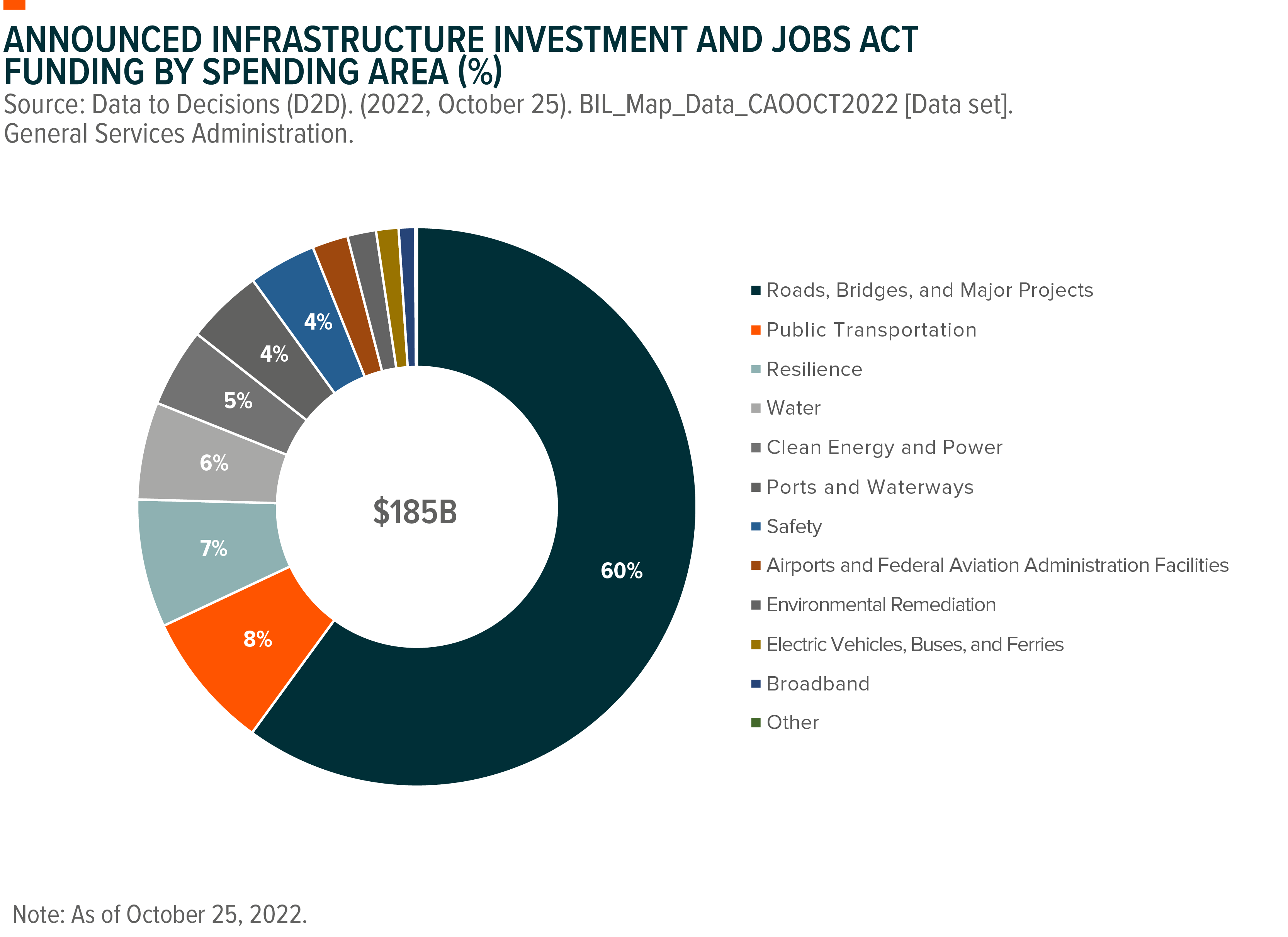 Propelled by the IIJA, several high-profile projects advanced to their next stages on schedule, many of which were planned or already under construction before the bill’s passage. The graphic below highlights several of these projects. Overall construction starts on new major projects are expected to accelerate later in the decade. 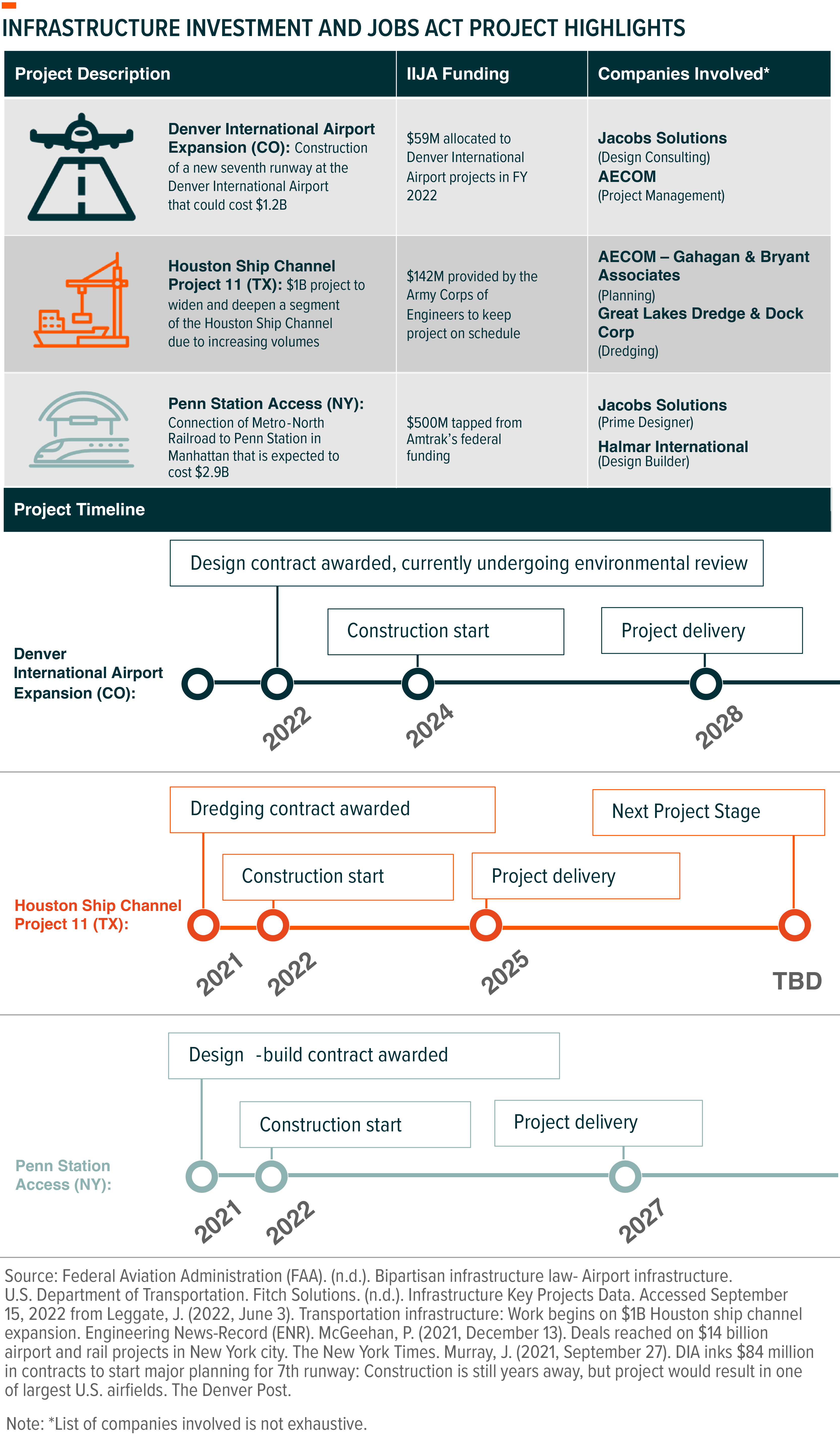 In some cases, the infrastructure bill is directly responsible for the replacement of critical transportation infrastructure. A notable example is the Fern Hollow Bridge in Pittsburgh, which made headlines when it collapsed in January 2022. Officials from the Pennsylvania Department of Transportation were able to secure $23.3 million in IIJA funding to expedite restoration efforts, allowing the bridge to reopen to traffic in December 2022.7 The Biden Administration estimated that without the IIJA, the project could have taken 2–5 years to secure funding and complete construction.8 The Fern Hollow Bridge is far from the only major transportation asset that is receiving IIJA-funded upgrades. To date, IIJA funding has been involved in launching over 2,800 bridge repair and replacement projects across the country, according to the White House.9 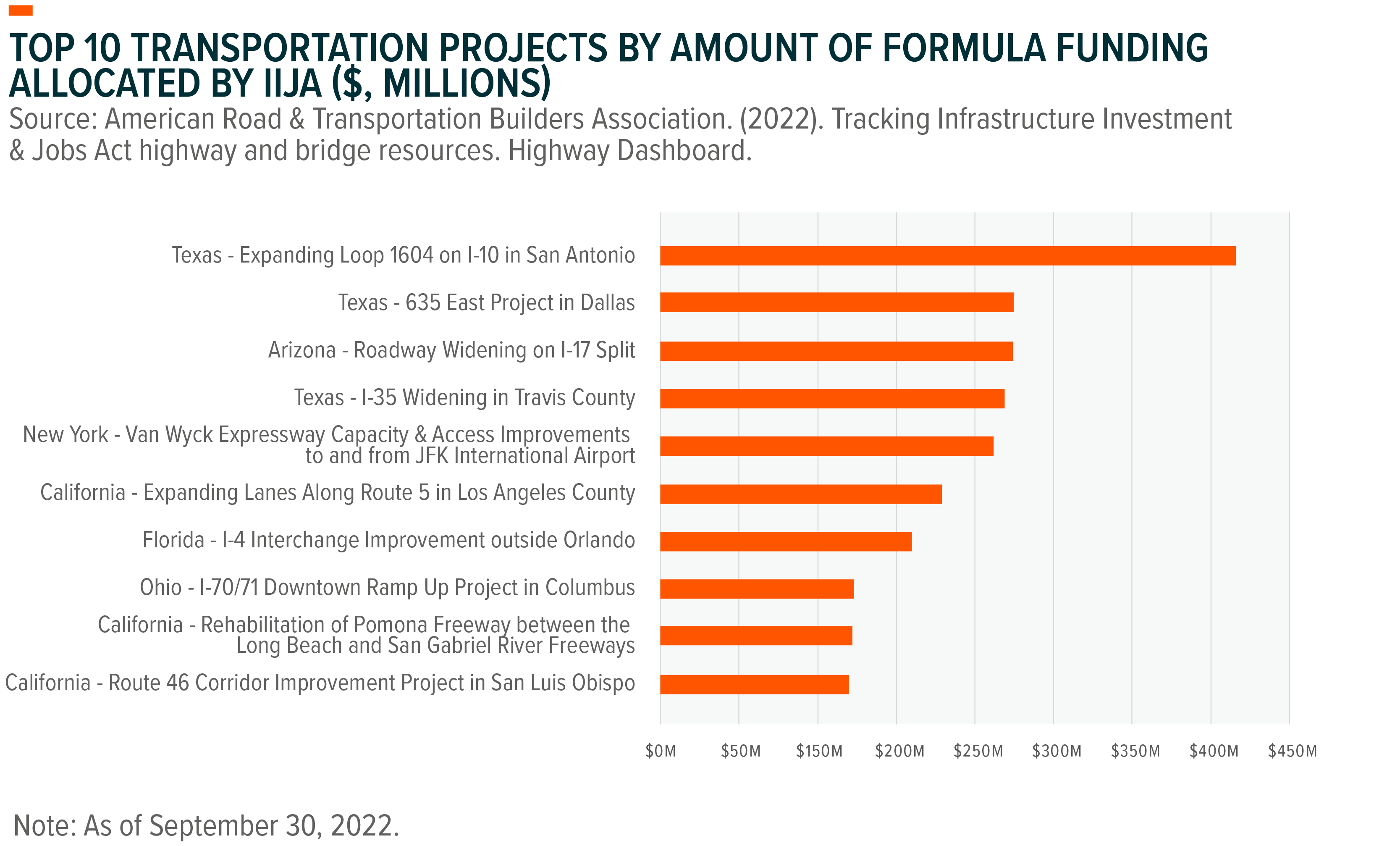 In the first year of the IIJA rollout, there were fewer project updates for next generation spending areas such as grid improvements and digital infrastructure. This is partially because funding for these initiatives will be delivered primarily through competitive grants or by programs that originated with the bill.

A notable exception to this idea is the National Electric Vehicle Infrastructure (NEVI) Formula Program, which has been a bright spot for IIJA mobilization. The bill directs $5 billion in formula funding over five years to build out a national network of electric vehicle (EV) chargers as part of the Biden Administration’s goal of 500,000 charging stations by 2030.10

State governments appear eager to secure this funding, based on how proactive local officials were in submitting their vehicle charging station plans. Every state had their plans approved by the August 2022 deadline, with as many as 35 plans approved ahead of time.11 As a result, all states are now eligible to tap into EV charging grants, creating opportunities for infrastructure companies. For example, the Arizona Department of Transportation contracted engineering and construction firm AECOM to plan statewide deployment of EV charging infrastructure and for project management services.12

Engineering and construction firms are already engaged in IIJA-funded projects, but these companies have bigger aspirations for 2023. Guidance from management teams throughout the U.S. infrastructure value chain suggests benefits from the bill have yet to begin in earnest.

Jacobs Solutions (Construction and Engineering):13 During a Q4 2022 conference, management suggested that “IIJA’s money is starting to come into play,” with the expectation that more relevant spending is likely in the second half of 2023.

United Rentals (Equipment):14 On their Q2 2022 earnings call, management said that they expect to “start seeing a benefit in 2023 and beyond” from the infrastructure bill.

Deere & Company (Equipment):15 On their Q4 2022 earnings call, investor relations (IR) said that they are “definitely seeing higher levels of demand in North America” that is attributable to IIJA spending. The IR team also said that the company is “just now starting to see benefit from infrastructure going into 2023.”

Insteel Industries (Materials):16 On their Q4 2022 earnings call, management said “the market is yet to layer in any meaningful funding from the Infrastructure Investment and Jobs Act, which should begin to materialize over the next 12 months.” Also, management suggested that the IIJA “materially enhanced” the 2023 outlook for their steel wire reinforcing.

Union Pacific (Industrial Transportation):18 On their Q3 2022 earnings call, management said that they anticipate a “positive impact to [the Company’s] construction business associated with the infrastructure bill,” in 2023.

Management teams also highlight the potential impact of the IRA and CHIPS Act. Passed in August 2022, these packages promote U.S. competitiveness in several key technologies such as semiconductors, renewable energy, batteries, and EVs. For example, management for Sempra Energy, an energy service provider and infrastructure developer, suggested during their Q3 2022 earnings call that the IRA’s emphasis on electrifying the grid could act as a “major driver” of demand for transmission and distribution infrastructure.19 Similarly during a December 2022 conference, management for temperature control equipment manufacturer, Trane Technologies, discussed how IRA incentives could enhance the attractiveness of energy efficiency measures, such as the Company’s heat pump offerings.20 In our view, the Inflation Reduction Act could also provide a major boost for renewable energy and cleantech. Further, reshoring supply chains would require construction of manufacturing capacity, which could catalyze demand for the goods and services offered by companies in the U.S. infrastructure development space.

Conclusion: IIJA Spending Off to a Good Start, More to Come

IIJA implementation is only beginning, but early results are encouraging for participants in the U.S. infrastructure space. This package is not intended as instantaneous stimulus, rather it is a long-term investment that is likely to play out over more than a decade. As such, continued IIJA rollout and execution on other recent legislation could generate even more meaningful benefits for the U.S. Infrastructure theme in 2023.

PAVE: The Global X U.S. Infrastructure Development ETF  seeks to invest in companies that stand to benefit from a potential increase in infrastructure activity in the United States, including those involved in the production of raw materials, heavy equipment, engineering, and construction. 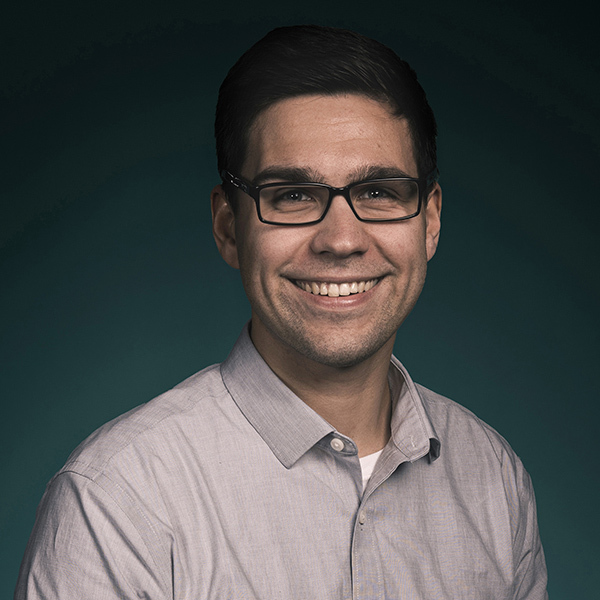 Carefully consider the fund’s investment objectives, risks, and charges and expenses. This and other information can be found in the funds’ full or summary prospectuses, which may be obtained at globalxetfs.com. Please read the prospectus carefully before investing.