On October 29th, 2020, we listed the Global X CleanTech ETF (CTEC). CTEC seeks to invest in companies that stand to benefit from the increased adoption of technologies that inhibit or reduce negative environmental impacts. This includes companies involved in renewable energy production, energy storage, smart grid implementation, residential/commercial energy efficiency, and/or the production and provision of pollution-reducing products and solutions.

The need to mitigate the negative environmental impacts of human activity is more immediate than ever. 2020 is on the verge of becoming one of the hottest years on record. Some projections show that the global average temperature in 2020 is 0.75°C higher than in 1980, and under current policies the world could warm 4.1°C above pre-industrial levels by 2100.1,2 The effects of such warming could have significant social and economic ramifications:

The link of this warming to human activities is widely accepted. Over 75% of warming comes from carbon dioxide emissions (CO2) and humans are responsible for a 47% increase of such emissions since the start of the industrial revolution.7,8 Albeit a distressing existential burden, this connection also means that humans can turn the ship around. Roadmaps to climate action like 2016’s Paris Agreement and more recent aggressive commitments to carbon neutrality from the European Union (EU), China, and Japan, and from companies like Amazon and Walmart offer our best hope in doing so.9,10,11

At the center of most of these plans, the aggressive adoption of clean technologies, or “CleanTech,” is essential to making carbon neutrality a reality and will require significant investment. A scenario presented by the International Renewable Energy Agency (IRENA) estimates that $110 trillion of cumulative global investment would keep warming within an acceptable range, with ~80% of that going to clean technologies.12 In the following, we explore CleanTech’s role in tackling negative environmental impacts and investigate its current and future adoption. 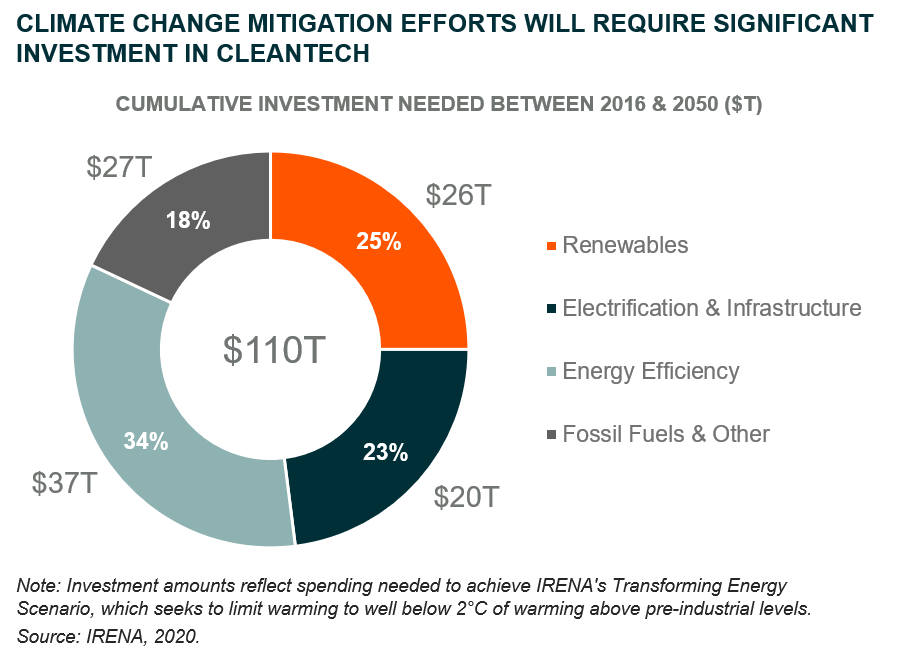 Ramping Up the Transition to Renewable Energy

Transitioning to renewable energy sources is a core tenet of climate change mitigation plans. These sources include on/offshore wind, solar photovoltaic (PV), hydropower, geothermal, and the use of renewable hydrogen in fuel cells. According to some estimates, substituting fossil-fuels like coal, oil, and natural gas with clean alternative energy sources could reduce emissions by 52% of what is  needed to adequately limit warming.13

Recent years have seen clean energy sources’ share of global electricity production in the power sector gain significantly on that of emissions-producing fossil fuels. At the end of 2019, renewables produced 26% of global electricity, up from 19% at the beginning of the decade.14 Much of this growth can be attributed to the rapidly decreasing costs of renewables like solar PV and wind, increasing the affordability of expanding renewable capacity. In the past decade, the levelized cost of electricity, or lifetime cost, of solar PV and of on/offshore wind sources decreased 80% and 55% respectively, making them more affordable than fossil fuels in most of the world.15 Tellingly, solar electricity generation (by TWh per year) increased 2,047% over the same time period, while wind sources’ increased 313%. We expect this growth to continue as economies of scale and market forces drive down the price of components like wind turbines and photovoltaic cells.16 While this makes economic sense, warming-related policies and milestones that include renewables’ share of the electricity mix reaching 57% by 2030 and 86% by 2050 should add further incentive.17 Between now and 2050, investments in wind and solar capacity could reach an average $1 trillion per year to effectively scale renewable electricity.18 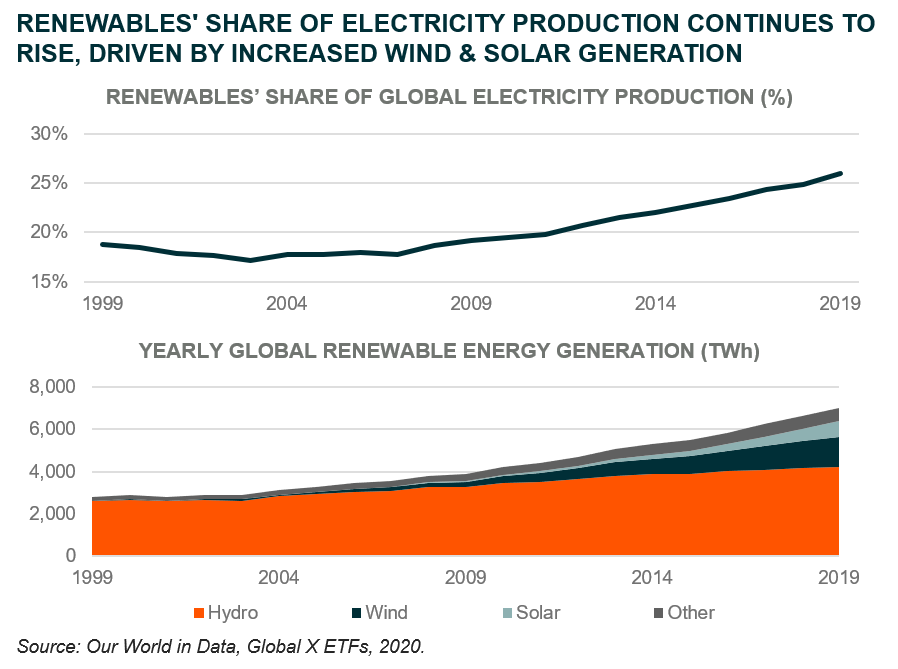 Yet, electricity from the power sector is just a portion of energy consumption. Renewables only represent 11% of the global energy mix on an overall basis, far off from the 28% share by 2030 suggested by emissions-warming models.19,20 Adoption of traditional renewables in buildings, industrials, and transportation is lagging as these sectors have yet to see full electrification. We’ll explore CleanTech approaches to electrification in the next section, but other solutions may render this unnecessary – namely, using energy from renewable hydrogen.

Hydrogen is the most plentiful element on the periodic table and is always bound to other elements like oxygen when found in nature.21 Take H2O, or water, for instance. Electrolysis describes the process of using electricity to separate hydrogen from oxygen in water. Hydrogen extracted in this manner can be stored in pressurized tanks and recombined with oxygen in fuel cells to generate energy.22 While hydrogen’s abundance makes it an extremely attractive source of energy with vast market potential, renewable hydrogen is still in the early innings. Electrolysis is only emission-free when powered by renewable energy and electrolyzers are not yet cost-competitive.23 Still, in March 2020, Japan opened the world’s largest green hydrogen plant that uses solar panels and runoff grid energy to power their electrolyzer.24 Encouragingly, electrolyzer costs are decreasing and increased renewable capacity and resulting electricity surpluses from generation might bring renewable hydrogen to the forefront sooner than expected.

Making More Productive Use of Energy

The way we use energy is almost as important as how we produce it. Drastic improvements to and expansion of electric infrastructure and energy efficiency technologies could reduce emissions by over 40% of what is needed to keeping warming within tolerable levels.25

Increased end-use electrification can play an important part in this. Electric heat pumps in buildings and technologies that enable electric surface transportation, for example, can expand renewables’ ability to meet power demands, reducing emissions in sectors where decarbonization efforts have been lackluster. Improved energy efficiency from electrification can further reduce emissions by putting electric energy to better use. Sticking with building infrastructure, electric heat pumps can use 1 kilowatt-hour (kWh) of input electricity to generate 3 kWh of heat, or in other words are 300% efficient. Traditional gas boilers can only achieve 90% efficiency.26

Increasing long- and short-term energy storage capacity can further support electrification and efficiency efforts. Renewables like wind and solar are considered variable renewable energy sources in that the amount of energy they generate fluctuates, sometimes producing it in surplus of demand. Stationary storage solutions like batteries can store excess energy for future use and greater power system flexibility. According to IRENA, battery capacity would have to expand from today’s 30 GWh to 9,000 GWh in 2050 to meaningfully contribute to adequate decarbonization.27 And as batteries become more affordable – battery prices decreased an average 18% annually from 2010 to 2019 – reaching this level of capacity is not unimaginable. 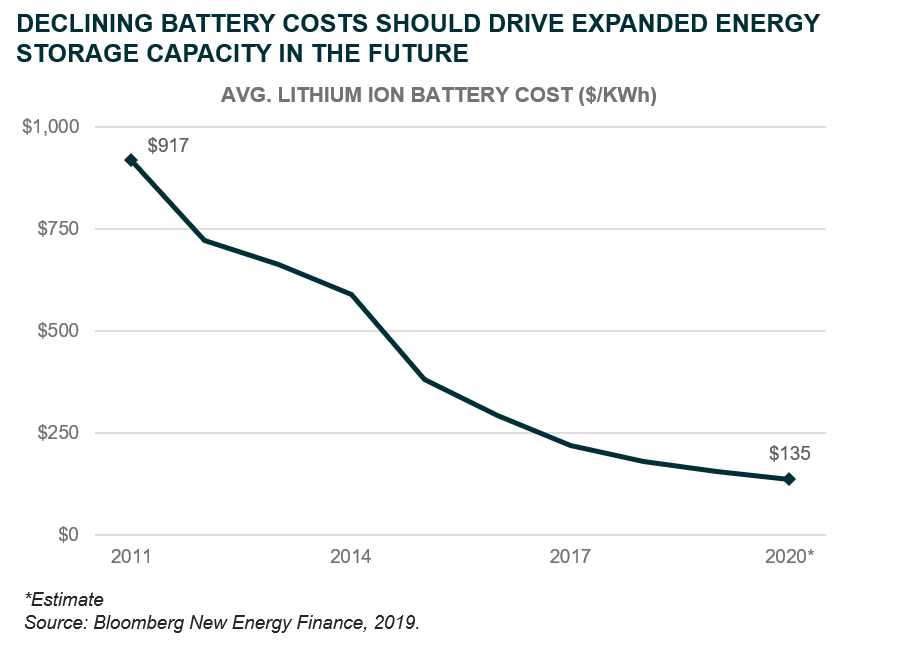 Finally, smart electric grids tie all of these tools together, using technologies like cloud computing, artificial intelligence and the internet of things to dynamically allocate power based on demand and more seamlessly integrate renewables by taking advantage of the flexibility provided by battery technology.28 The distributed nature of these grids also means that businesses and homeowners can actively contribute to energy efficiency, monitoring their own usage with new access to data and automatically or manually selling stored or generated power back to the grid. Bloomberg New Energy Finance estimates that electric grids will need $14 trillion in investment between now and 2050 to fully realize the benefits they offer to power systems.29

CleanTech also includes technologies that enable carbon capture, use, and storage (CCUS), which captures and repurposes fossil fuel emissions before they enter the atmosphere, and carbon dioxide removal (CDR), which seeks to remove existing atmospheric emissions.30 Once considered fringe climate change mitigation methods, these processes are seeing wider acceptance as effective complements to conventional interventions. Many purport that increased use of renewables, expanded electric infrastructure, and improved energy efficiency get us to 90% decarbonization and that achieving net-zero emissions will require CCUS and CDR.31

Modern CCUS tech can capture as much as 90% of emissions when deployed alongside fossil fuel energy sources.32 In this approach, captured CO2 is liquified and geologically stored, either permanently or for commercial use. More attractively, CCUS can be carbon neutral or negative when used in tandem with renewable biomass, which is plant material that can be used as fuel. Plants, which already rely on CO2 for photosynthesis, can use captured CO2 as feedstock to create more renewable biomass, with excess emissions being stored.33

CCUS adoption is still early stage, but recent implementation is encouraging. Currently, there are 18 large-scale CCUS facilities around the world which can capture up to 34 million tons of CO2 a year.34 Expensive carbon capture technology is the primary inhibitor of CCUS and CDR adoption, though the Carbon Capture & Storage Association estimates that project costs could decrease by over 40% in the early 2020s.35 As costs decline and milestone dates for emissions targets edge nearer, we expect CCUS and CDR adoption to rise.

Clean technologies like those involved in renewable energy production, energy storage, smart grid implementation, energy efficiency, and pollution-reduction are essential to tackling negative environmental impacts like climate change. As the economic and societal implications of these impacts continue to mount, governments and companies are ramping up carbon neutrality efforts by setting aggressive emissions targets and committing to CleanTech adoption. In our view, these commitments will translate to significant investment that should benefit the CleanTech industry moving forward.

Investing involves risk, including the possible loss of principal. The investable universe of companies in which CTEC may invest may be limited. CleanTech Companies typically face intense competition, short product lifecycles and potentially rapid product obsolescence. These companies may be significantly affected by fluctuations in energy prices and in the supply and demand of renewable energy, tax incentives, subsidies and other governmental regulations and policies. International investments may involve risk of capital loss from unfavorable fluctuation in currency values, from differences in generally accepted accounting principles or from social, economic or political instability in other nations. CTEC is non-diversified.