On December 9th, 2021, we listed the Global X MSCI Vietnam ETF (VNAM) on NYSE Arca. VNAM seeks to invest across the large, mid, and small cap segments of the Vietnam market.

The rapid emergence of Vietnam’s economy has largely been driven by its manufacturing sector. Fortuitously located along the water in a dynamic economic region, Vietnam is a trading power with $29.9bn in exports as of Nov 2021, and its low labor costs have made it a center for smartphone and computer part production.1 In fact, Vietnam’s promising economic trajectory leads commentators to often compare it to China or the Four Asian Tigers (South Korea, Singapore, Taiwan and Hong Kong), implying that the country could continue to emerge as a regional, if not global, powerhouse.

Since the mid-1980’s, Vietnam’s economic reforms have helped to accelerate growth and capture attention from around the globe. Vietnam is one of the most robust frontier markets with an average growth rate of 6.34% between 2000 and 2021. And Vietnam’s progress in alleviating poverty is creating a new generation of middle-class consumers. Since the economic reforms of Doi Moi in 1986, at which time Vietnam had a GDP per capita of $422.78, Vietnam entered middle-income status in 2010 and now has a GDP per capita of $2,785.72.2 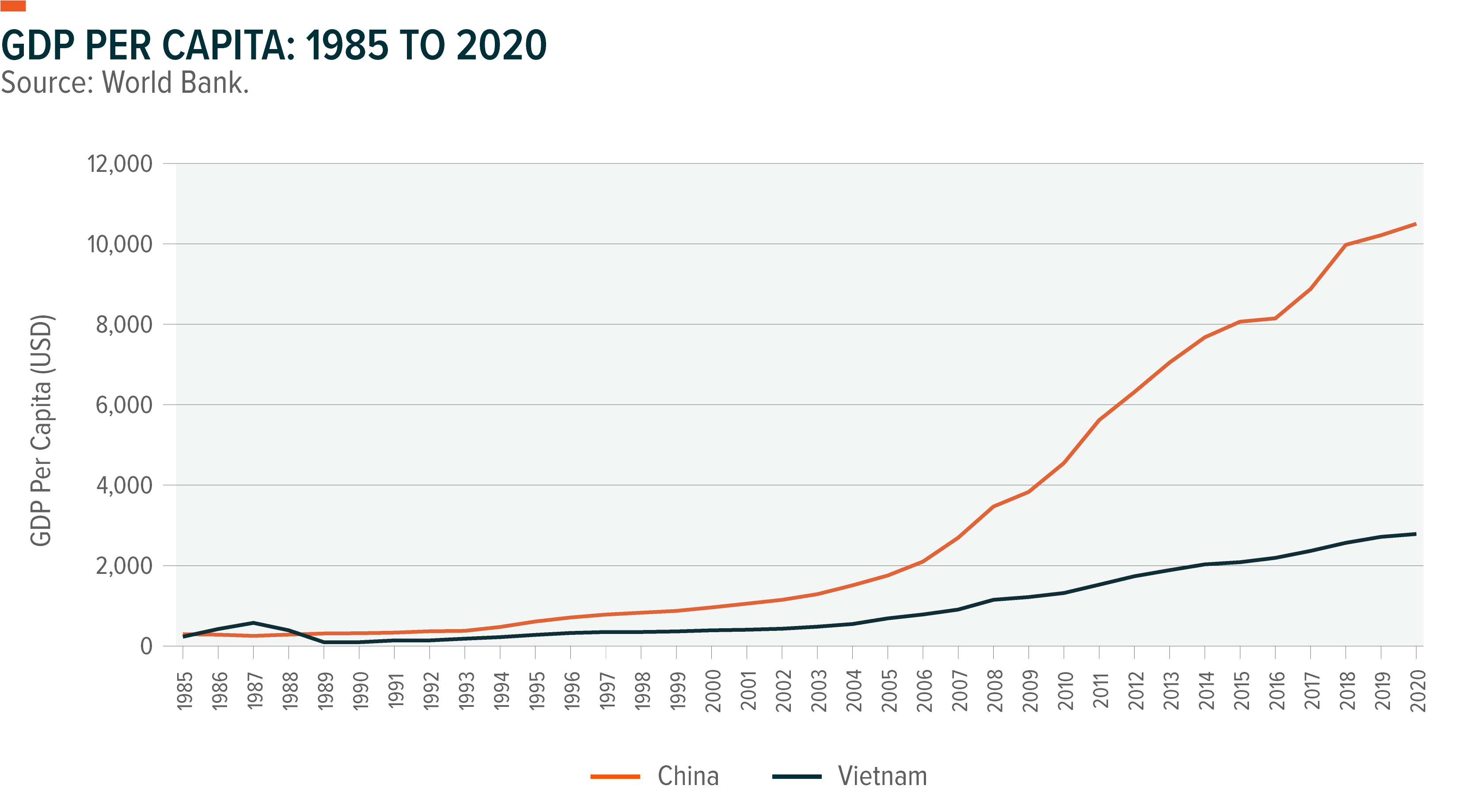 Vietnam in the Context of ASEAN

Founded in 1967 with six members, the Association of Southeast Asian Nations (ASEAN) is an emerging economic force that had a combined GDP of $3.08tn in 2020, putting it on par with major economies like Germany and the United Kingdom.3 The CLMV countries (Cambodia, Laos, Myanmar, Vietnam) joined much later in the 1990’s, with Vietnam joining in 1995, but are playing key roles in its growing stature. 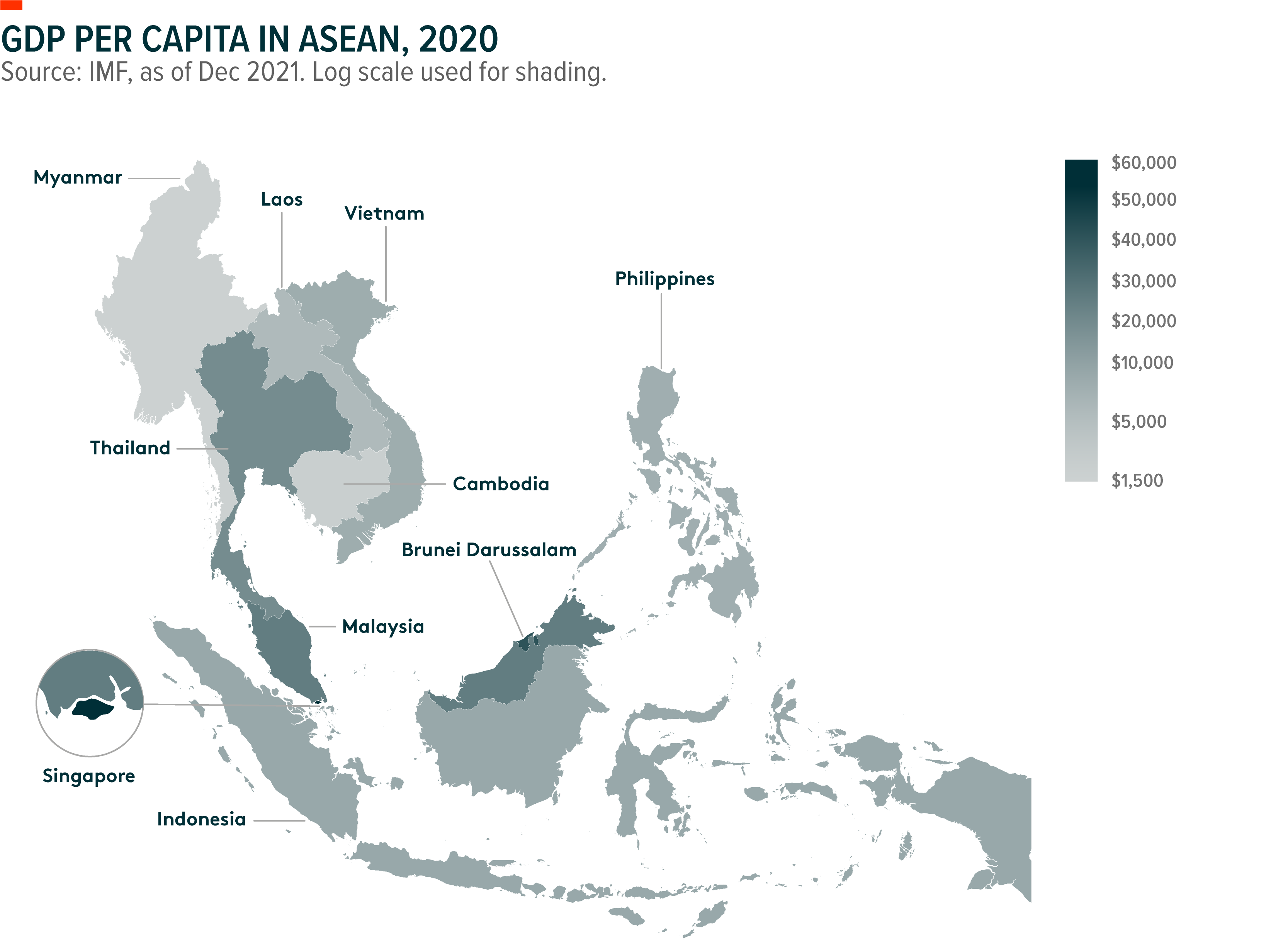 In 1986, a political and economic reform initiative known as Doi Moi marked the start of a new era for Vietnam’s growth. In 1988 Vietnam began winding down subsidies, moved away from a centralized model of production and also introduced a foreign investment code.4 More changes were introduced in the 1990’s that further reformed the economic system. These changes ultimately led to Vietnam integrating with the global economy and joining the World Trade Organization in 2007.

A confluence of positive trends are putting wind into the sails of Vietnam’s economy. Neighbors are taking note as the competitive landscape in the region shifts accordingly. Investors often claim that Vietnam’s economy is in a similar position to China’s 10 to 15 years ago, and although there are considerable political and economic differences between the two countries that must not be overlooked, it is true that Vietnam has the potential to somewhat mimic China’s rapid growth.

As Vietnam’s economy grew, it became an attractive destination for manufacturing. Manufacturing’s contribution to Vietnam’s GDP stood at 16.69% as of 2020.5 In particular, Vietnam excels in the manufacturing of electronic devices, especially smartphones. Exports of electronic goods, computers, smartphones, and all relevant parts made up 33.9% of Vietnam’s total exports in 2020, and one in ten smartphones were produced in Vietnam as of 2018.6,7

Many major companies turn to Vietnam for their manufacturing needs. Among these, is a prominent example with nearly 25% of Vietnamese exports as of 2020.8

Since 2017, Vietnamese manufacturing has been a winner from US-China economic tensions. US tariffs on Chinese imports increased costs for Chinese manufacturers working in a number of areas, but most notably cell phones and computers, both of which are products that Vietnam excels in.9 Faced with higher volatility in China, some manufacturers found refuge in Vietnam. Recently, the COVID crisis and the ensuing lockdown measures have created short-term setbacks for Vietnamese manufacturing, such as labor shortages and temporary drops in production.

One of the most impressive aspects of Vietnam’s growth is its strong position in global trade. Vietnam is conveniently positioned by the South China Sea, near developed markets like Japan and Singapore, as well as rapidly growing markets like China and Thailand. Vietnam’s exports as a share of GDP stood at 106.12% as of Sep 2021, putting it only behind Hong Kong and Singapore in the APAC region.10 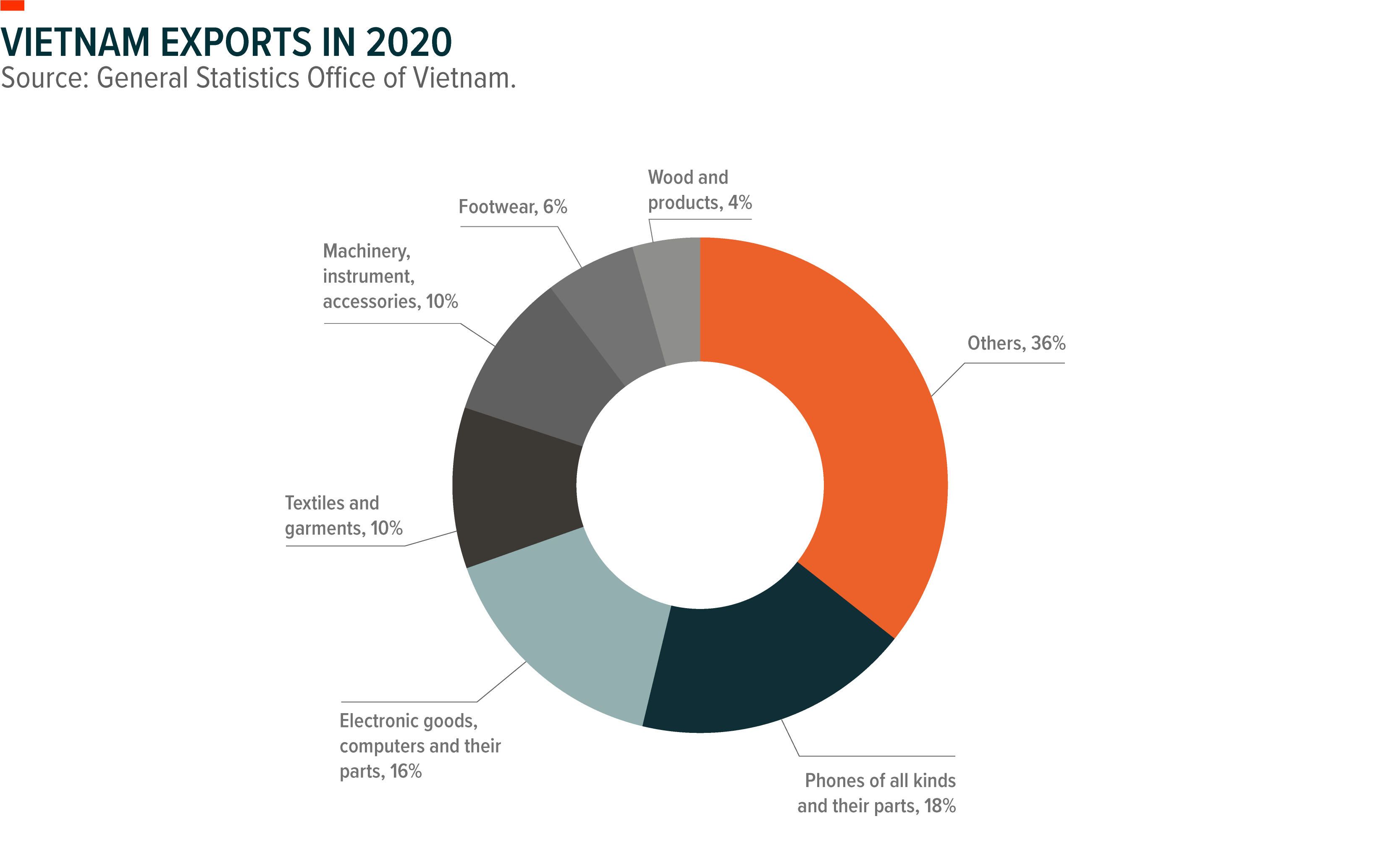 Vietnam’s integration into the global economy enabled its transformation into a regional trade hub. The US-Vietnam bilateral trade agreement which was signed in 2000 and Vietnam’s ascent to the World Trade Organization in 2007 laid a foundation for that success. More recently, Vietnam joined the Comprehensive and Progressive Agreement for Trans-Pacific Partnership (CPTPP) in 2018, giving it access to strong trading partners like Japan, Canada, Australia, Singapore, New Zealand, and Mexico.

Vietnam’s relatively young and tech-savvy population is spurring the development of the country’s digital economy. That is certainly a trend that policymakers are hoping to accelerate; the Vietnamese government set the ambitious goal of the digital economy making up 20% of GDP by 2025 and 30% by 2030.11 It is also a trend that is very necessary, as Vietnam still lags fellow Southeast Asian economies in certain areas of digitalization, and as of July 2021 the digital economy only makes up 8.2% of GDP.12 In other words, to realize those goals, the digital economy’s share of total output would need to more than triple within less than ten years.

As a testament to their willingness to adopt new technologies, a 2018 survey revealed that 54% of Vietnamese consumers are willing to shop for groceries online, a rate that was significantly higher than Southeast Asian peers like Thailand at 35%, Singapore at 25%, Indonesia at 23% and Malaysia at 21%, and only slightly behind China at 59%.13 Vietnam’s E-commerce market is anticipated to grow at an annual rate of 30% between 2021 and 2025.14

Despite the short history of Vietnamese financial markets, they have produced enticing returns. Over the last ten years the Vietnam Ho Chi Minh Stock Index (VN index) has outperformed many other ASEAN, Asia, and Emerging and Frontier Market indices by a margin. Valuations in Vietnam are also cheap relative to other options in the region. Furthermore, throughout 2020, EPS (earnings per share) growth in Vietnam has outpaced that of India, APAC, and Emerging Markets. 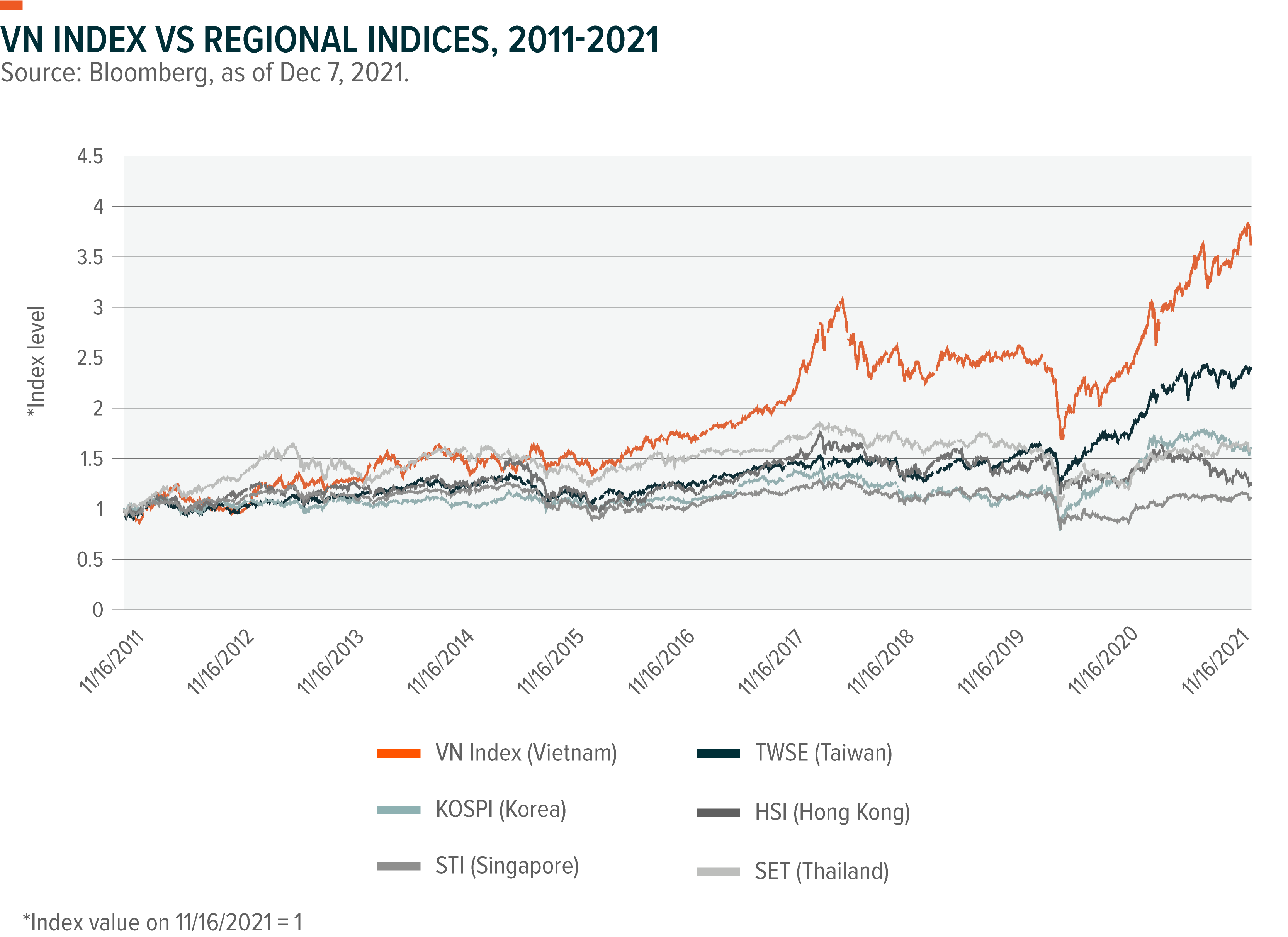 Index returns are for illustrative purposes only and do not represent actual fund performance. Index returns do not reflect any management fees, transaction costs or expenses. Indices are unmanaged and one cannot invest directly in an index. Past performance does not guarantee future results. VNAM is not designed to track the VN Index.

Despite leaps and bounds in economic growth, Vietnam still faces challenges. Among these is the shock of COVID, which Vietnam was able to respond to effectively and outperform most of the world in reducing infections and deaths. But in Q3 2021, a zero-COVID approach to limiting additional outbreaks had a terrible impact on the economy, prompting a shift in strategy. Meanwhile, Vietnam’s capital market reforms are still not moving at an ideal pace.

Vietnam’s decisive actions in restricting inbound travel, setting up quarantine centers and testing for cases towards the beginning of the COVID outbreak allowed it to go through all of 2020 and part of 2021 with less than 100 recorded deaths. However, Vietnam encountered challenges as it entered the second half of 2021. A sudden rise in cases in June 2021 built up towards 25,448 reported deaths as of Dec 1, 2021.15

The rise in cases resulted in a record GDP contraction of 6.17% in Q3 2021, prompting Vietnam to shift away from the zero-COVID strategy.16 Strict COVID protocols meant factories had to shutdown if one case emerged. After lockdowns were lifted in October, a wave of migrant workers moved out of urban areas like Ho Chi Minh City, creating labor shortages that manufacturers are still grappling with today.

Challenges from COVID will likely persist into 2022 as Vietnam readjusts its strategy, but these challenges are far from unique to Vietnam.

Vietnam’s stock market has made considerable progress despite only being established in 2000. The country has also made considerable progress in opening up to foreign investors. However, a number of challenges exist, such as the fact that the stock market is relatively small with total capitalization equaling 72.6% of GDP, and the fact that only 3% of the population invests in it.17

We believe Vietnam is an up-and-coming market that is full of potential. Its advantages in trade and manufacturing set it apart from other emerging markets, and its digital economy holds promise. Furthermore, enticing valuations may make its financial markets an attractive destination to invest in. It remains to be seen how Vietnam will deal with the shock of COVID in 2022 and how it will move forward with capital market reform, but we believe the investment thesis for the country holds up strong.

1. Trading Economics, General Statistics Office of Vietnam, as of Nov 2021.

Investing involves risk, including the possible loss of principal. International investments may involve risk of capital loss from unfavorable fluctuation in currency values, from differences in generally accepted accounting principles, or from economic or political instability in other nations. Emerging markets involve heightened risks related to the same factors as well as increased volatility and lower trading volume. Securities focusing on a single country and narrowly focused investments may be subject to higher volatility. VNAM is non-diversified.