Between a sustained energy crisis in Europe, rampant inflation globally, and ongoing supply chain disruptions around the world, investors across developed economies are grappling with unpredictable markets. Also weighing heavily on investor sentiment is the abrupt removal of pandemic-related monetary stimulus by Western central banks.

In the United States, recent weakness in macroeconomic data prompted investors to look for more defensive strategies and shelter in bonds. However, the pullback in the data was short-lived and the macro backdrop in the United States remains broadly supportive, helping to sustain growth. In Europe, Q1 2022 GDP growth remains solid at 0.3%, despite energy challenges due to the war in Ukraine, lower demand from China, and a range of supply chain issues.1 As for China, its current economic pain appears to be largely of its own doing, as the nation’s rolling lockdowns and zero-COVID policy weighs on indicators.

Despite these turbulent global markets, we can identify several clear positives across the thematic space. Attractive thematic valuations may offer better value than broader tech indices, especially as the structural drivers for themes, such as Robotics, Telemedicine & Digital Health, and Cleantech, remain intact and appear likely to offset short-term macroeconomic weaknesses. As a result, we believe that it may be a good time for investors to seek exposure to these themes at the dip while keeping their focus on the long-term drivers.

Punished by higher interest rate expectations, major tech companies have suffered sharp losses this year, led by Microsoft’s (MSFT) 22% decline and Apple’s (AAPL) 17%-plus decline.2 In communications technology, Facebook parent Meta (FB) is down 44% and Netflix (NFLX) is down almost 70%.3 However, in the wake of these declines, some investors started unwinding their value positions, which could suggest that inflation expectations have peaked.

In our view, valuations for several themes now look quite favorable, including Robotics, Telemedicine & Digital Health, and Cleantech. Fintech in particular looks compelling amid a steeper yield curve, positioning the segment to benefit from late-cycle business dynamics. Currently, the Indxx Global FinTech Thematic Index is trading at a price/sales (P/S) ratio of 2.8x, below its long-term average of 5.9x.4 Also, high inflation should benefit themes with exposure to real assets, such as Energy and Cleantech, Commodities and Lithium & Battery Tech, and Infrastructure—all of which may be good diversifiers in multi-asset portfolios.

Medium-Term Outlook: Macro Dynamics in the United States and Japan Can Differentiate Themes

In the medium term, investors should avoid falling into value traps, but they also must consider the unique backdrop of this macroeconomic environment. Themes that provide quality and value are well-positioned in this late business cycle phase, especially themes with exposure to stronger markets, such as the United States and Japan. Good economic conditions in the United States and the accommodative monetary policy stance in Japan may help stocks in these markets outperform.

For example, the Robotics theme appears to be well-positioned, as most of the pure play robotics companies are in the United States, Japan, and Switzerland, which have stronger macro backdrops than the rest of the world. The Indxx Global Robotics & Artificial Intelligence Thematic Index dropped by almost 36% since the beginning of the year, and its valuations are now close to its long-term average.5

The table below shows how themes may provide investors with quality and value. Currently, valuations for most themes look more compelling than the Nasdaq. 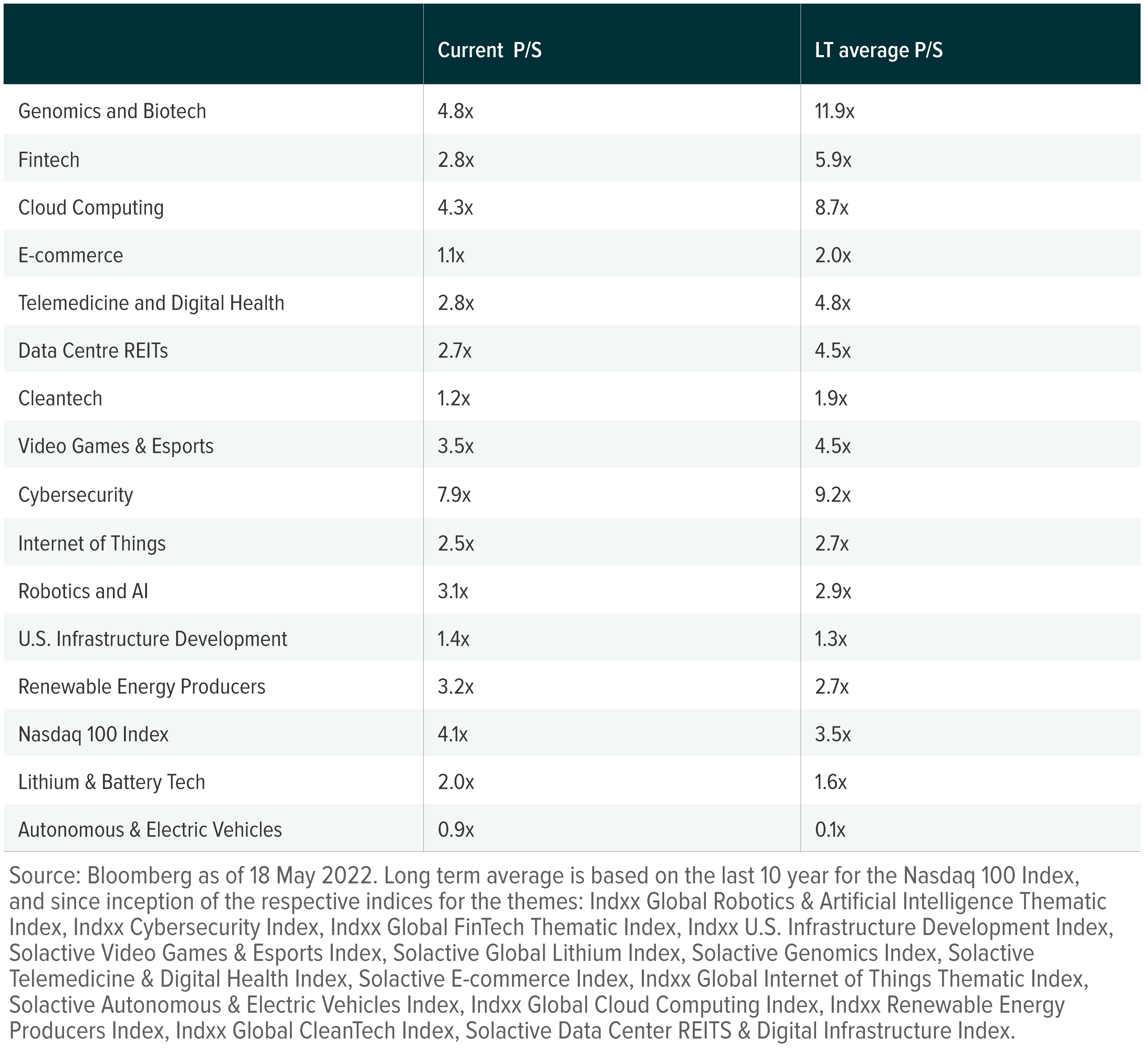 Another area to watch is rising capital expenditure (capex) in the United States, which is typical of a late cycle. In Q1 2022, capex among S&P 500 companies increased 19% year-over-year, despite the prospect of Federal Reserve rates hikes, and it’s now 30% above pre-COVID levels (Q1 2019).5 Companies are expected to continue to invest, as the capex guidance ratio rose to 1.8x according to Bank of America Global Research, the highest level since June 2021.6

Concentrated on technology, we expect this capex to support a theme like Robotics as it helps automate systems across supply chains. Overall, the risks to the outlook for U.S. capex this year seem fairly limited, as a surprise from a corporate tax shock or renewed trade disputes between the United States and China or the European Union look rather unlikely given the geopolitical situation with Russia. 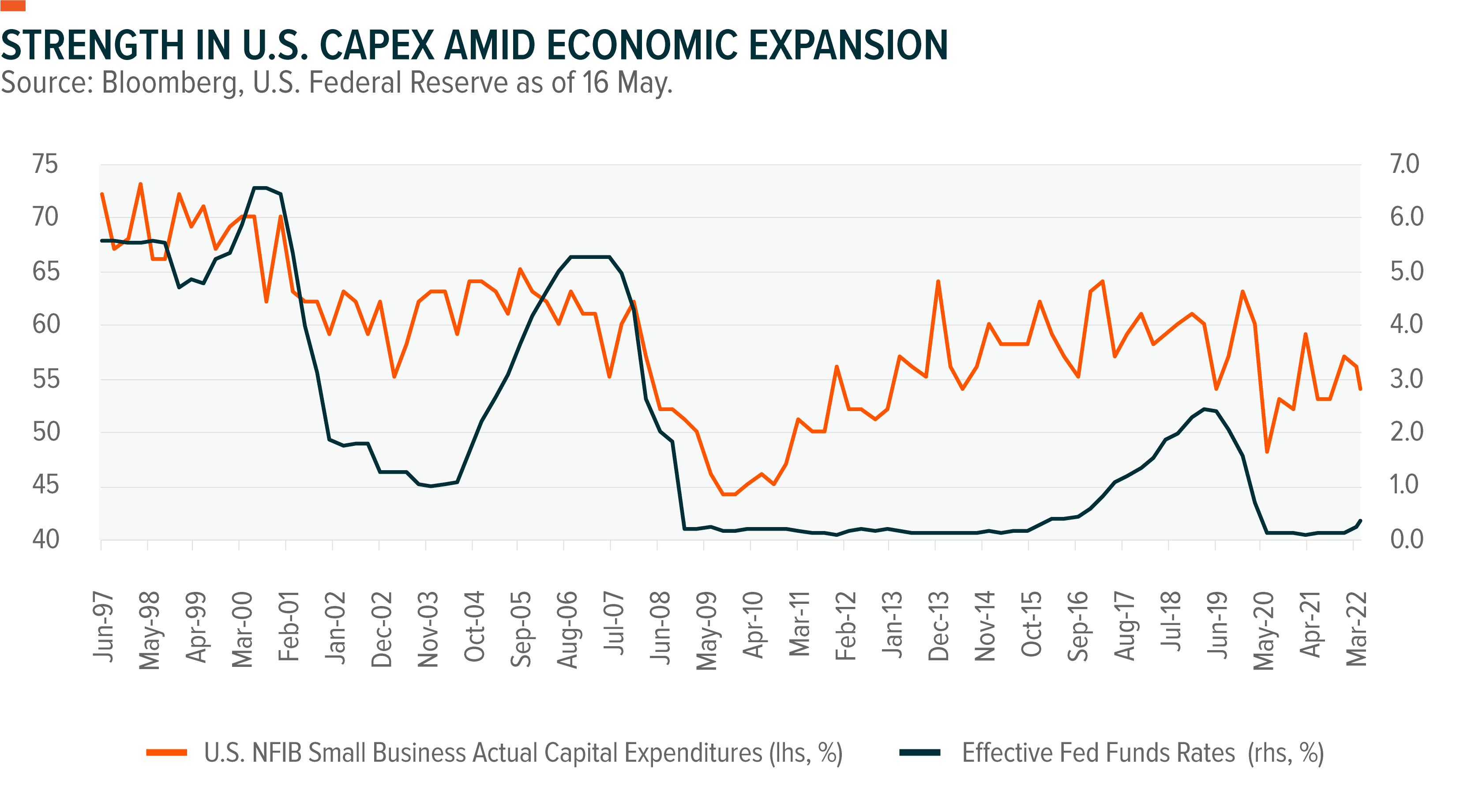 As this economic cycle continues to mature, investors should consider defensive themes that offer strong hedges against persistent geopolitical risks, like those emanating from Eastern Europe and China. In our view, Telemedicine & Digital Health may benefit from macro risks skewed to the downside. The pandemic shed light on system inefficiencies in healthcare, and the economic and social benefits of telemedicine are quickly creating an environment where the technology is far more integrated across healthcare verticals. The Telemedicine & Digital Health theme is attractively valued, currently trading at a P/S ratio of 2.8x, below its long-term average of 4.8x.7

We view the Cybersecurity theme as another good hedge against geopolitical risks. A low beta of 0.6 with the MSCI ACWI Index suggests Cybersecurity offers diversification benefits, and its current valuation is attractive, trading at 7.9x, which is below its long-term average of 9.2x.7 Cybersecurity is also set to benefit from strong long-term tailwinds, as highlighted by a recent PwC survey of executives. The survey found that 69% of executives plan to increase cybersecurity spending in 2022 following a spate of high-profile cyberattacks on governments and businesses last year.9 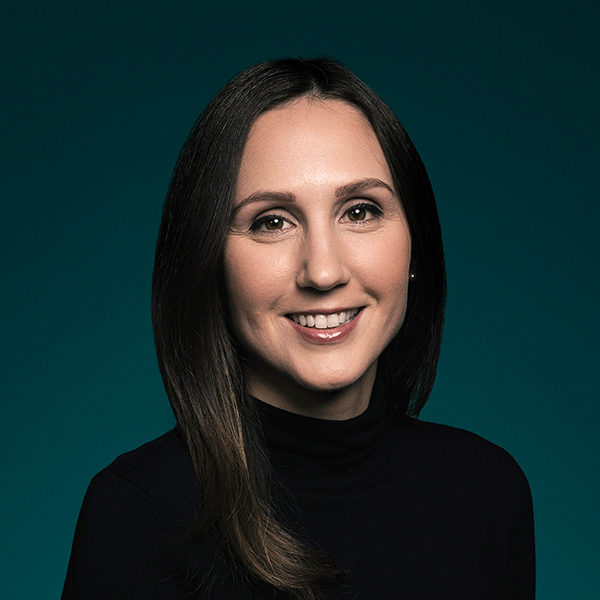