Is Greece on the Road to Recovery?

The global financial crisis exposed the fragility of Greece’s heavily indebted economy, as it was one of the worst-hit nations in the downturn. While much of the world has since recovered, Greece’s economy has struggled, slogging through eight years of recession, a slew of austerity measures, and tense negotiations with creditors. After nearly a decade, is Greece finally on the mend?

In this piece, we seek to shed light on this question by exploring:

The Origins of Greece’s Debt Crisis

Before 2009, Greece appeared to the outside world as a dynamic, fast growing economy. From 1999 to 2009, the nation averaged 3.6% annualized GDP growth, qualified to join the Eurozone, and earned the ‘developed market’ classification from index provider MSCI.1

Many of these economic accomplishments, however, were fueled by excessive borrowing. The Greek government took advantage of low borrowing costs to fund unsustainable public benefits and spending programs and hid the extent of its indebtedness from investors. 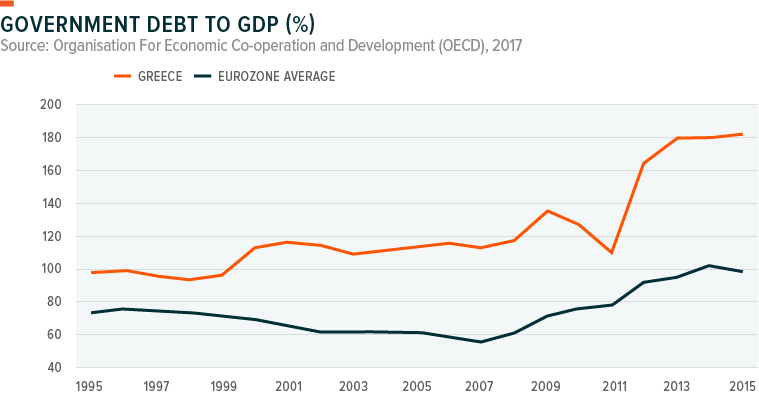 As the global financial crisis spread in 2009, Greece’s debts became unmanageable. A 15% budget deficit that year led credit rating agencies to downgrade the country’s debt, causing Greece’s public borrowing costs to soar.2 Despite an effort in 2010 to rein in spending, the country eventually acknowledged that it was headed towards a possible default. Given the amount of Greek debt held by major financial institutions around Europe, the ramifications of such a default were massive, even calling into question the Eurozone’s survival. To prevent a potential catastrophe, the International Monetary Fund (IMF) and EU extended a €110 billion bailout in exchange for various austerity measures. Shortly after, the European Central Bank (ECB) launched its Securities Market Program to purchase Greek government debt, among other distressed European nations.

Since 2010, Greece has enacted 14 austerity packages to bring its budget back into balance.3 These austerity measures included various tax hikes, cuts in public spending, and reductions in public pensions and benefits.4 Economically, these measures have amounted to a dramatic fiscal tightening regime in the midst of a recession, a move that has surely stunted the country’s ability to recover from recession. Yet at the same time, the country successfully reversed its deficit from an alarming 15%, to a modest primary budget surplus in 2016, indicating progress has been made to get its debt levels under control; a necessary condition to eventually return the economy to sustainable growth.ii

The Delicate Balance between Greece’s Government, Creditors, and its Economy

While Greece has shored up its annual deficit, the country’s staggering amount of debt has kept the country dependent on a steady stream of additional loans to pay off maturing issues. The necessity for creditors like the IMF to continually reach agreements with the Greek government in exchange for new loans has led to periods of brinksmanship and bouts of extreme volatility in the domestic stock market.

Creditors want meaningful progress on austerity measures in order to reduce the overall debt burden, while the Greek government must manage economic growth and answer to its constituents’ calls for less harsh policies. If creditor negotiations break down, additional funds may not be released, and in turn, risk increases for of a possible sovereign default or even a Eurozone exit, coined as “Grexit.”

While the impact of a possible Grexit is unknown, many economists expect it could cause a bank run, as depositors would seek to cash out their euro-denominated assets rather than face a potential conversion to a less valuable new currency. A bank run, combined with rising sovereign credit risk, would dry up liquidity, reduce bank reserves for lending, and cause interest rates to spike, threatening the nation’s fragile economic recovery. In short, the Greek government and creditors have significant incentive to avoid a Grexit, but tense negotiations around bailout terms hasn’t stopped both sides from bluffing at times.

What is the Outlook for Greece?

While the Greek economy remains fragile, recent developments have given investors reason to believe the tide may be turning after a difficult 8 year period. Returning the country to a primary budget surplus has ‘stopped the bleeding’ by somewhat alleviating tensions in creditor negotiations and stabilizing the overall economy. In the first half of 2017, Greece demonstrated 0.8% economic growth driven by rising consumption and exports, possibly setting the country up for its highest annual economic growth since 2007.5,6 If all goes well, Greece could exit the current bailout program in August 2018, leaving behind its harsh constraints, and relying on the bond markets for capital instead. Greece recently successfully completed its first bond offering in three years and credit rating agency Fitch recently upgraded Greece from CCC to B- and issued a positive outlook.7

While the road to a full recovery is still a long one, strengthening equity markets in Greece this year demonstrate support for the country’s recent accomplishments.  The markets appear to be celebrating Greece’s “repair and recover” approach rather than demanding immediate economic growth via less sustainable measures. As the country whittles down its debt load and returns to normalcy by exiting its bailout, the country could eventually return to a path of sustainable long-term economic growth.

GREK: Global X MSCI Greece ETF invests in among the largest and most liquid companies in Greece.

Carefully consider the Fund’s investment objectives, risks, and charges and expenses. This and other information can be found in the Fund’s full and summary prospectuses, which may be obtained by calling 1-888-GX-FUND-1 (1.888.493.8631), or by visiting globalxfunds.com. Please read the prospectus carefully before investing.

Investing involves risk, including the possible loss of principal. International investments may involve risk of capital loss from unfavorable fluctuation in currency values, from differences in generally accepted accounting principles, or from economic or political instability in other nations. Emerging markets involve heightened risks related to the same factors as well as increased volatility and lower trading volume. Securities focusing on a single country may be subject to higher volatility. Greece’s ability to repay its sovereign debt is in question, and the possibility of default is not unlikely. GREK is non-diversified.