Mid-Year Review: Where the Asset Classes Stand in 2016

As we cross the halfway mark for 2016, many investors are taking stock of their portfolios’ performance and looking to identify opportunities to add to or scale back allocations to various investments.

In 6 months, the markets have experienced two bouts of extreme volatility, with the first occurring in January and February relating to the spillover effects of sub-$30 oil prices, and the second occurring in June as the markets reacted to the surprise Brexit vote. Read Global X’s Take on the Brexit

Despite these destabilizing events, most asset classes are up this year, with all but two of our identified asset classes delivering positive returns. Around the world, investments have generally benefited from dovish central bank policies as well as a strong rebound in commodity prices.

Within equities, emerging markets (EM) has been the best performing asset class as rising commodity prices stabilized the economies of commodity-export oriented countries. In addition, slower than expected interest rate increases have benefited emerging market companies that issue debt in USD, as it has helped weaken the dollar versus EM currencies.

Fixed Income has broadly performed well in 2016 despite fears at the end of 2015 of additional interest rate hikes in the US and high yield debt scares driven by low oil prices. Again, dovish interest rate policies and recovering commodity prices bolstered these investments as both duration and credit have delivered strong performances. In addition, the bouts of intense volatility in 2016 have driven many investors towards less risky assets, resulting in greater demand and therefore falling yields for treasuries.

Alternative investments have been among the best performing assets classes in the first half of the year as demand for store-of-value assets like gold and silver drove a recovery in precious metals. In addition, the lower for longer interest rate policies around the world helped bolster income producing alternatives like REITs and MLPs.

Below is a breakdown of the year to date total returns for a variety of benchmark indexes spanning multiple asset classes. 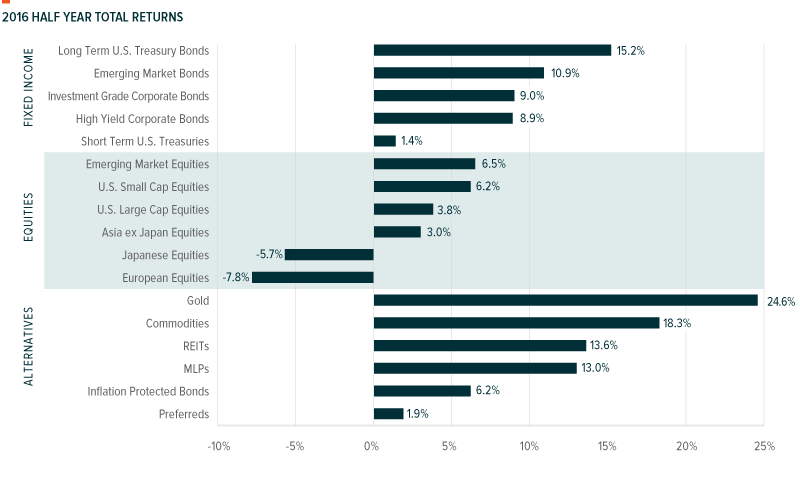 As mentioned, one of the key themes this year was the rise in global market volatility. Below is a comparison of the volatility in 2015 compared to the 2016 year to date annualized volatility. 13 of the 17 major asset classes have experienced higher volatility compared to 2015, despite mostly positive market performance. 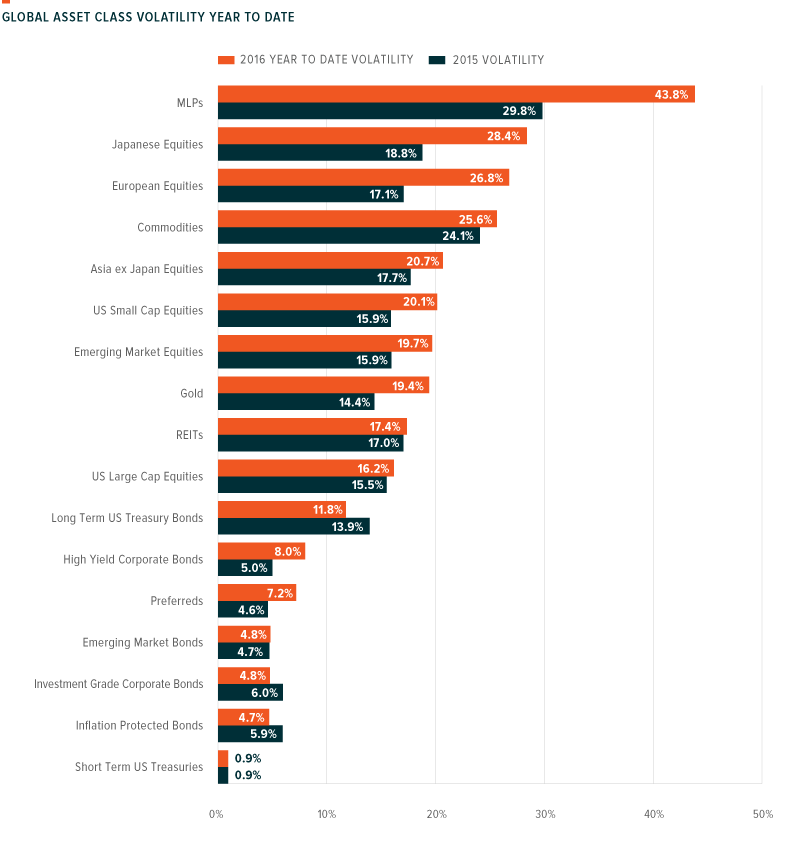 Looking forward, we believe increased volatility will remain the norm as markets react to central bank policies, Brexit negotiations, and political elections. In addition, growth will remain elusive as the global economy struggles with challenging demographics like slowing population growth and an aging population, as well as fully priced equity markets with many mature and highly competitive industries.

Given these broad themes, we believe investors would be well suited to allocate to:

Indices are unmanaged and do not include the effect of fees. One cannot invest directly in an index.

Investing involves risk, including the possible loss of principal. In addition to the normal risks associated with investing, international investments may involve risk of capital loss from unfavorable fluctuation in currency values, from differences in generally accepted accounting principles or from economic or political instability in other nations. Emerging markets involve heightened risks related to the same factors as well as increased volatility and lower trading volume. Narrowly focused investments and investments focusing on a single country may be subject to higher volatility. There are additional risks associated with investing in base and precious metals as well as their respective mining industries. Investments in smaller companies typically exhibit higher volatility.

Carefully consider the Funds’ investment objectives, risk factors, charges, and expenses before investing. This and additional information can be found in the Funds’ summary or full prospectus, which may be obtained by calling 1-888-GX-FUND-1 (1.888.493.8631), or by visiting www.globalxetfs.com.