Despite a difficult year for MLPs in 2017, December and January 2018 proved to be strong months for the asset class. We believe U.S. tax reform was the catalyst for this improving environment, which the market had not seriously considered until just before the bill was signed into law on December 22nd. In this quarter’s insights, we’ll seek to dig into the various areas in which this tax bill is expected to impact MLPs, including:

While the most notable change to the tax code is the reduction in the corporate tax rate from 35% to 21%, MLPs do not pay federal taxes as long as they are treated as a partnership. Therefore, this change in the tax code is expected to have little direct impact on MLPs. However, we believe there are two other relevant changes to the tax code that could affect MLPs more closely. First, the immediate expensing provision, also known as bonus depreciation, allows for businesses to immediately fully expense capital expenditure (CapEx) spending over the next five years. Previously, businesses were limited to depreciating 50% of an asset’s value in the first year. Given that MLPs are capital-intensive businesses, it’s possible this more aggressive depreciation schedule could spur additional spending on growth projects.

Second, the new tax bill also set out new rules on limitations for interest deductibility. Previously, interest payments on debt were fully deductible and unlimited. Under the new tax code, however, from 2018 to 2021, interest deductibility is limited to 30% of adjusted taxable income, which allows for depreciation & amortization to be added back into the calculation. After 2021, interest deductibility will be limited to 30% of adjusted taxable income, but depreciation & amortization are subtracted out. We think these new rules may cause MLPs to re-examine their capital structure. Debt has played an important role in funding MLP growth, but recent efforts to deleverage in the industry, combined with the new limitations on interest deductibility, may mean MLP management teams continue to lean more heavily on capital from other sources than debt, such as equity or retained cash flows.

For MLP unitholders directly investing in MLPs, their maximum individual income tax rate falls from 39.6% to 37%. In addition, there is now a 20% deduction on domestic MLP income, which by our calculations will lower the maximum effective tax rate on MLP unitholder income from 39.6% to 29.6%, as demonstrated in the chart below. This deduction does not have any wage-based limitations, unlike other partnerships such as those in financial services or consulting, among other fields.1 The 20% deduction on taxable income also applies to depreciation recapture upon the sale of MLP units.2 Based on the analysis below, we compare the new tax reform bill’s impact on MLPs to its impact on traditional C-Corps.  We believe that these various tax benefits for MLPs played an important role in driving strong unit performance following the passage of the tax reform bill, particularly given that many investors had low expectations heading into December. 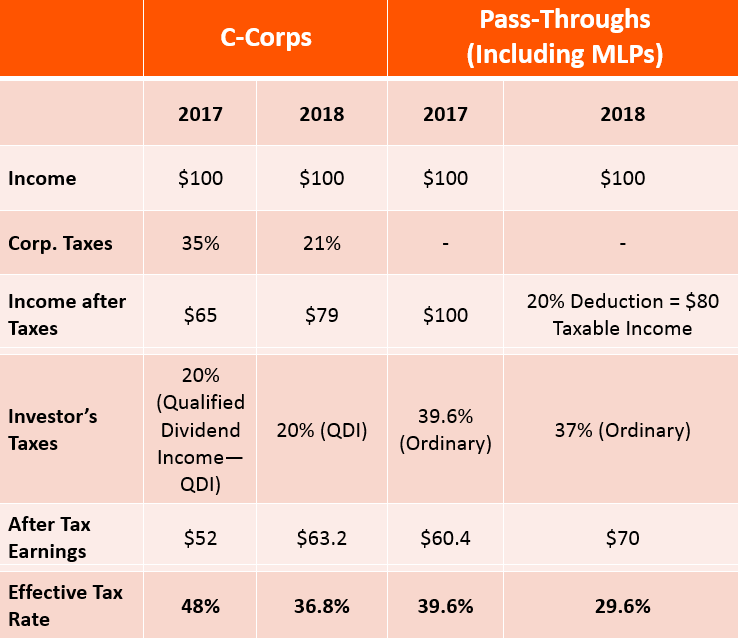 Hypothetical example. For illustrative purposes only.

For investors electing to gain MLP exposure by purchasing a C-Corp structured MLP fund, the tax bill has a positive impact given that it results in a lower effective tax rate for these funds. Take for example, the C-Corp structured Global X MLP ETF (MLPA), which in 2017 had an effective tax rate of 36.94%. Due to the now lower corporate tax rates, the effective tax rate on MLPA was reduced to 23.49% in 2018.  This means that in an MLP bull market where the fund is accruing a deferred tax liability, the ‘tax drag’ between the fund and the index is expected to be less severe than in previous years. This is demonstrated in the chart below. For more details on how a C-Corp structured MLP fund is affected by taxes in different market environments, please read our whitepaper.

Tax reform was largely beneficial to MLPs and their investors, but there are more complex questions about how tax reform might impact the MLP structure. Perhaps the most important question to the MLP industry is whether the lower corporate tax rate will cause management teams to explore converting their MLP to a traditional C-Corp. We’ve already seen one midstream C-Corp conversion announced this year with Archrock (APLP).3 Other MLP management teams have indicated that they will explore the possibility of a C-Corp conversion. There are a number of factors to consider, but cost and access to capital, investor demands, and relative valuations are likely to be top of mind in the decision making process. In our view, if a few pioneering MLPs convert to the C-Corp structure and experience positive market reactions, including valuation expansion and/or improving credit outlook, we could see a broader trend form in the industry.

The tax reform bill has a variety of implications for MLPs and their investors, many of which we believe will be positives for the asset class over time. While investors can immediately enjoy the benefits of lower effective tax rates, over the longer term, the spotlight will be on MLP management teams and how effectively they incorporate the tax law changes into their firm’s overall strategies in order to maximize unitholder returns. We expect tax reform to have a wide-reaching impact on the management of MLPs, affecting decision making on corporate structure, capital expenditures, and sources of financing. Further upping the ante, we believe these decisions will be occurring at a critical time for the industry, as investor confidence in the asset class has sagged, while US energy output reaches record highs and has continued to grow at a torrid pace. If addressed properly, we believe the tax reform could serve as a much needed long term catalyst for the industry, spurring increased growth expectations, higher valuations, and more stable balance sheets.

3. As of 3/6/18, Global X does not have any funds holding ArchRock Partners (APLP). Holdings are subject to change.

The information presented here is for informational purposes only. It was prepared on information and sources that we believe to be reliable, but we make no representations or guarantees as to the accuracy or the completeness of the information contained herein. This information is not intended to be individual or personalized investment or tax advice. Please consult a financial advisor or tax professional for more information regarding your tax situation.

Investing involves risk, including the possible loss of principal. International investments may involve risk of capital loss from unfavorable fluctuation in currency values, from differences in generally accepted accounting principles, or from economic or political instability in other nations. Investments in securities of MLPs involve risk that differ from investments in common stock including risks related to limited control and limited rights to vote on matters affecting the MLP. MLP common units and other equity securities can be affected by macro-economic and other factors affecting the stock market in general, expectations of interest rates, investor sentiment towards MLPs or the energy sector, changes in a particular issuer’s financial condition, or unfavorable or unanticipated poor performance of a particular issuer (in the case of MLPs, generally measured in terms of distributable cash flow). MLPA invests in the energy industry, which entails significant risk and volatility. The fund invests in small and mid-capitalization companies, which pose greater risks than large companies. The fund is non-diversified.

The Fund has a different and more complex tax structure than traditional ETFs and investors should carefully consider the significant tax implications of an investment.

Carefully consider the Fund’s investment objectives, risks, and charges and expenses before investing. This and additional information can be found in the Fund’s summary and full prospectuses, which may be obtained by calling 1-888-GX-FUND-1 (1.888.493.8631), or by visiting www.globalxetfs.com. Please read the prospectus carefully before investing.