It has been a challenging month and a half for MLP unit-holders, with the asset class down -8% since the end of Q2.1 While oil prices have to some extent weighed on MLPs, in our opinion they do not fully explain the asset class’s performance. In this quarter’s MLP Insights piece, we dig into some of the other underlying performance drivers and indicators within the MLP space, including:

MLP units are down -11.45% year to date, while high yield midstream credit (high yield bonds issued by MLPs, General Partners of MLPs, or energy infrastructure corporations) is up 5.48%. High yield midstream credit performance is nearly in-line with the broader high yield debt space and has outperformed the broad high yield energy credit segment. Credit spreads within the midstream space have remained stable, indicating that the market believes their business models remain on solid footing and default risk among these entities is unchanged this year based on the stabilization of credit spreads. 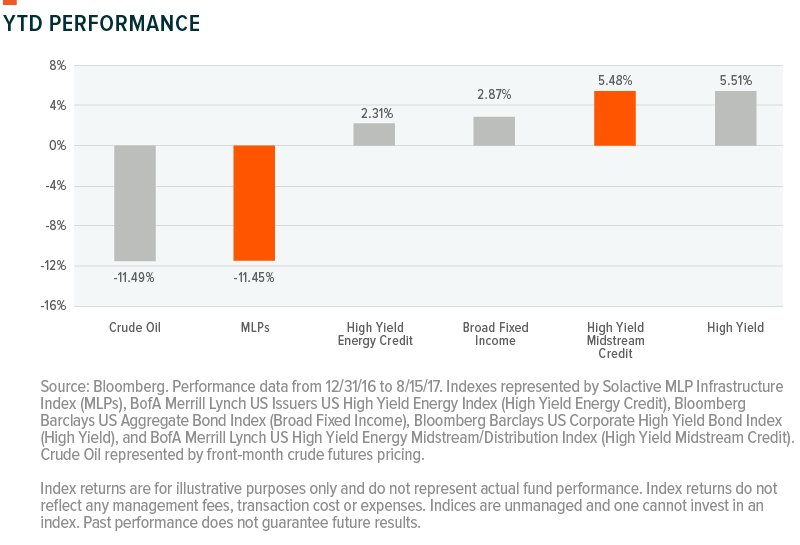 Given this positive backdrop for high yield midstream credit, it’s surprising to see MLP units selling off and diverging from credit by nearly 17%. Yet valuations of MLP units differ from the credit side in that they not only consider current business conditions and the stability of cash flows (key indicators for default risk), but also largely factor in future growth expectations. Therefore, we believe the recent underperformance in MLP units is not due to perceptions of declining business stability, but rather reduced near-term growth expectations. 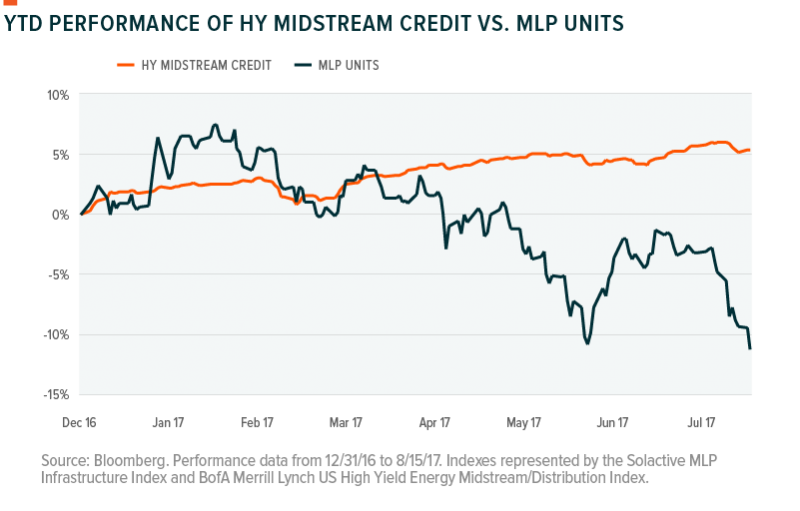 One potential reason for falling near-term growth expectations could be the recent reductions in CapEx from exploration and production (E&P) firms. In July, Anadarko Petroleum surprised the market by cutting their 2017 CapEx budget by $300 million, becoming the first US producer do so this year.2 This started a snowball effect, with eight other upstream producers cutting CapEx budgets for 2017 and/or 2018. Over a 16 day span, US E&P CapEx budgets were slashed by nearly $1.4 billion. 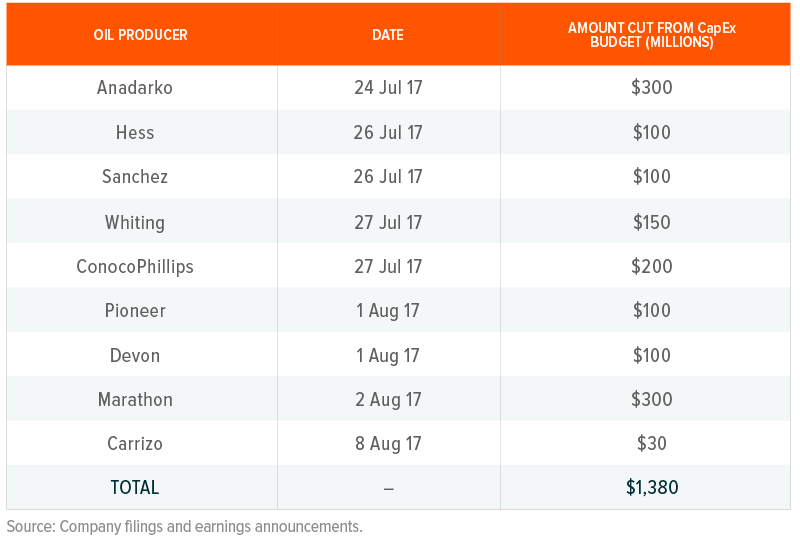 E&P CapEx can be a leading indicator for oil drilling activity, meaning the cuts could lead to slowing oil production growth in the US­­‑‑ a positive for oversupplied oil, but a negative for midstream MLPs that benefit from greater production levels. The markets responded to these CapEx cuts by pushing up oil prices by 3%, while MLPs sold off 9% from July 24th and August 15th.3 We believe the E&P CapEx reductions caused the market to reconsider US crude production growth for late 2017/early 2018, which in turn forced investors to lower their expectations for near-term volume growth flowing through MLP midstream systems.

Earnings also played a hand in MLP weakness this quarter, but we believe there are reasons to be optimistic. Adjusted EBITDA (Earnings before Interest, Taxes, Depreciation, & Amortization), softened on average -3.0% this quarter, with results skewed by weak results from a few select MLPs like Energy Transfer Partners and Plains All American.4 Versus Q2 2016 figures, raw adjusted EBITDA has risen by 13.7%. As depicted in the chart below, MLP revenues continued their year-long trend of steady improvement, benefiting from rising domestic crude volumes that require transportation and storage. In addition, profit margins expanded to their highest levels since September 2016. 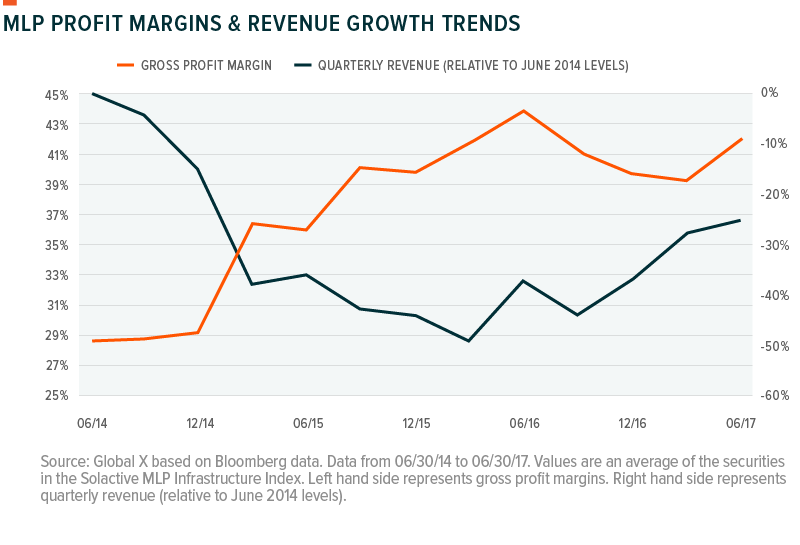 The more intriguing aspect of this MLP earnings season was the increase in CapEx spending, indicating an increased focus on long term growth. As shown in the chart below, MLPs accelerated their buildout of infrastructure assets, preparing for higher levels of shale production over the long term. While this may appear to stand in conflict with the CapEx cuts from the E&P space, it’s important to consider the varying timelines of the two segments. E&P CapEX spending tends to be more near-term focused as drilling activity can impact oil production in just a few months, while midstream MLP CapEx can be a decades-long investment. While the current dynamics of the oil market may be forcing E&P companies to reconsider near-term production levels, longer term trends are showing that takeaway capacity across US energy infrastructure platforms is moving closer and closer to full utilization, creating the need for additional spending on energy infrastructure to manage expected production levels. 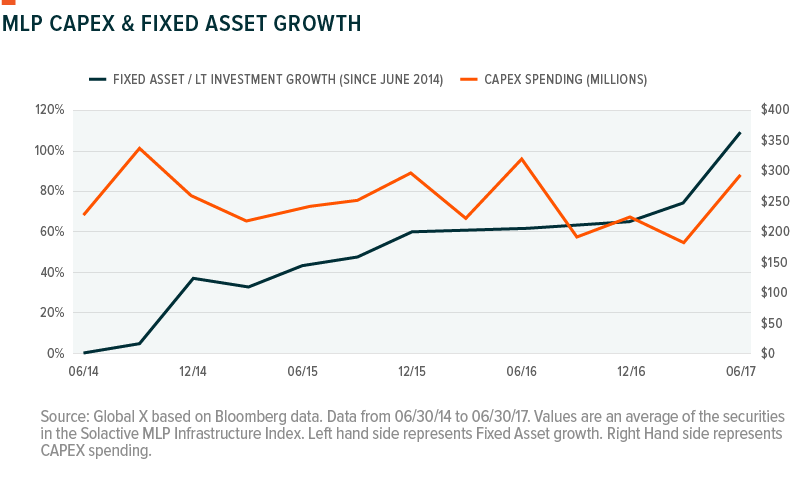 The strong returns for high yield midstream credit so far this year indicates that the market believes core energy infrastructure business conditions are on solid footing. The selloff in MLP units, however, is likely due to a mixed bag earnings season and lower near-term growth expectations caused by the recent cuts from E&P companies in CapEx. The acceleration in CapEx spending among MLPs demonstrates a longer term commitment to growth that could benefit patient investors.

4. Company filings. Average of the securities in the Solactive MLP Infrastructure Index calculated by Global X.

Adjusted EBITDA: Adjusted Earnings before interest, tax, depreciation and amortization (EBITDA) is a measure of a company’s operating performance while removing the effects of infrequent events, such as impairments or legal charges. Essentially, it’s a way to evaluate a company’s performance without having to factor in financing decisions, accounting decisions, tax environments, or unusual events.

Investing involves risk, including the possible loss of principal. International investments may involve risk of capital loss from unfavorable fluctuation in currency values, from differences in generally accepted accounting principles, or from economic or political instability in other nations. Investments in securities of MLPs involve risk that differ from investments in common stock including risks related to limited control and limited rights to vote on matters affecting the MLP. MLP common units and other equity securities can be affected by macro-economic and other factors affecting the stock market in general, expectations of interest rates, investor sentiment towards MLPs or the energy sector, changes in a particular issuer’s financial condition, or unfavorable or unanticipated poor performance of a particular issuer (in the case of MLPs, generally measured in terms of distributable cash flow). The MLP funds invest in the energy industry, which entails significant risk and volatility. The funds invest in small and mid-capitalization companies, which pose greater risks than large companies. The funds are non-diversified.

The Funds have a different and more complex tax structure than traditional ETFs and investors should carefully consider the significant tax implications of an investment.

The amount of cash that MLPX will have available to pay or distribute to you depends entirely on the ability of the MLPs that the Fund owns to make distributions to their partners and the tax character of those distributions.