MLPs have regained some of their footing in the second half of the year as fears surrounding the uncertainty of the MLP structure have been replaced with more optimism around high pipeline utilizations rates and low valuations. While questions around the MLP structure remain relevant, answers to some of the more critical questions have started to be addressed, allowing a clearer picture to emerge of the changing energy infrastructure landscape. In this quarter’s MLP Insights, we will address a few topics that are top of mind for MLP and energy infrastructure investors, including:

As discussed in last quarter’s insights, C-Corp conversions in the MLP space are on the rise and we believe this trend is likely to continue. Since then, no other major C-Corp conversions have occurred, but multiple IPO’s have been announced for midstream assets that are electing to go the C-Corp route. Last month, Diamondback Energy announced an IPO for their midstream entity, Rattler Midstream Partners. While technically structured as an MLP, they are electing to have this entity be taxed as a C-Corp. Shortly after the Rattler IPO filing, Apache Corp and Kayne Anderson Acquisition Corp announced they are creating a C-Corp entity for Apache’s midstream assets, named Altus Midstream.

In summarizing the reasoning behind the use of the C-Corp structure, Kevin McCarthy, an executive at Kayne Anderson stated, “MLPs are no longer getting a premium valuation compared to C-Corps. There’s been a lot of C-Corp conversions in the space. And we think for this type of asset, the market will place a premium on something that’s a C-Corp rather than something that’s paying out all this cash flow and having to come to the market to fund growth.” In other words, the MLP tax structure is no longer favored in today’s dynamic environment, with preference being given to the more flexible and accessible C-Corp structure. Given the uncertainty that has plagued MLPs over the past few years and how much the business model has changed in such a short period of time, it’s difficult to argue against that thinking.

Another prominent M&A move this quarter was Energy Transfer Equity’s (ETE) decision to simplify its partnership structure by rolling up its Limited Partner and General Partner into one publicly traded MLP. The roll-up is likely to have implications across the board for MLP investors as the combined entity is expected to be one of the largest in the space. While Energy Transfer elected to maintain their partnership tax status, they noted that they are open to a possible C-Corp conversion in the future for the combined entity. If a conversion were to be executed, it would likely be one of the largest C-Corp conversions ever, possibly even larger than Kinder Morgan’s.

Implications of the finalized FERC ruling

On July 18th, FERC released a clarification to their March ruling on MLP income tax allowance (ITA) recovery, alleviating many initial concerns. Most importantly, this release addressed: 1) the treatment of Accumulated Deferred Income Tax (ADIT) account balances; and 2) how MLPs with C-Corp parents are affected by the new rules. Regarding ADIT, investors originally feared that MLPs might have to refund deferred tax accounts back to their customers since the ITA recovery was being removed. FERC has now clarified that if an MLP elects to remove its ITA, ADIT balances do not need to be refunded. The second question addressed speculation that MLPs could claim relief if they have a C-Corp parent company that is subject to paying taxes. FERC clarified that MLPs with C-Corp parents that fully consolidate both entities’ financials can recover the ITA. While this is largely a positive for eligible MLPs, there will still need to be an adjustment to ITA calculations given that the corporate tax rate was lowered from 35% to 21%, meaning the ITA recovery would be lower than it was under the old tax code. Even C-Corps without MLPs will need to institute this adjustment as well.

Overall, the FERC’s recent clarifications walked back parts of the initial ruling from March and is widely viewed as a positive update. Yet while this walk back is directionally positive, the original ruling in March set into motion significant ramifications that cannot easily be unwound. For example, a handful of MLPs heavily affected by the original ruling already announced intentions to roll-up with their C-Corp parent, unwilling to take a chance to see how the final rule would play out. Yet it’s important to remember that most MLPs are not directly affected by the FERC ruling: while it has had a negative impact on the broader asset class, only a select group of MLPs with regulated cost-of-service pipelines are expected to be impacted.

While much of the recent discussion around MLPs has focused on structural and regulatory questions, we believe it’s important not to lose sight of the industry trends occurring at the operating level of these businesses. On that front, one of the most significant trends in energy infrastructure this year is strained pipeline systems due to record high oil and natural gas output. Spare pipeline capacity is difficult for some producers to come across and in some areas, like the Permian Basin, pipe capacity is nearly maxed out. In the chart below, we show how oil price differentials have widened considerably between the Permian Basin and its Houston Gulf Coast counterpart. Because there isn’t enough pipe capacity in the Permian, producers are forced to sell the commodity at an increasing discount compared to areas with spare capacity in place. 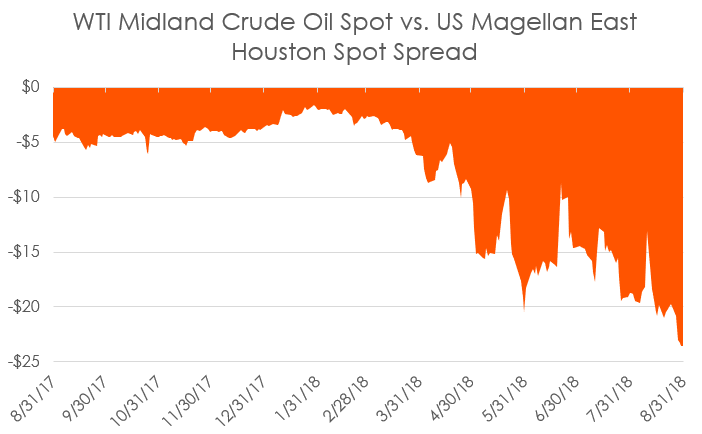 Similarly, the chart below shows that natural gas prices in the region are not immune to infrastructure capacity issues either as gas production in that region has ramped up as well. 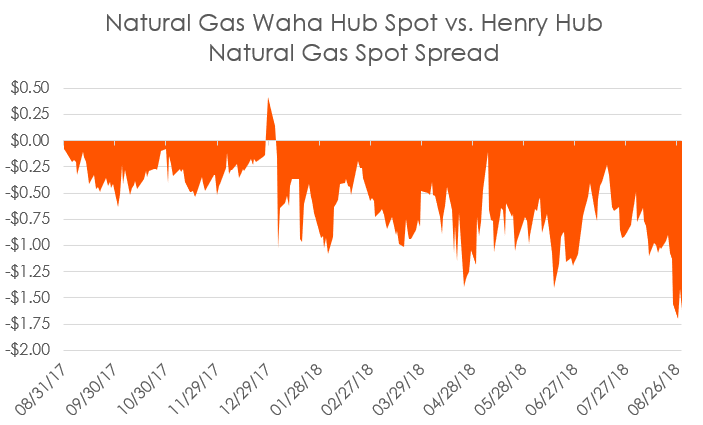 While the capacity constraints in the Permian are the most acute, infrastructure capacity concerns are present across the country. Insufficient capacity can have near-term and long-term impacts on the industry. In the short-term, while fully capacity is great for generating current cash flows, there are some worries that upstream producers could dial back production growth to account for the inability to transport oil and gas to their end destination. Long-term, these capacity issues mean midstream providers have substantial opportunities to introduce additional or expanded pipeline projects. In the list below, we aggregated the notable new pipeline projects expected in the Permian Basin as energy infrastructure firms look to capitalize on the growth of energy output.

Source: RBN Energy, S&P Global, Global X Research, Company Announcements. All capacity and estimated operational dates are estimates and subject to change. Projects may be subject to potential cancellation in the future.

Uncertainty is inevitable in a changing landscape with new taxes, regulations, and business models. Fortunately, clarifications around the FERC ruling, the implications of recent C-Corp IPOs, and the continued analysis of the C-Corp structure by existing MLPs are helpful steps for developing a more defined picture of the future of the energy infrastructure landscape. While questions around the MLP and C-Corp structures will remain for the foreseeable future, it is important to remember that regardless of structure, the underlying assets for these businesses remain the same. Hopefully as investors feel more comfortable with this direction of the energy infrastructure industry, these assets will be assessed more from their fundamental strengths as opposed to the corporate structure uncertainties that have plagued the space over the past couple years. From that angle, the record high energy outputs, little spare capacity, and future pipeline expansions, demonstrate positive trends for the industry.