The energy sector has become increasingly segmented as the low oil price environment has disproportionately challenged certain parts of the energy value chain, while leaving others relatively intact. In the analysis below, we examine the relative consistency of the midstream MLP space compared to the broader energy space, and discuss potential MLP growth opportunities.

Headline news tends to paint the energy sector with broad brushstrokes, particularly as oil prices have plummeted since Q3 2014. But not all segments of the energy sector have fared the same in this challenging environment. Of the six energy sub-sectors, five have reported year-over-year earnings declines ranging from -85% to -41%. Oil & Gas Storage and Transportation stands alone reporting an increase in earnings, with profits up 8% since Q3 2015.1  It is a similar story for revenues, which are up 3% over this time period for Oil and Gas Storage and Transportation, while the other five sub-sectors have reported declines ranging from -43% to -13%.1 Oil & Gas Storage and Transportation companies are similar to midstream MLPs in terms of business operations, but differ in legal structure, with MLPs structured as limited partnerships while traditional companies are structured as C-Corporations. They traditionally benefit from the same drivers as midstream MLPs, which is consistent transportation or storage volumes of crude oil or natural gas.

As expected, midstream MLPs have fared similarly to the storage and transportation sub-sector, with adjusted earnings before interest, taxes, depreciation and amortization (Adjusted EBITDA – a preferable metric to proxy earnings for MLPs) being essentially flat year-over-year.2 For an apples-to-apples comparison, the broader energy sector has experienced a -22% decline in adjusted EBITDA over the same time frame.3

Given this backdrop of consistency, many midstream MLPs have been emboldened to continue to increase their distributions. Among this group, year-over-year distributions have increased on average by 5%, with only one major midstream MLP cutting its distribution since mid-2014. By contrast, dividend growth in the broader energy sector has fallen -19% over the same period.2

Digging a layer deeper, a key indicator of the health of the midstream MLP space is their actual storage and transportation volume data, or how much of the commodity is really moving through these infrastructure assets. Despite oil touching $26/barrel in and natural gas bottoming at $1.64/MMBtu in Q1 2016, year-over-year volumes have declined only -1% on average among the midstream MLP space.4,5 It is important to note, however, that among individual MLPs there has been a dispersion in volume changes as some have seen volumes fall as much as -15%, while others increased their volumes by up to 11%.4 We believe this illustrates the need to invest in a diversified basket of midstream MLPs rather than over-exposing oneself to the idiosyncratic risk associated with individual MLPs. 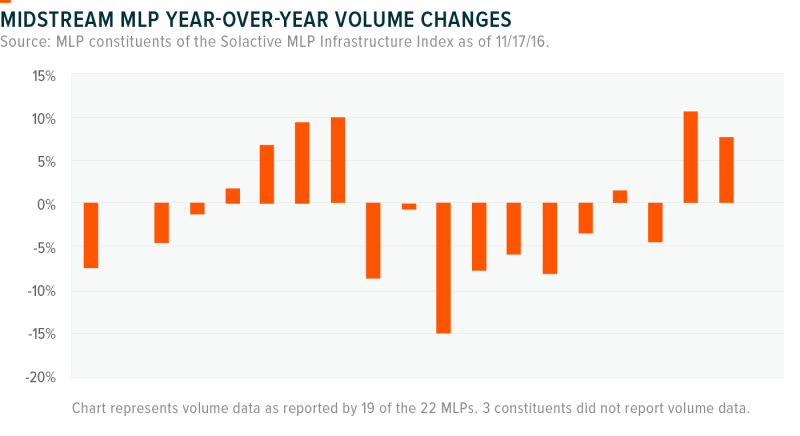 The recent election has brought a renewed focus on infrastructure investment from both sides of the aisle, as Trump and Clinton both supported infrastructure packages worth hundreds of billions of dollars. Policy changes and fiscal spending packages can be notoriously difficult to predict, but to the extent Washington can pass legislature to support infrastructure growth, midstream MLPs could be a key beneficiary. One reason to be optimistic is that energy independence policies often garner bipartisan support given their potential to create additional jobs and reduce the country’s reliance on foreign powers. In order to grow US energy production and continue on the path to energy independence, the build-out of new energy infrastructure will be a critical step and therefore could be the focus of any infrastructure proposals. In addition, Trump’s infrastructure proposals are heavily dependent on spurring private investment and reducing regulatory hurdles. These two aspects play well into the hands of midstream MLPs and energy infrastructure corporations as many have delayed billions in growth capital expenditure projects which could return to action if the cost of funding the projects drop through either new government incentives or lower regulatory hurdles.