Q2 Overview: Where are We Now?

Yes, X marks the spot. But only when you have a good map. The era of easy money fueled by central bank intervention has investors searching for clues about where the market is in this protracted cycle and whether the water we are seeing—the Dow Jones Industrial Average Index is up 1200 points since its 2018 intraday low on May 3—is this an oasis or a mirage. The natural question everyone is asking is, Where are we now? It’s a good question.

A Host of Factors have Contributed to Market Uncertainty

First, it’s important to remind investors that investing hasn’t changed. The numbers behind this cycle are reminiscent of others. The same factors still drive and flummox the market, from the economic, to the geopolitical, to the random tweet. Different are the details about the storyline.

Looming over everything is that the last decade has been extraordinary, marked by (very) easy monetary policy designed to stimulate consumption. Factor in an equities market that rocketed higher (and higher) in 2017 and it was only a matter of time before volatility crept back up, knocked the market down from its perch, and left investors trying to figure out what’s next. Taken together, the following haven’t exactly helped in mapping out the market’s path: 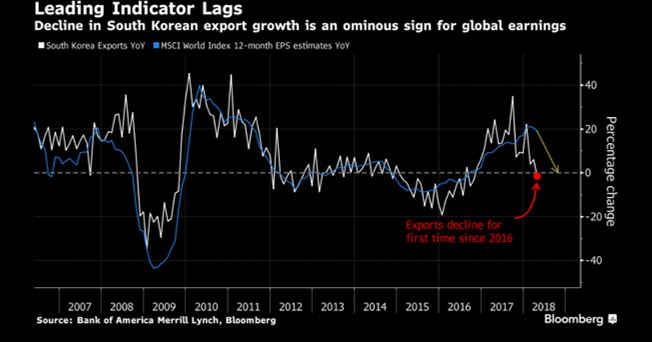 Something to Note about Economic Cycles and Capex

This economic cycle will end at some point. History tells us that much. But this one appears to be marching to the beat of its own drummer. And maybe that’s a byproduct of the still-to-be-defined post-financial crisis normal.

US and international markets have lacked direction on year-to-date and quarter-to-date bases. The S&P 500 Index has returned +2.7% qtd and +1.9% ytd. The MSCI World ex USA Index and MSCI Emerging Markets Index has returned +4.0% and 0.0% qtd, respectively, and +1.9% and +1.4% ytd. Performance in Europe has improved, led by the United Kingdom and core Eurozone countries. Conversely, risk-off sentiment, trade uncertainty and the strengthening US dollar has hurt Emerging Markets, though Emerging Asia has held up relatively well.

YTD disruptive technologies have experienced strong returns beyond the broad strength in Information Technology. Particularly strong disruption has occurred in Industrials, where robotics and artificial intelligence made further headway in automating manufacturing processes. FinTech had a similar impact on the Financial sector, as people leverage new technologies to manage their financial affairs.

S&P 500 Information Technology at +11.3% ytd led all sectors, followed by the S&P 500 Energy’s +7.8% and S&P 500 Consumer Discretionary’s +6.9%. In Q2, Energy has dominated with a +14.5% return amid the roughly 13% rise in WTI prices to more than $70 per barrel. It is still to be seen how energy prices will react following the Trump administration’s announcement that the U.S. is exiting the Iran nuclear deal.

Historically, when there has been trade conflict and rising geopolitical tensions, domestic-facing U.S. stocks have tended to outperform. The small cap Russell 2000 Index has returned +4.7% qtd and ytd, while the Russell 1000 Index returned +3.6% and +2.8% qtd and ytd, respectively. From a size and style perspective, qtd the Russell 2000 Value Index was the top performing area with a +5.1% return, followed by the Russell 1000 Growth Index at +4.6%.

We got a puppy. Like most puppies, Teddie has brought a lot of energy and life to her new home. And as a proud dog dad, I have to say that Teddie’s a pretty bright little pooch. Is she housebroken yet? Not quite. But I’m encouraged that she gets the concept, even if the execution isn’t all the way there.

Teddie’s hits and misses are similar to trying to track this market. The forces of nature call, yet there are some plot twists that have yet to be fully understood, like when Teddie met our new rug for the first time. While looking at one-offs can be informative, the market is a never-ending story to be judged in larger blocks of time. And it’s possible that events of the last decade have skewed the typical timeline.

What we care about is our thought process and making sure that we’re looking at the right triggers to determine how to proceed. And it’s not much different than that old investing adage—adding layers of diversification (and maybe one of those doggie pads on the rug) can help mitigate some of the uncertainty that is all part of investing.

Dow Jones Industrial Average Index: Is a price-weighted measure of 30 U.S. blue-chip stocks that are generally the leaders in their industry. It has been a widely followed indicator of the stock market since October 1, 1928. The index covers all industries except transportation and utilities.

Russell 1000 Total Return Index: Consists of the largest 1000 companies in the Russell 3000 Index. This index represents the universe of large capitalization stocks from which most active money managers typically select.

Investing involves risk, including possible loss of principal. Diversification does not ensure a profit or guarantee against a loss. Narrowly focused investments typically exhibit higher volatility. International investments may involve risk of capital loss from unfavorable fluctuation in currency values, from differences in generally accepted accounting principles or from social, economic or political instability in other nations.

Carefully consider the funds’ investment objectives, risk factors, charges, and expenses before investing. This and additional information can be found in the funds’ summary or full prospectus, which may be obtained by calling 1-888-GX-FUND-1 (1.888.493.8631) or by visiting globalxfunds.com. Please read the prospectus carefully before investing.