Trade war talk, sparked by the U.S. announcing tariffs on steel and aluminum imports, continues to ratchet higher and higher. Contentious negotiations between the U.S. and China, as well as America’s two largest trade partners, Canada and Mexico, has many investors wondering what this means for the markets. Initially the market has interpreted the political rhetoric as mere bluffs, rather than as structural concerns. Though after the G-7 summit, the current US Administration continues to throw rhetoric at its allies. And the more recent search by this administration to find more Chinese goods to impose tariffs on, has rattled markets. In this piece, we take a look at the trade war song and dance and the potential implications.

What is the rationale for tariffs?

The gist of the Trump administration pressuring the U.S.’ main trade partners goes something like this: The U.S. gives up too much at the expense of U.S. exporters and the result has been significant trade deficits that eliminate American jobs.

There may be some truth to that line of thinking on certain micro levels, but it doesn’t necessarily paint an accurate picture of the broader economy. For example, the annual U.S. trade deficit for goods and services rose from $384 billion to $568 billion from 2009 to 2017.1 Over that same period, private U.S. payroll jobs jumped by 15.5 million and the unemployment rate fell from 9.3% to 4.4%.1

If trade deficits and job losses went hand-in-hand, these labor market moves would seem to be impossible. Also, trade protection measures would not necessarily lead to a reduction in the trade deficit, in part because rising prices would likely lead to a decrease in quantities. Further, trade patterns would likely adjust to find ways around the levies, similar to what happened during the 1980s trade conflict between the U.S. and Japan.

That is not to say that there aren’t issues with some of the U.S.’ trade pacts amid the new global economic norms driven by technology. But the notion that the nation’s economic problems are a direct result of existing trade agreements appears to be a leap. For that reason, the recent escalation in trade war talk seems to be more about politics than economics. 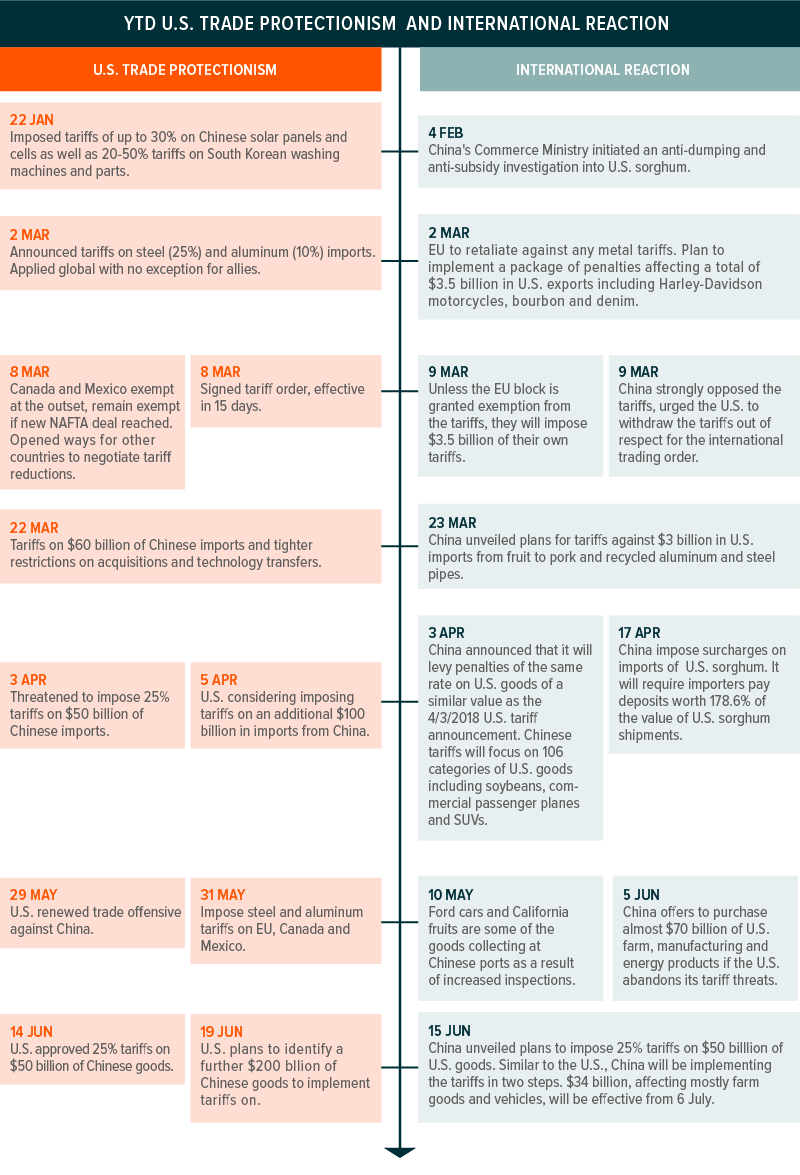 In January, the Trump administration got the tariff ball rolling with up to 30% levies on Chinese solar panels and cells.2 But that was only a warm up. The March announcement of a 25% tariff on steel and a 10% tariff on aluminum imports got the world’s attention, given that taxes on commodities as ubiquitous as these would cause the prices of virtually everything in their path to rise, from soda cans to new homes.3

Neither China nor the European Union sat idly. The E.U. said that it would retaliate against any metal tariffs and put together a package of penalties affecting a total of $3.5 billion in U.S. exports, including iconic American staples like Harley-Davidson motorcycles and bourbon. The astute noted that, not so coincidentally, Harley-Davidson is based in House Speaker Paul Ryan’s home state of Wisconsin and bourbon is the pride of Senate Majority Leader Mitch McConnell’s Kentucky.4

That gets at the bluster that’s been bandied about so far this year. The pattern seems to be the U.S. threatens tariffs, and at various points the E.U., Canada, or China counterpunch. The next round of significance came on June 14, when the U.S. approved tariffs on roughly $50 billion of Chinese imports that will be implemented in two steps with the first $34 billion coming into effect on July 6.5 And now this administration is looking for other Chinese goods to tax, which is rattling markets.

Would a trade war today resemble the one from the 1980s?

The U.S. has been down the protectionist road before, and while parallels can be drawn between Japan and China, the dynamics are quite different.

Japan has been a close ally of the U.S. since the end of World War II. Its political and economic systems are similar to those in the U.S. Also, Japan is a U.S. protectorate, reliant on the U.S. for security. So even when at odds with the U.S., Japan has more reasons to go along with U.S. demands and pressure.

China has less to lose in a trade war. Its economic growth relies less on exports than Japan’s did in the ’80s. For the Trump administration, that makes it more difficult to compel China to adjust its views on trade. And Beijing does not appear to be a pushover, continually pushing back on the U.S. rhetoric. In the ’80s, Tokyo didn’t have that luxury.

Also, unlike corporate Japan of the ’80s, Chinese companies rarely go head-to-head against their U.S. counterparts. In fact, corporate America would seem to have much more to lose from a trade war with Chinese supply chains helping to make it the U.S.’ third largest export destination, behind Mexico and Canada.

How is the market responding to all this talk of a trade war?

Up until the last week, the talk of a trade war hasn’t meant much, giving the bulls reason for optimism. But with less negotiating and more threats occurring by this U.S. administration, perhaps we are at the dawn of a trade war.

As the tariff rhetoric builds, there is the growing potential to impact sentiment and market expectations. Firms are questioning their capital expenditure spending as we speak. One of the main purposes of the tax cuts was to increase spending at both a corporate and individual level; however, a trade war has the real potential to negate those benefits. This could negatively impact global growth and momentum.

Globalization has altered the way that business is conducted. This has resulted in U.S. companies having global supply chains that could potentially be harmed by U.S. tariffs and global retaliation. Tariffs intended to help one industry may end up hurting multiple other industries due to tariffs on imported inputs into production processes. Additionally, as China only imported $130 billion of U.S. goods during 2017, it has less trade volumes to potentially issue tariffs on and consequently may retaliate against the operations of U.S. corporates located within China.6 This has the potential to change the landscape of the trade war in a way that has not yet been experienced.

Prior to the G-7 summit, markets had been reasonably subdued about tariff concerns. The S&P 500 Index posted about a 2.4% gain, its best May since 2009 and in June (through June 18th), the S&P 500 Index gained 2.6%. But the Russell 2000 Index has starred recently. The domestically oriented small-cap index bested the S&P 500 Index for a third straight month.7 Reasons for the surge could be attributed to the strengthening U.S. dollar in recent months. Small cap companies are generally less reliant on foreign revenue than their large-cap, multinational peers, and thus less exposed to such forces as, say, trade policy machinations.

For more good news, recent data suggest something other than a late-cycle bull market. Revisions to analysts’ estimates for publicly traded American companies indicated “unusually robust strength in U.S. fundamentals,” according to one recent report.8 Also boding well is that the three-month earnings revision ratio expanded for stocks with pure domestic sales last month, but moderated for multinationals. The scale of upward revisions would seem to set up U.S.-centric equities well for the near term.

A full-blown trade war would likely dent the U.S. economy in the long run, but not necessarily in the short-to-intermediate term. It would take time for price increases to have a structural effect on demand. Notably, though, the specter of its potential effects could be a lingering headwind.

The exporters in the crosshairs of the Trump administration’s barbs would seem to be more affected in the short term. One factor not to underestimate is the dollar’s recent surge amid the administration declining to entertain the idea of trade rebalancing through a weaker USD. The cost of doing business in USD has risen meaningfully for foreign entities, emerging markets in particular.

Now, it would be one thing if the risk of a trade war was the only issue to account for, but it’s not. Among others, a take-your-pick of geopolitical and economic events could all conspire with trade policy to upend markets, including Italy’s debt problems and its potential outsize impact on the global financial system, the Federal Reserve continuing to raise interest rates and reduce its balance sheet, the European Central Bank tapering its quantitative easing program, or global growth showing signs of slowing.

When speaking about a trade war, Apple CEO Tim Cook put it like this: “No one will win. It will be lose-lose.”12 Not lost on me when I saw that while researching this piece, with a few tunes cranking through my smart phone was that somewhere buried (very) deep in my playlist are some rather prescient words about uncertainty from the year that was my 1982.

It’s easy to get lost amid all the bluster and figure out what means what. And let’s face it, trade war talk gives headline writers plenty of fodder to ramp up anxieties. But not to be forgotten according to J.P. Morgan Chase CEO, Jamie Dimon, is that there’s much more to the story than the barbs and quips. One of the many layers is the economic impact. Dimon has noted the strength in the economy and that the recovery could continue. However, “one of the flies in the ointments is this trade stuff.” It not only affects decision-making, he says, “it also increases uncertainty and uncertainty is not a friend of the economy.”13

To this point, and to its credit, the U.S. market has largely looked past that uncertainty and honed in on the structural factors backing the economy though global markets are getting nervous. Still solid fundamentals and expectations for earnings growth have lent credibility to a bull that doesn’t seem to want to quit. But as English band Asia, the noted wordsmiths that they were, once told 12-year-old me (repeatedly) through my Walkman, only time will tell.

10. Real Earnings Summary, The Bureau of Labor Statistics, 10 May 2018. https://www.bls.gov/news.release/realer.nr0.htm

13. Domm, Patti. “Jamie Dimon: Trump’s trade policy is a fly in the ointment that could end the economic recovery,” CNBC, 5 June 2018. https://www.cnbc.com/2018/06/05/jamie-dimon-trumps-trade-policy-is-a-fly-in-the-ointment-that-could-end-the-economic-recovery.html

Investing involves risk, including possible loss of principal. International investments may involve risk of capital loss from unfavorable fluctuation in currency values, from differences in generally accepted accounting principles or from social, economic or political instability in other nations. Emerging markets involve heightened risks related to the same factors as well as increased volatility and lower trading volume.