On Facebook’s Q2 2021 earnings call, CEO Mark Zuckerberg and others mentioned the metaverse 20 different times. Roblox mentioned the metaverse 16 times on its call and Unity Technologies did so 8 times. Why are leading social media and video game companies so enamored with this term? It’s because many expect the metaverse to emerge as the next evolution of the internet, presenting trillions of dollars of opportunities, as well as risks, to today’s leading platforms and internet giants.

But what is the metaverse and why is it the likely successor to today’s internet? And which themes and segments are best positioned to benefit from this evolution? We’ll discuss these questions in this piece as we explore the metaverse and envision how it could drastically reshape the future.

In today’s internet, we often access different digital platforms because they help facilitate physical-world experiences. We buy goods on Amazon that are shipped to our home, we share pictures on Instagram of our latest dinner out, or we buy tickets online to a concert at Madison Square Garden that we attend with friends.

In the metaverse, digital platforms will contribute largely to digital-world experiences. By jumping into an immersive experience using a virtual reality headset, one can work, play video games, buy digital items, socialize with friends, and consume media, all while present within the metaverse itself. Succinctly, Facebook’s Zuckerberg describes the metaverse as a virtual environment where you can be present with other people in digital spaces.

Broadly, we identify six main characteristics that define a metaverse:

Early Days of the Metaverse Show Its Potential

The metaverse is not some futuristic idea; early versions already exist. Epic Games’ Fortnite has hosted virtual concerts with Ariana Grande and Travis Scott, where users attended as their digital avatars to enjoy the shared experience with others. The success of these events has been staggering, drawing millions of fans that far outnumbered in-person shows. 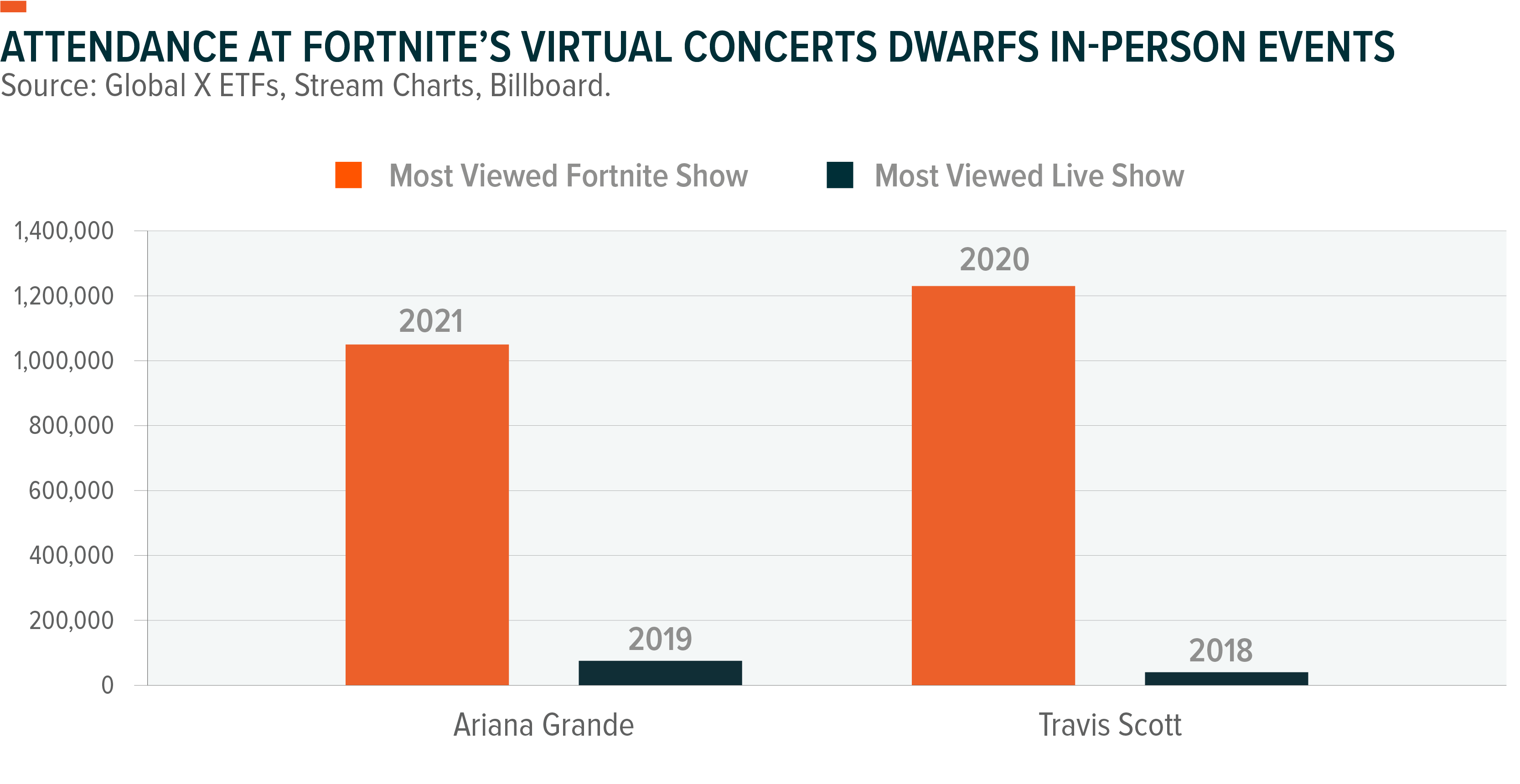 Similarly, Roblox’s popular experience Adopt Me! counts 6.2 billion annual visits on average since its release in July 2017.2 And Adopt Me! is just one of the thousands of places available to visit in Roblox’s platform. To the extent that traveling in virtual worlds and the real world are quasi-comparable, the metaverse could become an economical form of on-demand mass transit to explore new places, people, and cultures. For comparison, pre-pandemic, international tourist arrivals around the globe totaled 1.4 billion annually.3 The city with the most annual international visits pre-pandemic was Bangkok with approximately 23 million.4 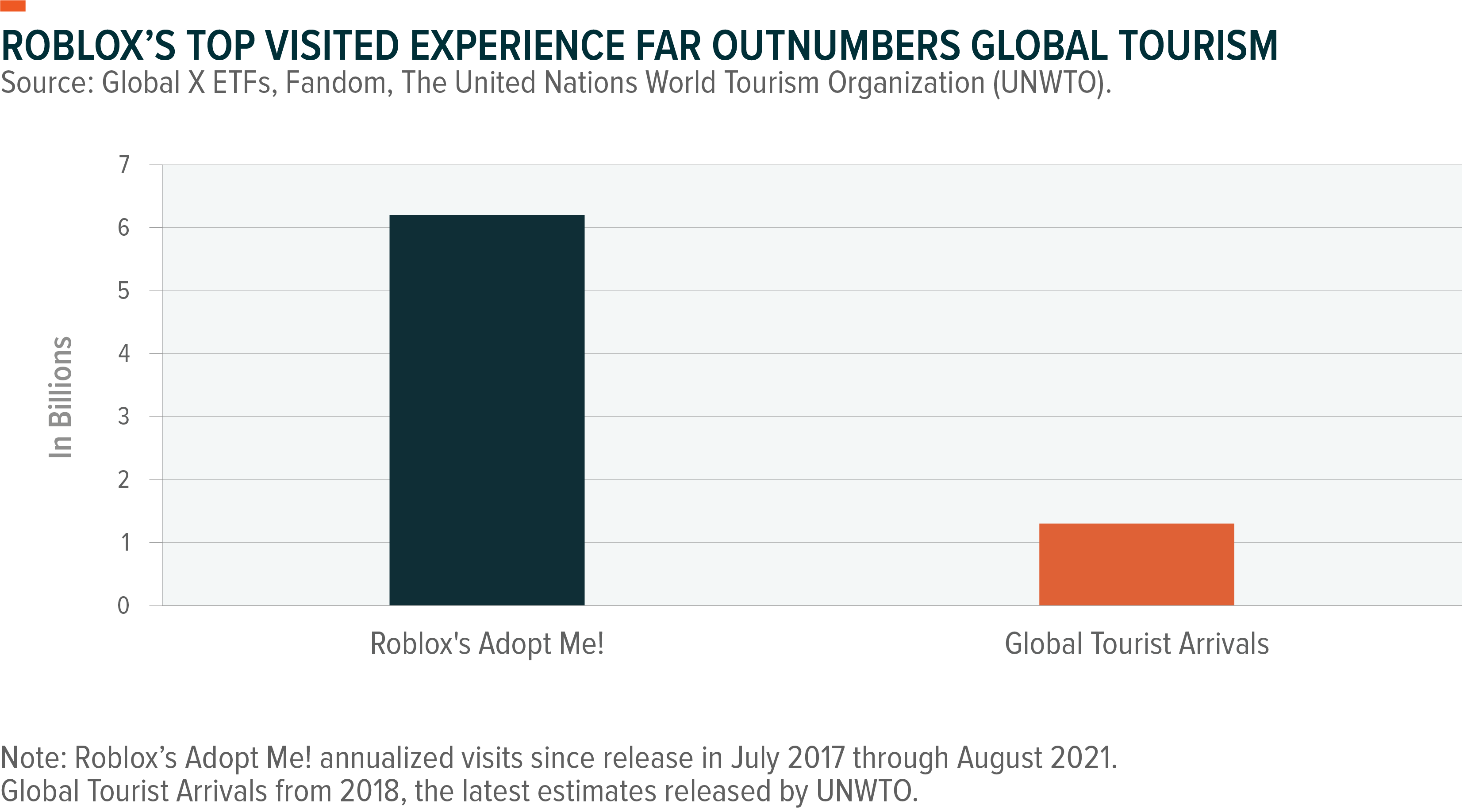 In August 2021, Facebook took a major step towards a metaverse offering when it unveiled “Horizon Workrooms,” a virtual meeting space where co-workers can interact with each other in the form of their digital avatars. Entering the workroom requires an Oculus VR headset and downloading the free app.

Each of these examples offer bits and pieces of what a full metaverse could ultimately look like. As companies invest further in building metaverse-related initiatives, it’s important to remember that what we call ‘the metaverse’ isn’t necessarily a centralized monopoly. Metaverse development may yield more centralized and distinct experiences currently, but it’s working towards an end-state that is a fully decentralized. And unlike in Ready Player One, which depicts a metaverse where the real world is left behind for one infinite virtual world, in our world several metaverses are likely to emerge.

Today, companies offer their metaverse experiences primarily through closed architecture systems, which means that their software and/or hardware is not compatible with other platforms. And different platforms are often designed for different primary use cases, such as gaming, working, shopping, or socializing. Eventually, however, we expect the most successful metaverse platforms to evolve toward a more open architecture that allows all (or at least many) parties—users, developers, and companies—to participate on equal terms.

For users to participate, they will simply need an entry point, whether it’s a VR set, smartphone, or PC, and an internet connection. When inside the most popular metaverse platform, we expect users to find functioning economies where they can spend or earn currency. Many will view the metaverse as a space for entertainment and leisure – using the digital space to meet with friends, shop, or consume media. These platforms will benefit from network effects, with more users resulting in richer digital experiences, thus attracting more users like family, friends, and acquaintances.

But equally important to a successful and thriving metaverse will be fostering a community that values the contributions of developers and creators who build the goods and experiences for the majority of users to enjoy. For these developers, the metaverse will be their place of work, whether they are designing a new game, digital items, or entire virtual worlds.

A truly open metaverse can be a decentralized virtual reality platform powered by blockchain technology. Such a concept already exists today with Decentraland, which is built on the Ethereum blockchain, giving community members the chance to create, experience, and monetize content and applications. Unlike other virtual worlds and social networks, no single agent has the power to modify the rules of Decentraland’s software, land, or the economics of its currency.5 Community members can buy, develop, and sell land, which, like in the real world, is finite, making it more valuable. 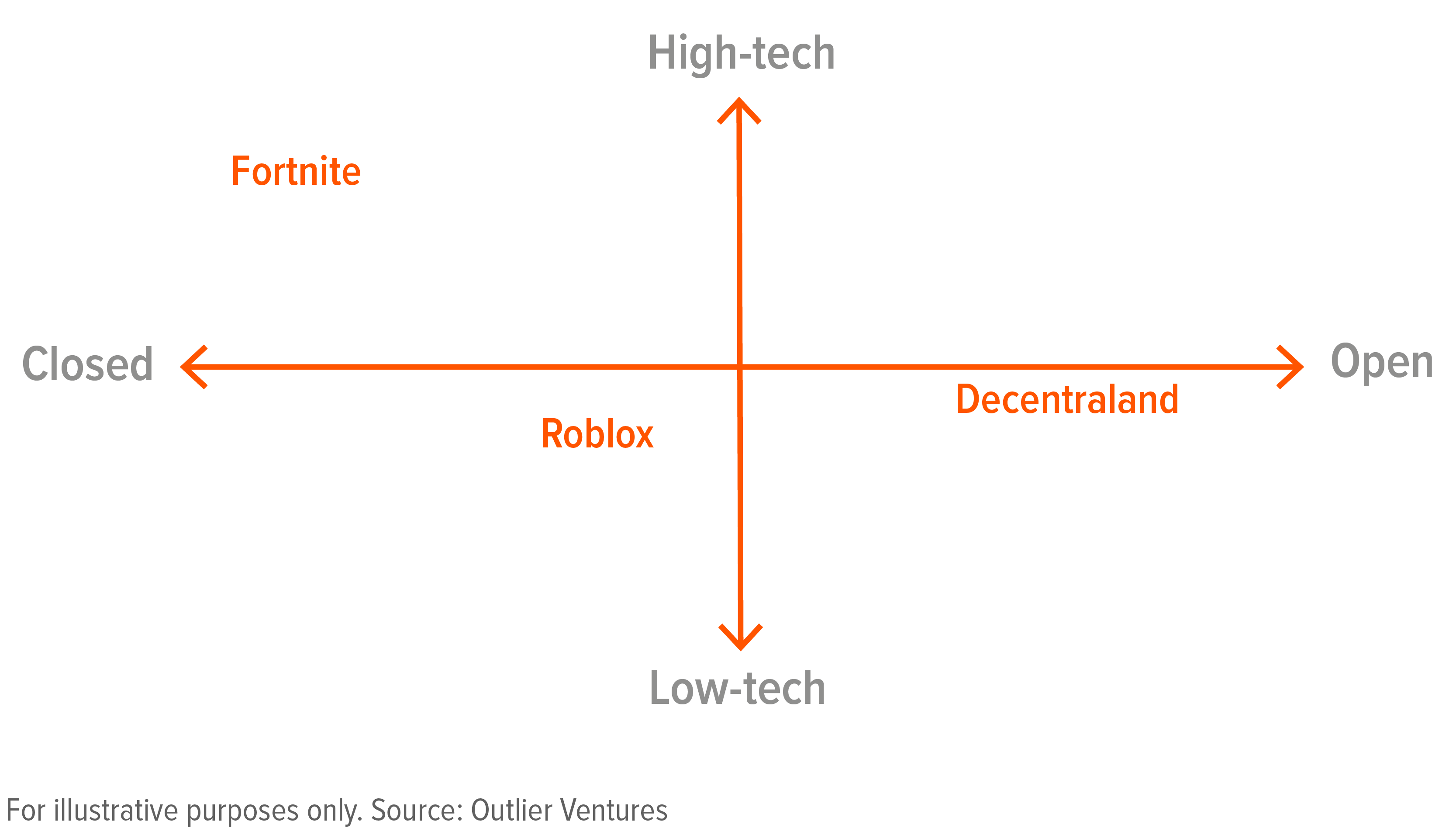 The Metaverse Is a Trillion-Dollar Opportunity

We expect the metaverse to create wide-ranging revenue opportunities across multiple verticals, particularly for those companies that develop virtual platforms and their components, semiconductors and chips that render ultrarealistic graphics, and the related software. 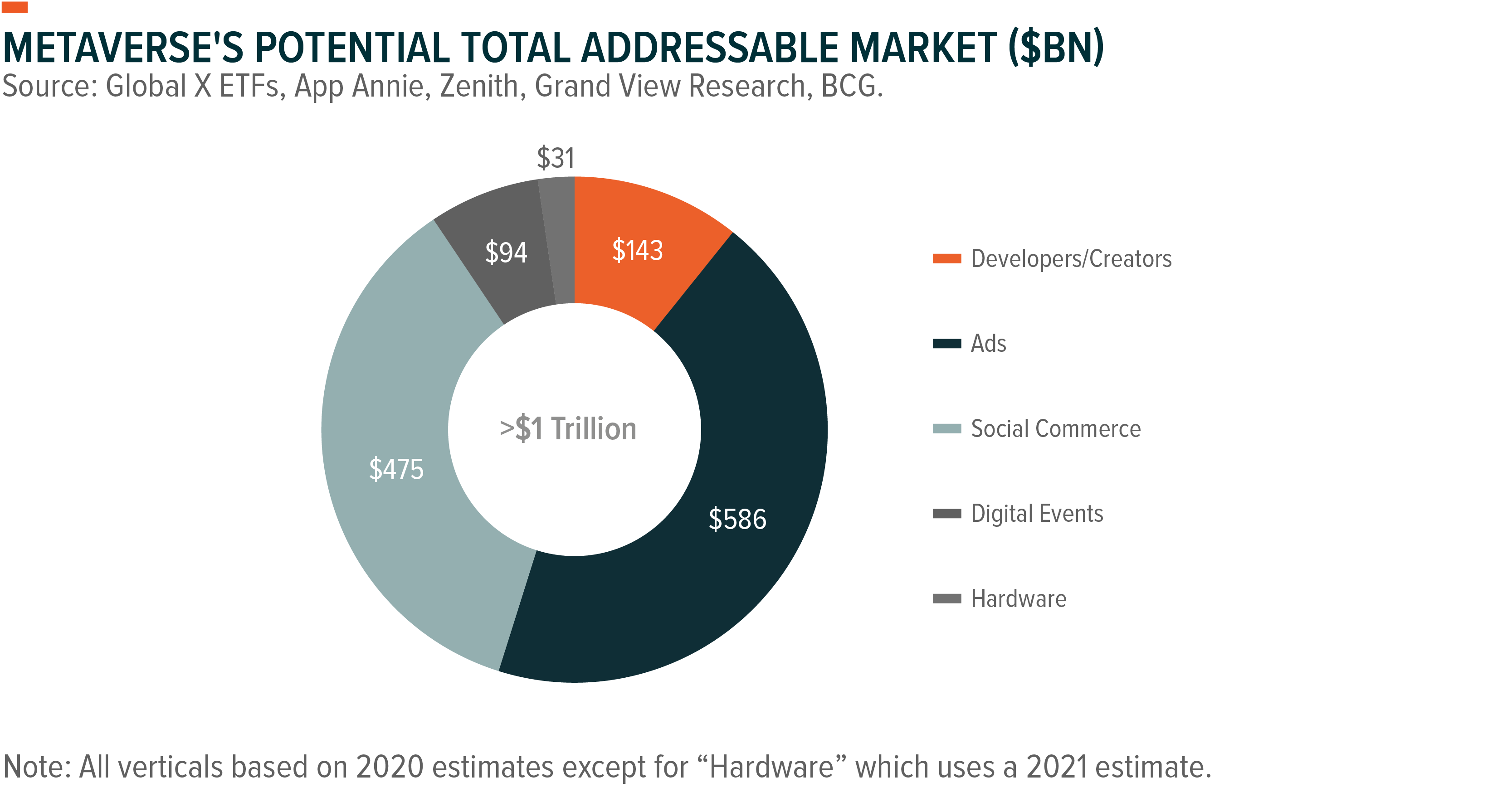 The metaverse is still in its early days, but the infrastructure is being built piece by piece and social attitudes are changing such that we may soon be ready to experience a new era of the internet. While it may take several years for fully formed, immersive metaverse experiences to become ubiquitous, earlier stage investment opportunities are emerging across multiple themes, including Social Media, Video Games, E-commerce, and Blockchain. At the heart of the opportunity are the social media and video game companies leveraging their large user bases, creator platforms, experiences with live digital events, and cutting-edge hardware to build the foundations of the metaverse. Beyond that, powerful e-commerce firms are likely to benefit from new sales channels and features, while blockchain companies are likely to be essential in providing the financial infrastructure underpinning the metaverse economy. While in the real world each of these themes continue to disrupt and redefine the status quo, we believe the metaverse presents billions of dollars of new opportunities for each of these themes.

HERO: The Global X Video Game & Esports ETF seeks to invest in companies that develop or publish video games, facilitate the streaming and distribution of video gaming or esports content, own and operate within competitive esports leagues, or produce hardware used in video games and esports, including augmented and virtual reality. Click the fund name above to view current holdings.

SOCL: The Global X Social Media ETF seeks to provide investment results that correspond generally to the price and yield performance, before fees and expenses, of the Solactive Social Media Total Return Index.

EBIZ: The Global X E-commerce ETF seeks to track the Solactive E-commerce Index, which focuses on companies positioned to benefit from the increased adoption of e-commerce as a distribution model. This includes companies whose principal business is in operating e-commerce platforms, providing e-commerce software and services, and/or selling goods and services online. 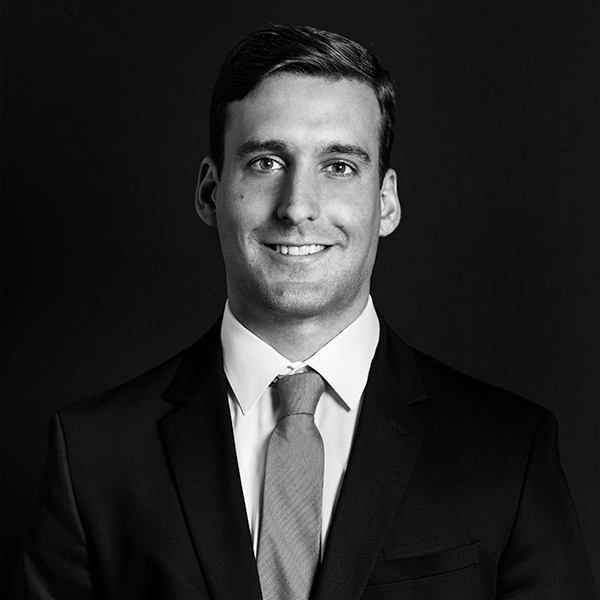 15. IDC, “Worldwide Spending on Augmented and Virtual Reality Forecast to Deliver Strong Growth Through 2024, According to a New IDC Spending Guide,” Nov 17, 2020.

Investing involves risk, including the possible loss of principal. Video Game and Esports Companies are subject to risks associated with additional regulatory oversight with regard to privacy/cybersecurity concerns, shifting consumer preferences, and potential licensing challenges. Investing in securities engaged in the social media industry or Information Technology includes risks, such as disruption in service caused by hardware or software failure; interruptions or delays in service by third-parties; security breaches involving certain private sensitive, proprietary and confidential information managed and transmitted by social media companies; and privacy concerns and laws, evolving Internet regulation and other foreign or domestic regulations that may limit or otherwise affect the operations of such companies. E-commerce companies may be subject to rapid changes in technology, intense competition, rapid obsolescence of products and services, loss of intellectual property protections, evolving industry standards and frequent new product productions, and changes in business cycles and government regulation. Investments in blockchain companies may be subject to the following risks: the technology is new and many of its uses may be untested; theft, loss or destruction of key(s) to access the blockchain; intense competition and rapid product obsolescence; cybersecurity incidents; lack of liquid markets; slow adoption rates; lack of regulation; third party product defects or vulnerabilities; reliance on the Internet; and line of business risk. Narrowly focused investments typically exhibit higher volatility. International investments may involve risk of capital loss from unfavorable fluctuation in currency values, from differences in generally accepted accounting principles or from social, economic or political instability in other nations. HERO, SOCL, EBIZ, and BKCH are non-diversified.