U.S. – China Trade War: Are There Any Winners in War?

Intentions are one thing. Reality is another. President Trump may want to level the economic playing field with China, but it’s unlikely to happen the way he’s gone about it. Starting the trade conflict was easy. Finding a way out is likely to be much harder with a longer duration.

While tariffs have weakened the Chinese economy, this has come at the expense of both U.S. and global economic growth. While U.S. tariffs have been broad and far reaching, Chinese retaliation has been shrewd and targeted. This has had major implications for U.S. farmers – don’t forget China stopped buying U.S. agriculture products.

Who holds the cards – China?

President Xi has some advantages in this negotiation. The largest of these is long term thinking. It’s tradition in China to stick steadfastly to targeted, long-term goals, even in the face of near-term challenges.  Last year’s removal of presidential term limits further increased China’s ability to play the long game.

The removal of presidential term limits also increases the stakes of these negotiations for President Xi. Should he agree to anything that is viewed negative for China, he could jeopardize his position within the Communist Party.

Since 2012, President Xi has been very successful at consolidating his power within the party, but any agreement would still need to project China as the great nation that they strive to be and also be in the country’s strategic interests.1

If President Xi can make his case to the Chinese people, he can play the long game – to an extent that the west probably underestimates.

President Trump thinks he has all the cards and throughout this trade dispute the U.S. has been the first mover. However, being on the offensive does not necessarily equate to driving the entire direction of a negotiation. China has been very calculated in their retaliation.

Unlike China, the U.S. is at the start of a new election cycle. This gives the U.S. a far more short-term perspective to negotiate from. Additionally, a strong stance against China talks well to most of President Trump’s base. Therefore, over the next year we expect to see a ramp up in rhetoric. However, we believe that the U.S. is going to need to change negotiating strategies or risk running out of option on how to drive the dialog of the trade negotiation.

While it is true that China imports a lot more into the U.S. than the U.S. does into China, trade negotiations go well beyond the value of goods that can have tariffs imposed on them. Throughout this negotiation, President Trump has threatened to add further tariffs when negotiations are not making enough progress. Should these tariffs come into effect in September, all goods from China will face tariffs. This makes negotiation by threat a more challenging tactic for the U.S. to utilize going forward.

It is also good to remember that tariffs are just a nicer word for a tax on the end purchaser. The U.S. is a consumer driven economy and therefore anything that impacts the end consumer is highly important for overall growth. Up until now, most of the goods targeted for tariffs have been less consumer focused. This means potentially a longer lead times before these tariffs reflect in the inflation numbers. Conversely, this final $300 billion targeted for tariffs are likely to have a more direct impact on consumer prices.

While the Federal Reserve (Fed) has been waiting more than a decade for inflation to return, they want demand driven inflation rather than cost push inflation. Higher prices driven by cost factors such as tariffs, increases the risks of stagflation. This also has the potential to make it more challenging for the Fed to be more accommodative should the economy show further signs of deceleration.

Beyond tariffs, what credible negotiating tactics does the U.S. have left within its arsenal? While the U.S. entered this trade dispute appearing to be the stronger party, what have they gained in almost 18 months?

“Trade wars are good and easy to win” is likely to go down in history as one of the largest miscalculations of the current administration. While it is easy to declare a trade war, finding a solution that leaves both sides believing that they got a good deal is far more challenging.

Tragedy of the Commons

This trade dispute can be viewed as a typical tragedy of the commons game theory scenario. Both parties know that they are better off making an agreement, but hubris is in the way of a solution. Each backtrack and tit-for-tat increases distrust and the likelihood of an extended conflict. This is likely to lead to further escalation in the trade conflict – setting us up for a much longer trade dispute. 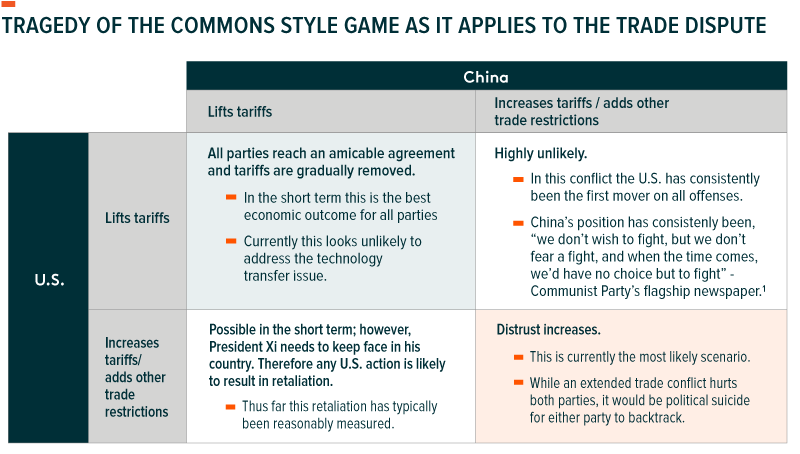 Currency war talk premature, but devaluation may be a tell

A growing concern is that the trade war could escalate to a full-blown currency war if China weaponizes its currency. China responded to Trump’s latest threats by permitting their currency to devalue below the 7-to-1 ratio against the USD, its weakest point in more than a decade.2

This devaluation could be viewed as China using alternative retaliatory measures to counter the tariffs – or that they permitted market forces to react to the threat of the tariffs. Stalling US agricultural product purchases along with the exchange rate move could signal Beijing’s intensions to not counter additional threats with tariffs of their own.

On the U.S.’ part, the administration used the devaluation as an opportunity to label China as a currency manipulator. Treasury Secretary Steve Mnuchin seems likely to engage the International Monetary Fund (IMF) about China’s latest actions. This is mostly a symbolic gesture since the IMF is unlikely to declare China a currency manipulator. China did not even react to this provocation.

So, the tariff thing is now likely a full-blown trade war and threatens to get worse. This means greater uncertainty which weighs on business investment. Should China fully weaponize their currency, this has the potential to result in even greater volatility. However, weaponizing a currency is challenging. Being a store of value is an essential part of being a good currency. Therefore, devaluing the Yuan as a trade dispute mechanism without risking triggering a lack of faith in their currency is a challenging tightrope walk to manage. In 2015 we all experienced what can happen when the market calls into question the value of the Yuan.2 Therefore, we believe that they are unlikely to make full use of this ability – particularly where it comes to their Treasury related nuclear option.

While we have ruled out that cataclysmic option, we still expect that the road ahead may be rocky and long. President Xi is likely to take a long-term view in these negotiations and the U.S. is running low on new tactics to force negotiations.