What to Watch For in the Second Half of 2018

So where do we go from here? Good question. Another one is, Where exactly is here? Just as this unprecedented era of easy money fueled by central bank intervention comes to an end, it appears a new era of tariffs and protectionism has given the market more riddles to solve. Forecasting how the market would respond to the removal of central bank stimulus was a Rubik’s cube in and of itself. The increasingly volatile geopolitical climate, namely trade tensions, adds a blindfold.

The first half of 2018 had plenty of drama, without much in terms of absolute returns. As we mentioned in our Q2 update, there were pockets of optimism, but they were largely overshadowed by geopolitics. In what follows, we outline what sets up to be an eventful second half, with tariffs, the Federal Reserve (Fed), the yield curve, geopolitics, and several wild cards likely to have a significant say in market performance.

Tax cuts and tariffs: Market tries to makes sense of the math
The trade spats seem to be more about politics than economics, which is, to say the least, a challenge for the market.

Consider that one of the main purposes of the U.S. tax cuts at the beginning of 2018 was to increase corporate spending. But the onset of a trade war could cause firms to curb capital expenditure. In this increasingly intertwined global economy, trade volume subsiding amid supply chain disruptions could negate any tax cut benefit and stunt growth.

By the Trump administration’s math, U.S. trade policies give up too much and cause significant trade deficits that eliminate American jobs. There may be some truth to that rationale, but economic data show that the annual U.S. trade deficit for goods and services rose from $384 billion to $568 billion from 2009 to 2017 while private U.S. payroll jobs jumped by 15.5 million and the unemployment rate fell from 9.3% to 4.4%.

That is a pretty large disconnect from the base case in favor of tariffs, leaving much for the market to interpret about all the potential downsides.

What could a trade war mean for growth?
Trying to quantify the potential fallout is not easy. According to a recent J.P. Morgan report, a full-blown trade war could dent global growth by at least 1.4% over the next two years, which is not inconsequential.1 What may be even harder to gauge is what it would do to business and consumer confidence, and spending.

What we do know as of this writing is that tariffs on U.S. goods are in full swing. Canada has imposed new tariffs on beef and Mexico was set to slap a levy on pork. The European Union’s initial duties totaling $3.2 billion are in effect, including 25% taxes on motorcycles, boats, and whiskey.

And then there’s China. In response to the U.S. preparing to implement an additional 25% tariff on 818 Chinese imports worth approximately $34 billion, China has been prepping an in-kind response in the form of an additional 25% tax on 545 U.S. products valued at $34 billion. Among the targets are soybeans, select dairy products, as well as the U.S. auto industry is a target. 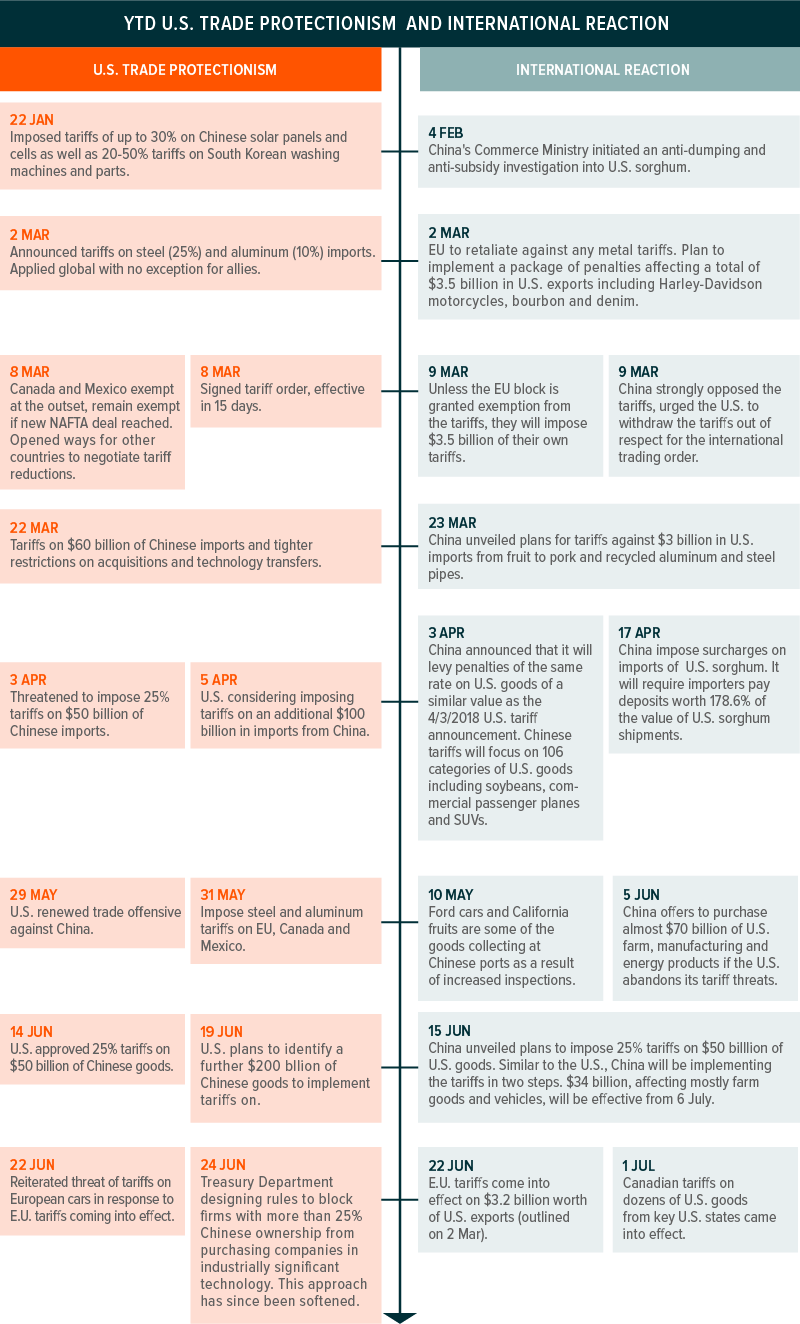 The Fed continues to normalize, while the yield curve flattens?
The Fed continues to put one foot in front of the other as it attempts to rebuild its toolkit. To no one’s surprise, the Federal Open Market Committee increased the benchmark fed funds rate by another 25 basis points to 1.75-2.00% in June, and appears set to hike two more times by the end of the year.

While short rates have moved up, long rates have increased much less than expected. When the economy is strong, typically the curve slopes upward and investors are paid more to lend money for longer periods. It’s a reward for taking the risk that inflation and interest rates will move higher.

But history shows that when the yield curve flattens, like it is now, it could be a sign that growth is not sustainable and that a recession may be on the cards. Then again, this low interest rate era isn’t typical, and it’s unclear what the market is saying right now. What it does not seem to be saying is that a recession is imminent.

The state of the bull may hinge on geopolitics
There is debate about whether this long-running bull market is on its last legs or actually still mid-cycle. Wherever it is, the Fed wants to keep it going because its toolkit still lacks punch coming off the last financial crisis.

For now, though, the major signs that typically herald the beginning of the next recession are not yet in place. Working in the economy’s favor is that unemployment is low; wages are tepidly rising, but not sharply; real interest rates are zero, even amid Fed tightening; inflation is moving higher, albeit slowly; the yield curve is not yet inverted; and profits are increasing, for now.

Notable, though, is that business done abroad represents more than 40% of earnings for constituents of the S&P 500®. If geopolitical events interrupt the continued expansion of the world economy, there is a risk that current positive cycle in the U.S. economy may end earlier than expected.

The final word: Market, meet Life
If you’re anything like me, the Fourth of July is about kicking back and relaxing with family and friends. The market typically does the same on the Fourth, and in July—to its detriment (historically, July is one of the year’s most painful market months2). This year, however, felt different. Maybe the midweek holiday gave it an odd vibe. There’s certainly a different market vibe this year, so maybe the Wednesday holiday was apropos, especially knowing there is a lot to come on the other side.

In the second half, we believe the market will focus on an administration that appears increasingly protectionist. The risk of denting American competitiveness globally amid worsening relationships with our trading partners adds significant uncertainty. That is not exactly a recipe for economic success at home, the viability of which will likely eventually be complicated by a growing budget deficit. Another potential wild card may be the midterm elections; historically, the market has corrected an average of -18.9% from peak to trough leading up to midterms based on data back to 1962.2

Amid all that uncertainty, there is a bull that has been running for nine-plus years. While it may be inclined to kick up its heels a bit with the rest of us this summer, it does not appear the broader economy is ready to do the same just yet. There will be much to track coming up, though, as the dynamics in July 2018 look a lot different than those in July 2017.

Basis point: A basis point is a hundredth of one percent. It is predominantly used to express differences in interest rates.