What’s Driving the Electric Vehicle, Lithium, and Battery Markets in 2019?

There has been substantial debate around electric vehicles (EVs), lithium, and batteries in 2019, generating both excitement and uncertainty among market participants. EV sales are growing rapidly as battery costs fall, automakers are introducing more electric models, and consumer preferences are evolving to favor cleaner vehicles. Yet concerns remain as global auto sales broadly decline, China EV subsidies are reduced, and substantial amounts of new lithium supply begin to come online.

In this post, we analyze each of these factors to better understand the current and future state of EVs, lithium, and battery technology.

How Strong are Electric Vehicle Sales?

Although global auto sales slowed by over 2% during the first quarter of 2019 relative to a year prior, sales of electric vehicles soared by 57%, reaching 496,000 vehicles in quarterly sales.1,2 Over the course of 2018, 1.9 million EVs were sold worldwide with approximately 5 million total passenger EVs driving on the roads today.3 These numbers are expected to continue to grow rapidly as battery costs fall, technology advances, consumer preferences evolve, and the regulatory environment supports low emission vehicles.

As the world’s largest auto market and a key proponent of electric vehicles, China continues to play a central role in EV adoption. In Q1 2019, EV sales more than doubled from the year prior with 276,000 cars sold, representing 5% of new passenger vehicle sales.4 Going forward, EV sales in China are looking to maintain this momentum despite the phase-out of certain government subsidy programs. Starting on June 26th, China’s New Energy Vehicle subsidy program will be reduced from RMB 50,000 ($7,400) to RMB 25,000 ($3,700) for EVs with over 400 km range. Lower-range EVs will also have their subsidies reduced and, in some cases, will be fully phased out. 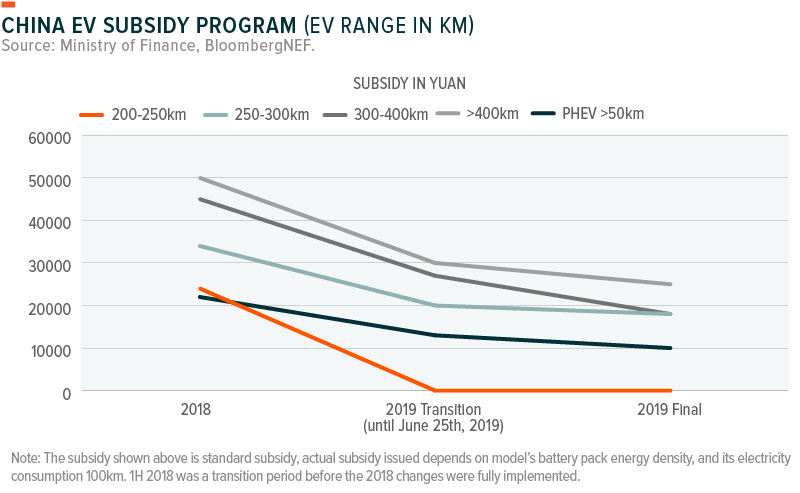 Despite reduced subsidies, China continues to solidify its leading position in EVs with other forms of supportive policies. For example, the New Energy Vehicle (NEV) quota system imposes credit targets for automakers. This quota system assigns a specific number of credits to a NEV model depending on metrics like electric range, energy efficiency, and rated power of fuel cell systems. Higher performance vehicles are assigned more credits, capped at six credits per vehicle.5 Automakers must meet a positive credit balance at the end of the year, or they’ll be forced to purchase credits from other automakers, reduce production of internal combustion engine (ICE) vehicles, or stop production of new models and receive a monetary fine.

What Will Drive EV Adoption?

While early adopters of EVs have been drawn to the low emissions and/or performance characteristics of high-end EVs, mainstream EV adoption will ultimately be driven by economics – the cost competitiveness of EV ownership versus ICE vehicles. It’s important to note that an EV’s price tag is primarily driven by the cost of its battery. Four years ago, batteries represented around 57% of the total price of a medium-sized EV.6 Yet by 2030, the cost is expected to fall to just 14%, setting a trajectory that should allow EVs to reach price parity with ICE vehicles by the mid-2020s.7 We believe that as EV costs fall in line with ICEs, consumers will increasingly choose electric models given their environmental benefits, lower fuel costs, improved performance, and reduced maintenance. By 2025, for example, EVs sales are expected to rise to 8.4 million vehicles or approximately 8% of total annual sales.8  Yet, when EVs become noticeably cheaper than ICE vehicles by 2030, economics should trump consumer inertia. Estimates suggest penetration rates could range from 20% to 50%.9, 10 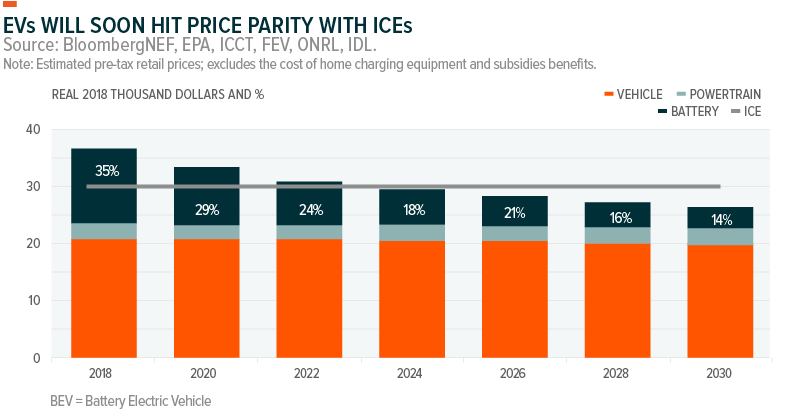 Can Lithium Producers Keep up with Demand?

With rapid expected growth of EVs, auto and battery makers must secure the critical raw materials for high end batteries, such as lithium. As a result, many OEMs and battery makers are entering into long contracts with lithium miners. It is estimated that only 10% of total LCE pricing is negotiated at spot prices, with long term contracts heavily favored in the industry. For example, Volkswagen (VW) recently announced a long-term agreement with Ganfeng Lithium, which will supply lithium for 10 years to VW. Such long-term contracts are often preferable for both OEMs and lithium producers who want to lock-in prices, often resulting in more stable cash flows. The contracts can also help lithium miners secure the financing required to ramp up their lithium output. 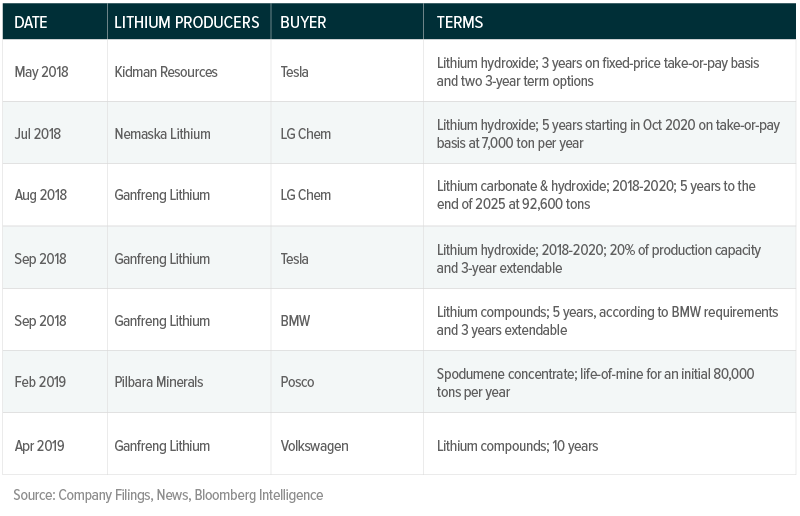 Given rising demand for EVs and the need to secure long-term lithium supply contracts, lithium majors are planning for scenarios where demand exceeds 1 million metric tons of lithium carbonate equivalent (LCE) by 2025. Some blue-sky scenarios are estimating 1.2 million metric tons of LCE, representing a 50% revision upwards from last year’s estimates,  and almost four and a half times 2018’s global demand of approximately 270,000 metric tons.11, 12

Should the Market be Concerned about Supply?

Forecasting future demand and rapidly scaling production to meet such expectations inherently carries risks. On one end of the spectrum, competition among miners to grow market share or to take advantage of higher prices can result in large amounts of supply coming online too quickly, putting downward pressure on lithium prices until demand catches up. On the other end, supply shortages can also arise because bringing new lithium online can face unexpected challenges related to weather, local regulations, labor conditions, financing, and geology.

Currently the market appears to be experiencing a bit of both scenarios.  In order to meet demand, lithium suppliers are rapidly trying to scale production. During 2018, lithium miners around the world announced capacity additions that could potentially bring production to 635,000 metric tons of LCE, putting downward pressure on lithium prices.13 Yet since Q4-2018 and Q1-2019, more than 200,000 metric tons of LCE of new investments have been hit by delays or have faced some other of challenges.14

Our view is that increasing lithium supply by four times current levels by 2025 is likely to face many challenges, including: 1) Given the concentration in the industry, lithium majors will continue to implement strategies to prevent new entrants from flooding the market; 2) Given the complexities of extracting lithium and bringing it to market, it takes time, expertise, and even luck, to bring on substantial supply in a timely manner; and, 3) In some key regions, regulators have rejected lithium capacity expansion plans. 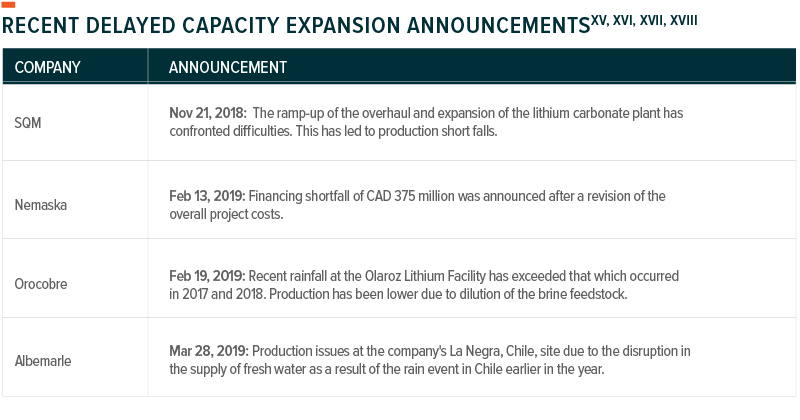 Furthermore, when analyzing supply increases, the quality of the lithium output must be considered. Much of the promised capacity additions have been regarded as non-battery grade, also known as technical grade. Tier 1 and 2 battery makers generally have rigorous qualification processes for procurement of the cathode and anode materials since the quality of the materials impact the performance of the battery.

Of note, battery makers have also been gearing up production capacity. Back in Q1-2015 there were just three megafactories in the world, a term that describes the surge of new, huge lithium-ion battery plants, usually larger than 1 GWh.19 By 2028, the industry is expected to include over 70 factories, resulting in 1.7 TWh of lithium-ion capacity.20

As the global auto industry is expected to undergo a great transformation from ICEs to EVs, batteries and the materials that are used in them should become increasingly critical to the global economy. Yet as the industry adapts to accommodate this great transformation, both opportunities and risks remain, as consumer preferences, regulations, and supply chains adjust to a new paradigm.

Investing involves risk, including the possible loss of principal. International investments may involve risk of capital loss from unfavorable fluctuation in currency values, from differences in generally accepted accounting principles, or from economic or political instability in other nations. Emerging markets involve heightened risks related to the same factors as well as increased volatility and lower trading volume. Narrowly focused investments may be subject to higher volatility. There are additional risks associated with investing in lithium and the lithium mining industry. LIT & DRIV are non-diversified.