Brexit: What to Make of It All

The United Kingdom’s complicated divorce from the European Union continues. The following summarizes where Brexit stands and potential political and economic ramifications. We will update this piece periodically as major developments occur.

A quick education about the British system of government

The United Kingdom (U.K.) arose from the Glorious Revolution of 1688 as a constitutional monarchy, governed within a framework of parliamentary democracy.

After an election, the monarch, currently Queen Elizabeth II, selects as prime minister the leader of the party most likely to command the confidence of the House of Commons. Typically, that is the party with the majority of MPs.

The Conservative Party and the Labour Party are the two major political parties in the U.K. Currently, six additional political parties and independents have representation within the House of Commons. In 2017, Prime Minister Theresa May called for an earlier election to solidify her position ahead of the Brexit negotiations. But the move backfired because the Conservative Party lost its parliamentary majority of 330 seats. That meant the party would need a strategic alliance to meet the 320-majority threshold in legislative matters.

The other chamber is the House of Lords. Roughly 800 appointees in this house make and shape laws. Importantly, they also provide oversight on the House of Commons. 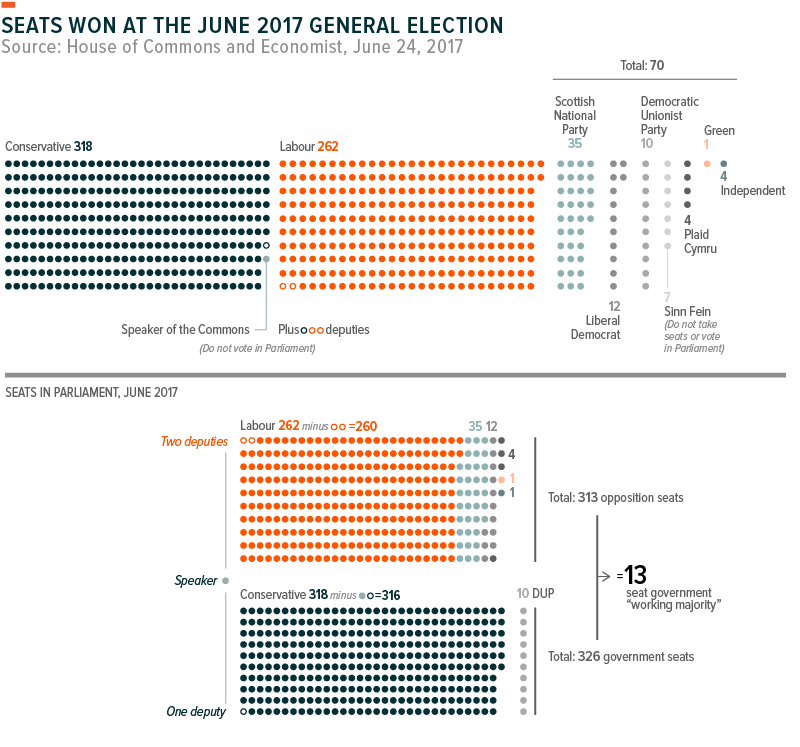 Prime Minister May went to Northern Ireland on February 5 in yet another attempt to solve one of the biggest hurdles to the U.K.’s divorce from the European Union: the Irish border. The extent to which this 310-mile stretch of land has been a stumbling block to a deal cannot be underestimated. To date, comments from political leaders about the state of affairs, and the growing risk of a no-deal Brexit remain, shall we say, cheeky at best.1

The border is at odds with what appear to be British Parliament’s three main goals for Brexit. First, to leave the E.U. single market and customs union. Second, to ensure a countrywide approach to Brexit. Third, to avoid a hard border with Ireland, i.e., a line of demarcation complete with checkpoints and customs posts that impede the flow of trade and people across the border. As for that last point, the question is how?

The U.K. failed to devise a border solution repeatedly after Article 50 of the Treaty of the European Union triggered the two-year window to Brexit, which is set to expire on March 29. That led the E.U. to require an Irish backstop to any withdrawal agreement. The backstop is something akin to a safety net. It involves a temporary single customs territory, and no hard border, until an agreement can be reached. If future talks do not result in a deal, the backstop applies indefinitely.

But there’s a problem

Many Brexiteers do not support any agreement that ties U.K. economic interests to the E.U. indefinitely, including Northern Ireland’s Democratic Unionist Party (DUP). That complicates matters because May’s Conservative government needs DUP support to get a majority in Parliament. Since the backstop specifies that Northern Ireland would remain aligned with the E.U. on certain single market rules, including those for goods, May’s proposal is a no-go for the DUP.

Parliament an obstacle in negotiations

May’s visit to Northern Ireland was her first since the House of Commons voted (loudly) against the agreement she negotiated with the E.U. The largest parliamentary loss in decades stoked fears that a deal before the deadline might not be reached.2

May has said that she will return to the House of Commons by February 13 with new proposals and to take suggestions on alternative backstop arrangements. However, reports following the non-productive Northern Ireland trip suggested she may delay that delivery.3

In Belfast, May reiterated that she wanted to modify, not remove, the backstop.4 But she also has to appease 27 other E.U. member states while ensuring enough support with politicians in London. That will not be easy.

For those politicians, she has pledged to strike a deal with the E.U. that “commands broad support” and a majority in Parliament. But she has also issued a fair warning: “The odds of success become much longer if this House ties one hand behind my back.”5

Along with everyone else, the financial markets see the clock ticking down on the deadline to strike a Brexit deal. A European court ruled that the U.K. could halt the divorce process and extend it beyond March 29 if all 28 E.U. members agree. But that seems unlikely with agreements hard to come by and Brexit now on the books as a U.K. law to enact.

This Section will be Updated Periodically- Four main outcomes and the market’s likely reaction, listed from most favorable to least, include the following:
— Second referendum: A long shot. Markets would likely be positive on a second referendum because it could take Brexit off the table entirely. Momentum appears to be growing for a redo; however, that scenario remains unlikely because it would be divisive for the Conservative Party and May.
— Some type of agreement: Most likely. Assuming there is a deal to be reached, market reaction would hinge on the state of the U.K. and the broader European economies at the time. Market reaction would also depend on any explicit deal matters that could affect the financial system.
— Extension: Possible but unlikely. An extension would let uncertainty linger and weigh further on the U.K. and European economies, as well as market sentiment.
— No deal: A risk. A no-deal Brexit would be highly disruptive to markets. Notably, all bilateral trade deals would need to be renegotiated without the benefit of a transition period. British authorities estimate that this scenario could cause a 25% drop in the pound, which is already down significantly since June 2016, and a 30% decline in home prices.6

Surveys suggest that the rising Brexit toll on investment and economic confidence should not be a shock, including the latest reading of the influential purchasing managers index for the services sector, which indicated the U.K. economy has stagnated.7 The latest meetings between May and politicians in Belfast, as well as her visit to the E.U. in Brussels, did not appear to inspire much confidence in a forthcoming deal. But at this point, that probably didn’t leave too many people gobsmacked either.