Can Lithium Keep Up With the EV Boom?

Not too long ago, electric vehicles (EVs) seemed like a distant dream. Battery technology was generally too expensive for the mass market, and not advanced enough to power long-distance drives. Today, EVs are closing the gap to become cost and performance-competitive with traditional internal combustion engine (ICE) vehicles. But for EVs to successfully achieve their full potential, the entire supply chain from lithium mining, to battery production, and car manufacturing, must be carefully calibrated and coordinated to meet rising EV demand.

Forecasts show demand for EVs surging within the next decade. Massive investments are being made to scale battery production and factories are being retooled to assemble hundreds of thousands of electric vehicles. But lithium mining projects are stagnating. Without enough upstream capacity, lithium shortages could increase prices or stall adoption. In this piece, we discuss this dynamic and what it may mean for lithium mining companies and EV adoption.

Battery Manufacturing Capacity Expected to Keep Up With EV Demand

While EV sales have grown substantially over the last few years, analysts expect the real acceleration to occur over the next decade. From 2015 to 2019, annual EV sales rose from 450,000 to approximately 2 million.1 Despite these gains, EVs still represent just 2.6% of total car sales, with internal combustion engine (ICE) vehicles still making up the vast majority of the 75 million unit new car market. This gap is expected to close as falling prices, new models and supportive regulations continue to fuel greater adoption. Over the last decade, battery prices fell by a 22% annual average decline, bringing EVs close to parity with ICE vehicles. While such a rapid price decline is unlikely to continue at the same rate, further cost reductions are expected to help attract more cost sensitive buyers. In addition, car manufacturers have announced dozens of new models in key markets like the US, China, and Europe, bringing greater variety and availability to consumers. Further, regulatory support and infrastructure help as well, with carbon-reduction mandates and the buildout of hundreds of thousands of charging locations, companies and consumers may be more incentivized to buy EVs. Owing to these factors, analyst estimates range from 25 million to over 45 million EVs by 2030.2 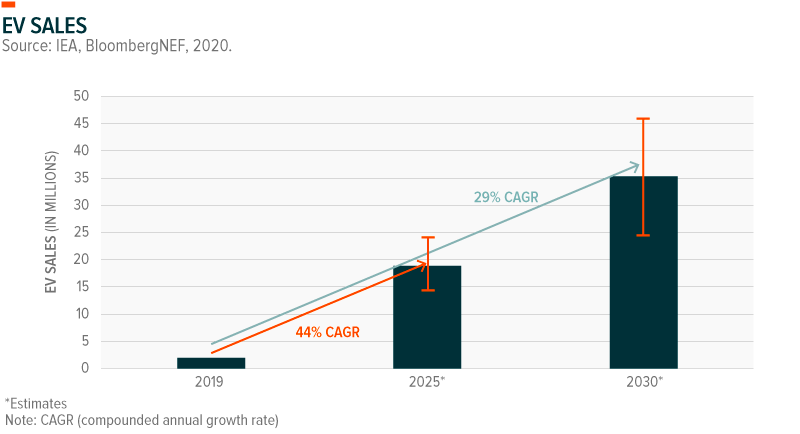 To keep up with such rapid EV demand growth, there must be enough lithium-ion batteries. Currently, global battery capacity is 455 GWh, and the average lithium-ion battery plant has an output of 7.9 GWh.3 Battery manufacturers have already planned massive capacity expansions over the next decade, with an estimated output of 2,450 GWh by 2029, enough to supply approximately 49 million EVs annually.4 For perspective, 49 million cars represents over 65% of total global auto sales in 2019.

Yet recent plans revealed by Tesla to launch a Terafactory throw a wrench in these estimates. Tesla’s massive new lithium-ion battery factory could add the equivalent of 1 terawatt hour (TWh), or 1,000 gigawatt hours (GWh) to global battery output. For context, the factory’s capacity would be 28 times bigger than Tesla’s already massive Gigafactory in Nevada. If the Terafactory ramps up as planned, it could increase global battery capacity by 40%, supplying 69 million vehicles with batteries.

Scaling battery production isn’t just about meeting ambitious EV targets, it’s also about achieving economies of scale to reduce battery costs. One of the key determinants of battery costs is the relationship between price and volume. Historically, for every doubling of cumulative volume, there is an 18% reduction in total battery price.5 Based on this information, we could infer that battery prices could decline to approximately $60/kWh by 2030, from approximately $120/kWh in 2019 with this greater manufacturing capacity.

Just as EVs depend on battery manufacturing capacity to meet their production targets, battery producers depend on access to raw materials like lithium to build their batteries.   The problem, however, is that lithium miners see little incentive to increase capacity right now. The current lithium market is slightly oversupplied, with mining output exceeding demand, which keeps a lid on lithium prices. Should miners increase production capacity, they will only put further pressure on lithium prices in the near term. We saw this pattern from 2015 to 2018 when high lithium prices resulted in greater capacity expansion plans, which ultimately pressured prices downwards. 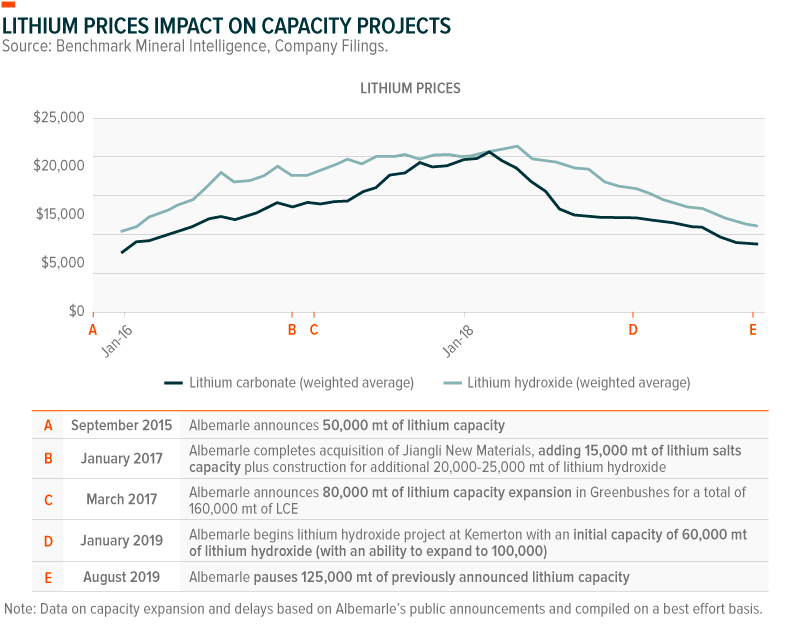 But if battery capacity reaches 2,450 GWh by 2029, as expected, it will require approximately 2 million metric tons (mt) of lithium carbonate equivalent (LCE) – over six times 2019’s lithium demand of approximately 300,000 mt of LCE.

Miners still have time to prepare to meet the massive demand, but even to double current output by 2025 – delivering less than one third of 2029’s expected demand – seems ambitious. Depending on the method of extraction, lithium extraction can require 3-5 years or more of studies, permitting, capital raising, and capex before any lithium is produced. With EVs potentially reaching purchase price parity with in as soon as 2–3 years, a lithium supply crunch could be looming.6 Plans for the Terafactory behemoth make the numbers even less plausible: By itself, a Terafactory operating at full capacity would require about 800,000 mt of LCE, or 2.5 times 2019’s total lithium demand.

Yet as badly as car and battery manufacturers may want miners to start new projects, lithium miners have indicated they are in no rush to bring millions of tons to market. To miners, building out supply ahead of demand is costly, puts downward pressure on lithium prices, and transfers risk to the miners. Waiting for demand to build first and then adding supply, however, would likely increase the price of lithium, padding miners’ margins and transfer the risk to the OEMs.

OEMs may have some options to avoid a lithium crisis. Offtake agreements, where downstream manufacturers lock in future feedstock supply by financially supporting upstream operations, have been common in the industry. However, it hasn’t yet incentivized miners to ramp up capacity expansions as lithium prices remain under pressure.

One option could be to buy into the lithium market directly, in order to control the long term supply chain. Some speculate that Tesla could be the first OEM to take full operating control of a raw material mining interest. If Tesla were to buy a lithium mine, estimates hold that the company could produce lithium at $5,000–6,000 rather than the current average selling price of $8,000–12,000, by leveraging their cheap cost of capital and cutting out middle men. In that case, Tesla could lower the price of a battery by approximately 4% through lower commodity prices.7

Elsewhere, VW and Daimler appear to be poking around the lithium mining world, commissioning studies in Chile’s Salar de Atacama, home of leading lithium miners Albemarle and SQM. The studies seek to address environmental concerns and spur measures for sustainable lithium mining for the long term.

Miners could also be interested in taking on battery production responsibilities. Leading Chinese miner Ganfeng and its unique, vertically integrated business model is an example. Ganfeng has operations along the entire lithium supply chain, including upstream lithium extraction, midstream lithium compounds and metals processing. Downstream efforts include lithium battery production of its own and recycling.

Beyond current estimates for EV growth, new battery technologies could use even more lithium to power greater mileage between charges and extend a battery’s life by years. Next-gen of batteries, including pre-lithiation, solid state, and lithium metal anodes all require lithium in the battery’s anode component. Current and previous technologies only require lithium in the cathode component. In fact, next-gen technologies like solid state could require twice as much lithium as traditional technologies.8 While the EV industry slowly incorporates advanced and next frontier battery technologies, consumers are expected to continue to experience enhanced features such as longer driving range of over 500 miles in a single charge with a life cycle of over a thousand charges. 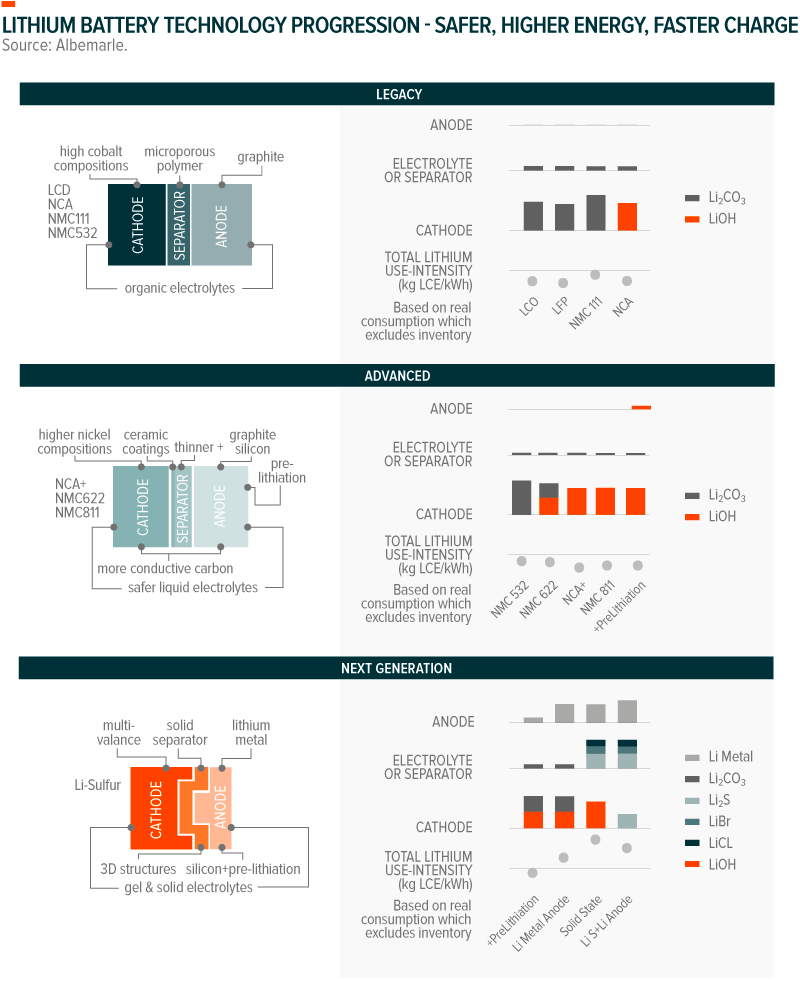 Electric vehicles are at the precipice of transforming the automobile market. Battery costs are falling, while technology and performance are improving dramatically. Soon, EVs won’t be a luxury choice, but an economical one. Add advancements in autonomous driving, which will largely rely on EVs to deliver driver-free ride hailing or robo taxi services, and we could see a rapid ascent of EV sales. Yet these aggressive goals can’t happen in a vacuum. To meet the EV sales and battery manufacturing targets, greater investments in the lithium space are needed. OEMs and miners might have to get creative, but at present, an undersupplied market looks possible. While undersupply may slow EV adoption in the near term, its effects are likely positive for lithium miners who would enjoy higher selling prices until investments in new projects begin to yield greater lithium output.

4. Benchmark Mineral Intelligence, “Bigger than Giga: Are the lithium-ion battery terafactories coming?, May 29, 2020. Note: Estimate of 49 million EVs based on a 50 kWh battery capacity per vehicle. Battery capacity may or may not increase in the future, impacting the estimated number of vehicles that could be produced based on the battery megafactories’ capacity estimate.

7. Note: Battery cost can be reduced by approximately $5 kWh, which based on an average battery cost of $120 kWh, results in a 4% cost decline.

Investing involves risk, including the possible loss of principal. International investments may involve risk of capital loss from unfavorable fluctuation in currency values, from differences in generally accepted accounting principles, or from economic or political instability in other nations. Emerging markets involve heightened risks related to the same factors as well as increased volatility and lower trading volume. Narrowly focused investments may be subject to higher volatility. There are additional risks associated with investing in lithium and the lithium mining industry.

The investable universe of companies in which DRIV may invest may be limited. The companies in which the Fund invests may be subject to rapid changes in technology, intense competition, rapid obsolescence of products and services, loss of intellectual property protections, evolving industry standards and frequent new product productions, and changes in business cycles and government regulation.  LIT & DRIV are non-diversified.