Current Sector Views and May 2021 Recap

There was one key question that summarized market performance during May: Is inflation permanent, transitory, or some combo thereof? Consumer price index (CPI) increased 4.2% year-over-year (y/y) in April, its first reading above 4% since 2008. This put the magnifying glass back on inflation and the pressing question of what happens after supply constraints are normalized? Should investors be preparing for a short-term increase in inflation or are higher inflation expectations likely to result in more persistent pricing pressures?

Consumer price index (CPI) increased 4.2% y/y in April, well above market expectation of a 3.6% increase. While this was a sharp increase from the 2.6% reading in March,1 we remain in the portion of the reopening recovery where inflation is expected to be high and is being measured off a lower base. In our view, the U.S. is likely to experience a temporary spike in inflation, which will likely moderate after the bottleneck of this unprecedented economic reopening. We anticipate pricing pressures are likely to peak in mid-2021 and begin moderating towards the end of the year. Additionally, labor market dislocations are putting upward pressure on wages – this creates the largest sustained risk to inflation potentially shifting from temporary to something more permanent. The longer these shortages last, the greater the probability for sustained increases in prices and wages. While this could form the base for sustained inflation, at this stage, sustained elevated inflation is not our base case view.

In our view, inflation is likely to remain a key market focus for the next six-months, with increased scrutiny on the Federal Reserve (Fed) statements. However, stemming from our view that inflation is likely to be transitory rather than permanent, we believe that over the next few months there could be an improved balance between the reopening trade and more forward-looking ideas. Markets are forward-looking and therefore as the economy reopens, the market is likely to start focusing on new trends. As such, while we believe that it remains important to maintain some inflation protection, in our view, the majority of the recovery trade has already played out and a large amount of the inflation expectations have been factored into the market.

The Risk of Taper Talk

The Fed remains in supportive mode, but there is growing concern that the stronger than expected economic recovery could bring forward taper talks. The market currently expects the Fed to begin taper discussions during the summer with balance sheet reductions commencing before year end. This amplifies the scrutiny on clues for when the Fed’s bond buying program may end. The Fed has promised to provide ample warning prior to tapering. But according to Dallas Fed President, Robert Kaplan, these talks of tapering should begin “sooner rather than later.”2 Kaplan was not alone with this sentiment.

According to Fed Chair Jay Powell’s April press briefing, the economic recovery has progressed faster than expected; however, the recovery remains uneven with residual weakness in the worst affected segments. This statement was reasonably balanced between encouraging signs of progress and reasons that Fed support remains essential. According to Jay Powell, inflation readings are likely to rise before they moderate. Thus far, the Fed’s messaging has emphasized their view that the current spike in inflation is transitory. According to the Fed’s statement, “a transitory rise in inflation above 2 percent this year would not meet this standard” [the standard to raise interest rates / become less supportive].3

The chart below reflects how the market has been weighing on every word from the Fed. Between the weak jobs report and CPI coming in well above expectations, May posed challenges for the messaging from the Fed. In addition to Robert Kaplan posing the taper question, James Bullard, president of the St. Louis Fed also reflected a dissident narrative from the Fed’s transitory messaging through stating that “some, but not all, of the inflation is transitory.” Following the April FOMC meeting, the market experienced significant performance differences between growth and value. 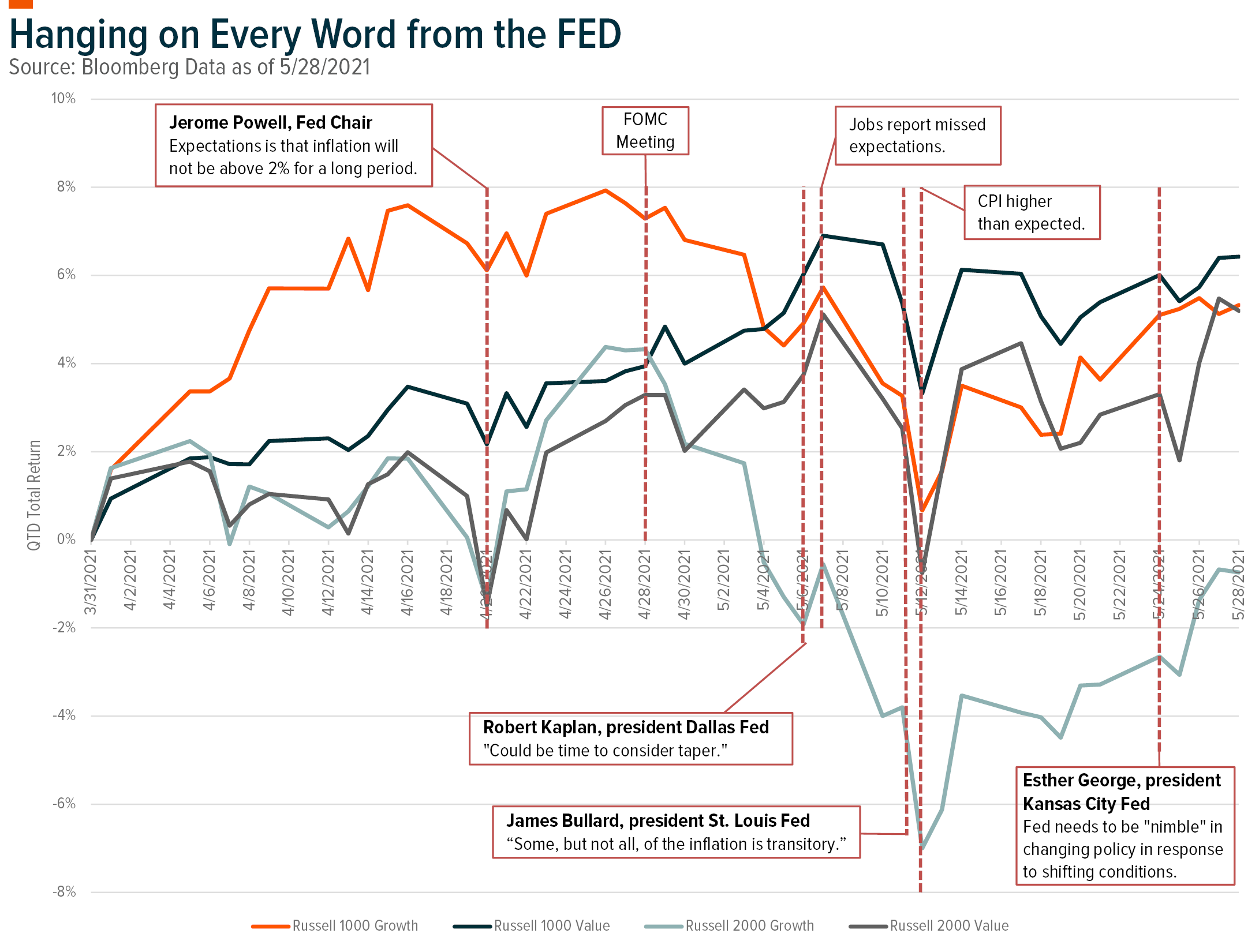 There are three key factors that talk to why the current concerning levels of inflation are likely to remain transitory: 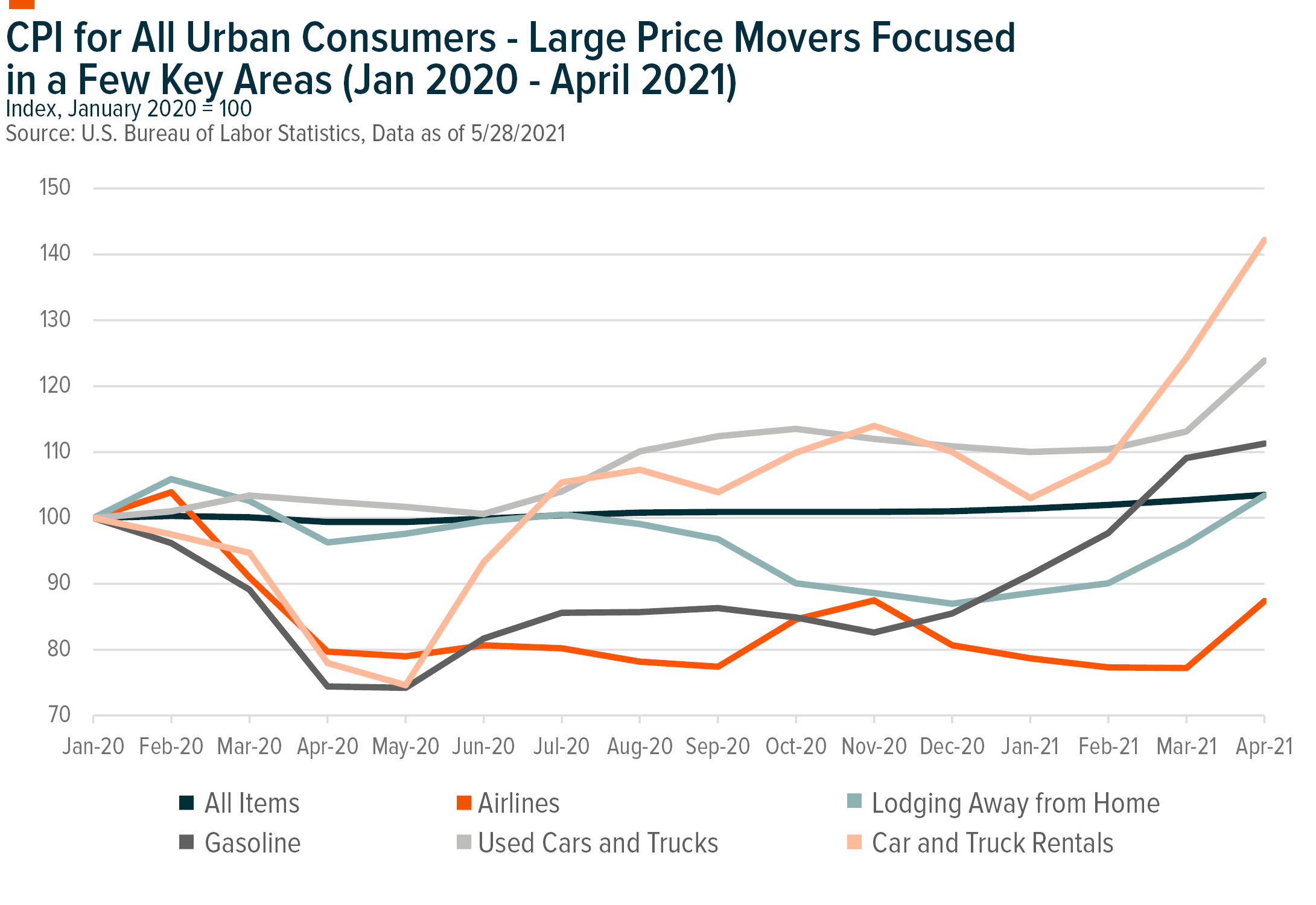 Higher prices reflect firms trying to restore margins after a challenging 2020 that included rising input costs. This creates a one-off increase in prices which is likely to be transitory.7 We anticipate the current inflation trajectory will have three phases and play out over the next few years:8

While it is our base case that price pressures are temporary, since we have not experienced a post-pandemic reopening, it is difficult to predict how long the pressures will persist. If elevated pricing pressure persists, this could result in higher inflation expectations, which would help further push up prices. 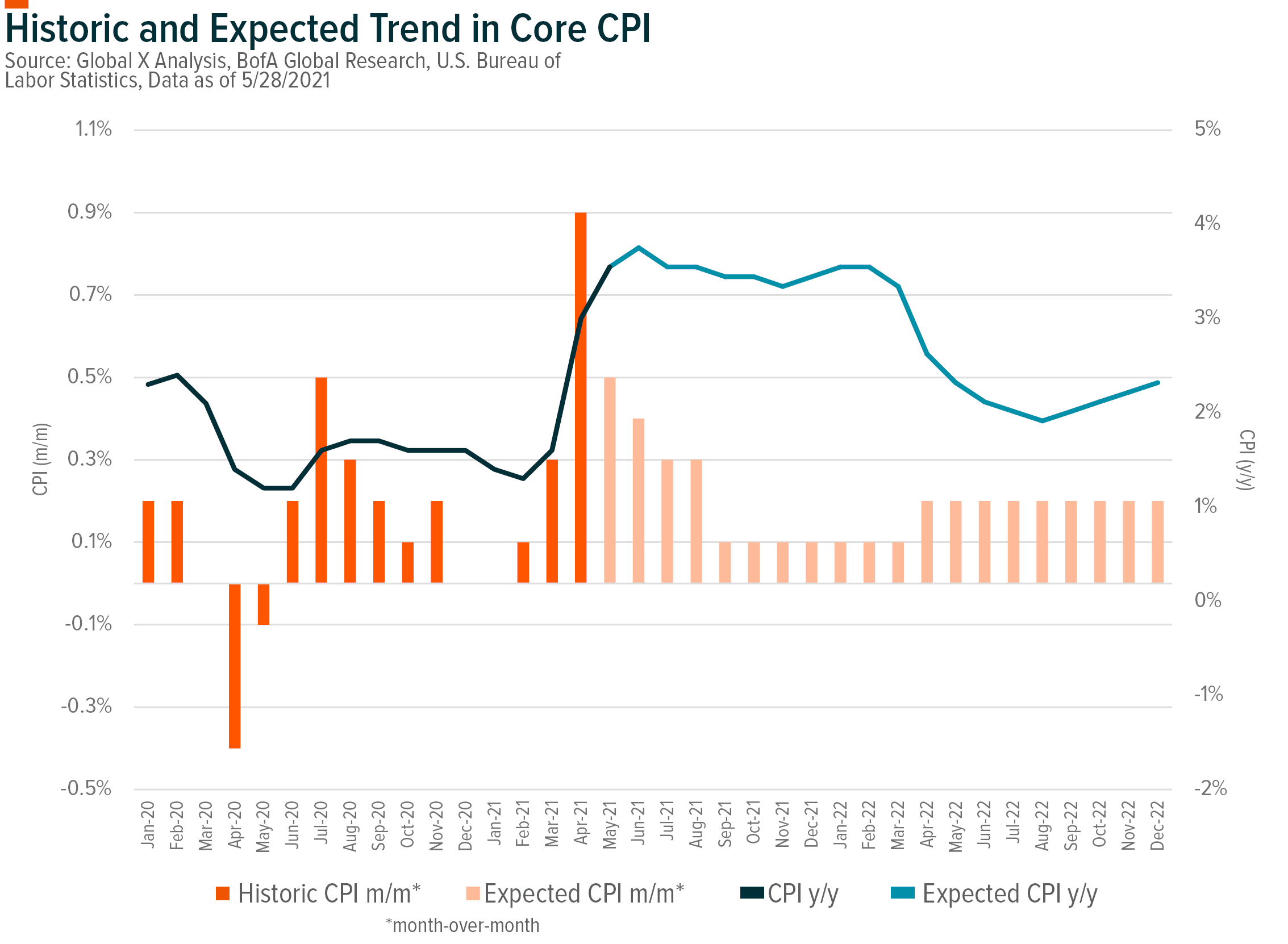 As vaccination rates increased, the economy has reopened and consumers have reengaged with portions of the service economy that were underutilized during the pandemics (air travel, lodging, restaurants, hair salons). This has driven a surge in hiring within the service sector. Similar to the bottlenecks in supply chains, the labor market is facing frictions that have removed an estimated 4.3 million workers from the labor force as of April 2021. As such, filling these positions has become more challenging and this has put upward pressure on wages.9

This wage pressure is expected to be its highest during mid-2021. According to Bank of America, they’re expecting the labor shortage to normalize by the fall as reopening demand moderates and workers re-enter the labor market. The expiration of the additional unemployment benefits should help encourage some workers back into the labor force. Additionally, child-care, elderly-care and COVID-related health concerns are anticipated to have reduced by this stage.10

Pressure on wages are a concern for inflation expectations as wages increases are typically reasonably sticky. Additionally, higher wages, especially for lower-wage earners, could facilitate higher consumer demand.11 Combine this with higher inflation expectations, and there is the potential for more persistent pricing pressure. However, a sustained rise in prices is likely to require a sustained increase in wages relative to productivity.12 This is not currently something that we view as the most likely scenario.

As discussed last month, we are potentially shifting from the stage of the recovery where the rising tide lifts all boats, into a more selective recovery with a greater focus on fundamentals. We believe that this is likely to be increasingly evident during the coming months as the recovery and reopening trade concludes and the market looks for new inspiration.

In line with this, the table below outlines the sectors we currently view as the most attractive during the economic reopening and into the rest of 2021.

Consumer Price Index (CPI): CPI measures the average change in prices that consumers pay for a defined basket of goods and services.

Russell 2000 Index: The small-cap market index consists of the smallest 2,000 markets in the Russell 3000 Index.

Russell 3000 Index: A capitalization-weighted stock market index, maintained by FTSE Russell that seeks to be a benchmark of the entire U.S. stock market. It measures the performance of the 3,000 largest publicly held companies incorporated in America and measured by total market capitalization.

Shares of ETFs are bought and sold at market price (not NAV) and are not individually redeemed from the funds. Brokerage commissions will reduce returns.
Index returns are for illustrative purposes only and do not represent actual fund performance. Indices are unmanaged and do not include the effect of fees, expenses or sales charges. One cannot invest directly in an index. Past performance does not guarantee future results.

Carefully consider the funds’ investment objectives, risk factors, charges, and expenses before investing. This and additional information can be found in the funds’ summary or full prospectus, which may be obtained by calling 888-493-8631 or by visiting globalxetfs.com. Please read the prospectus carefully before investing.