As we move past the doldrums of September into the Q3 earnings season, there is optimism amid concerns. But can that optimism be sustained? We are well into earnings season, with 56% of companies in the S&P 500 Index having reported their Q3 earnings, as of 10/29/2021, with many delivering comfortably above expectations despite lingering macro-economic concerns circulating throughout the market. Companies across industries have highlighted a robust level of demand and are managing to pass on higher input costs resulting from supply chain bottlenecks.

The market has placed greater focus on the June meeting as Fed officials have also mentioned that they would rather not add stimulus while at the same time as raising
rates – meaning that the door to interest rate hikes won’t open until the tapering door closes. According to the Fed’s plan, they’re expected to reduce their $120 billion worth of monthly bond purchases by $15 billion each month, potentially starting in November. This places the end date around June, potentially opening the door to higher policy rates into the second half of next year.

We believe higher yields are coming, it’s likely just a matter of time. Depending on how the Fed’s statements shape expectations, the November FOMC meeting may result in further steepening of the yield curve. If this scenario comes to pass, from a portfolio management perspective, it’s important to understand which sectors typically perform well during a rising rate environment and why.

In chart 1, we looked back over 3 years of data, plotting the correlations of S&P 500 sector excess returns against changes in 10-year treasury yields and WTI crude oil prices. The period under review was dominated by the COVID crisis where crude prices were highly sensitive to global economic growth expectations. The analysis shows that some sectors experienced compounding effects to the downside while others were beneficiaries. 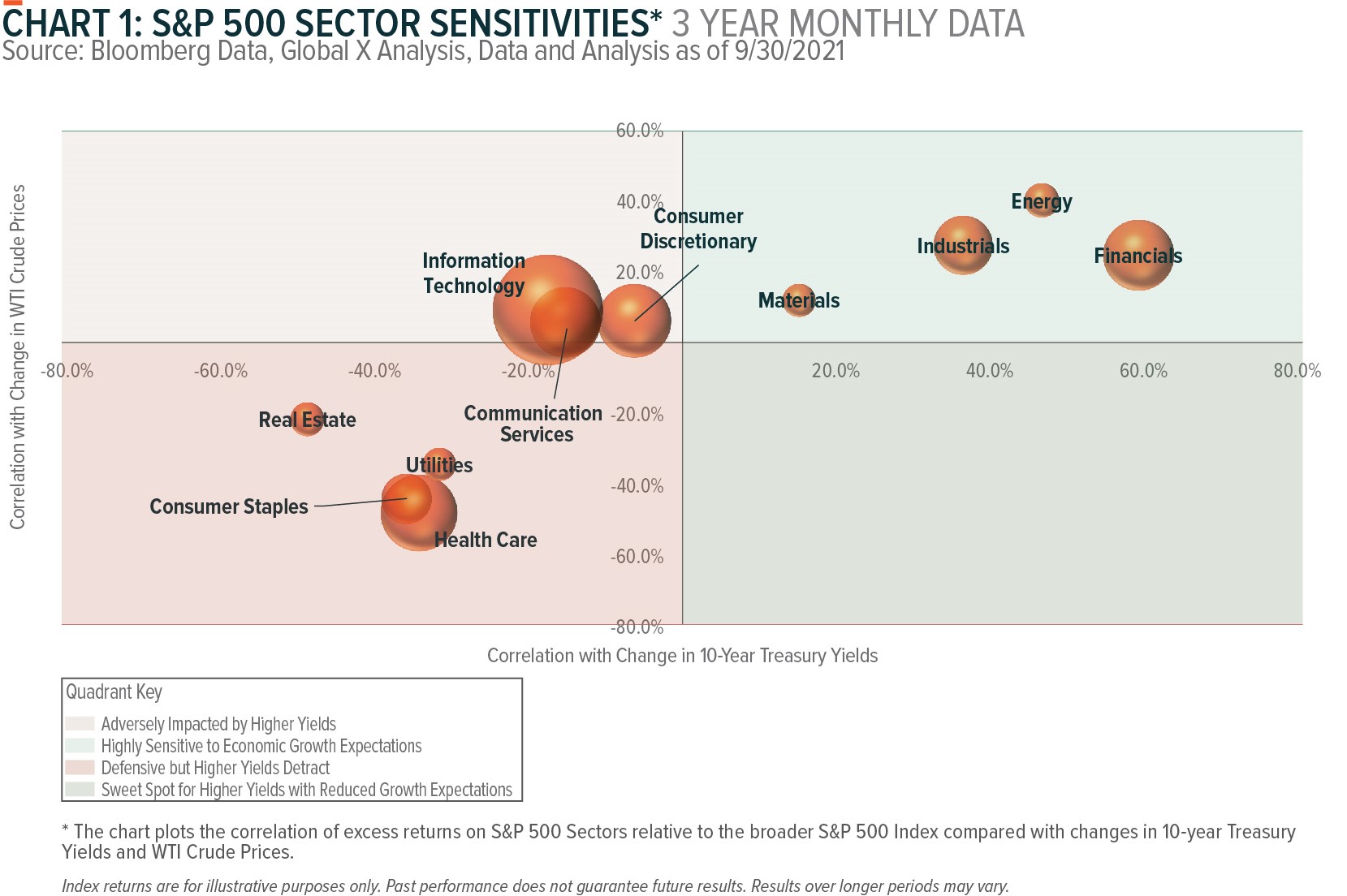 Sectors that are Sensitive to Economic Growth Expectations

Financials have historically been the biggest beneficiary of higher interest rates as a result of a steeper yield curve and greater willingness to lend. As rates trend upwards, banks tend to benefit from higher lending activity and higher interest rates charged to their consumers. In addition, the steepness of the yield curve is important for bank’s net interest margin as they typically lend at long-term rates while borrowing short-term. Stemming from this, a steeper yield curve is also likely to encourage greater lending activity.

Higher yields and an upward sloping Treasury yield curve are associated with higher economic growth. These growth expectations are highly important for certain key sectors including Energy, Industrials and Materials. Referring to Chart 1, these three sectors and Financials are in the quadrant that is most sensitive to changes in economic growth expectations. This has pros and cons as the economy navigates the shift from a highly stimulatory environment, to standing on its own.

The Information Technology, Communication Services, and Consumer Discretionary sectors fall into the top left quadrant where they are favorably impacted by economic growth expectations but adversely impacted by higher Treasury yields. As growth focused market segments, they benefit from future earnings being discounted at a lower interest rate. As yields rise, valuation concerns are likely to weigh on these three sectors.

In an environment where yields are likely to rise, but economic growth could be called into question, the sectors that fall into this quadrant are at increased risk. On a positive note, these three sectors had only minimal sensitivity to crude prices. Typically, these three sectors have held up well during periods where economic growth has come into question, as they benefited from the resulting decline in yields. However, they may be vulnerable to the impact of supply chain constraints as seen in recent earnings reports.

The Health Care, Consumer Staples, Utilities, and Real Estate sectors had a negative correlation to both higher interest rates and higher WTI crude prices. Consumer Staples, Health Care and Utilities are considered defensive sectors. They typically perform relatively better in the later parts of the economic and business cycle when interest rates and inflation have peaked.

What is on the Horizon?

Yields and economic growth are likely to be a key focus as the market navigates the Fed tapering their monthly bond purchases. As tapering begins, we expect the yield curve to steepen in response and be a positive for the Financials sector. But it does seem that the market is reacting well to the slow-moving actions of the Fed, which is allowing markets to adapt slowly to the new market paradigm.

Will the market have the same reaction to higher crude prices? Crude prices have been a reasonable proxy for global economic growth expectations during the depth of the COVID crisis and into the reopening phases. But with mounting supply chain pressures, higher fuel prices could undermine the economic recovery – detracting from discretionary consumption and real GDP growth. While the Energy sector benefits from higher crude prices, this is an inflationary force that flows through the entire economy and could bring forward interest rates.

Please refer to our current sector views table on the next page.

Investing involves risk, including the possible loss of principal. Diversification does not guarantee a profit or ensure against a loss. Narrowly focused investments may be subject to higher volatility. Technology-themed investments may be subject to rapid changes in technology, intense competition, rapid obsolescence of products and services, loss of intellectual property protections, evolving industry standards and frequent new product productions, and changes in business cycles and government regulation.

Carefully consider the funds’ investment objectives, risk factors, charges, and expenses before investing. This and additional information can be found in the funds’ summary or full prospectus, which may be obtained by calling 888-493-8631 or by visiting globalxetfs.com. Please read the prospectus carefully before investing.