While many people may be familiar with EV pioneer Tesla, there is an entire ecosystem of battery producers and lithium mining firms that are playing critical roles in this transformation. At a high level, the industry’s ecosystem starts upstream with lithium miners that extract the metal from the earth. These raw materials then move into the chemical conversion process to produce lithium carbonate or lithium hydroxide. Battery producers combine carbonate or hydroxide with materials to form a cathode and an anode, together forming an individual battery cell. Thousands of cells may be combined to create a battery pack for an EV.

In this piece, we highlight four companies that represent key players in this ecosystem:

Ganfeng Lithium along with Albemarle, SQM, Tianqi Lithium, and Livent control more than 70% of the world’s lithium supply. Established in 2000, Ganfeng is the third-largest lithium compound producer in the world and the leading producer in China. The company is unique because it covers a wide swath of the lithium-ion battery supply chain, including lithium resource development, refining & processing (75% of total revenue), battery manufacturing (17% of total revenue), and battery recycling & other (8% of total revenue).1

Ganfeng has a broad international footprint with lithium operations in Australia, Argentina, Mexico, and Ireland, in addition to its resources throughout China. Mount Marion in Western Australia is Ganfeng’s primary source of lithium. Different locations require unique approaches to efficient lithium extraction. In Australia the company uses hard rock lithium extraction processes.2 In Argentina, Ganfeng extracts lithium via a brine process as is common in Latin America’s Lithium Triangle (Argentina, Bolivia and Chile). In Mexico, the company is exploring new lithium clay extraction methods with an expected production start in 2023.3 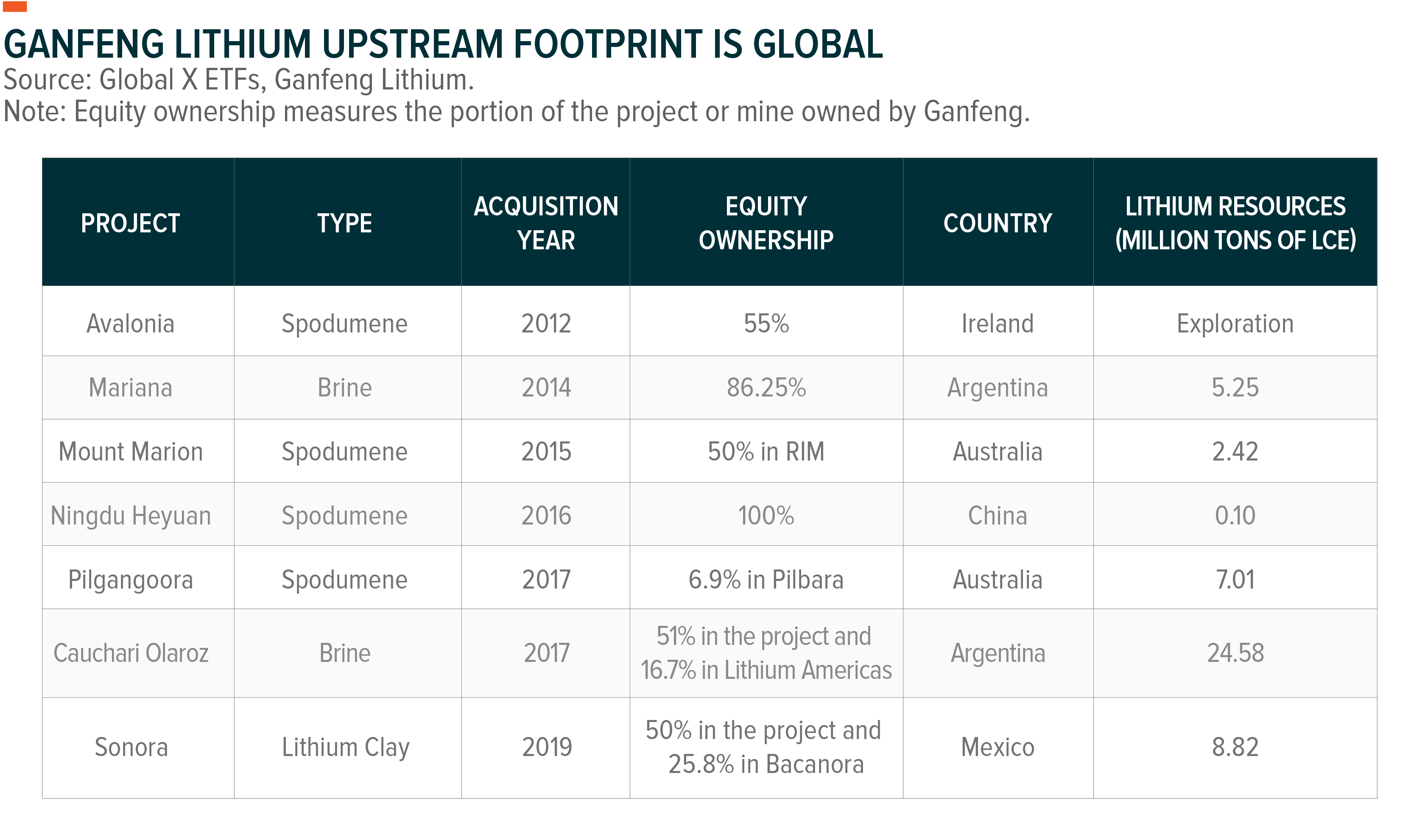 The company boasts long-term supply contracts with major battery producers and OEMs like Tesla, Panasonic, LG Chem, Volkswagen, Samsung, and, recently, BMW. Helped by the predictability of these contracts, Ganfeng expects to double its capacity from 100,000 metric tons in 2020 to 200,000 by 2025.4 Given the growth potential of EV sales, OEMs and battery producers are likely going to enter additional offtake agreements to secure access to lithium. This surging demand should help companies like Ganfeng secure long-term contracts at higher prices.

With more than 100 years of history, Japan’s Panasonic is the world’s third-largest supplier of EV batteries.7 The company is considered a Tier 1 lithium-ion battery producer according to Benchmark Mineral’s classification standards.8 The designation means that the company produces the highest-quality lithium-ion batteries, for automotive uses.

To date, Panasonic is the sole provider of lithium-ion batteries to Tesla for EVs manufactured in the U.S. But Panasonic is also expanding its EV battery customer base beyond Tesla. The company recently partnered with Toyota to build a lithium-ion plant in Japan to supply 500,000 EVs starting in 2022.11 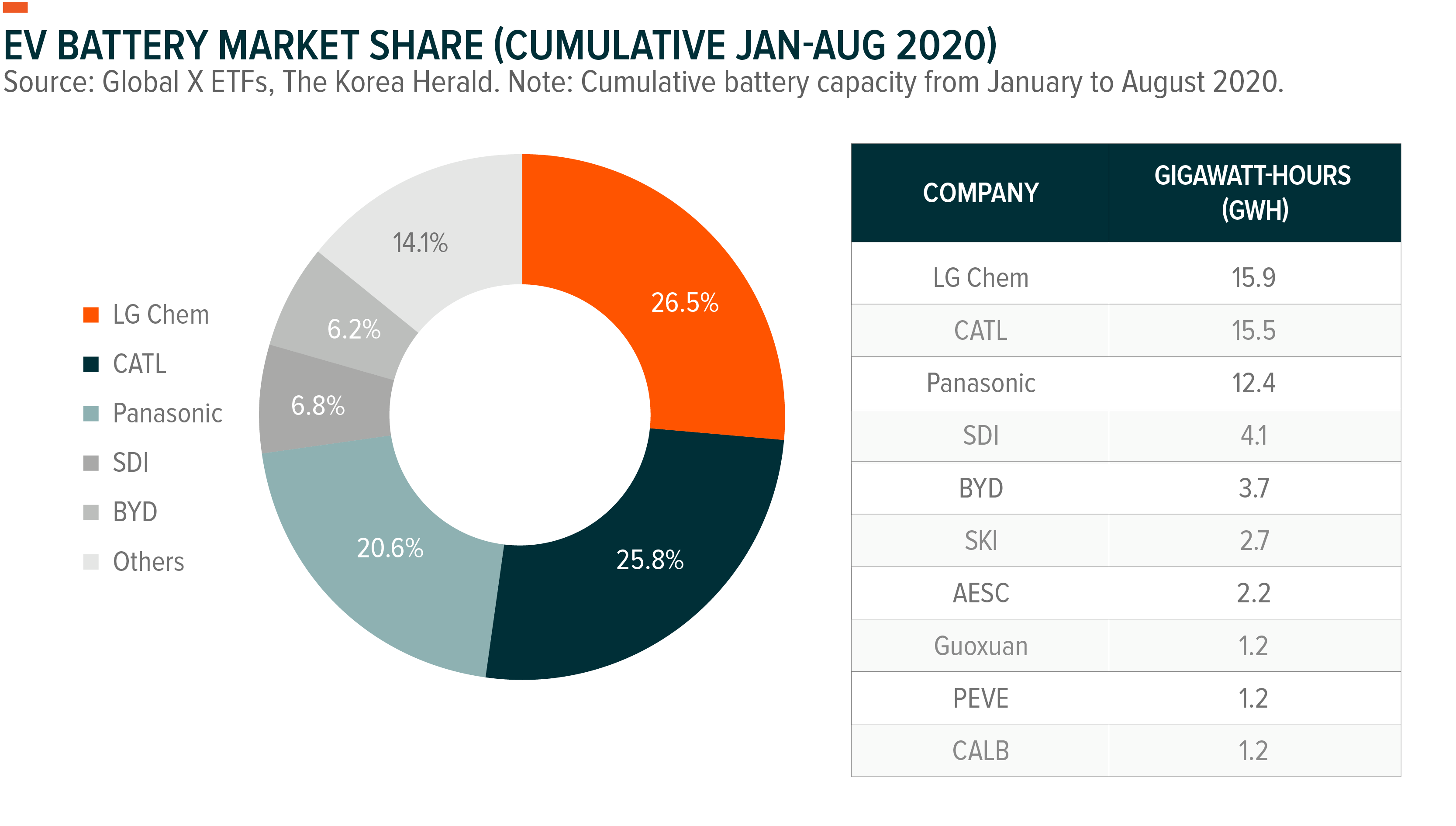 Livent: Focused on Lithium for the Next Generation of Batteries

Livent, which was spun out of FMC Corporation in 2018, is a Philadelphia-based company with a lithium history that dates back to the 1940s. Compared to the other large Western players, namely Albemarle and SQM, which own and operate some non-lithium businesses, Livent is a pure-play company focused only on lithium. 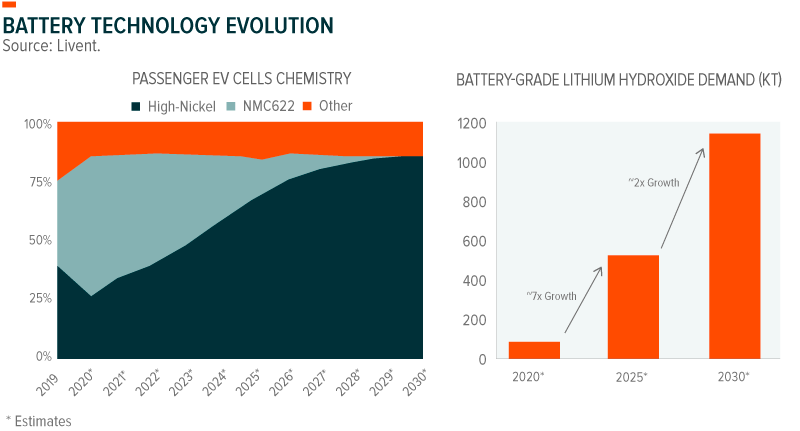 Livent is known for its relationship with Tesla, being one of its main lithium hydroxide suppliers. In November, the company announced the extension of a multi-year supply agreement with Tesla through 2021, with a commitment to deliver greater volumes than in 2020.14 Management also indicated that they are working to extend their partnership for 2022 and beyond.

CATL is the world’s second-largest battery producer, behind LG Chem. CATL is a Tier 1 battery producer, joining the select group of LG Chem, Panasonic, Samsung SDI, Tesla, SK Innovation, and AESC.16 What distinguishes CATL is that it is the battery maker with the largest number of relationships with OEMs, including Tesla, BMW, Daimler, Geely, Great Wall, Honda, Hyundai, Volkswagen, and NEVS.

Tesla is a key relationship for CATL. In February, the two companies agreed to produce batteries for EVs manufactured at Giga Shanghai, Tesla’s second battery megafactory.17 Tesla is currently producing Model 3’s at an annualized rate of 250,000 EVs.18 Helped by CATL’s cobalt-free lithium iron phosphate (LPF) batteries and local procurement, the Model 3 is the lowest priced premium mid-sized sedan in China at $36,800.19, 20, 21

Recently, CATL also announced a project to roll out a “million-mile” battery that costs less than $100 kWh by 2021.22 Such a battery could support decades of heavy use for an EV, well beyond the lifespan of an internal combustion engine vehicle.

CATL’s relationships with OEMs across multiple regions, especially those in the Chinese and European markets, should allow the company to remain a key player in the EV supply chain. CATL is positioned to continue to grow as EV demand recovers from the economic fallout from COVID-19. Recent reports from the China Association of Automobile Manufacturers show that new energy vehicles sales, which include EVs, increased 105% year-over year in October 2020.23 Sales totaled approximately 160,000 during the month, marking the fourth consecutive month of gains.24

While sales data in China is notable, it’s Europe that’s eventually projected to command the greatest share of EV sales growth. According to research firm Rho Motion’s estimates, EV sales in Europe could double by the end of 2020 from 2019 due to significant policy support from European regulators. 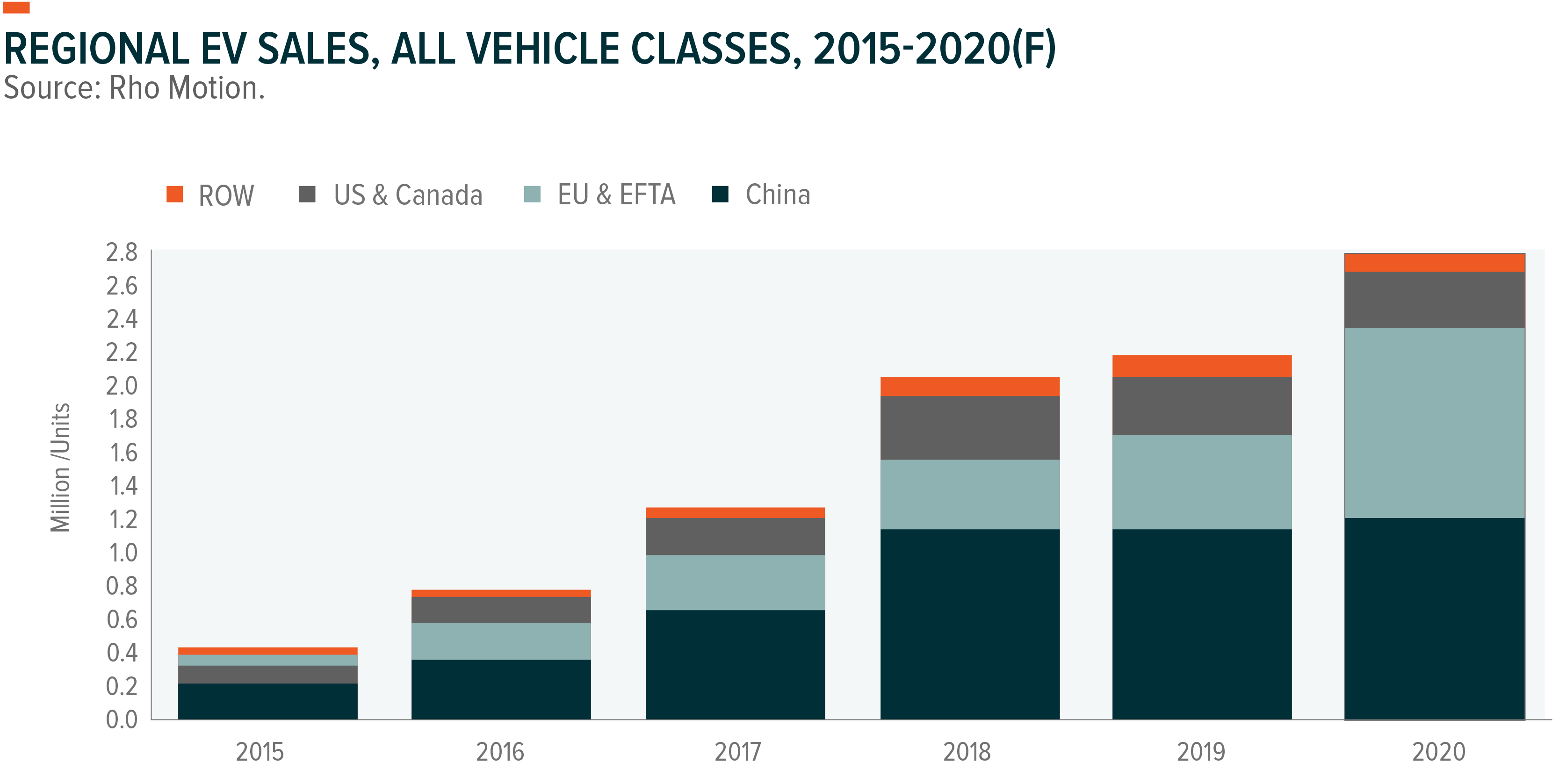 The four companies highlighted here represent key aspects of the lithium and battery technology ecosystem. But beyond these firms, there are still dozens of other lithium miners and battery producers around the world, who together an enabling the rapid growth of electric vehicles. While many of these firms are relatively unknown by most investors, they could ultimately replace major energy corporation as the next generation of transportation transitions away from fossil fuels.

5. Note: NMC 811 or lithium ion batteries with a cathode composition with 80% nickel, 10% manganese, and 10% cobalt, are new generation batteries that can generate greater energy density and deliver more range to vehicles. These batteries are known as nickel-rich batteries because they have more content of nickel and less cobalt and manganese. The battery industry has been improving NMC technology by steadily increasing the nickel content in each cathode generation (e.g. NMC 433, NMC 532, NMC 622, and NMC 811).

Investing involves risk, including the possible loss of principal. International investments may involve risk of capital loss from unfavorable fluctuation in currency values, from differences in generally accepted accounting principles, or from economic or political instability in other nations. Emerging markets involve heightened risks related to the same factors as well as increased volatility and lower trading volume. Narrowly focused investments may be subject to higher volatility. There are additional risks associated with investing in lithium and the lithium mining industry. LIT is non-diversified.Shares of ETFs are bought and sold at market price (not NAV) and are not individually redeemed from the Fund. Brokerage commissions will reduce returns.