Greece’s Banks: What’s Behind the Struggle?

It’s no secret that Greek banks have been under pressure for the better part of a decade, contending with the effects of a deep economic recession as the country works through its excessive debts. While the Greek equity markets have managed to rally over 20% so far in 2017, returns for the nation’s banking sector are largely flat and have demonstrated intense volatility around news of potential asset quality reviews or stress tests.1

We believe this underperformance and bouts of volatility stems from the market’s intense scrutiny of Greek bank assets. Greek bank assets are particularly difficult to value given that they face significant non-performing loan (NPL) issues, meaning many loans are in default and the banks (and the market) are attempting to calculate how much they expect to recover of their principal. Based on how the banks are carrying these loans on their balance sheets, they believe they can recover on average just over half of the assets that they have designated as non-performing. But the banks currently trade at a 75% discount on average to their tangible book value, implying that the market predicts only a 12% recovery of these assets.2 Theoretically, if the market believed that the banks’ estimates of their assets and recovery levels were correct, the banks’ shares would trade close to their tangible book value. 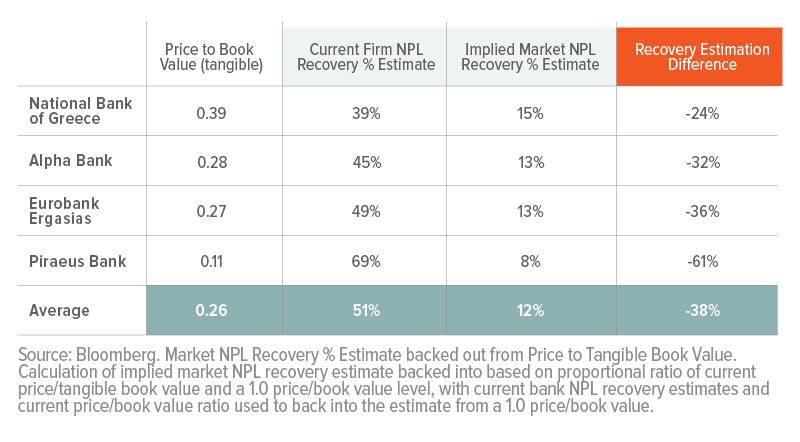 While this analysis is quite simple, as it assumes a bank’s assets are the only driver behind its share value, it can still give an idea of the differences between official bank expectations and the market’s opinion. If the market is correct about the lower NPL recovery levels and/or other assets that have not been designated as impaired, there could be potential negative downstream effects like another recapitalization that would dilute current shareholders. Other possibilities could include splitting bank assets into separate entities that hold either toxic or non-toxic assets. More regulatory oversight of banks could also result. If the banks are correct about their NPL recovery rates, it could signify a severe underpricing of Greek bank shares, meaning there is a major value opportunity in the sector.

GREK: Global X MSCI Greece ETF invests in among the largest and most liquid companies in Greece.

Toxic assets: Toxic assets are extremely illiquid assets that have lost a significant amount of their value and for which there is no effectively functioning market. Markets for these assets are difficult to transact in.

Carefully consider the Fund’s investment objectives, risks, and charges and expenses. This and other information can be found in the Fund’s full and summary prospectuses, which may be obtained by calling 1-888-GX-FUND-1 (1.888.493.8631), or by visiting globalxfunds.com. Please read the prospectus carefully before investing.

International investments may involve risk of capital loss from unfavorable fluctuation in currency values, from differences in generally accepted accounting principles, or from economic or political instability in other nations. Securities focusing on a single country may be subject to higher volatility. Greece’s ability to repay its sovereign debt is in question, and the possibility of default is not unlikely. GREK is non-diversified.