Below is a summary of this report as well as additional information on the performance and trends within the US hedge fund industry. 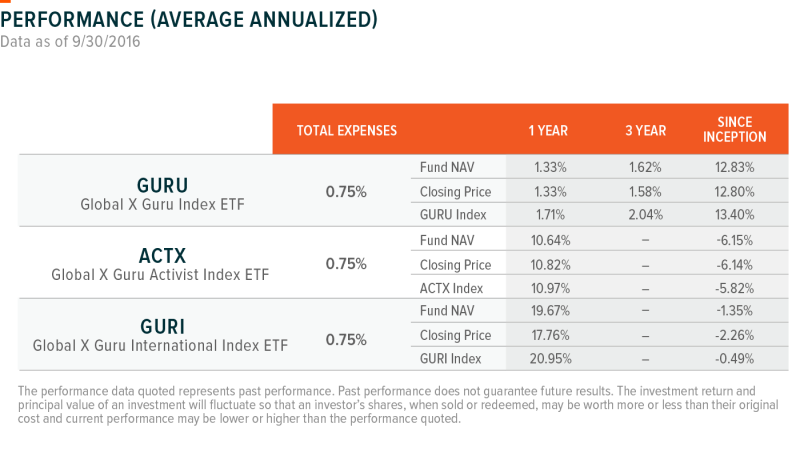 Performance data current to the most recent month- and quarter-end can be found at the following links: GURU, GURI, ACTX.

High conviction hedge fund picks in the health care sector, particularly in biotech, had been battered over a heightened likelihood of increased regulatory controls on drug prices. Many hedge funds remained confident that the market was mispricing these stocks, and held steady on their biotech holdings. This resolve was ultimately rewarded as GURU’s health care stocks have rallied 18% since GURU’s May rebalance, while the S&P 500’s health care sector has been down -1.4% during this period.1

On the international side, markets experienced greater ranges of performance dispersion as major Western European markets sold off while commodity exposed Developed and Emerging markets led the way. GURI’s overweight positions to Canada and Brazil, nations with higher than average commodity exposure, proved beneficial, as these positions generated nearly 80% of the fund’s outperformance.1 A stronger global macro backdrop, improving commodities outlook, and constructive monetary policy drove returns in these markets after a prolonged slump.

While the industry has faced challenges ranging from fee pressures to periods of underperformance, hedge funds still remain uniquely positioned to potentially generate alpha due to their deep talent pool and ability to make high conviction investments. Direct investments into hedge funds, however, often requires paying high fees and entering into lock-up periods that reduce liquidity. We believe that a more liquid, tax-efficient, and cost-effective vehicle like an ETF can be preferable exposure to high conviction hedge fund investments.

Investing involves risk, including the possible loss of principal. The 13F filings used to select the securities in the Underlying Index for each fund are filed by each hedge fund approximately 45 days after the end of each calendar quarter. Therefore a given hedge fund may have already sold its position by the time of the 13F filing. For GURU, the fund’s manager has the ability to employ up to 20% leverage, which may accelerate the velocity of potential gains or losses. The funds may invest in small and mid-capitalization companies, which have greater volatility and less financial resources than large-capitalization companies. Furthermore, the funds may hold foreign securities which are subject to different risks than domestic securities, including foreign currency fluctuation, different financial and accounting standards, and political instability. Investments in the securities of foreign issuers (including investments in American Depositary Receipts (“ADRs”)) are subject to the risks associated with investing in those foreign markets, such as heightened risks of inflation or nationalization. The Funds are non-diversified.

Shares of Global X Funds are bought and sold at market price, not NAV, and are not individually redeemed from the fund. Buying and selling shares will result in brokerage commissions.

The Funds are obliged to distribute portfolio gains to shareholders by year-end. These gains may be generated due to index rebalancing or to meet diversification requirements. Trading shares of the Funds will also generate tax consequences and transaction expenses.

Carefully consider the Fund’s investment objectives, risk factors, charges and expenses before investing. This and additional information can be found in the Funds’ summary or full prospectus, which may be obtained by calling 1-888-GX-FUND-1 (1.888.493.8631), or by visiting www.globalxetfs.com. Read the prospectus carefully before investing.