On January 13th, we introduced the Global X Adaptive U.S. Risk Management ETF (ONOF) on NYSE. ONOF seeks to provide a risk management solution by employing four technical indicators to dictate whether the Fund is participating in the U.S. equity markets or in a defensive stance in short term treasuries.

What is the U.S. Risk Management Index’s strategy and how does it work?

The core goal of the strategy is focused on risk management, while a secondary goal is to remain invested in equities as much as possible. The strategy is designed to maintain exposure to the equity markets when the trending environment is positive, and then move to a risk off position when that trend reverses. Determination of the trending environment utilizes four different indicators. Our concept employs a moving average, drawdown, moving average convergence divergence (MACD), and volatility as indicators to move between equity and fixed income (“risk-off”) exposure. The end goals of the strategy are to remain invested in equities as much as possible, achieve a low tracking-error, have minimal internal expenses, provide significant risk mitigation, while still producing alpha generation.

What are the four signals that determine whether the strategy holds equities or not?

Why utilize four signals instead of just one or two?

One of the alternative goals in the strategy is to avoid a whipsaw effect caused by false-signals as much as possible. As with any trend-following models, the potential to exit and enter the markets at the wrong time certainly exists. The strategy relies on a confirmation of signals instead of relying on just one indicator. We feel this has two main positives compared to strategies which rely on just one indicator. The first positive is the potential ability to exit the equity market earlier in a risk-off environment. The second positive is the potential ability to remain invested more of the time. As the strategy relies on a confirmation of three out of the four indicators to exit the equity markets, there is a higher hurdle to be reached to make a risk-off decision. It will also be quicker to react to a positive changing environment as two of the exit indicators turn back to positive. 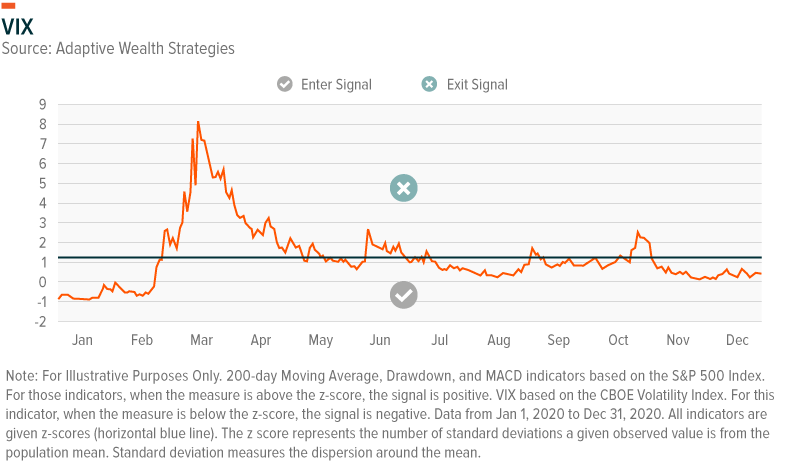 Which market environments do you expect this strategy to work well in?

We believe this strategy should work well in three environments and potentially struggle in one.

How does the strategy fit in a portfolio?

This strategy could fit well into the part of the portfolio where the manager would ordinarily look to trim equity exposure during risk-off environments. As this strategy is housed inside an ETF, the tax implications of selling equities to move to treasuries are potentially reduced. This helps the manger both reduce risk and potentially limit taxable gains. This is a great complement to broad core allocations, as this will act as a risk reduction tool inside the portfolio.

ONOF: The Global X Adaptive U.S. Risk Management ETF (ONOF) seeks to provide a risk management solution by employing four technical indicators to dictate whether the Fund is participating in the U.S. equity markets or in a defensive stance in short term treasuries.

Investing involves risk, including the possible loss of principal. There is no guarantee that the Fund will achieve a high degree of correlation to the Underlying Index and therefore achieve its investment objective. Market disruptions and regulatory restrictions could have an adverse effect on the Fund’s ability to adjust its exposure to the required levels in order to track the Underlying Index. The Fund is based on the “modern portfolio theory” approach to asset allocation, which is a framework for determining the allocation of a portfolio with the goal of achieving an intended investment outcome based on a given level of risk. This framework relies heavily on the anticipated volatilities, investment returns and correlations of particular
asset classes or securities. There is no guarantee that the Underlying Index will outperform any alternative strategy that might be employed in respect of the component assets or that past volatilities and correlations of particular asset classes or securities will be indicative of future results. ONOF is non-diversified.

Global X Funds are not sponsored, endorsed, issued, sold or promoted by Adaptive Wealth Strategies® (AWS), nor does AWS make any representations regarding the advisability of investing in the Global X Funds. Neither SIDCO, Global X nor Mirae Asset Global Investments are affiliated with AWS.

Carefully consider the fund’s investment objectives, risk factors, charges, and expenses before investing. This and additional information can be found in the fund’s full or summary prospectus, which may be obtained by calling 1.888.493.8631, or by visiting globalxetfs.com. Please read the prospectus carefully before investing.